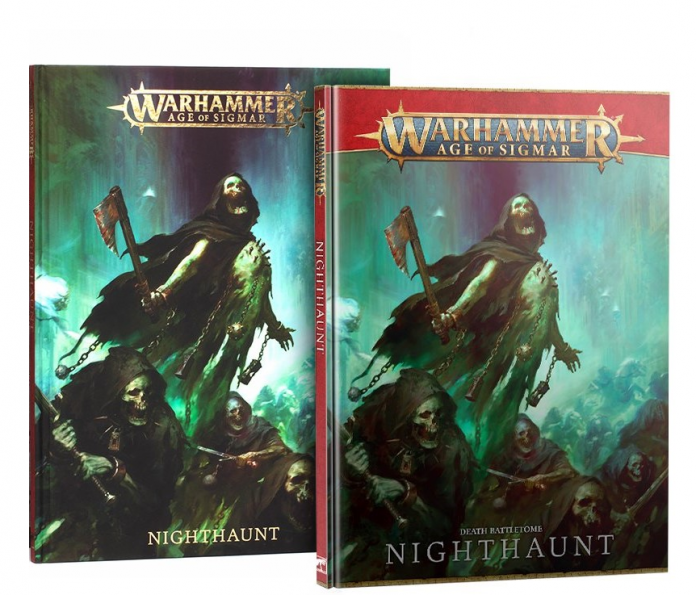 The Nighthaunt are spiteful malevolent spirits, sent ahead of Nagash’s forces to clear the way and claim souls. However they don’t possess a lust for territory or a will of their own. So how do you represent the grim forces of the Nighthaunt in a “Path to Glory”? By changing the nature of the battlefield.

Haunters of the Realms – During deployment the Nighthaunt player can select up to 3 different Nighthaunt units to haunt up to three different pieces of terrain. Rather than deploy on the battlefield, these units are set to the side and can emerge later in the game. If the terrain is destroyed before they emerge, the unit is considered slain. This is awesome as the units only have to emerge greater than 3″ from enemy units and because it’s an incredible way to evoke the idea that Nagash’s minions are already there, already everywhere, waiting for their moment to strike.

Haunters of the Realms brings that impeccable flavour of the Nighthaunt to the battlefield. That being: they were there waiting to begin with. This is a strong open and sets the tone for the evocative ways the Nighthaunt player gets to affect the game.

Haunted Territories – Nighthaunt Territories can also be haunted in various ways. While a high roll on your exploration role can reveal an already-haunted territory (more on those later), Nighthaunt players also have various ways to haunt a standard territory. There is even a way for your opponent to exorcise one of your haunted lands, returning to an unhaunted state!

Haunting territories benefit the Nighthaunt but it’s good to remind them that you ain’t fraid of no ghosts. It’s great to see the option for other campaign players to interact with each other. Exorcising the Nighthaunt’s haunted territory could make a great story for a game. You could even build a campaign around this feature as the other players venture into the lands of the dead to return it to glory.

Souls for Shyish  – The most common way that you will haunt territories comes via this Quest. Earn enough points and you can replace one of your existing Territories (from the Core Book) and replace it with the Nighthaunt’s Haunted version.

Souls for Shyish seems straightforward. You’re going to want to accumulate those haunted territories and this is going to be a more reliable way to do it.

Hatred of the Living – A clever little quest that feels multi-layered. Earn a few points and you can embark on either of the two included Battleplans. One of them allows the Nighthaunt player to haunt a territory on a win, but on a loss you lose quest points and this quest does not count as completed. The other Battleplan’s reward is a free upgrade for one of your heroes at the risk your opponent gets to Exorcise one of your lands.

Hatred of the Living is for the adventurous. If you’re willing to put your ‘life’ on the line for more glory, more territory and more upgrades. Quests like these catapult you forwards in a campaign, but losing progress can be a bit of a feel bad. You’ll get some memorable stories out of your spectral legions seizing glory at the last moment, or suffering banishment back to Shyish!

Feed on Terror – This quest rewards you for Terrifying your opponent’s units during battle. You’ll need quite a few points but when you succeed you’ll be able to grant every Summonable Nighthaunt unit you bring to the battle a Veteran Ability they can use once in that battle. Quite the crescendo.

Feed on Terror changes the game for the Nighthaunt player. It adds a bonus challenge to your battleplan. Terrifying your opponents’ armies gets you a thematic payoff.

Ethereal Rising – A long-term quest that requires victories and haunting quite a few territories. Once successful, in your next game you can return a Summonable model to its unit at the beginning of each of your Hero phases.

Ethereal Rising is for the long game, for the calculated general with years of undeath on their side. Bide your time, win your battles and spook up those territories you get to flip the war of attrition. This ensures your units rise up through reanimation. I can see this being a great, forgiving pick for the newer general too who’s still figuring out their army.

Cunning Frighteners – A useful ability that extends the range at which you terrify enemy units! Combine with your ability to emerge from terrain for great fun.

Spectral Juggernauts – A handy ability to add a boost to your charge rolls.

Favoured of Nagash – The lord of souls deigns to cast his attention on your army, granting this unit a once-per-battle Ward of 4+.

Champions of Olynder – Once per battle an unmodified attack roll of 6 with a melee weapon does D3 mortals!

Shrieking Reapers – This ability allows you to tweak the Wave of Terror table abilities granted by your army abilities, causing each level to trigger with a lower die roll.

Punishers of the Brave – Improves your save to 3+, good for when you want to see the light in your opponent’s eyes dim as they impotently swing their weapons through your astral form.

As noted above, the Nighthaunt’s faction territories are all Haunted versions of territories from the Core book. While they can’t be upgraded, they do provided a better benefit than the base level of the Territory and come with a small perk. Do note that if you haunt an upgraded territory you no longer gain the upgraded benefit and if the territory is exorcised then (strictly speaking per RAW) it reverts to an un-upgraded territory.

Harassed Outpost – This spooky version of an Old Keep increases the number of Hero units you can have on your roster and gives you the opportunity to roll and avoid making an injury roll for a hero.

This makes perfect sense. Haunt an old outpost and rouse its old guardian, adding a hero to your roster. This bonus means it should be hard to hurt your heroes who’ve already shuffled off their mortal coil.

Shyshian Realmgate – Once haunted, these Ancient Roads lead straight to the realm of death. Extra Allied units and with a roll you can reduce their casualty score to 0.

It always helps to have friends, and friends that are hard to hurt are the best around. If you’re ally heavy you’re going to want a nice path for them to return to battle once they’re wounded.

Tormented Barracks – A handy little territory for folks playing a swarming list, this ghostly Small Settlement increases the number of Reinforce Units you can field and lets you reinforce one without paying Glory.

Tormented barracks is really going to speak to you if you’re a fan of those big blocks of Chainrasp Hordes. The discount on glory isn’t going unnoticed either.

Ancient Battlesite – Situated in the Borderlands, this territory allows you to roll 3d6. Each 6 lets you give a unit that didn’t fight in the battle renown, or add points to your Hatred of the Living Quest.

This is a nice touch because it’s not quest-specific. Even if you’re not on the Hatred of the Living Quest this helps you level up your less participative units. Here’s hoping for sixes!

Cursed City of Order – Get bent Sigmar! Once claimed for the God of Death, this Large Settlement makes adding non-heros to your roster cheaper and gives you the chance to reduce a unit’s casualty score to 0. Fresh souls for the soul god.

You know we’re big fans of elements that incorporate other factions and their worlds. Great opportunity to add some Order terrain into your battles, don’t forget to haunt it though!

Soul-Infested Slums – This one represents the largest departure from its base territory (Ruins of Myth). The Slums give you the opportunity to add bonus Command Abilities to your roster.

The Nighthaunt get something a little bit different, and that’s a good thing. Soul-Infested Slums present you rewards you can’t usually access so there’s a great incentive here.

Only one option for the Nighthaunt here. Cashing in a bit of Glory and Renown allows you to upgrade a Knight of Shrouds to one on a horse.

Phantasmal Invasion – This battleplan represents a Nighthaunt invasion directly into a Stronghold. They emerge in the middle of a courtyard, ready to lay siege to two particularly important pieces of terrain. While the Nighthaunt deployment zone is flanked by two Defender territories, only one is used for deployment making it a challenge for the defender to defend both siege targets. Victory for Nagash means haunting a territory and making all your Haunted Territory rolls better. Lost sets you back on your quest.

This battleplan reminds you that a Nighthaunt attack can come from anywhere. You start in the centre of the board while your opponent can only choose one target to defend. It’s a tension-filled game for the defender whilst tempting the Nighthaunt player. Strike fast and charge or slink into the shadows and sabotage the target?

Once again that flavour is coming in strong with this battleplan. A hidden objective game leaning into that theme of spectral predation we’ve seen throughout the ruleset. It’s a high stakes mission that can surge you forwards or set you back. There’s a great opportunity to model a coward here for either player though!

I love this Path to Glory set. The ability to haunt terrain is both evocative and effective, and the quests and battleplans all flow together in a grand narrative. This feels like the kind of stuff that can be used to lay the underlying narrative for your group’s entire Path to Glory campaign not just the Nighthaunt player’s.

The Nighthaunt came away with a fun ruleset here. Haunters of the Realms feels fun and flavourful. Haunted Territories allow players to interact with your territories in a meaningful way. Combined with fun upgrades the Nighthaunt emerge as the true boogeyman of your narrative campaign. Two spooky thumbs up.