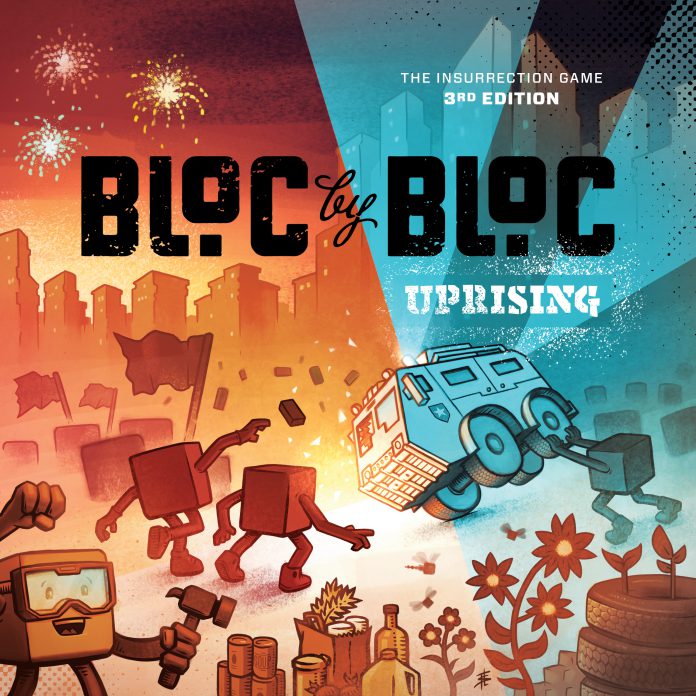 Words have power, but by themselves they are not imbued with ethical, moral, or emotional portent. A word’s potential to do good or harm comes from who wields it, and when, how, or why. Words inspire, incite, can be banned or reclaimed, but words are not motivational speakers, or hamhanded censors, or violent oppressors. A word is largely at the mercy of the person who uses (or misuses) it.

Words play a central role in Out of Order Games’ new 3rd Edition of Bloc by Bloc: Uprising. The language that Uprising draws from is taken directly from the people, structures, processes, and tactics of revolution and protest, from actual global movements and events in recent history. (Playing games of Bloc by Bloc 2nd Edition in 2020 during the pandemic lockdown and amid unprecedented, widespread protests was a complicated and illuminating experience.) [Editor’s Note: This original review of Bloc by Bloc is well worth your time to read or reread.]

Those familiar with the 2nd Edition will find their bearings quickly when setting up Uprising. Designers T.L. Simons and Greg Loring-Albright have retained the sturdy Bloc by Bloc foundation, mechanics, and gameplay. The game is still played on a 5×5 tiled grid representing an unnamed Every City that’s top-heavy with the usual suspects of gross injustice (such as the Supermax prison, and Immigrant Detention Center). Players still team up to organize, loot, occupy and liberate these corporate and carceral and capitalist eyes of Sauron. Players still directly clash with police (on my back) by building barricades and toppling the occasional militarized van if the dice are kind.

Below are the changes and new features of the 3rd Edition (now crowdfunding via Gamefound) from the 2nd Edition (released in 2018):

• Manifestation Cards are now Liberation Cards. This is a great new tweak found in Uprising. In both versions the city grid is seeded with randomized cards under each tile. The card under each tile provides a boon when liberated. In 2nd Edition these were Manifestation cards. In Uprising they are now called Liberation cards, award more robust benefits, and are in stronger narrative and thematic alignment with the game’s ethos. 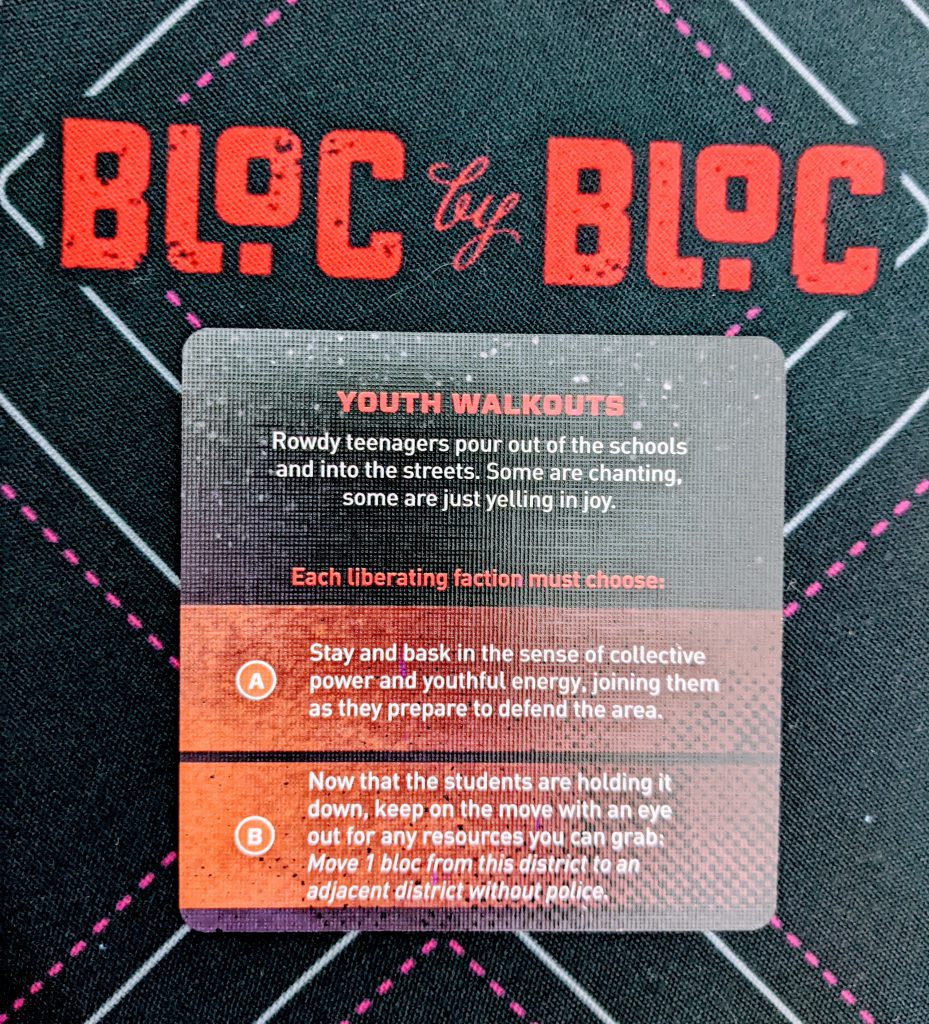 Liberation Cards are always good, but now 1) they only affect players that have at least one faction cube present on a tile at the time of its liberation; and 2) they include short, “Choose Your Own Adventure” prompts that are read aloud, whereby each player determines their fate (and bonus). Fifty different stories and outcomes can play out, and these flash fictions (written by author Margaret Killjoy specifically for the game) are emotional grace notes amid the game’s epic, urban scale.

• Solo and semi-coop modes. Solo mode has 1p playing two factions. With the added features in Uprising there’s much more depth and strategy for the solo player. In semi-cooperative mode each player is dealt a secret Agenda Card. Most agendas are the same win conditions as full coop, but two Agendas only allow one player to win and only if they liberate a certain number and type of block (two State or three Public). It’s a social deductive fog of war amid the tear gas.

• Reaction cards. These double-sided cards randomly affect the game state during the round (maybe the subways aren’t running tonight) and then are flipped at the end of the round to trigger police van movement throughout the city.

• Conditions Cards (aka Meeting Cards). This introduces a new action (attending meetings) and victory condition (a sort of liberation “quest”). The game starts with a visible, double-sided condition card showing a specific city tile that must be liberated. Any player can satisfy a condition card, but each player must satisfy one condition card for a full coop victory. The card backs are meetings with open slots to place cubes. As an action a player can send one or more faction cubes from one block to the meeting card as an action. At the end of the round if there are more cubes on the meeting card than face up Conditions, then a new Condition can be revealed. More Conditions can be revealed than are required, but this complicates things since subsequent Conditions require more cubes to be spent at more meetings. 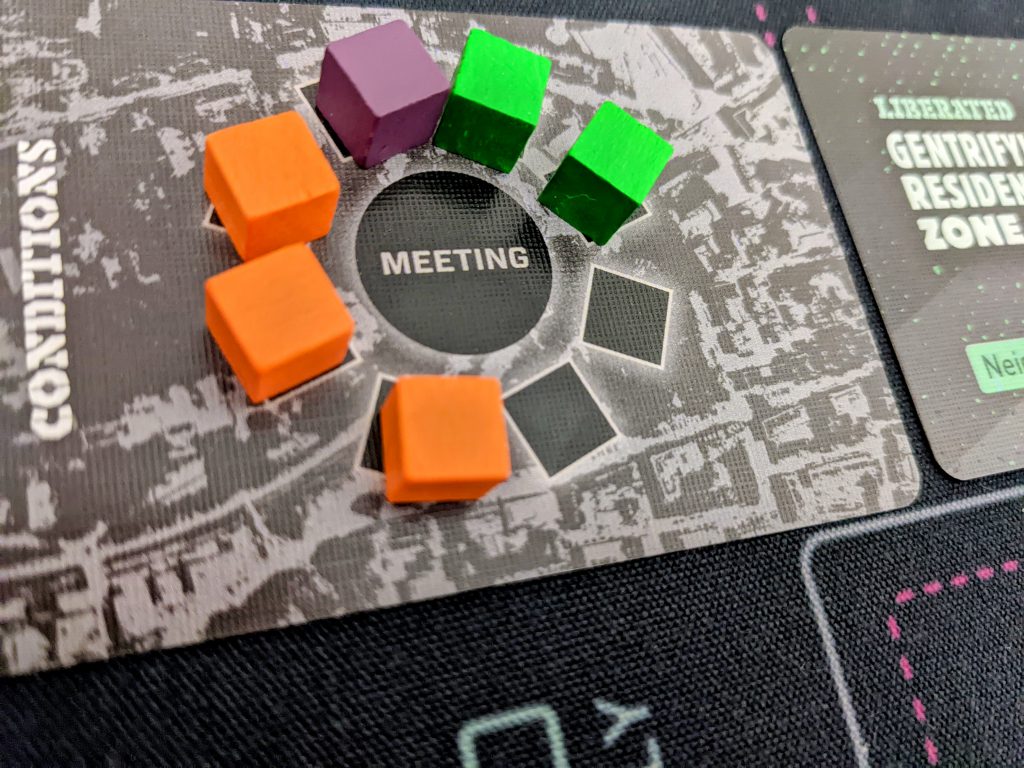 • Mutual Aid. From the community fridge to community members helping out individuals in need, mutual aid is a mainstay of organized movements and now they are laced into Uprising. It buffs the Loot action by using neighboring graffiti tokens as modifiers which gains players more loot per Looting action.

• Action dice can be combined for stronger actions. Each action die you roll still normally grants one action (move, barricade, loot, occupy, clash with police), but now dice can be combined and summed for higher die values. This provides flexibility and more certainty when trying to occupy stronger blocks (or tip over police vans), but also reduces the total actions you take in a turn.

• The reaction die has been eliminated and police movement is now split between the beginning and end of player turns. The cops’ trolling is spread more evenly between Police Ops cards (which dictate unit movements at the beginning of each turn) and the new Reaction cards (which prompt van movements at the end of each turn). And because the Police Ops phase now happens at the beginning the turn instead the end, players can react to police movements during their turns and make more tactical decisions and strategic tradeoffs.

Bloc by Bloc: Uprising has never not been relevant and prophetic across three iterations over its six-year printing history (2016 to the present). In fact, Bloc by Bloc’s lifespan only knows a political and cultural era where an incompetent businessman revealed himself to be a monstrous demagogue and rose to power in the United States by embracing authoritarianism and saying the quiet parts (white supremacy) at full volume.

It’s ironic that the 1st and 2nd Editions of Bloc by Bloc were subtitled “The Insurrection Game.” Because Bloc by Bloc: Uprising now exists in a time where the word “insurrection” took on unintended resonance since January 6, 2021, when it was misappropriated by 10,000 white supremacists who clambered onto and into the US Capitol to commit sedition against their own country. The same people who then tried blanching the word “insurrection” of all original meaning by misinterpreting it as their own brand of toxic, performative, patriotism. Insurrection as satire, or as shitpost.

It’s just as well that the third edition of Bloc by Bloc is subtitled “Uprising,” because in 2022 ideas and causes are often an eruption (or disruption) of words. And in Bloc by Bloc: Uprising, words matter. From the factions you adopt (Workers, Students, Neighbors, Prisoners) to the Liberation stories you tell (”People’s Kitchen” or “Guerrilla Gardens” or “No Justice, No Peace”) to the graffiti that you spray on the walls (”Smash the State” and “Our Streets” and “ACAB”). 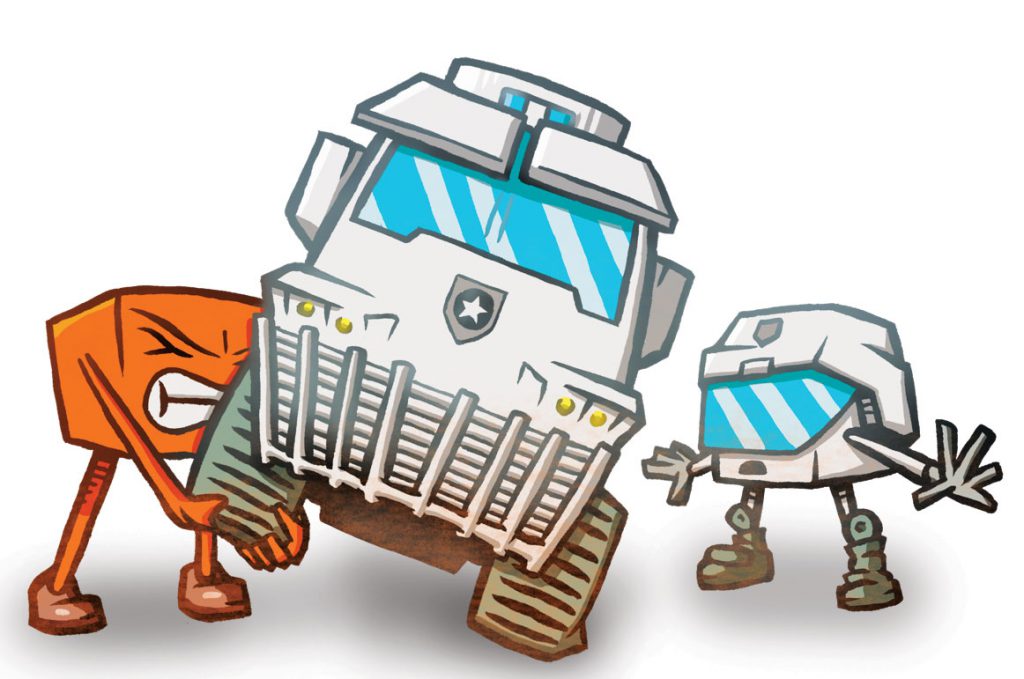 Bloc by Bloc: Uprising retains all the feel and flex of the 2nd edition. But it’s not just a fresh coat of spray paint. The same angry graffiti is still on the walls, and the beleaguered city is still under siege by the authoritarian (police) state. But with the changes made in this V.3, Bloc by Bloc: Uprising is a definitive answer. It adds a deeply personal, emergent narrative to its drone’s-eye view of protest and rebellion. And Uprising doesn’t sell out its core mechanics or core values to do it – it consolidates and strengthens the allegory (documentary) even further. And does so beautifully with the transcendent, transformational power of its words, reclaiming them for those of us standing on the better side of history.