Fouling has always been one of the most satisfying actions in Blood Bowl, and in Blood Bowl: Second Season Edition it received a couple of interesting buffs.  In this article we’re going to look at both the new and old mechanics of fouling and give you the tactical lowdown on its application, so that your sneaky gits can operate with all the precision of a brain surgeon.

There are then three mechanics to the foul:

Breaking Armour This works just like an armour roll after a knockdown from a block. You roll 2d6 and attempt to match or beat the target’s AV number. The roll is modified by the following factors:

So, assuming you managed to break armour, you now get to the fun bit. Injury is determined in exactly the same way as it is from blocks, which means a 2d6 roll on the injury table. For fouls there is only one skill that can affect the result: if the fouler posses Dirty Player, assuming it was not used to help break armour, it can be used to add its rank  to the roll.

For reference, without any modifiers, a foul has a 58% chance to stun, 25% chance to KO, and 17% chance to Cas.  Remember Stunty players use a different injury table with higher odds of greater damage.

Injuries caused by fouls are subject to the same mitigating skills or responses as other injuries, so if the target has Thick Skull they will be KO’ed less, if they have Regen they may regenerate from an injury they suffer, etc.

It’s all well and good putting the boot into prone opponents, but unfortunately even in the violent world of Blood Bowl it is against the rules, which means the referee may send the fouler off. This chance is determined by the previous two rolls we have discussed. A double of any kind, be it on the armour roll or injury roll, means the fouling player is ejected for the rest of the game. Obviously you are more likely to have your player ejected if you break armour, because you are rolling twice.

There is one skill that affects this process – Sneaky Git. Sneaky Git means you are never sent off if you roll a double on the attempt to break armour.  So only a double on the injury roll risks being sent off. This means you can foul a bit more speculatively (i.e. take a punt at that Treeman with no assists), but obviously increases your fouler’s TV, which we’ll come to later.

The possibility of being sent off means fouling as a tactic becomes a huge risk/reward proposition. You might well crush that defenceless Goblin’s head with your boot, but it might mean your killer Chaos Warrior also leaves the game. Worse, you might only stun the little guy, and still lose your own player for the whole game.

A final mechanical point – there are no SPP’s gained for injuries caused by fouling (unless the Fouling Frenzy Prayers To Nuffle Result is in play).

There is one final and very important point to mention – if your player is sent off for a foul, it is a Turnover. This means if you are planning on scoring, or doing anything else important, you need to consider the risk that a foul might prevent that.

Arguing the Call and Bribes

If one of your players is sent off for fouling, you have a couple of options available to save them from the sin bin.  Firstly, you can intervene personally, by Arguing the Call.  If you argue the call:

If you are fortunate enough to be in possession of a Bribe via inducements, or if you have received a free one as a result of the Get The Ref kickoff event, then if your fouler would otherwise be sent off, you may use the bribe to negate the sending off, following all the standard rules and risks associated with bribes.

BB20 brought two special variations on the mechanics described above. The first is the Black Gobbo, a star player who has been around for a while and was retooled in the most recent release.

The Black Gobbo allows teams to foul twice per turn, as long as one of those fouls is by the BG himself.  Considering he has Sneaky Git, this is not the worst use of his time, but he is rather expensive at 225K, and as we will see, this is normally a poor property to possess when determining the value of a foul.  That said, he does potentially allow for some very brutal turns, and thanks to the new Sneaky Git Mechanic he can at least escape the scene of the crime easily.

The second was the introduction of a brand new skill called Pile Driver.  This was widely seen as a rework of the removed skill Piling On, and it allows a player that has made a Block or Blitz and knocked down an opponent to immediately foul that same opponent.  For various reasons this skill is very bad.  One, it leaves the Pile Driver prone themselves, which is both dangerous and highly limiting for them.  Secondly, it is a Strength skill, and the list of players that can take Strength skills and also possess the usual qualities of good foulers (cheap, disposable) is very small.

Most people believed this skill allowed a free additional foul when it was released, but upon clarification in the FAQ it has been relegated to the ‘never take’ tier. 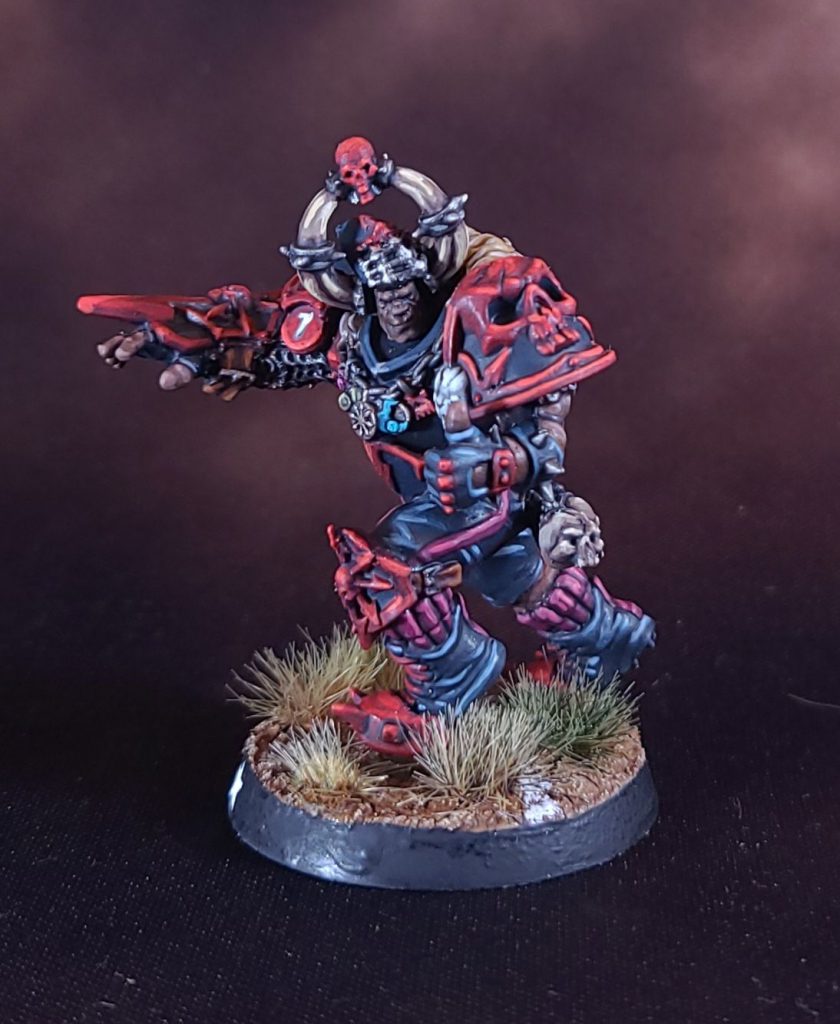 Now we come to the real meat of the matter, the knowledge and application of fouling that separates the elite coaches from the merely speculative and psychopathic.  As I mentioned above, the possibility of getting your player sent off means you have to make a decision when you foul that takes into account various factors:

The most important part of this decision to weigh up is the relative TV’s involved. If you have a low value piece such as a Zombie or Nurgle Rotter, you can generally expect your fouling target to be of greater value than your own. That means a foul, especially if you have assists and are confident of breaking armour, may well be a worthwhile risk because your own potential loss would be minimal when balanced against the potential return.

To look at a specific example of an ideal scenario, let’s imagine we have a Legend Wardancer on the floor of our cage after a failed leap in Turn 2 of the game. We have three players in base contact already, and a free, unskilled zombie ready to run up and give him a taste of the boot.

The Wardancer, loaded with skills and development as he is, is worth a whopping 250k of TV. The Zombie is worth 40k. With the assists, our target number to break armour is only 4, which means our chance of breaking armour is roughly 83%. We have a 49% chance to break armour and stun, 21% chance to break armour and KO, and 14% chance to break armour and injure. The chance that our Zombie will be sent off is 28% if we break armour. This is (appropriately for our zombie) a no-brainer scenario. It is far more likely that the Wardancer will leave the field than our Zombie, and even if he is sent off, the WD is seven times as valuable, and obviously one of the opponent’s pivotal players. Finally, it’s extremely early, not only in the game, but the half. Even if the WD is only KO’ed, it’s still likely he’ll be off the field for most of the half, and if his KO rolls are unlucky, much longer. In the best case, we injure the WD and take him out of the whole game or force our opponent to use his apothecary early. All round, it’s a great proposition.

To contrast, here’s another scenario. It’s Dark Elves vs Dwarves, Turn 7, and your Dark Elves are stalling by the Dwarven endzone and waiting to score in Turn 8. In the previous Dwarf turn, a Star Blitzer made a desperate TD-saving attempt on the ball but fell over near your ball carrier. If you decide to foul, you can get three assists while keeping your tactical shape, and you have a spare lineman who can make the foul.

In this example, the Star Dwarf is worth 140K TV, and your player is worth 70k. With your three assists, the AV to beat is 6, which gives you a 58% chance. Because the Dwarf has Thick Skull, the injury odds are changed somewhat, meaning your chance to break armour and stun is 38%, to KO 10%, and to injure 10%. The chance that our player will be sent off if he breaks armour is 25%. Weighing this foul purely on the odds, it is more likely that our player will leave the field than the Dwarf. Not good. However, factoring in the relative TV values, in which our player is worth half as much as the target, it does still perhaps have some merit. Finally, we have the game time and position to consider. This close to halftime, in the unlikely event that the Dwarf is KO’ed, he would very shortly have a chance to recover. Meanwhile we could lose a lineman for the rest of the game, and we know against Dwarves we probably don’t want to give away players if we can avoid it. But there is one more thing to consider – we are intending to stall for another turn. Will the Blitzer get another chance at the ball in the final turn? If so, even stunning him might buy us a safe TD.

As you can see, the subtleties of tactical and TV risk/reward propositions in fouling can become extremely complex. This is very much a thing that you will develop an intuitive feel for as you gain experience in Blood Bowl, but it always worth reminding yourself of the factors as you weigh up the conditions in play.  But fouling always feels good and is the purest of Blood Bowl actions, so when in doubt, stamp for glory!

We’ll be doing more regular Blood Bowl coverage here starting this week so stay tuned on Mondays for updates. If you have any questions or feedback, drop us a note in the comments below or email us at contact@goonhammer.com.