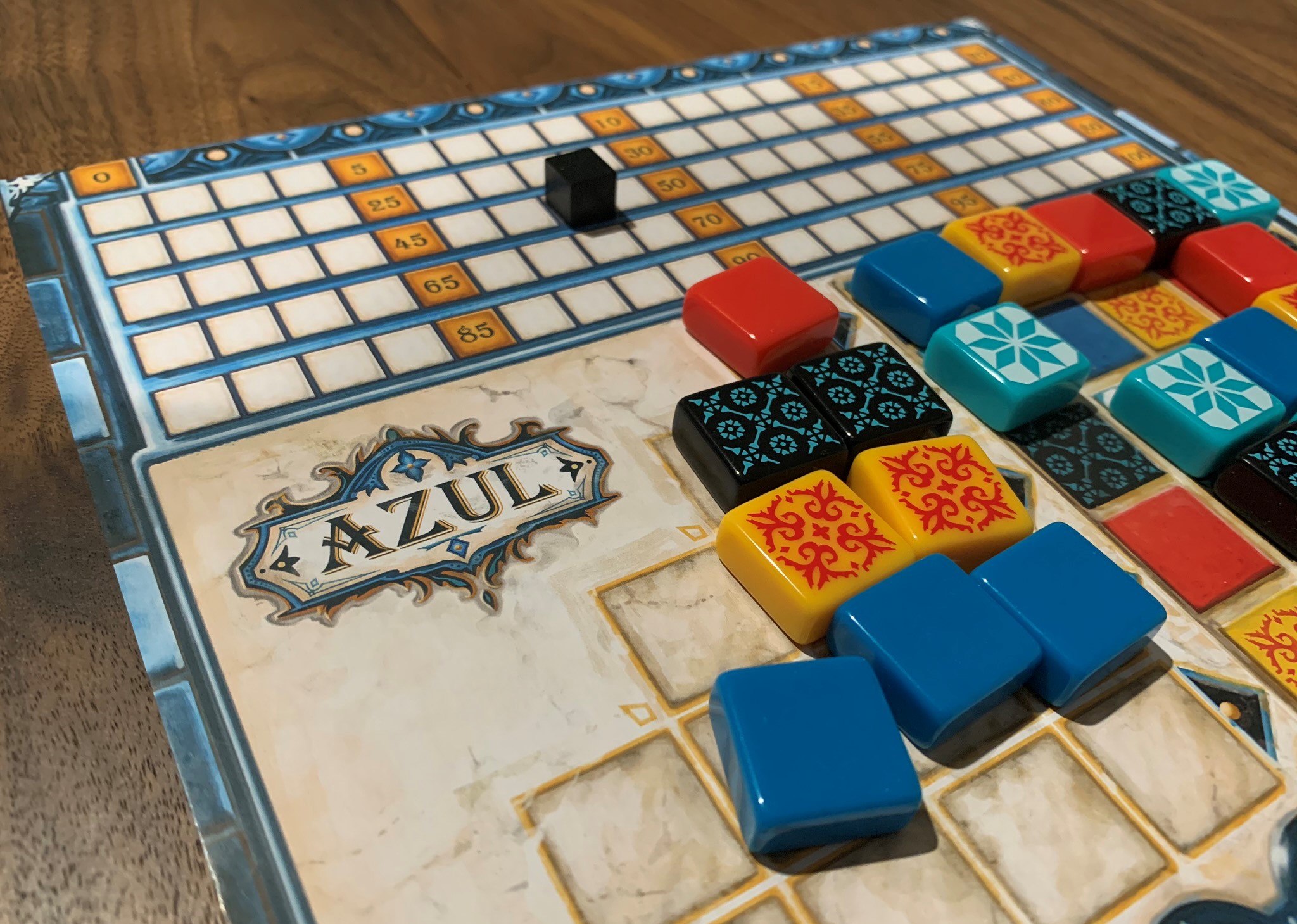 My shelves overflow with games of combat and conflict. Via miniatures or cardboard standees I have waged countless wars over kingdoms and cosmos, decided by card or by dice. However there is a small section of the shelf dedicated to games that manage to deliver a similar honed tension without any of those components or systems. Azul, 2018’s Spiel de Jahre winner, is one of those games.

In Azul you’re building a mosiac for the Royal Palace of Evora. This setting is expressed primarily through the bright bakelite tiles that will make up your mosaic, and the Portuguese ceramic inspired art that laces the entire production. These tiles will work their way to your mosaic grid where you’ll score points based on how many tiles you connect and how effectively you complete sets. While the final result is a beautiful grid—the tiles really are excellent—the bulk of this game is divorced from its setting; Azul is a modern Euro style game that borders on the abstract genre. 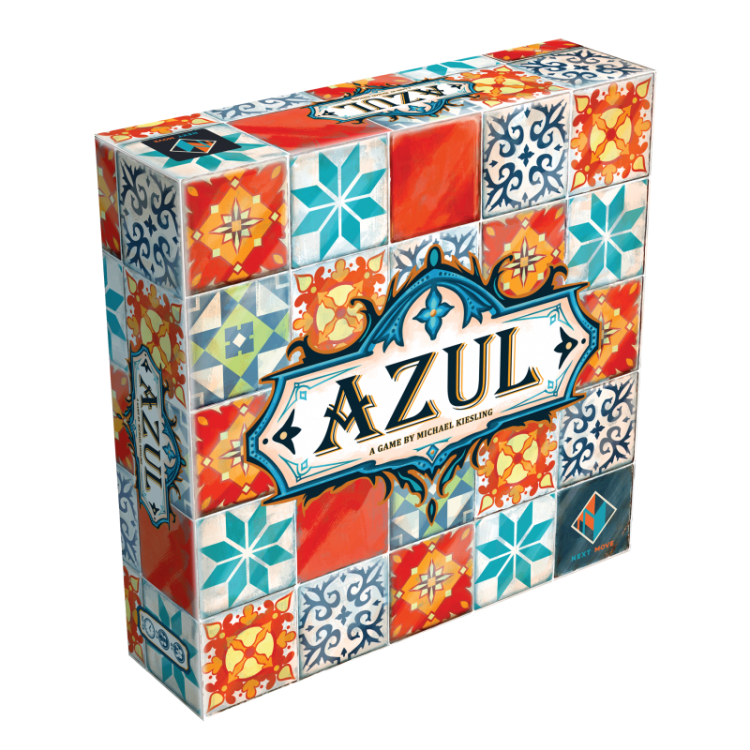 Once you’ve claimed your tiles, you have to place them onto your personal player board. Again there is a must rule: all claimed tiles must be placed into a row. You also can’t place tiles in a row if you’ve already placed a tile of that color into your mosaic. Any tiles that don’t fit in a row will spill onto the ground and cost negative points. At the end of a round, once all tiles have been claimed, you’ll place a tile from all filled roles into the mosaic and score some points. This will be a little easier to visualize with some pictures:

I choose the black tile, pushing all 3 teal tiles into the center

In this first gif, I take the single black tile from the factory and push the three teal tiles into the center. The black tile must be placed into an available row. Had I taken the teal tiles, the black would go to the center. I could use those 3 teal tiles to continue filling out the bottom row or to fill the row with 3 empty spaces. [Editor’s note: Ignore the 2 factories at the top of the image. Those tiles should be in the center. Double check your staged gifs kids.]

Completed rows place a tile in the mosaic. Incomplete rows carryover to the next round

In this 2nd image, the top two rows are full and thus are placed in the mosaic. The red tile will score bonus points for being adjacent to other tiles which is a key part of the strategy. Because the black and teal rows are incomplete, they remain partially full going into the next round. This has the potential to be very bad because I don’t have the flexibility to take a bunch of tiles; if I’m forced to grab 3 black tiles and place them in that incomplete row then two of them would drop to the bottom and score -2 points.

The way all these restrictions intersect is what earns this game a spot on my shelf. During the early rounds of a game your board will be wide open and you can take nearly anything. There’s some strategy in how quickly you push to fill the 5-square rows and what rows you leave half-filled moving into a later round, but for the most part you aren’t stressing your opponent’s actions too much. By round 3 that completely changes.

Suddenly every play matters. If you’ve already placed blue tiles in some of the larger rows than being forced to take 5 at once could be devastating. Choosing tiles becomes as much about delaying a flood or forcing your opponent to take the last handful than it does trying to finish your mosaic. You can’t ignore that of course, because you want points, but Azul quickly develops a stress belied by its Starburst tiles and simple rules. 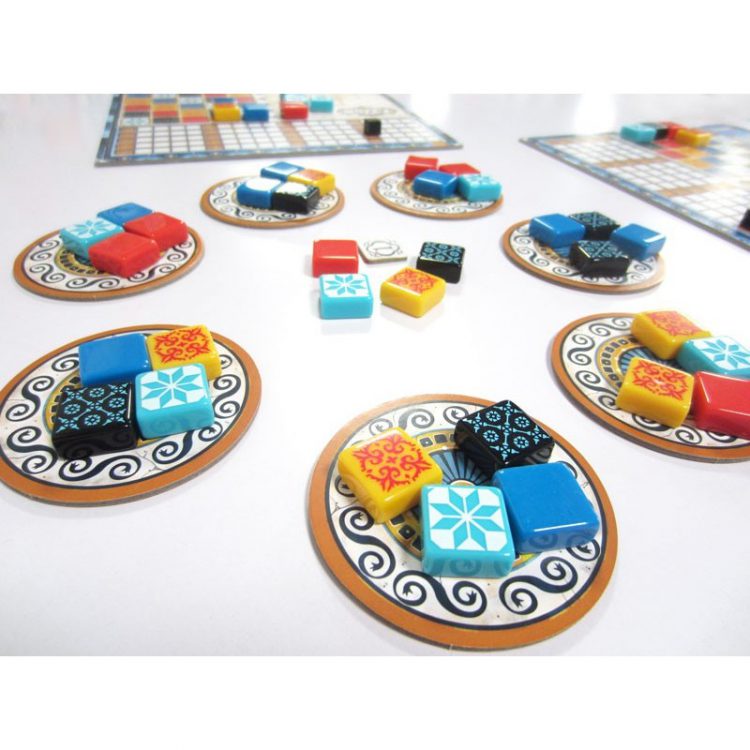 Three and four player games become an exercise in rapid crisis management as your opponent’s shatter your plans with every play. At two-players it’s nearly a battle. A quick glance at your opponent’s board reveals what they’re planning. The temptation to lightly sabotage yourself to wreck their round is strong; their ability to push you into an awful situation is equally strong. The last time I played with my wife she tripled my score thanks to her expertly tipping tiles into the center factory in a way that forced me to cut my score in half with negative points.

Despite the tension and frustration that a game of Azul can build, it remains an easy game to teach, learn, and get into. The frustration washes away after final scoring is done helped along by the lasting image of your final mosaic. Player boards include a free-form layout on the backside letting you play a game where you can attempt to develop your own design. Your turns are more flexible and the pattern more haphazard, but it provides a refreshing change. Fewer pattern restrictions tend to provide higher scores which can make things less frustrating as well.

Spiel de Jahre winners are undoubtedly good games, but they often don’t align with my tastes. They tend to be lighter, more approachable, and feature less direct conflict. I want to blow up your space ships, abduct your cultists, and slay monsters. As it turns out, I also want to laugh as I force you to drop a bunch of tiles on the floor. Azul’s gameplay is as enticing as its box art and its earned consideration as a modern classic. I expect we’ll be playing this for a while.