Book Review: Alpharius: Head of the Hydra, by Mike Brooks 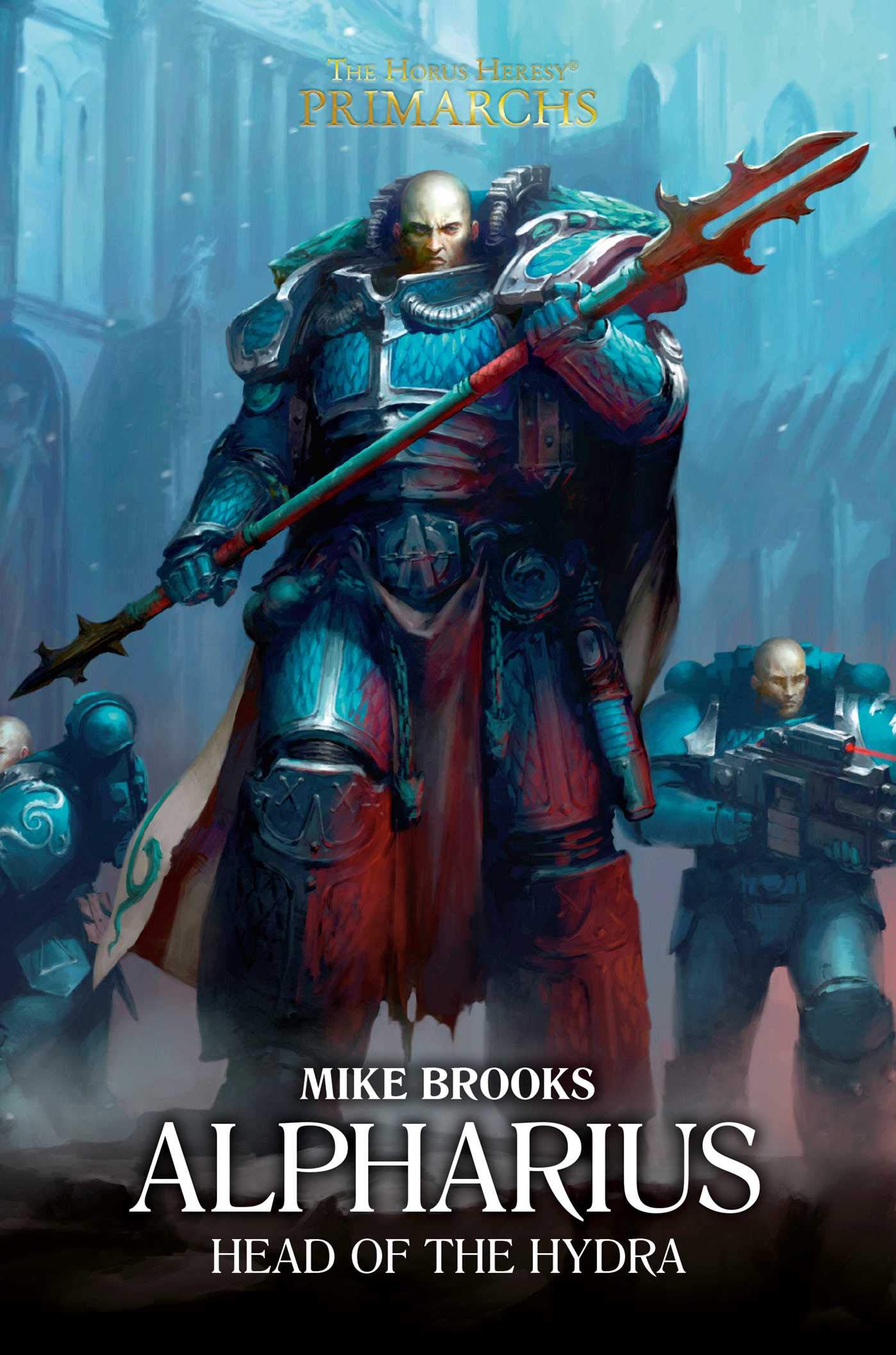 SPOILER ALERT: This review contains spoilers for Alpharius: Head of the Hydra by Mike Brooks and also Legion by Dan Abnett. So if you’re very spoiler-averse, don’t read this review. If still want to know if the book is worth reading, then the answer is yes – it’s decent. Go read it and then come back.

As the resident Goonhammer Chaos Guy, you might expect that I’d jump at the chance to read a book about Alpharius’ origins. And well, you’d be about half right. While I’m generally big on reading more about all the traitor primarchs and each of their fallen legions is one of my special, unique boys, over the last few years I’ve grown more and more fed up with the Alpha Legion’s bullshit. Over the last twenty or so years, the Alpha Legion have gone from “the one legion that specializes in guerilla warfare and subterfuge” to “the guys who were just pretending to lose this whole time and are actually behind you and also it turns out your dog was a covert operative working for them the whole time.” In the process they’ve gone from “interesting” to “tiring,” as the twists often seem to fire from out of left field and their triple- and quadruple-crosses just feel convoluted and unnecessary, while new plot revelations around the Alpha Legion tend to feel like similarly unnecessary tweaks that make them even more special and secret.

So no, I’m typically not excited to read about the Alpha Legion. I thought the Omegon reveal in Dan Abnett’s Legion – that the Alpha Legion has not one but twin primarchs who share a soul – was extremely cool, but the notion that the Alpha Legion weren’t really traitors but were kind of maybe on humanity’s side despite working with Horus was so incredibly dumb. I came into Alpharius preparing to roll my eyes a number of times. And while I did initially, at the first reveal that Alpharius was discovered before Horus and all the other primarchs, the book managed to stave off subsequent rolls. In Alpharius, Mike Brooks has crafted a solid narrative that helps understand the nature of Alpharius and his legion in a way that held my interest while never falling into the typical traps or throwing out twists for their own sake.

Much of this comes from Brooks’ decision to set the book in a first-person narration format. I’ve come to believe that one of the reasons that Alpha Legion reveals feel so tiresome is that they’re often told from the point of view of their victim, the poor, shocked fool just learning that everything he thought he knew was a lie: “No, it is I who was behind you,” chuckles the Alpha Legionnaire as he materializes behind the protagonist as every single trusted confidant simultaneously reveals themselves to be a double agent in the legion’s employ. Even when there are small hints that something isn’t right there’s little to no build to these events, and no chance to see the wheels in motion. You’re surprised when the narrator is, and so these things feel like they come out of nowhere, and as a result feel unearned unless you read the book constantly assuming that every other character is a double agent and every seeming victory is really a trap. Which, fair enough I suppose. On the other hand, by setting the story in Alpharius’ voice (more on that in a bit), Brooks gives us a chance to see the elaborate set-ups and mind games from the point of view of their executor. Brooks cannot effectively “cheat” the reveals, nor does he try to – in an early scene where Alpharius infiltrates the Imperial Palace to demonstrate a hole in its defenses, we are walked through every step of the primarch’s plans, shown the measures taken, and given the reason for being cautious. For once, we get to be in on the fun, and not just watching other characters have it.

The result is pretty great – a book that gives you the important details of Alpharius’ life and why his discovery was kept secret until 19 other primarchs had been discovered while also giving you a good idea of who the legion are and how they operate, but never feeling like it’s trying to be too clever for its own good, and never presenting the Alpha Legion and its primarch as the Imperium’s unstoppable cleverest boys. Though it’s to the book’s credit that Brooks is sensible enough to acknowledge some of this absurdity – on one occasion a mechanicum tech-priest questions Alpharius about his plans, wondering aloud how exactly a secret mission can act as “a cover” for another, even more secret mission. There’s a reasonable explanation for it in the book’s context, but it’s at least a welcome acknowledgement that the Alpha Legion is sometimes too on their bullshit.

The big twist of the book is that Alpharius was not the last primarch discovered by Horus, but rather the first primarch discovered by the Emperor, having landed only a short distance away on Terra. Fearing that he might never discover the other primarchs, the Emperor chose to keep Alpharius secret, telling him that he’d be his “hidden sword,” or the leader of covert operations, and he was to keep his identity a secret from as many people as possible for as long as possible, save for Malcador, naturally. Alpharius learns not from the Emperor in his early days but the Sigillite, learning how to hide his thoughts from psykers, and eventually reveals himself to Constantin Valdor during a daring infiltration of the Imperial Palace designed to showcase security flaws. The result of this infiltration ultimately leads to the creation of the Blood Games, which is a cool touch.

The main thrust of the book however is the discussion of the other half of the XXth legion’s primarch, Omegon. Alpharius can sense from a young age that something about him is missing and as other primarchs are found he begins to conduct his own search, before finally picking up the scent. He follows a trail of clues that lead him to the northern front of the Great Crusade where the Dark Angels are embroiled in a series of conflicts known as the Rangdan Xenocides.

It’s in these final chapters where the book really shines. While the history of the Alpha Legion up to the discovery of its other primarch is relatively straightforward (though one advantage of the Alpha Legion’s stealth focus is that you get to spend less time glossing over boring depictions of battle), the final chapters see Alpharius traveling to the northern galactic front, ostensibly under the guise of helping the Dark Angels in the Rangdan Xenocides but really as a cover for a secret mission to discover Omegon. As the legion travels deep into the war zone their discovery mission turns into a rescue mission and then a desperate play for survival as we’re given a proper introduction to the Slaugth, the race of “maggot men” behind the Rangdan. There’s a certain value to presenting the Horus Heresy as a mostly unexplored mythology. Keeping the past mysterious makes room for readers fill in their own gaps, and creates a compelling desire to know more that tickles the parts of our brains that hate knowledge gaps. Opposing that, there’s a desire among another set of readers to see every detail of the primarchs explained and every battle tallied; the result is a tension on the writers’ part between revealing things for the fact-collectors while withholding other information or utilising an unreliable narrator format to preserve some of the mystery (though with 50+ books in the series and its offshoots, the ship has in large part sailed). One area where it feels like writers have a relatively free hand is when it comes to giving us details on the myriad xenos races that plagued the Imperium in the early days, exploring minor alien species who don’t necessarily need to conform to the requirements of the actual game and the “modern” 40k setting. Brooks takes advantage of this with the Slaugth, and gets to present us with a uniquely terrifying threat that make for a great foil to the primarch and his twin.

Alpharius and Omegon eventually do make it back to their legion – obviously – and the book ends the same way it begins; with Omegon making his way onto Horus’ battle barge to introduce himself as “Alpharius” to make public the discovery of the XX Legion primarch. There’s a bit of misdirection here in the book as to who the narrator is but ultimately it’s not framed as something important to the story – there are neither enough crazy revelations nor enough dramatic weight for it to matter if the narrator is reliable anyways. Yes, sure, this may be another lie and the real Alpharius origin is different, but I’ve always found that particular line of thought boring – who cares what the “real” origin of a fictional character is? And likewise, it has never mattered when or how Alpharius was discovered, only what he chose to do after said discovery. And what he does here is pretty cool and sheds some new light on an interesting xenos race we haven’t seen in the 41st millennium, while reframing the lore of the XXth in a way which is a lot more engaging for the reader than the typical “just as planned!” convolutions.

Alpharius isn’t particularly long, but even discounting that it flies by; it has both solid writing and enough interesting new stuff to make it worth reading even if the Alpha Legion aren’t your jam. I didn’t expect to like this book – especially after the initial reveal – but it grew on me as I read it and I really enjoyed the final third. It’s one of the better primarch novels I’ve read, and if you’re at all interested in its subject matter it’s very much worth your time.