Competitive Innovations in Kill Team: May 2022

It’s been a tumultuous few weeks for Kill Team, and a busy time since our last Meta Analysis. We’ve seen the release of a balance dataslate in March, a series of big FAQ updates in April, and the release of a new Kill Team with the Void Dancer Troupe. This past weekend marks the first to incorporate results from the new FAQ, and so now felt like a good time to revisit the Kill Team meta and talk about what’s working and how things have changed.

Generally speaking, Novitate teams are on fire right now. Novitates won both of the events we tracked last weekend – Major Madrid II and the Seattle Open – and also won gold at the LTScum Gran Torneo two weeks ago. They seem relatively well poised to take the Kill Team crown, though it’s currently a tough competition with Harlequin Void-Dancer teams, who won several events the weekend of April 23rd and continue to put up interesting results.

That said, neither team feels completely oppressive right now – a trio of results in relatively small fields does not a bogeyman make, and until we see more to suggest that Novitates are an issue, the Kill Team meta feels fairly healthy right now – though the caveat here is that they’re currently holding a 67% win percentage for April – more on that below. Specifically, Novitates, Void-Dancers, Voidscarred, Wrymblade, Warpcoven, Legionary, Pathfinder, and Veteran Guardsmen teams all seem pretty competitive, while Grey Knights and Talons of the Emperor teams seem to have some outside play. That’s a solid list, though Warpcoven have fallen pretty far from the spots they occupied at the start of the year.

Looking at events with 4+ rounds and 16+ players, we can get a decent idea of how most of these factions shake out: 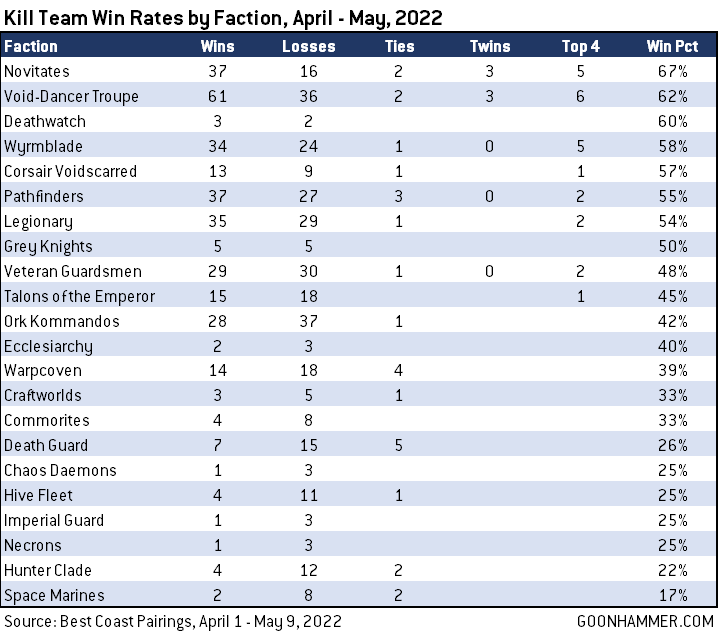 Again, these are not huge numbers, but they do give us some directional suggestions based on the six events we looked at. It is a bit concerning that Harlequins and Novitates won every non-league event in our sample, so it’s worth keeping an eye on those as we move forward. But again, this is not a huge sample of games – it’s going to tell us more about the relative value of some teams rather than giving us strict info on which teams are dominating.

Spain continues to be the beating heart of competitive Kill Team, running a 5-round, 50-player event this past weekend. This event saw Novitates winning, though with healthy representation from Corsair Voidscarred, Pathfinders, Wyrmblades, Void-Dancers, Legionnaires, and Veteran Guardsmen teams. Lists for this event can be found in Best Coast Pairings.

While the changes to Novitate Kill Teams moving inferno effects from a special rule to a critical hit rule were a nerf, the Spanish community had been playing them as a Critical hit rule for some time. Even in this state, Novitate teams are strong on the tabletop, though in interesting ways – the Purgatus flamers and Condemnor do most of the ranged work while the Sister Superior can act as a melee threat and the rest of the team needs to stay in Conceal as long as possible to make up for a general lack of durability.

For some extra color, we asked Fernando about taking Novitates and how he played them:

“I choose Novitiates because I fancy to – they are quite competitive at this moment but they are not the highest tier. Also I had lost my last tournament with them and I had the feeling that I could take them to the next level, so I put in some more prep games and well in the end it all come together. I had my worst nightmare in rounds 1-3 against a full engage pathfinder team; this kind of matchup is all about holding your ground on T1-2, using your medic and making circle charges on T2 and 3 – charging a guy who has already activated and letting him live with 1 Wound or so makes the pathfinder so much vulnerable to the next turn (where I can strike and charge again). Against Wyrmblade I got lucky: On T1 I could connect a charge with my Repentia to the locus and kill him – after that the wyrmblade start falling apart. On T2 I get lucky and took the initiative and took advantage of the superior + flamer combo on the 1st activation and that was game right there.

I do think Void Dancers would have been a threat for the novis (Robnote: Fernando did not face them during the event) but I do have a special roster waiting for them – putting in the duelist and taking the Repentia away and swapping the lash girl with the comm. The strategy would have been to have 2 flamers and the leader with 9 inch movement + shoot so I can take the ‘quins away from my side of the map. Oh well, maybe next time! It was an awesome tournament and I can only hope for more big events like this in the near future.”

Coming in second is Lazarast’s list, which sports the recently arrived Corsair Voidscarred – note that in BCP these are all listed as Craftworlds. Lazarast’s list gives two leader options, where the neuro disruptor can be swapped out for a shuriken rifle and pistol for when you expect they’ll be locked in combat more. After that the list will lean on a Fate Dealer and Blaster Gunner for ranged support and the Duellist/Shad Runner for melee support, giving it a fairly balanced attack while the Way Seeker can dish out damage or support an ally with a 3+ invulnerable save.

Despite being one of the oldest teams in Kill Team, Veteran Guardsmen still have what it takes to put up results.

Even with the nerfs to activations and drones, Pathfinders are still a force to be reckoned with, able to dish out real damage at range and boost each others’ efficiency.

Games Workshop added Kill Team events to its Open events this year, kicking off its Seattle Open with a 5-round, 19-player event in Tacoma. That’s normally below our threshold for events, but it’s worth keeping tabs on it as the other recorded event the week after the FAQs. Novitates won this one as well, with Chris Bacchi taking home the trophy for a 5-0 finish. Though it’s worth noting that Novitates also placed second at 4-1 after Tyler Johnson lost to Chris in round 2.

Lists for this event can be found in Best Coast Pairings.

That wraps up our look at the meta in May but check back next month when we tackle the way things have progressed. In the meantime, if you have any questions or feedback, drop us a note in the comments below or email us at contact@goonhammer.com.