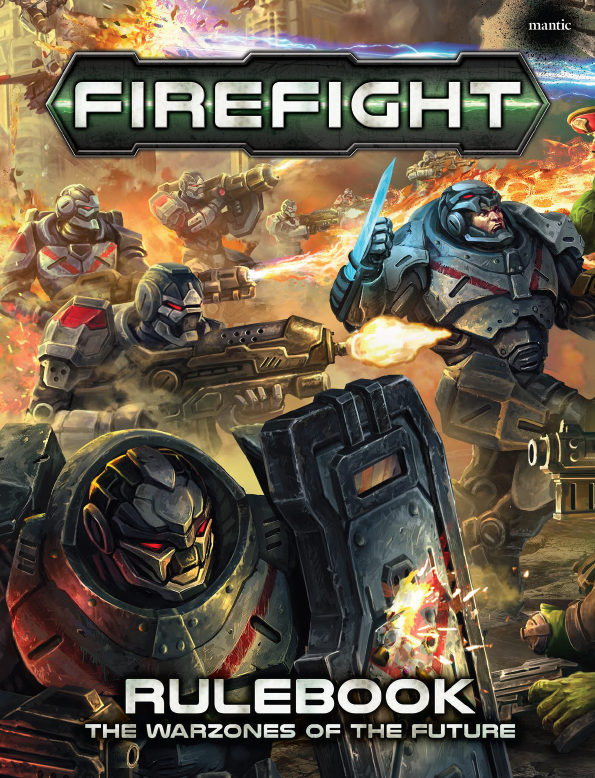 Last week we took a look at the brand new box set for Firefight, Mantic’s platoon-level science fiction tabletop wargame. We did a high-level overview of the box set and everything included. This week we’re going to dive into the rulebooks specifically and talk about them.

There are two rulebooks included – the main book called Rulebook and the Force Lists book that helps you figure out how to put together an army. The Rulebook is about 100 pages and the Forces book is about 130 pages – they’re pretty standard sizes for the softcover books that we all buy and use in our different wargames. 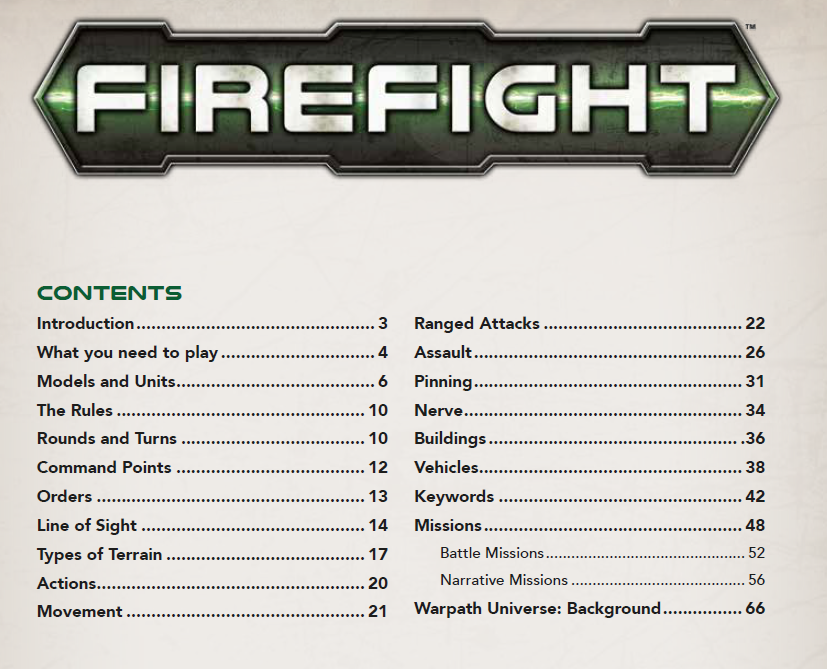 The rules themselves are 38 pages long with the missions following for almost 20 pages. I appreciate the easy to read contents here. One of the first things I looked for was an Index, and there isn’t one included here – but the rules are relatively concise and well titled on the Contents page.

The book starts with a one-pager description of the universe, giving you a great idea of why people are fighting and who they are. I’ll be covering the story and forces in another article, but it’s a good read. There are four pages of introduction including some of the base tenets of the game – what command dice are, how D8 rolls work, how modifiers stack up, and how you use re-rolls. These are all common things in a modern wargame and it’s good to get them out of the way.

The unit profile template is then shown with labels. These templates are very recognizable and make a lot of sense to most experienced gamers. I like how they include the base size in the unit profile along with points cost.

Almost every unit in the Forces book uses only Keywords to define their rules – this makes things fast and easy. Your Headstrong is the same as my Headstrong, and we both know what it does. Some commanders have a special command rule but other than that most units are concise like the above profile. 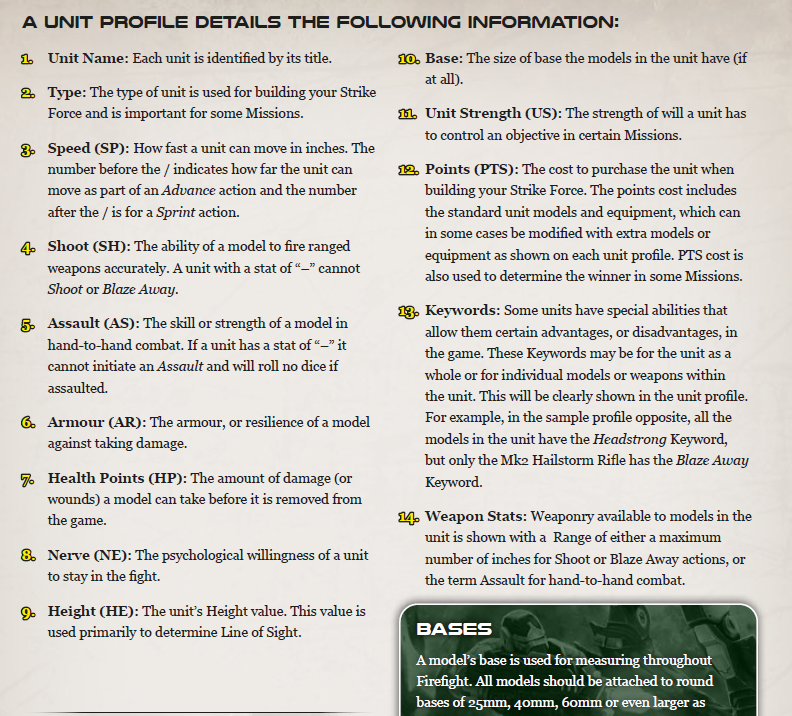 There’s a really good breakdown of the profile here showing each stat and what it means. These are really useful for those of us who play many games or people who are just starting in wargaming. As we’ll find out later the Height of a unit is included for a little bit of abstracting when Shooting, which I am a fan of generally – true line of sight can sometimes lead to some bad feels when you lose a whole unit due to shooting through a keyhole. 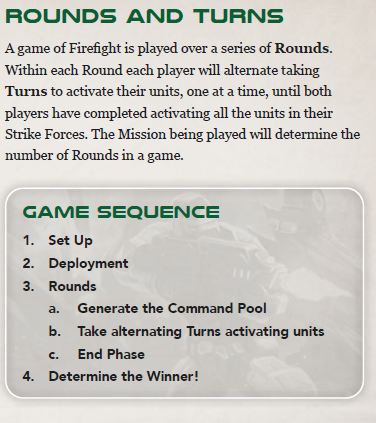 A game of Firefight is played in Rounds, with each player taking a Turn to activate a unit. I love alternating activation games and I’m so happy to see Mantic embrace it in Firefight. Whoever finishes activating their units first will go first in the next Round. There is also an endgame cleanup phase where you remove pins if possible, check nerve, score, etc. To give you an idea of the number of activations you might have in a game, the base box comes with ~775 points of models (a normal game is considered to be 1,000 points) and there are seven activations for each side. 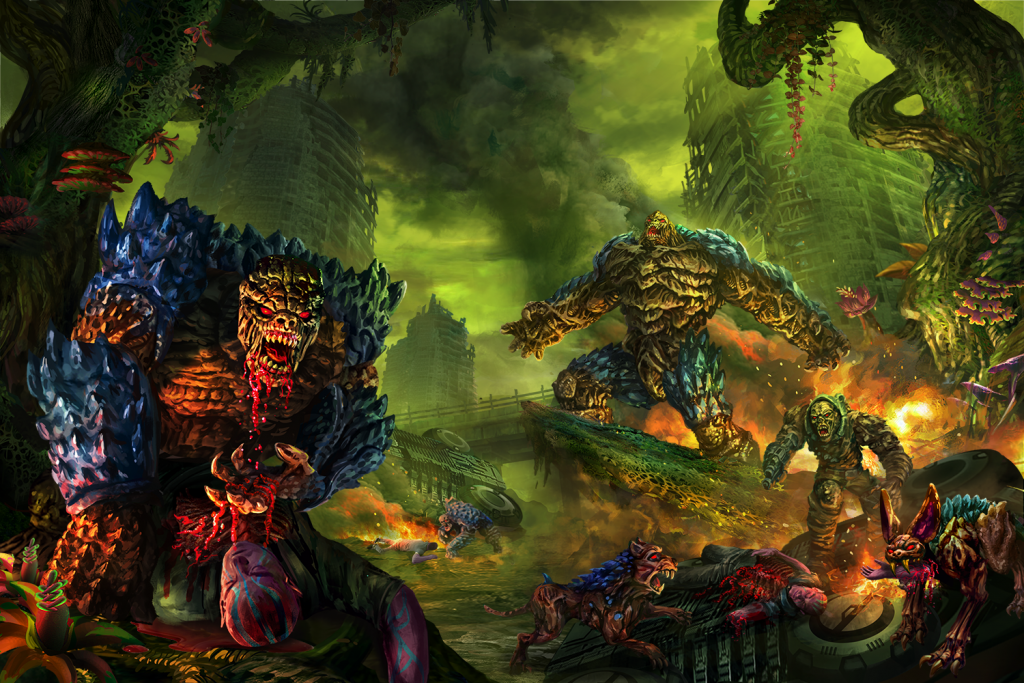 It seems like most games coming out these days have a resource mechanic and Firefight is right there. To be fair to Mantic, this command dice mechanic is similar to what we’ve seen in The Walking Dead: Call To Arms, Kings of War Vanguard, and of course the warband game set in the Warpath universe, Deadzone.

Each turn you roll three Black Command Dice, then add any command dice from units. In the core set we have the Peacekeeper Captain adding a Green command dice, the Commando Captain adding an Orange, and the Ripper Mauler unit adding one Black. Green is the best die, orange is good, and black is the least useful in terms of die facings.

Command points cannot be saved turn over turn so it is smart to use all of them. I’m not an expert in Dice Math™ but it seems like each force in the Core box is going to average 4-5 command points a turn. It may seem unfair that you might roll low on your Command dice – but this really does add a layer of Fog of War or Friction to the game that I really enjoy. Not every force is always going to be able to do the same thing all the time.

I love that there are standard Command Point uses here just like in Vanguard. Paying one Command Point to activate another unit and attempt to do your mini-alpha strike is a cool mechanic that breaks up the alternating activation akin to the Snap To order in Bolt Action. 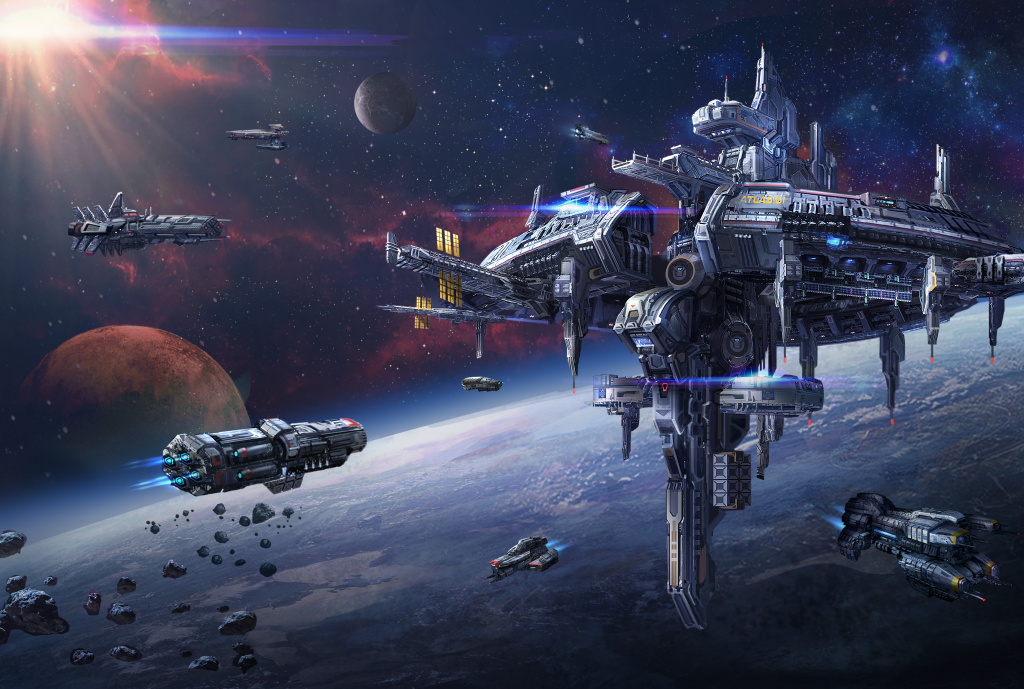 Each faction in the Core box has three specific Faction Orders and one model with a Command Order. These Faction Orders are where you’re going to see how the factions differentiate from each other and create a play style. In our Core box each faction has three different orders. Faction orders can be given to units within 12″ of a Command model and the unit cannot be Pinned.

Here’s a sample of one Faction order and Command order for each faction:

Enforcer Faction- Go, Go, Go (2): Use as a Long action to allow the unit to perform an Advance, Shoot, and second Advance in that order.

So for two command points you have one unit doing an extra action in their turn – normally you’d only be allowed to move and shoot. This is a big bonus to one unit and could really allow you to move up the board and still fight. 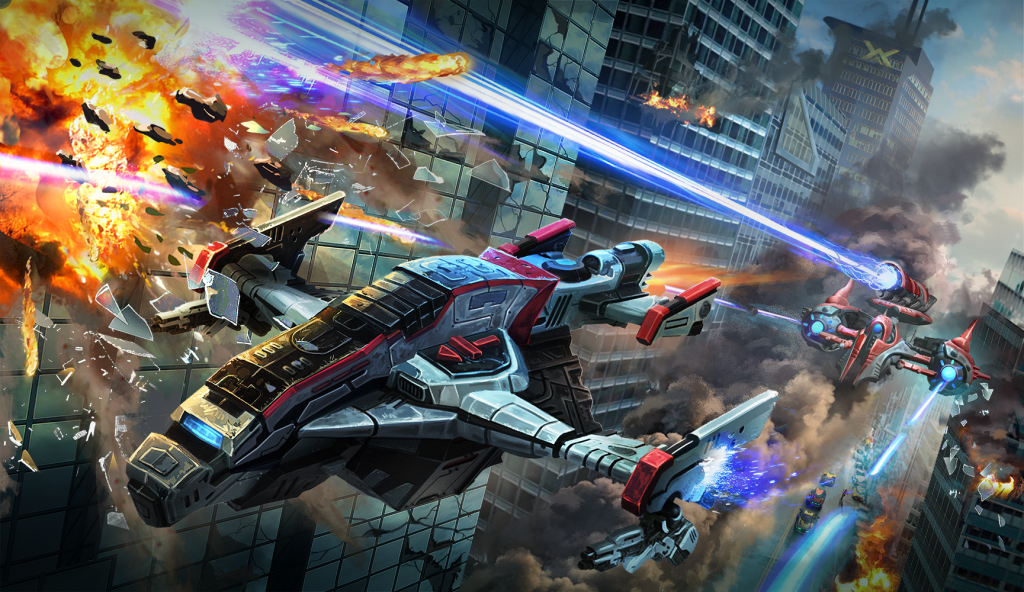 This is huge! Resilient (x) allows us to force one successful damage die re-roll, so each unit within 12″ can do it twice. Since it is an Aura it lasts until the end of the round – so you’ll want to activate the Peacekeeper Cap early in the round, fire off his command ability, and watch it work through the rest of the round. You’ll just want to be careful to keep the units within 12″ of the Captain.

Marauders Faction – Every Penny Counts (1): When the unit performs a Blaze Away action it may immediately perform another Blaze Away action against the same target or another unit within range and LoS, and within 9″ of the first target unit.

We haven’t covered Blaze Away yet, but suffice to say it’s a less accurate attack that also will cause pinning if one hit is scored. This allows you to potentially Pin two units, causing the enemy to have to save Command Points to the end of the turn to unpin them. You’ll also make it so that the enemy units can’t be given a Faction order since they are pinned. Using this earlier in a turn before the enemy units have activated could be huge! 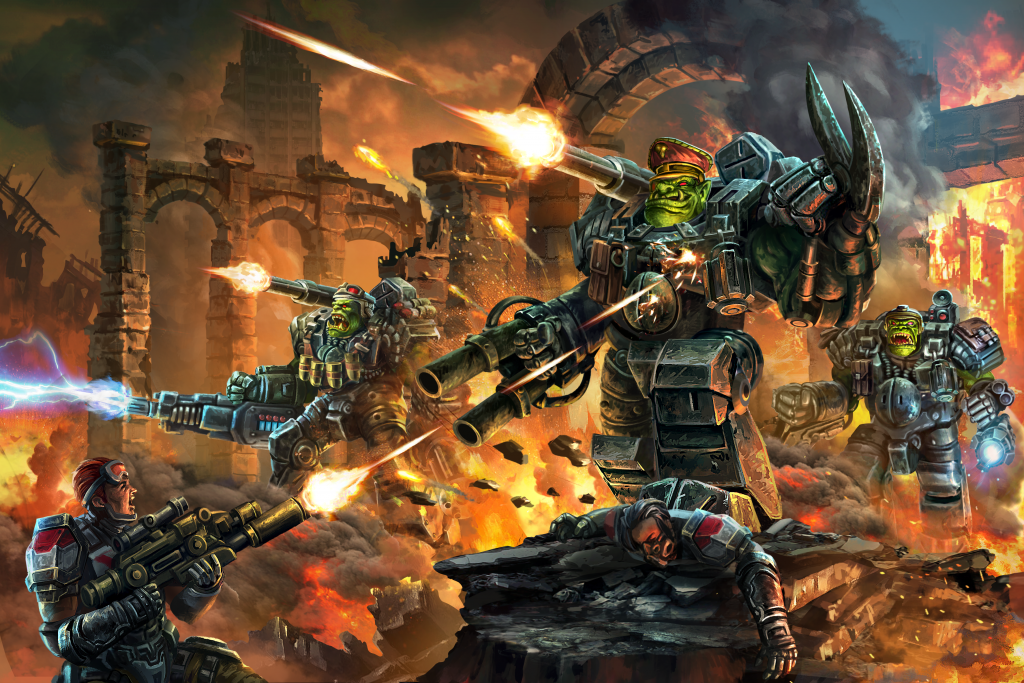 Commando Captain Command Order – For The Money [Aura] (1): Friendly units within 18″ do not receive a Pin marker if hit by Pinning weapons.

Another command ability that seems like you’d want it used early on in a turn, in this case to protect your dudes from being Pinned. For one Command Point you save potential points from being used at the end of the turn and make sure your units can use Faction orders later in the turn.

Each Faction order usually only lasts for an activation – so you really don’t need a ton of bookkeeping on the board to remember stuff, which I like. Some can even be boosted, where you’re spending extra Command Points to make the Order stronger.

Each unit in your force will activate once per Round, even those in transports or off the table (similar to Bolt Action in that respect). When a unit activates, it can do two Short Actions or one Long Action. It can only do each type of action once – you cannot Shoot twice, Advance twice, etc. unless you have an order or keyword that allows you to do so.

Shoot / Blaze Away is pretty simple – it allows a unit to Shoot. I’ll detail that more in the next article.

Advance makes a unit move up to their Speed stat. Units will have a Speed stat with a slash in it – like 6/12 – that means they can move 6 when they advance. If a unit moves within 1″ of an enemy it will initiate an Assault. Otherwise units must stay outside of 1″ of enemy units. We’ll cover Movement more in a separate article.

Hit The Dirt makes a unit count In Cover even if they’re not in it. You get no benefit from actually being In Cover when you’re in it, so don’t think you can double up. You can actually do this action out-of-turn if you get pinned, and certain units can’t do it – big units, walkers, vehicles, etc.

Sprint is a Long action, so it takes up an entire activation, and means you move the second number in your speed (so a 6/12 would move 12 inches). If you sprint within 1″ of an enemy unit you are considered to have Charged, which may give you a bonus later when you Assault.

I really like this method of structuring activations – it’s used in The Walking Dead, Vanguard, and Deadzone. It gives the player choices but you can’t always do everything you want. It also raises the value of Orders as those will allow you to break the structure and do special moves, so to speak.

Thanks for reading and check back next week for more on Mantic’s new Firefight 2nd Edition!