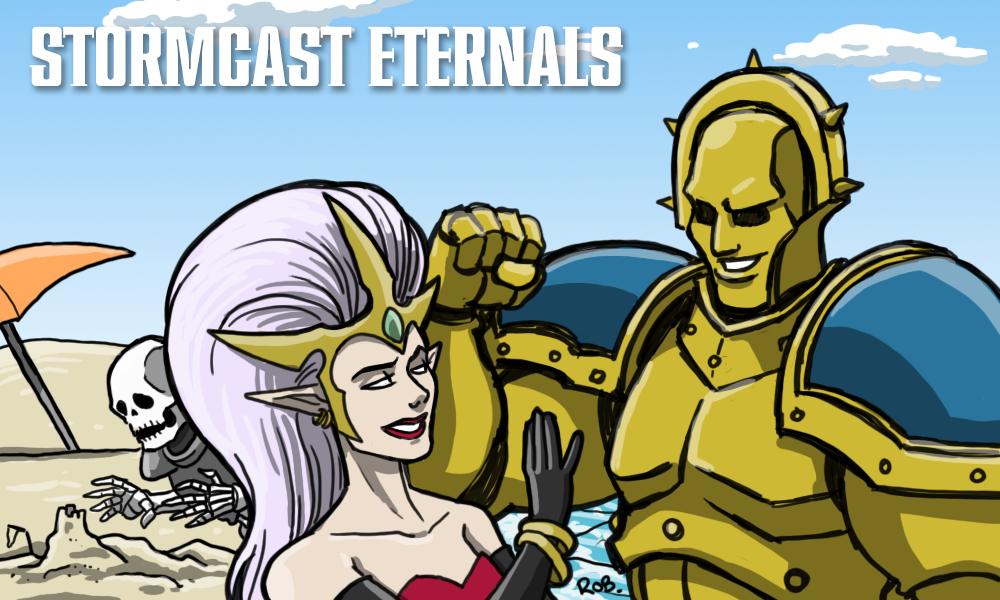 HAIL! Son and/or daughter of Sigmar! So you have seen the light and have been reforged in Sigmars glorious light have you?! Thinking of amassing a mighty storm host in the name of the god king of all that is order?! Perhaps you played space marines in 40k and like those, but you wished they had more diversity. Or do you simply want the easiest faction to get into, a balanced force that can stand up to any foe. In any case sit down, grab some snacks, and have yourself a read of this most humble article as it will help you down this road to the glorious Stormhosts of Sigmar! 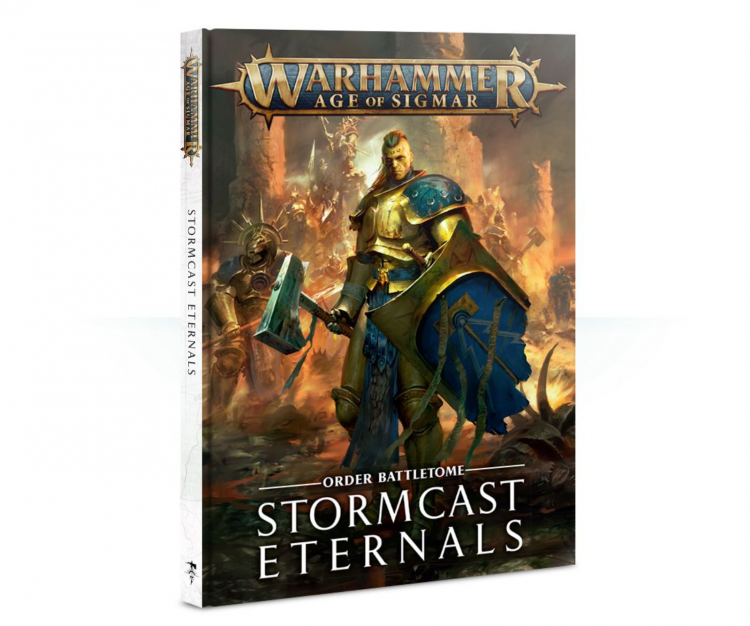 Let’s start by getting the boring part out of the way. When it comes to books all you need is main Stormcast Eternals Battletome. Just be sure to pick up the most recent version. The book is jam-packed with every single unit available to the Stormcasts’ mighty hosts – No supplements here, no sir!

In addition to the battletome, I’d also recommend that you pick up the Games Workshop Azyr app. This army-builder app carries a monthly subscription cost ($1) but it gives you a very user-friendly Age of Sigmar roster builder that’s kept constantly updated and gives you access to digital copies of books at half-cost, plus the ability to look up warscrolls form any faction on-demand. The reason I recommend this for the Stormcasts in particular is because they have a lot of units. This can make them difficult to track sometimes and the app can really simplify the process and help you avoid looking for secondhand warscroll cards if you want physical copies.

Before you start collecting Stormcast Eternals, you should familiarize yourself with the Chambers of the mighty Stormhosts. The Stormcast Eternals have three major groups, or Chambers, each with its own specialties and units to work with. These will influence how you build your army and what you should collect first. The Chambers aren’t a strict rule for army makeup; you’re allowed to mix and match them as you please. They represent the waves of Stormcast that Sigmar created, and so each one tends to have abilities that allow them to synergize well with each other. The starter boxes are all based around Stormcast chambers so your collection will often begin with a focus on certain chamber but you have a lot of options to expand from there.

Strike Chamber – These guys are the first of Sigmar’s legion and as a result are the most flexible of the bunch. Their most common troops are known as the Liberators which are the cheapest troop choice the Stormcasts have. And if you look at almost every single ad GW put out about Age of Sigmar, you would see these are the poster boys. Effective, simple, straightforward, but no real major specialization. If you want to go this route I highly recommend the start collecting box called “The Thunderstrike Brotherhood” because it comes with everything you need for a great start! 10 liberators, 3 prosecutors which are liberators with wings, a Lord relictor which I will get into later, and then Vandus Hammerhand himself. Vandus is the big grand daddy of the Hammers of Sigmar Stormhost with his awesome mount, abilities, and the biggest freakin’ hammer in the mortal realms. His kit can also be built as a normal lord on the same mount as well.

The Vanguard Chamber – The Vanguard chamber live up to their name. They really love scout deploying and moving around real fast despite being in full plate mail. They also really love shooting, for they have two of the best long-range infantry in the Stormcast roster, being the Raptors. One with a machine gun crossbow to go full rambo and the other with a massive sniper crossbow so you can that’s super accurate and does great damage. Outside of that almost every single unit they have has a ranged weapon instead of shields. Don’t expect to run long ranged gunlines, though – your common foot troops, Vanguard Hunters, only have hand crossbows, so the majority of your force will be short-ranged. If this is the way you want to go I recommend getting the Start Collecting: Stormcast Vanguard box. It comes with 5 hunters, 3 Palladors which are their hit-and-run cavalry, 3 bird puppies, and then their lord character. The only thing I would add to that as a start is one more box of 10-man Vanguard hunters as you’re going to need some more troops. If you can find the “Blight War” two-player box that’s also a very good deal, especially if you can find a friend who wants the Nurgle half. It’s the same as the Start Collecting but it comes with a lot more dudes. It even comes with one of the most badass women in the mortal realms – the dual handaxe-wielding Neave Blacktalon.

The Holy Sacrosanct Chamber – This is a chamber of holy crusader warriors dedicated to killing anything that’s chaos or giving Nagash’s ghostly boys their daily wedgies. They are also the most elite and most magic-heavy of the Stormcasts. They have better overall stats and utility in exchange for costing a lot more in points. If you want some really awesome front line troops that will hold the line till the end of days, the Sacrosanct Sequitors are the unit for you. If you want to start your collection with these, we recommend starting with the Soul Wars two-player boxed set, and splitting it with a friend who can take the Nighthaunts. It’s more expensive than a standard Start Collecting but well worth it since the box gets a Lord on a big bird mount, 10 Sequitors, a Ballista crew, a Knight Incantor, 5 Castigators (their ranged foot unit), and 3 Evocators (these are very strong but since they come in minimum units of 5 models, this box leaves you needing to find two more). There’s also a smaller version of this box called Tempest of Souls which is the same as soul wars but cheaper and with fewer models (still a two-player box, though), and isn’t a particularly good box for starting a Stormcast Eternal army.

If you can find it, the army box released last Christmas, called Exorcism Soulstrike, is a fantastic deal with a lot of great units and worth picking up if you can get it for MSRP. They tend to re-release these boxes every holiday, so keep an eye out if you can live with waiting to start your army. 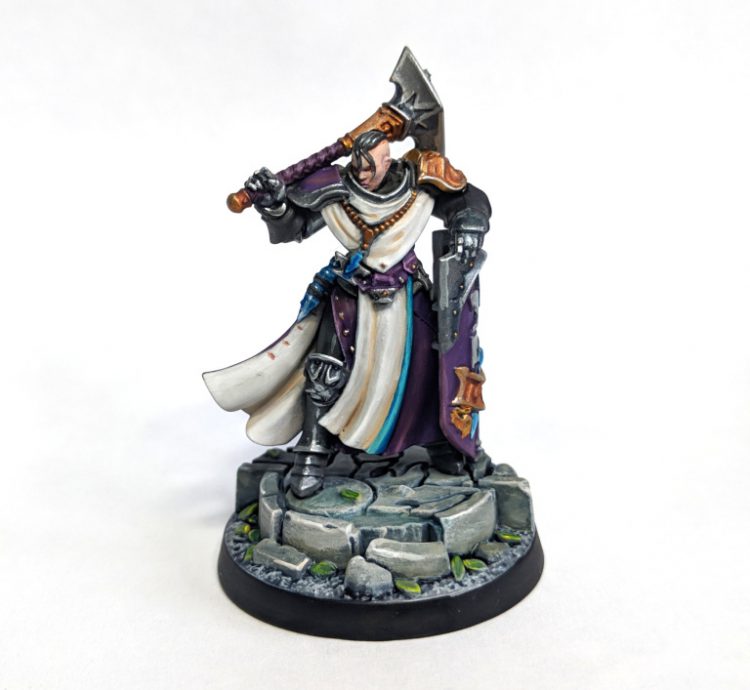 Before we expand your army, let’s talk about what your goals are. Do you…

Well, competitive armies come and go as units become better and worse due to new General’s Handbooks and the release of new armies and rules. You’re likely have a long, likely expensive road ahead of you that will require changing your army many times. We recommend checking out Start Competing: Stormcast Eternals (BEING PUBLISHED THIS FRIDAY!) and building toward one of the armies shown there.

…Just want to have some fun and maybe win some games?

Praise Sigmar! If you find that you are enjoying the Stormcast Eternals and want to expand on your glorious Holy Crusade in a more casual sense then here are some noteworthy units and characters I can recommend for you as you think about where to go next:

Here we’ll talk about some sample lists you can make that focus on each of the chambers I mentioned as a way to build from a particular boxed set starting point. These are based on an average 2,000-point game.

This list gives you some real staying power, making so your archers (the Judicators) can gain the ability to re-roll 1s on their saves against ranged attacks if they stay within 3″ of the Liberators. This uses two 10-model squads of Liberators to act as tough front-line infantry that can tie your opponent up for some time while the lord Castellant buffs the Retributors and the Lord Arcanum slings some spells. Vandus Hammerhand acts a combat monster here and acts as an upgrade over a Lord Celestant if you’re playing Hammers of Sigmar.

With this list you’re going to take advantage of the Stormcast mounts’ ability, Ride the Winds Aetheric, which lets them pick a direction and charge forward 6D6″, ignoring intervening terrain, improving it to 9D6″ and making it easy to close the gap with your opponent’s army early immediately. The Lord Aquilor allows you to improve on this mobility by repositioning your units, and you’ll be using Vanguard Raptors to support your cavalry.

With this list we’re focusing on Sequitors and Evocators for an elite force that can buff its units, letting them re-roll failed hit and wound rolls with the Empower spell and the Cleansing Phalanx battalion. The Knight Incantor uses the Dais Arcanum to improve his armor save, fly around the battlefield, and unbind enemy spells, making them an incredible nuisance for your opponent.

Anyway that’s all there really is too it! So grab some big golden boys and girls and go on a storm host crusade! And just remember, Sigmar’s awesome, gold is the best color, Chaos can suck it, and Nagash is a giant prick. Till next time, and if you have any questions or feedback, drop a note in the comments below or email us at contact@goonhammer.com.