A long, long time ago in a galaxy far, far away…

Hello there! I’m Lunar Night, and I’ve been playing Star Wars Legion for quite some time now and wanted to write about it. While my good friend Ragnarok Angel gave a great summary of the game back in early 2020, a lot has changed since then. You can look at this little series as The Empire Strikes Back to that original article’s A New Hope.

What is Star Wars Legion?

Star Wars Legion, or Legion for short, is a skirmish war game originally produced by Fantasy Flight games. As of 2021 production has moved to Atomic Mass Games who produces that other miniatures game owned by Disney. Like Crisis Protocol, the main draw to Legion is that the iconic characters you see in the movies are a powerful presence on the battlefield and all have very unique toolkits. Which heroes your bring can drastically change your list’s synergy and what units gel best with it. Luke Skywalker is very much a unit that wants to go in swinging into the opponent’s lines, while someone like Count Dooku wants his opponents to come to him and out duel them.

In Legion you create an army based on one of the four factions we see in the movies: The Rebel Alliance, The Galactic Empire, The Galactic Republic, and the Confederacy of Independent Systems. Then build a list of units consisting of characters, soldiers and vehicles from the Star Wars films and Expanded Universe. Finally, you must build a deck of 6 “Command Cards” that offer powerful once per turn abilities. These can range from generic cards anyone can use to signature abilities unique to each commander.

The final step of the list building phase allows you to select which mission, deployment and battlefield condition cards you’d prefer. You pick 4 of each of these, and 3 will be chosen at random for you to pick from. So while there is a degree of randomness there is strategic choice in being able to select a mission your army is best at.

The game uses a 3’x6′ battlefield (or 3×3 for smaller skirmish games). From there you and your opponent compare the point total of your lists, the player with the fewest points gets a strong advantage, as their deck will be used in deciding which mission and deployment the game will use and can choose to go first or second. Once everything has been determined you set up the map, and then your army.

From there each turn consists of both players playing their command cards, issuing orders based on what their command card states. This is where the game’s “Fog of War” mechanic starts to come into play. To represent the general chaos of the battlefield, certain units near the commander are issued orders, and a token is placed next to them. The rest of the tokens representing your army are placed face down in a stack at random or shuffled in a bag called the “Order Pool”. Players then alternate turns, with the player who played the lowest “pip” card first. On a player’s turn they may select a unit with an order issued to it or draw one randomly from their order pool for the round until six rounds have been played. Once turn six has ended the winner is chosen from whoever has the most victory points based on the objectives, with a tie breaker on who destroyed the most of their opponent’s forces.

Why should I even play this?

To keep it simple: It’s Star Wars. It’s in the title of the game and it oozes everywhere in the feeling of play. If you were to take a cursory glance at the game you can tell that the people behind this game have a strong passion for the series. You see a model like Obi-Wan in his signature Soresu pose while in the same outfit from the Clone Wars. If you know what those words mean you will identify with its flavor. Many of the franchises’ most quotable lines make it into the game as abilities you can use.

Those that aren’t Star Wars nerds will discover deep and thoughtful game with loads of strategy. Something as simple as how many points you build your list with can dictate the flow of the game. Do you kit out your units with upgrades to max out their potential? Do you just build conservatively around two key units and have a larger bid to be the Blue player? Maybe you just spam the board with loads of cheap units and out activate your opponent to get cheap shots in. The strategy is yours to come up with.

Is it Possible to Learn this Game?

Indeed, and you don’t have to go to any opera houses with shady Chancellors to do so. All the rules can be found for free on the official Legion website.

So back to those four factions: we have the Rebels, Empire, Republic and CIS, and since that initial article by RagnarokAngel the four factions have really cemented their own identity at this point. While there is some degree of flexibility there are certain strengths to each force. Additionally, the balance is pretty solid right now and any faction can win against any other. You will rarely have to worry about coming into a game you absolutely cannot win, even if it might be a bit of an uphill battle.

With troops clad in armor and having a wide variety of long range weapons, Empire is very easy to play gunline faction. Most imperial have access to weapons that allow them to attack their opponents at range for or have the “Suppressive” keyword which allows you to potentially reduce the number of actions a unit can take. With these abilities Empire troops have ways to limit their opponent’s actions or cause them to panic off the board. You can then combine those troop commanders can give out Aim tokens or an extra actions (For a cost) you have a faction that wants to position itself to maximize their offensive potential even if they’re typically using the worst dice for their attacks. To paraphrase a certain famous Grand Moff “Fear will keep the local systems in line.”

While Empire shoots like Stormtroopers but have strong armor. Rebels are the opposite where their offense is fairly good in exchange for having bad defense. Though to balance out that poor defense many Rebel troops have access to gain or refresh Dodge tokens which can negate hits, or abilities that allow them to reroll or gain more dice defense dice to help block hit. This means they can’t take a blaster to the face like Empire or Republic but they have sneaky ways to get around it. Though the real strength in the Rebel faction is their characters and special units. Their characters are incredibly impactful to the game with powerful threats like Luke Skywalker, Cassian Andor and Sabine Wren while having support characters like Leia Organa or Chewbacca to back them up. You can also combine fast units like Tauntauns, or Snowspeeders to get  up the board fast. You can also focus hard on objectives with Mandalorians and Pathfinders who can “deep strike” onto an objective or have the mobility go after your opponent’s objectives while being extremely resilient. Remember that you have hope. Rebellions are built on hope.

Grand Army of the Republic

With warriors cloned from the most feared bounty hunter in the galaxy, and led into battle by members of the Jedi Order. Republic is seen as the “Elite” Faction as their basic troops can easily match up against the other factions’ superior units. The unique mechanic the Republic brings into the game is the ability to share the game’s various tokens among the clones as well as pumping more shots into a target with their Fire Support ability that is shared in their basic troops. Granted your force may be fewer but with Brothers at your side, you’ll always have your opponents outnumbered. Though a Jedi General does help.

Quantity has it’s own quality and the droid army of the Separatist come packed with loads of battle droids to swarm your opponents. On paper the basic B1 battle can be seen as the worst unit in the game as they shoot like stormtroopers and take hits like rebel troopers, but they are key to the separatist strategy. While other factions have limited control over their army due the game’s “Fog of War” mechanic, proper positioning of your troopers you can issue orders to most if not all of your army. Just be mindful of their AI, if they’re not issued an order they can only perform prescribed actions as their first action. Additionally, it’s home to one of the best tanks in the game with the AAT so if you’re an Imperial Guard player both your strats are represented here.

“This is Where the Fun Begins.” 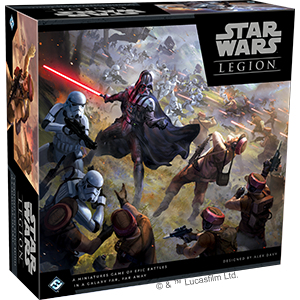 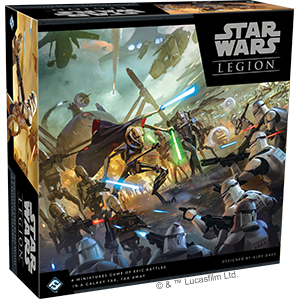 So you’ve taken a look at the models and found the faction that most fits your play style or just looks the coolest. The best way to start is with either the Galactic Civil War or the Clone Wars core sets since both will provide you with a commander, two core troopers, and a support unit along with the various upgrades, command cards, battle deck cards and unit cards. In addition to all the units you will also be getting a set of movement tools, range tools, dice and some barricades to be used as terrain along with a generous amount of the game’s tokens that you’ll need for the game. All this is at an extremely good price point and is often suggested to go in with a friend so you both can pick up a core set, trade the units inside as well as the games various tools. From there I would suggest picking up a 3×3 gaming mat and downloading the free Skirmish rule-set from the website.

Skirmish can best be described as the diet version of the game as it is a great place to learn the mechanics of the game from activation control, how to best utilize certain units. It is very beginner friendly and there are a set of deployment, mission, and condition cards that are balanced around the smaller point total and table. The nice thing about these battle cards is that they are very similar to their standard format counterparts so you can figure out which cards would be best for when you get a chance at larger games.

Legion is a rapidly growing game and at the time that this article is written Atomic Mass Games just announced the next expansions to the game will be based on the battle for Kashyyyk. This expansion will introduce Jedi Master Yoda, and new Wookies units for that can be added to both Republic and Rebel armies, while Separatists will see Magnaguard and a Super Tactical Droid that can be played as a named character or a second generic character. All these units will come with new abilities to the game and grant each faction additional options while forming their strategy. With a growing community of fans and plays, Legion will not be going away anytime soon.

So go down to you local game store or use their online store if they have one, pick up a core set and get playing. While we don’t plan on regular coverage of Legion at the moment, stay tuned for more articles in the future – we’re looking forward to helping walk you through the Journey.