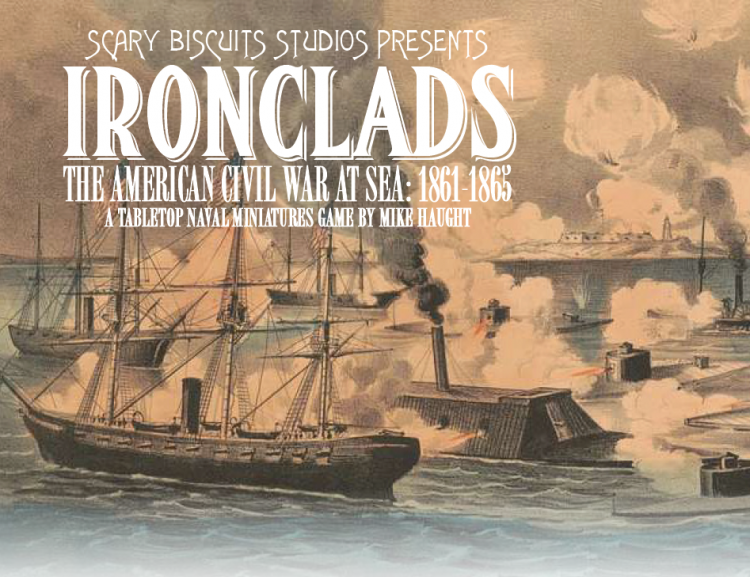 Ironclads is a 25 page ruleset that lets you re-fight riverine and ocean battles from the American Civil War using wood hulled ships, ironclads, tinclads, cottonclads, and forts. You can use just one ship or an entire fleet of a dozen ships. The game uses standard D6 dice, a 3×3 foot table, a bit of terrain (like islands or shoals), and some tokens you can print out. The great thing is that they’re free. 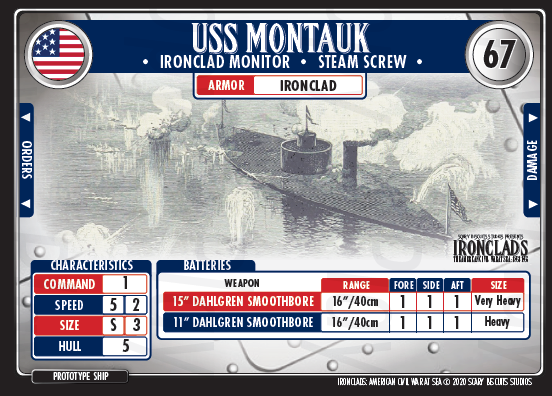 At its core, Ironclads is an alternating activation ship game with a damage deck and special orders that allow you to do more than just move and shoot. The author has created cards for dozens of warships of the time period that have stats for each ship. They’re clean, with awesome art from the period and easy to read text boxes. Each ship has a point value and set of guns. There isn’t necessarily a scale involved, though I choose to use 1:600 ships as they’re fairly easy to attain. Basing isn’t prescribed so whatever you have is fine. 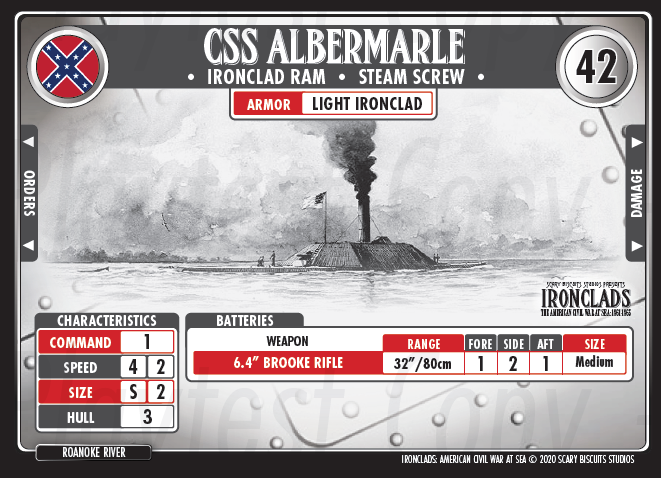 Players start each turn assigning orders to their ships. Orders allow players to do normally disallowed actions. Each turn your ship is going to move straight and you might get a 45 degree turn at the end. Orders allow you to turn at the start of your move, repair damage, evade, etc. There are eight possible orders, so they’re easy to keep track of. Most ironclads will have a Command stat of one. This means you put one order into its queue at the start of the turn, and it does that order. If a ship has a command stat of two or three, it goes into a queue with a first-in-first-out system (the queue must be full at the start of each turn). This means ships with a higher command stat are essentially slower to respond to orders, and orders players have assigned last turn might happen this turn when players aren’t as keen on them to happen. 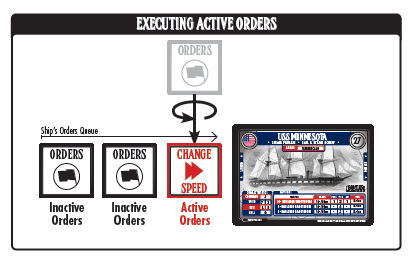 When each ship is activated, the player reveals the oldest order and chooses whether or not to use it, as it is optional. If the player chooses not to execute it they do not get a second order that turn.

Once the order has been finished, the player then moves their ship. Each ship starts the game at a speed chosen by the player (with a token placed next to the ship), up to their Speed stat – if you look above you can see the Montauk has a speed of five and the Albermarle has a speed of four. The second number is the acceleration – we’ll talk about that in a second. For each point of speed, the ship advances 2″ in a straight line. (Sail ships are different, but to be honest I haven’t messed with Wind stuff yet – I just want to fight with ironclads.)

At the end of the movement, the player chooses to change speed and turn. The ship can increase or decrease speed according to its acceleration stat. The Albermarle pictured above could decrease from Speed 4 to speed 2, or increase from speed 1 to speed 3, for example. It could also turn port or starboard 45 degrees. It’s possible to Reverse as well, but the ship has to go to zero speed first. All of these rules put together means players have to be careful in planning where they’ll move and when. If the ship moves off the board it’ll be considered sunk. If a ship moves into another there is a collision – many ships were actually built to be rams and this could definitely happen intentionally.  For the purpose of the review, it’s best to understand that the faster the ships are moving, and their angle of collision will change who suffers damage and how much – and it is very deadly. 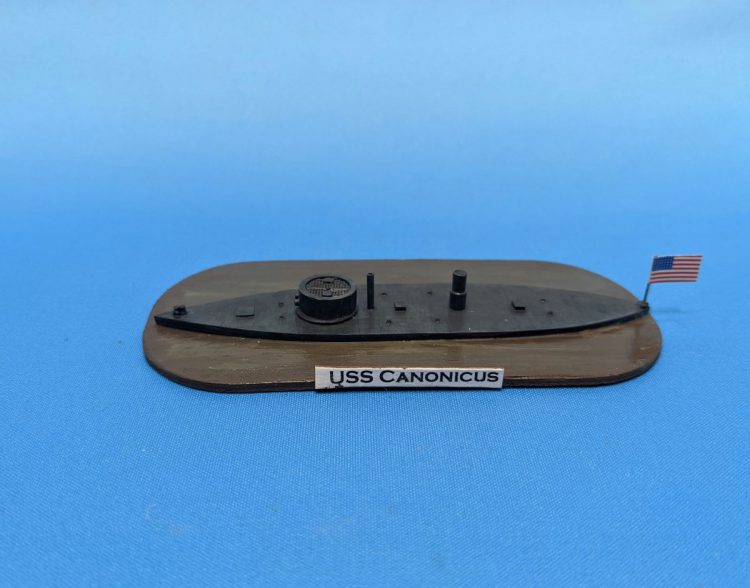 Shooting is pretty simple – first target a ship using an arc method and make sure there aren’t other ships in between blocking LOS. The Arc that is used will determine which guns the ship uses.

Each gun has an effective range. The gun can still shoot at targets over that range, it’ll just be harder to hit. If your ship has more than one battery it can shoot at different targets with each battery.

Then we get a Firing Solution to-hit number. This is pretty easy – take the size of the target and index it. Small ships start at 5+, medium are 4+, and large are 3+. Both ships pictured above are Small; many of the Monitor-style Federal ships are small because they have a very low profile. Paddlewheelers seem to be Medium, and very few ships or forts are Large. 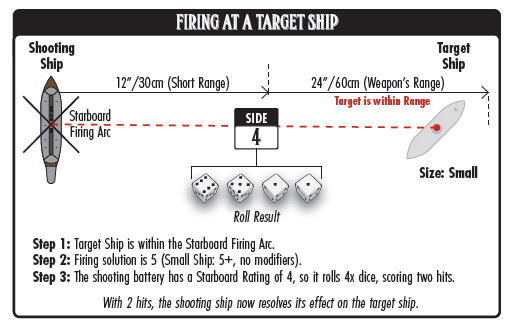 If the target ship is at speed zero it is considered Stationary and you subtract one from the hit number (ie. 5+ becomes 4+). If the target ship is within half range of the battery firing it is considered Point Blank, and again you subtract one from the hit number. If the ship is at long range (over the effective range) you add +1 for each 8″ over the range (so at 6″ over effective range, a 5+ becomes a 6+). Roll one die for each rating in the battery (for example, Fore 2 means you roll two dice). If you roll ahit then the enemy ship will have to save it or take damage. 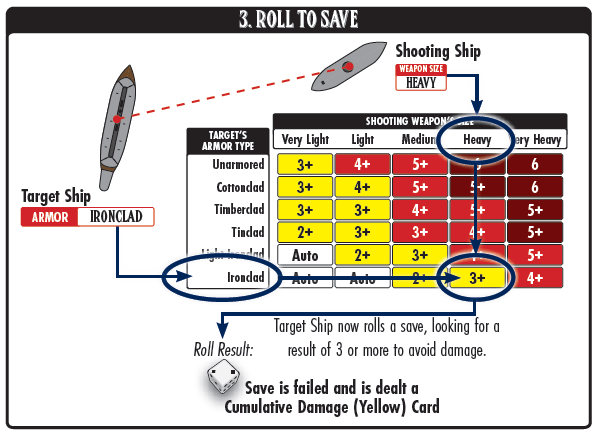 Index the Target’s armor type vs the weapon’s size and you get a save number. Predictably, heavier guns do more damage vs lighter armored targets. We actually had some trouble with this at first – I had lighter armored ships and my son had really heavy guns, while he had better armored ships and I had lighter guns – however there is a neat rule that if you get at Point Blank, you count your gun as one heavier type (you move to the right on the damage chart) and if you’re at Long Range move one to the left. This means it’s still possible for lighter armed ships to do damage if they get close.

On the chart above anything in maroon is an immediate wreck, while red is critical damage and receives a face up damage card. Yellow is cumulative damage and receives a face down damage card. This is somewhat similar to X-Wing or Star Trek Attack Wing in my experience, but the damage cards are definitely different. The ship might start on fire, lose turning abilities, slow in speed, etc. Boiler explosions happen too and they’re catastrophic and amazing. Ships will start taking on water and if it isn’t repaired (in the end phase players can repair one damage card on a dice roll) you’ll sink eventually. 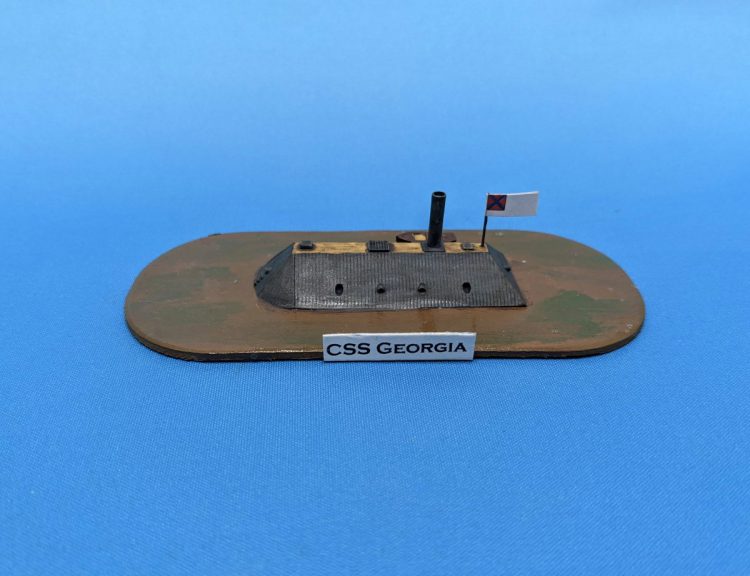 Does it represent the equipment and tactics well?

Simply put, it does. At the time of this review, there are dozens of ships and forts available as stat cards, and each gun type is statted out and works well. In order to do damage the smaller ships will have to get close and possibly ram, which definitely was a tactic used during the war.

Besides the main rules there are also rules for fortifications, mines, obstacles, riverbanks, draft depth, tides, islands, storms, choppy sea, etc. These all add depth to the game and allow you to build your own scenarios based on things you’ve read, or just imaginary battles for a campaign.

There are also standard scenarios for what I would consider Matched Play. Each ship has a points value and there are six standard scenarios with objectives and terrain. This is incredible for an ACW naval game as many are only set up to do certain scenarios (with points to Hammerin’ Iron for having a points system and standard tournament structure). 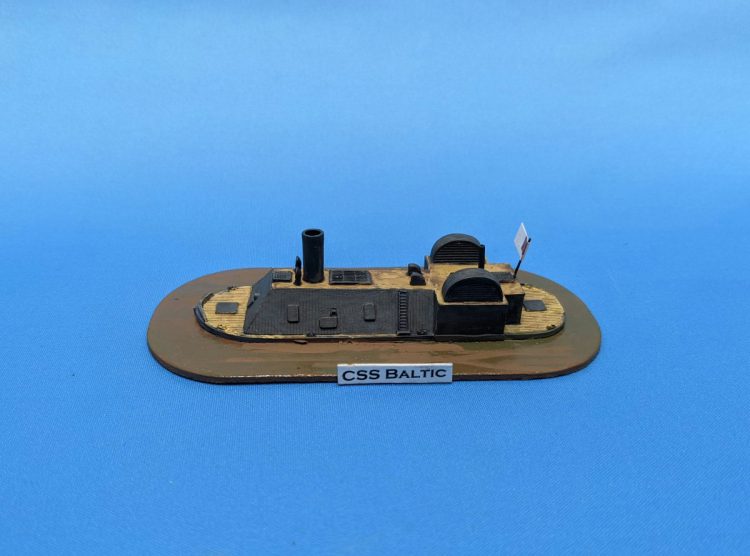 What models should I use?

You can use any you like, really, but I have a few recommendations. First would be Thoroughbred Models 1/600 scale ships. These are amazingly detailed models in pewter that paint up really well. There isn’t a whole lot other to say – they’re great. In the UK, Peter Pig sells 1/600 Ironclads as well and they look great. Of particular note is the huge variety they have, as well as accessories and forts.

3d printing has introduced a ton of new options as well. Brown Water Navy sells tons of great options on Shapeways that aren’t available in other places. Be careful purchasing or printing random designs you see on sites; many are under-detailed and generic.

Ironclads is a great ruleset that gets players into action quickly. It is modern, with alternating activations and doesn’t include huge tables with tons of damage tracking. The materials are professionally designed and slick; it is easy to print out and play later that day. The author engages with players on Facebook with questions and comments, also providing tons of historical background for players who need help painting or choosing models. I’ve been casually searching for years for an Ironclads ruleset to use without having to get a degree in accounting, and I believe I’ve found it in Ironclads. Check this game out now!