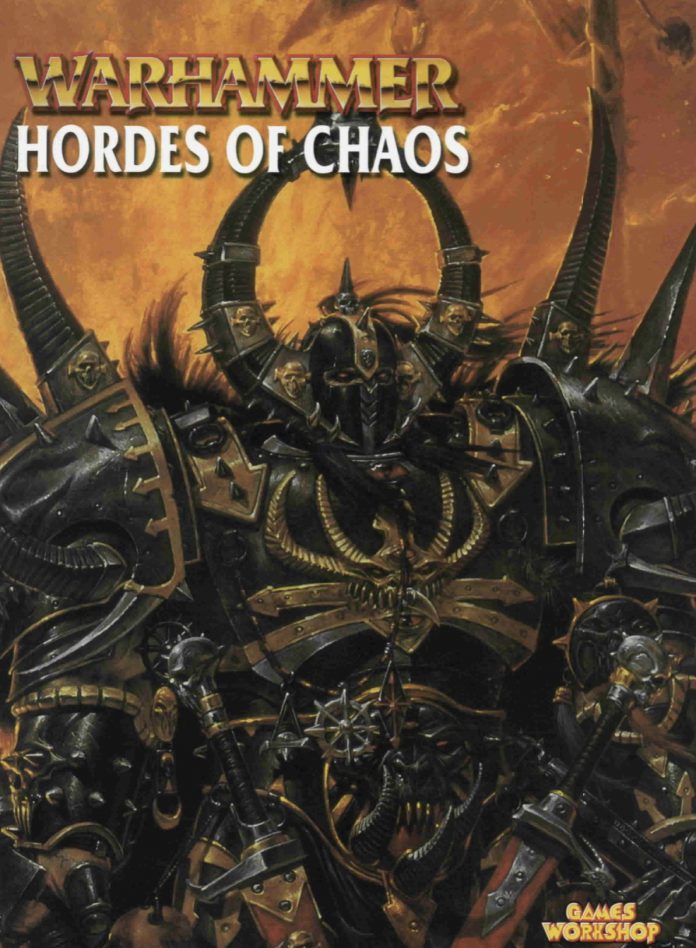 Why Play Hordes of Chaos?

You want to play the bad guys. Hordes of Chaos has it all: heavy metal knights, barbarians, daemons, monsters, wizards and mutants. This is also the army for the hobbyist who loves to convert their models; where just about any bizarre creation will go. Chaos allows the intrepid painter to fully express themselves, anything from solid black to kaleidoscopic coruscating iridescence.

What’s in this Book?

First off, this book is filled with great artwork. The cover depicts Engra Deathsword, Destroyer of Praag painted by Adrian Smith. That cover sets the tone for a grimmer, more realistic take on Chaos. There are tons of detailed illustrations by John Blanche, Alex Boyd, Paul Dainton, Karl Kopinski, Ian Miller, and Adrian Smith. The work of Blanche and Miller tends to fall to the backgrounds and decorative elements, with the more gritty, realistic illustrations taking the fore. They also presage the direction taken with the model range over the years to come.

This book also contains all the requisite lore, with descriptions of the Realm of Chaos, the Chaos Gods, and those who serve them. Many of the flavor stories focus on showing what life is like for the warriors and tribesmen who call the far North home. Chieftains attain godhood and villagers feed their relatives who have become spawn, hidden away in caves.

The hobby section of this book contains over 30 full color pages of models, as well as painting and modeling guides. There are lots of great shots of the studio army, staff work, and Golden Demon entries. They also put effort into providing examples of color schemes for the different gods.

For the named character section there is short run down of the older heroes; Arball the Undefeated, Egrimm Van Horstmann, Dechla the Denied One, and Valnir the Reaper are introduced with the suggestion they might inspire you to create some characters and try out your own rules for them! The two named characters who actually receive a full presentation and rules are Archaon, Lord of the End Times and Galrauch, First of the Chaos Dragons.

Archaon comes in at a whopping 855 points. He rides a Demonic Mount that has an additional attack and an additional point of leadership. His stat line is similar to a Lord of Chaos but with improved weapon and ballistic skill, an extra wound, one less point of initiative, and plus one leadership. The magic items he comes with grant a 1+ armor saving throw (never reduced to less than 3+) , the ability to double his attacks for one close combat phase (but rolls of one will strike himself or friendly models), a re-roll on break tests for friendly units within 6″, he causes terror in enemy units, and finally, a 3+ ward save.

Galrauch was the mount of the High Elf dragon prince Learfin. The dragon consumed a Lord of Change after it slew his rider, and was warped by its foul energies. His head split in two and his skin flowed like water. Rules wise Galrauch is a Dragon with beefed up initiative and leadership, with all the abilities of a Lord of Change. He’s a level 4 sorcerer with lore of change and the greater daemon’s daemonic gifts. Once per battle he can use Breath of Change instead of the normal breath attacks. Targets must pass a toughness test or succumb to uncontrollable mutation resulting in removal with no saves. Galrauch must make a leadership test at the beginning of each turn that determines if he fights as normal, does nothing, or is controlled by the other player as his former spirit temporarily regains control.

There is a section called “The Dark Tongue” containing a set of root words along with prefixes and suffixes in the language of Chaos. These allow you to build thematic names and places for your army’s background. This is followed by a page of chaos runes to represent the various letters and numbers used in the Dark Tongue. These are great for adding to banners and developing extra layers of detail if you really want to dive deep in the creation of lore for your forces.

Chaos Sorcerers without a Mark may choose to generate spells from the lores of fire, death, or shadow; while those marked for Slaanesh or Nurgle use those spell lores. The lore of Tzeench is reserved for Chaos Lords and Champions who take the Mark of Tzeench, being incredible fighters and wizards. Each Lore has six spells which are randomly generated with a D6, except Tzeench who has 7 (any spell generated may be swapped for Red Fire of Alteration).

The army list has a unique organization in this book. In 6th Edition the troops of each army were broken into Core Units, Special Units, and Rare Units. The point value of the army determined how many of each you could take. For Hordes of Chaos the choice of a Mortal or Daemonic General determines which units are core or special; with a Mortal General mortal units become Core and daemonic units become Special, with a Daemonic General daemonic units are Core and mortal units Special. The 2003 Beasts of Chaos book follows the same scheme; with it you can add Beast Units to your Hordes of Chaos army as a Special Unit, or use Mortal and Daemonic Units under your Beast General as Special Units.

Marks of the Dark Gods

Your choice of Mark also affects your army composition. Along with marks for the four major chaos gods, this edition introduced the Mark of Chaos Undivided to Warhammer Fantasy. Marks can be given to any Lords and Heroes (except Greater Daemons), as well as Warriors, Knights, and Chariots of Chaos (daemons are considered to have the mark of their god). If your General bears the Mark of one of the gods then other characters and units in the army may only have the same mark or be considered as Chaos Undivided. A General bearing the mark of Chaos Undivided may have any mix different marks in their army so long as other characters have a matching mark on at least one unit. This allows for quite a lot of customization to the army and for you to give it your own flavor.

Each mark gives your unit or character a thematic bonus, varying in effect and price depending on who is receiving it. In the 5th Edition Realms of Chaos book only Characters could take marks; the expanded options allow for more thematic armies and great conversion opportunities. The Mark of Chaos Undivided gives a re-roll to failed psychology tests and is free. Marks of Nurgle give an extra wound and add fear to characters and fear to regiments and chariots. Marks of Khorne grant frenzy and add dispel dice. Marks of Tzeentch turn characters into sorcerers who can wear armor and makes units generate power dice. Marks of Slaanesh make daemon characters always strike first and grant immunity to psychology to everything else.

Your general may be chosen from some of the most powerful mortals in the Old World. A Lord of Chaos with the Mark of Tzeench riding a Chaos Dragon can clock in at over 900 points! Exalted Sorcerers of Chaos are the way to go if you are looking for a wizard lord. Your choices for heroes are Exalted Champion of Chaos, Aspiring Champion of Chaos, and the Sorcerer of Chaos.

The core mortal units for this army consist of Warriors of Chaos, Marauders of Chaos, Marauder Horsemen, Knights of Chaos, Chariots of Chaos, and Warhounds of Chaos. The Warriors and Knights will be your elite troops, which can be upgraded to Chosen, adding Chaos Armor (4+ save) and an extra attack. Notably, it’s still the old Chaos Warriors kit – the new ones wouldn’t come out for another few years.

Your Marauders will be the bulk of the mortal troops (especially at lower point games). The Marauder Horsemen are Fast Cavalry making them quite mobile. Overall I like the feeling of building a tribe of Marauders with the Warriors and Knight being their most skilled warriors, accompanied by pack of war hounds.

Your choices for Daemonic Lords are a Daemon Prince or any of the four greater daemons. The only Hero is the Exalted Demon, who counts as two Hero choices. The rundown of Daemonic core units is about what you would expect: Bloodletters and Flesh Hounds for Khorne, Plaguebearers and Nurglings for Nurgle, Horrors and Screamers for Tzeench, and Daemonettes for Slaanesh. Notable changes from the previous edition are the removal of the Pink/Blue Horror distinction and lack of mount options for Daemonettes. Both of these would be revived later.

Rare choices for this army consist of the Spawn of Chaos or a Dogs of War unit. The spawn may be upgraded to a Beast of Nurgle, a Fiend of Slaanesh, a Bloodbeast of Khorne, or a Firewyrm of Tzeench.

This Army book coincided with a refresh of a good part of the model range. All the lesser daemon units received new models. Of the mortal units only the Warriors of Chaos (redone in 2004 for Storm of Chaos) and the Chariots of Chaos (not to be redone until 2013 for eighth edition) had older models still; both were introduced in 1997 and 1998 respectively, with the 5th edition Realm of Chaos army book. Marauders make their debut in plastic at this point. Amazingly, this kit is still used in AoS today! Some of my favorite models from this range are the Knights of Chaos, the Marauder Horsemen, and Horrors. These knights are just your classic Chaos Knights, well proportioned with interesting details. The Marauder Horsemen look like they rode right out of Conan. Horrors of Tzeench rank among my favorites because these models exude chaos. Their sculpts appear to be frozen in mid mutation. Many of the metal models of this era have a certain amount of character to them that gets lost in later plastic updates.

This army book is full of interesting details and builds the world of Chaos in a satisfying way. Sixth Edition Fantasy trimmed down some of the wilder aspects of previous editions and brought the focus more toward creating a balanced army where lowly infantry was important. The Hordes of Chaos book does this while still allowing so many options for doing what you want with the army. You could do just mortal, just daemons, both together, or get really granular with one god for mortals or daemons. The options are many and this book allows you to do what you want.