We’d like to extend a thank you to Army Case for supplying the painting handle used in this review, free of charge. I’ve been using this for about 2 months now, that’s always why there’s paint speckled all over it.

If you’re a miniatures hobbyist then you’re a painter; or at least you probably do some painting, to some degree, sometimes. There’s a plethora of hobby accessories to aid in your painting and one tool that’s been springing up in the last few years is the painting grip. One of the best features of a paint grip is helping you keep your hands and fingers off of the model you’re painting. When moving a model around to reach awkward areas it can be too-easy to get your fingers on parts you’ve already painted which can rub paint off those areas.

Army Case predominantly makes magnetic carry cases of various sizes to transport and store your miniatures. I’ll be covering their Kane case in another review at a later date. However they don’t make just cases any more and now sell a 3D printed painting handle which is unsurprisingly magnetic and lightweight; keeping in line with the company’s ethos. You can get it in a bunch of different colours and it comes with 5 different heads that are easily attachable, each giving a slightly different grip.

The Good, the Bad, and the Magnets

Disclaimer: I’m using a cheap kitchen scale that I bought a couple years ago when I told myself I was going to actually measure ingredients for baking. That never really happened. But at least I can weigh painting handles, I guess.

The grip is 3D printed and designed to be as lightweight as possible – coming in at 27g for just the handle and 17-18g for each of the head attachments – it’s a light little handle. That’s a total of up to only 45g. From talking to the owner and designer, this is by design. As a hobbyist that has struggled previously with other painting handles, whether they were simply too thin or too heavy for long use, they wanted something that was easier to use in longer painting sessions.

To put that into some context, the original Games Workshop paint handles were 54g and 102g, respectively (regular and the XL for dreads etc.), while the newer, very thin one is 31g; the Redgrass handle is about 51g including the putty that it comes with. That makes this only slightly heavier than the newest GW handle while having a wider, comfortable grip with the magnets built-in.

The heads attach via magnets and so easily turn with a small amount of force. There’s enough friction that they don’t spin by mistake or from simple gravity but easy enough to move that you can naturally and smoothly turn the model you’re painting to get to different areas with ease. The magnet’s under your models’ bases don’t have to be lined up in any particular way or polarity either, the entire surface is equally magnetic.

I’m also just really clumsy and I’ve already dropped this a bunch and knocked it off my work station with my elbow because I live in a 1-bed flat in London and don’t have much space.

Ok so these don’t actually have bad features so much as they’re just less convenient in two specific ways. I just wanted to make the pun, ok?

The top-heaviness of the handles that will matter more or less depending on what you’re working on and really this is a common problem for all paint grips and will be exacerbated if the model you’re painting is also top-heavy or unbalanced. To state the obvious: Models are often just kind of heavy, especially larger/chunkier ones or if you’re like me and even have some *gasp* metal ones to paint sitting in your backlog.

When painting 40mm base models if the magnet under the base isn’t particularly strong the edge of the base and the edge of the handle head can be a little awkward. I found this really only affected me in any way while painting heavier resin figures on the base where they moved around a bit while heavy drybrushing – I put a second magnet under the base and it wasn’t really an issue any more. Models on larger bases would work

I’ve caught up with A-Case since and there will be a 50mm head soon available to alleviate this problem. It will be available in coming months and will be sold on its own; it has the same fitting as the 40mm heads so will fit onto the same grip.

Each grip has 2 magnets built in: One in the top to attach the different heads and one in the bottom. Obviously to make use of this you need to have a magnet glued under your model – or at least somewhere on your model, depending on what you’re working on. If you’re using a magnetic carry case, whether it be an A-Case or other solution, then this isn’t a problem at all. You’ve already glued magnets under your bases. I use N52 magnets under my bases, either 5x1mm or 6x2mm depending on the model.

Going back to my earlier note about the grip being top heavy: The magnet in the bottom of the handle can act as a solution. Since I had an army case tray spare I just set that up next to my painting workspace to place the handle on. The magnet kept it sturdy and upright. Easy. If you have a permanent-enough space where you paint get some magnetic sheet and stick it down to your desk, then a thin strip should be all you need and you could even stick it to a vertical spot if you’re really lacking for space. I’ve even just stuck it to my microphone boom arm on a few occasions.

Something I’ve done to paint faces (like on my Rogal Dorn) was to use a very small amount of glue to attach it to a small magnet so that I could use the handle, and simply and carefully remove it after without harm. 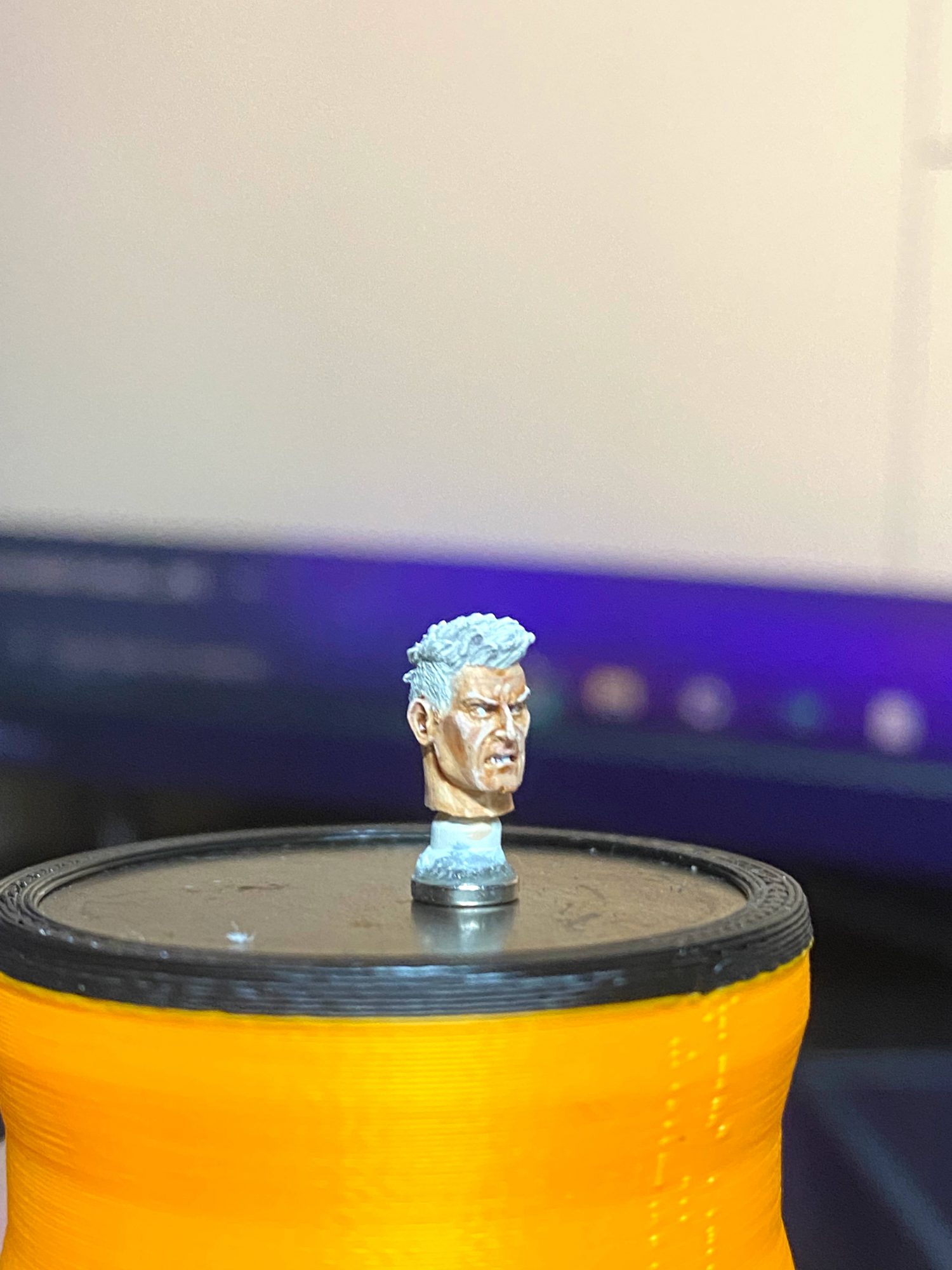 I’m a fan of this paint handle. I’ve used a few others in the past but have put them away pretty quickly for one reason or another but have been using this very consistently, especially for characters or doing units of up to 5 at a time. Especially Conquest minis since their round bases are so small compared to how large the models are.

If you’re looking to pick up a painting handle, either a new one or one for the fist time, it’s hard to go wrong here. Even more so if you already magnetise your models.