Helsreach: The Animation — You Might Have Heard of It 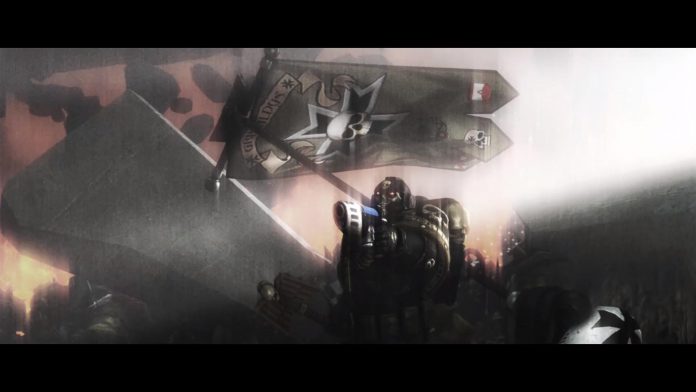 It is not particularly surprising Helsreach: The Animation is good, given what’s come out of it since; a partnership with Games Workshop to create the Angels of Death series, general acclaim, even just the thing actually getting the funding and support it needed to be finished. The general imprimatur of quality is clearly there even just in its fresh legacy. But it’s still worth looking at why, specifically, it’s so good.

It’s not the material, not inherently. The material is fine. It’s a Space Marine story. A planet is threatened with great violence; the Space Marines arrive; they are alternatively haughty and tender to the various normal-sized people around them as they deserve; the enemy attacks; almost everyone or everyone dies; very pointedly, no real lessons are learned outside of squad-sized personal development. There are lots of these; I, personally, am not particularly disposed in their favor as a reader or a viewer, since they involve many of the same things every time. It’s an adaptation of the novel of the same name written by Aaron Dembski-Bowden, and the script of the animation is mainly created through cutting down the original novel’s narration, saving it for specific character moments and internal monologue, and letting the animation do the work when description is called for.

This frames one of the big hurdles the animation has to jump: whereas comics are the marriage of words and art to create a narrative, animated features are art and imagery-forward as media. The presence of a narrator constantly telling you what is happening on the screen is unforgivable. You should be able to see it! You should see it instead of being told it. And this hurdle Helsreach: The Animation clears quite well. There are some fits at the start — a bit too much narration at the very very beginning, combined with a studied lack of narration for the first big fight between the Imperium command officer and the ork war leader happening in the story’s past, combine for a tentative first step — but the animation finds its footing here quite quickly. By the time we’ve reached the middle of the runtime, the narration is only needed in moments where an especially internal point needs to be made by the main character and narrator, Grimaldus.

There’s a lot of it; back to back to back and with whatever backwards-reaching augments Boylan made for the final product, it’s two hours and thirty minutes or so. It’s interesting to watch the style evolve over its length — it starts with a recognition that whatever process is being used can’t create the depth of color and fidelity that Boylan wants on his budget, so it’s black and white, with marker inks over the CGI work hiding, perhaps, some of the simplicity of the modeling and meshing. In some places this is excellent; in others, such as during the aforementioned fight between the Imperial officer and the ork warboss, it gets muddy in its dynamism and unhelpful in its fidelity; when something explodes and wreckage dust booms down the city streets, it’s like actually having sand thrown in one’s eyes, rather than something in a proper black and white presentation where it’s fulminous in its contrast. It’s clear why Boylan evolved away from it the moment he could.

And yet: there’s more evocation in how the husk of Princept Majoris Zarha Mancion is conveyed in the early, crude black and white than the full-color but somewhat wanting light of the work’s technology, fully-realized. As a mostly-untextured haze hidden and contorted by shadows in her tube, she was was less knowable and more abstract, literally as well as figuratively forcing the viewer to fill the character in; by the hour and forty minute mark we simply see too much of her, and she’s a gaunt zombie rendered from hardware generations past. This is part of why the Space Marines are an effective canvas for Boylan’s budget and scope: they keep their helmets on most of the time. The real costs of this sort of animation are in the faces and the hands. Those are best hidden at all times, by death masks and power armor.

I generally don’t have much nice to say about the orks of Warhammer 40K. I find them jarring when placed alongside the game’s other warring factions and intolerable when considered by themselves. They’re a joke just firm enough to be flavorful when bantering around the tabletop, and in that circumstance for me they land; anything more and…well, it’s a sort of cilantro gene situation, separating me from most fans of the fictional universe. This is to-date my favorite portrayal of the orks, because they’re not talking. There are no funny jokes about how their technology works, no sight gags, no ambient dialogue where they do one of their interminable bits about pecking order or where the next fight is. They simply fight like a terrifying alien wave, and die like a terrifying alien wave. Sure, it’s a normal unchallenging Space Marine story — but thank god either Dembski-Bowden had the discernment to recognize this and didn’t include futzing around with ork jokes in his original manuscript, or if he did, doubly thank god that Boylan took it out.

In the end what separates this from any other attempt at this sort of thing is the clear eye and skill towards storyboarding, cinematography, and blocking that Boylan displays. It’s a professional’s eye; it shows you immediately why he was hired to do professional’s work. There are issues here and there; for instance, while the quality of the direction doesn’t dip, there just isn’t anything as indulgent in the first half of Helsreach as the moment when Grimaldus rips the pilot of their dropship out of his chair and bails out with him as it explodes; the black and white would have rendered it as total mush. And there’s merit to that imposition of discipline from time to time; the slow-motion and time spent lingering on the explosion is a bit much. That said, this is exactly when the Salamanders show up…and that’s the sort of thing you want in color. By the end, the command of the technology is so good that the eye for contrast Boylan showed previously sometimes gets lost in the “realism” — the final night fight between the great Mechanicus titan and the big ork war machine nearing the end of the runtime is too dark.

It is, in final summary, one of the most impressive rough drafts that’s ever been made of a work on this scope. Actually finishing it to spec would take an equally large, if not larger amount of effort that is frankly unnecessary; you get the point, which is the depth of the creator’s skill, quite early on in the affair. By the end, all you’re doing is playing out the string of a story you know the ending to, even if it’s your first exposure to it. It will be much more interesting to take a look at what he and the rest of the creative team are doing on Angels of Death…which I’ll begin doing in this space soon.

If you haven’t seen Helsreach – the work that arguably sparked Warhammer+ – you can still catch it over on YouTube. And if you have any questions or feedback, drop us a note in the comments below or email us at contact@goonhammer.com.