How Fast Do You Think I Can Paint This Bastion? Wrong, It’s Faster

We all have our own Roads to the GHO. Mine, for the second year running, goes through a pile of terrain. Last time it was 25 tables of MDF buildings, this time around it’s a smaller amount of plastic fortifications. This ended up being both a blessing and a curse.

The good news is that instead of 200 or more structures, it’s a mere dozen, and they’re mostly built already. The bad news is that I can’t draft a bunch of sickos to help me out in a parking lot, and, unlike the MDF buildings, this all needs to be painted. The other bad news – which is good news in every other context, and only bad in the sense that it cuts into how much time I can spend on Warhammer or sleeping – is that this time around I have a small child. Thus far I’ve been sinking hours into a Fortress of Redemption, since it is the largest and most Dark Angels of buildings, and so it commanded, rightfully, the most effort, but the clock is ticking. A degree of efficiency is needed here. The other major requirement is that I need this to not look like crap. That is important above and beyond even the speed constraint, or I will suffer the harshest of consequences: Rob will get mad at me.

There’s an old saying in computer janitoring that premature optimization is the root of all evil. The corollary that I’ve always attached to that is that being able to tell what’s premature and what isn’t is how you separate junior engineers from seniors. What it basically means is that you don’t ever advance to a point where you aren’t cutting corners, you just get better at learning which corners can be cut. Sometimes you can speed things up by half-assing what does not require a full-assing, and other times you will drastically ruin your day by using even as little as one-eighth less of an ass than required. You can’t cut back on assing. You will regret this.

To wit, I have a built and unprimed Imperial Bastion, I don’t own an airbrush, and I am running out of time.

An advantage I had here was having a fully-painted bastion in roughly the scheme I wanted to match, so I was able to use it for reference. This speeds things up because I no longer have to waste time on thinking. I can simply put paint on the model, following the template provided.

The first step was to prime the entire thing black. I didn’t take a picture of this, but you can probably guess what it looked like. 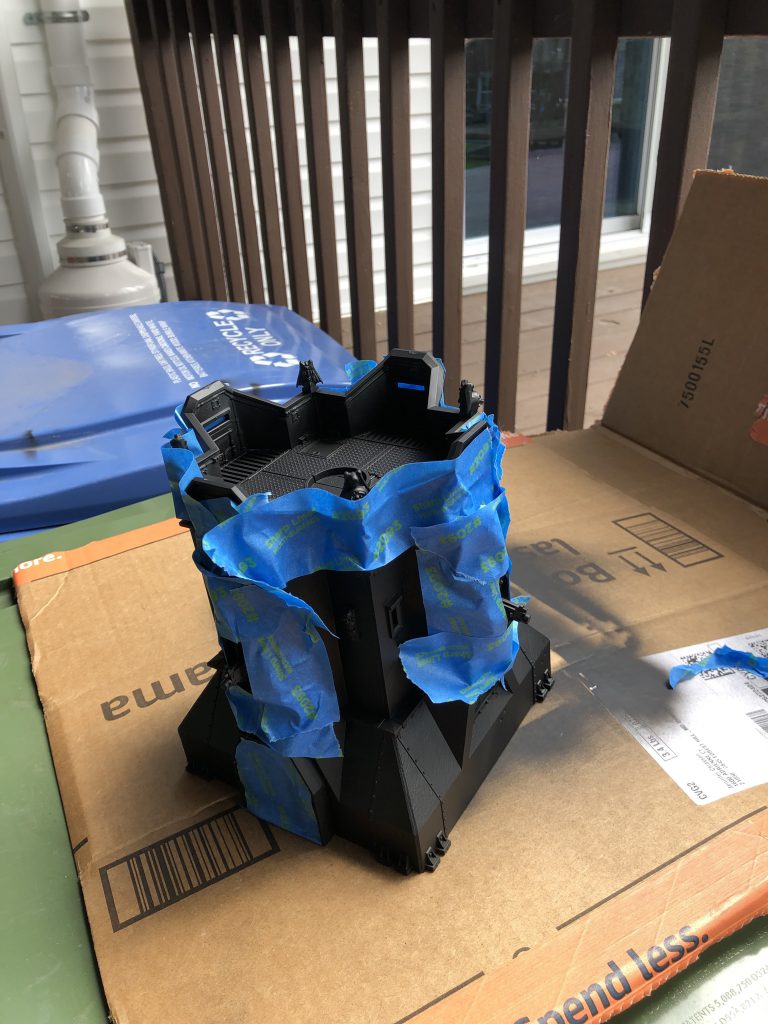 Next, mask around the outside of the battlements and the gun ports – the large areas that will remain metallic – and spray some silver inside those. 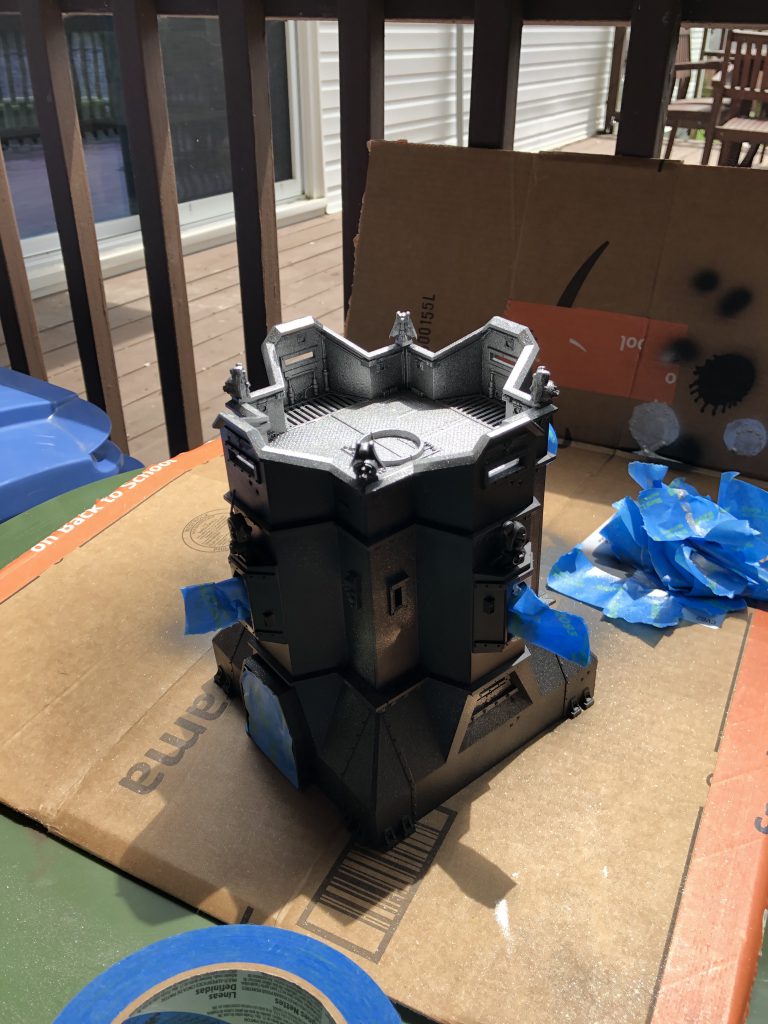 Then remove that masking tape, and basically reverse it: mask off the inside of the roof, the gun barrels, and cover up the door panel as well. Obviously we don’t want to ruin the silver spray we just laid down, but the door being left black helps break up the green, plus it was done that way on the sample. Spray whatever is still visible – this is broadly defined as “the walls” – Dark Angels green, of which I was always going to have a can. 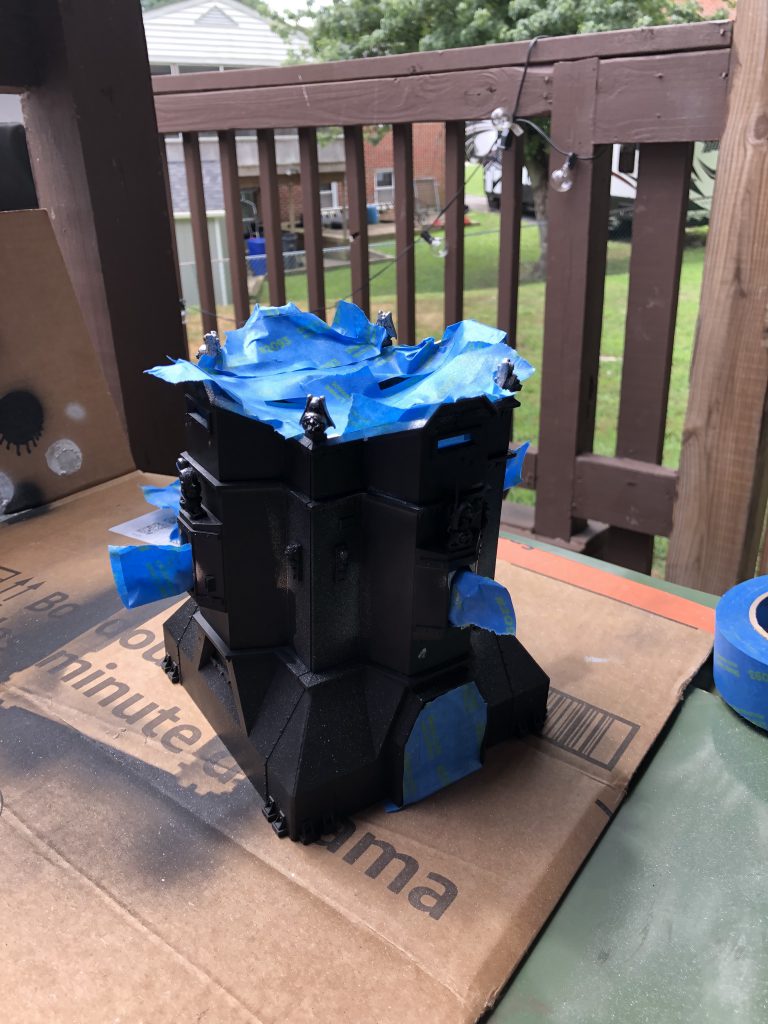 The masking did take a few minutes, but I think it paid off. Without access to an airbrush, the only way to get speedy basecoats down is rattle cans, and in this case I lucked out and had the exact colors I needed.

Twenty minutes of work, including waiting for the paint to try, this is where we are. It is technically three colors and thus legal as hell: 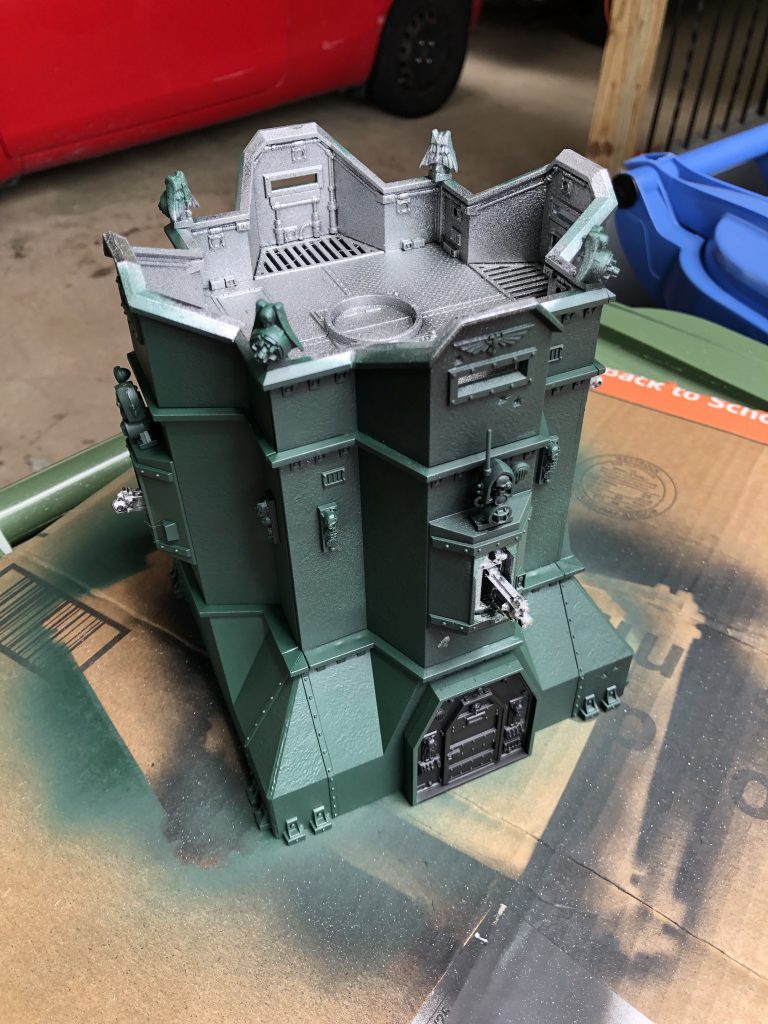 So, two main areas of concern here. One, throw a black wash down on all the metals. Easy enough. Two, we’ll need to layer up the walls to provide a bit more color and texture. Comparing our bastion to the provided example, it looks like there were a couple of heavy drybrushes applied. I tried this, and doing it sucked with the brushes I had, so I went in a different direction, and tried stippling with a sponge.

I grabbed two paints, Vallejo Yellow Olive first and Camo Green layer, and a couple of off-cut pieces of KR foam (always keep the spare foam, for this exact reason), and set to work. The trick with this is not to glob on too much paint at once, but if you do, it’s also fine, you can smush it around and it blends pretty well. Put some paint on the sponge, tap most of it off, and then start daubing it all over the model. Like a drybrush, this will naturally catch on the raised surfaces and edges, and give a nice irregular pattern based on where it contacts the rough texture of the model and how the paint is loaded. Unlike a drybrush, it doesn’t take a million years and you can’t screw it up by overloading – worst case just smush the paint around. It builds up color slowly, but not too slowly, and once I got bored with the dark green I switched to the lighter shade. At this point the model is 90% done by area, and 50% done by effort. 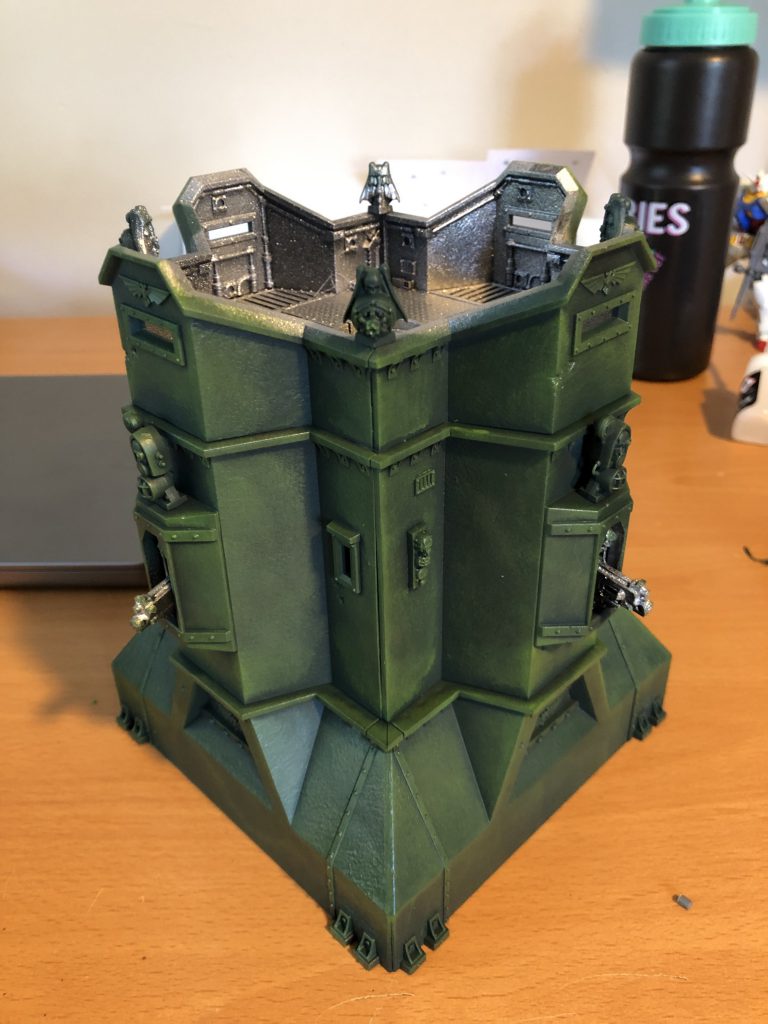 This is where I had to slow things down a bit, and practice actual brush control (this is actually, if you’ve been reading, the first time I used a real brush at all). This contains all the little details that make the model pop, and after using exactly 2 real (non-wash, non-spray) paints to get to this point, I now busted out twice that number to finish up. 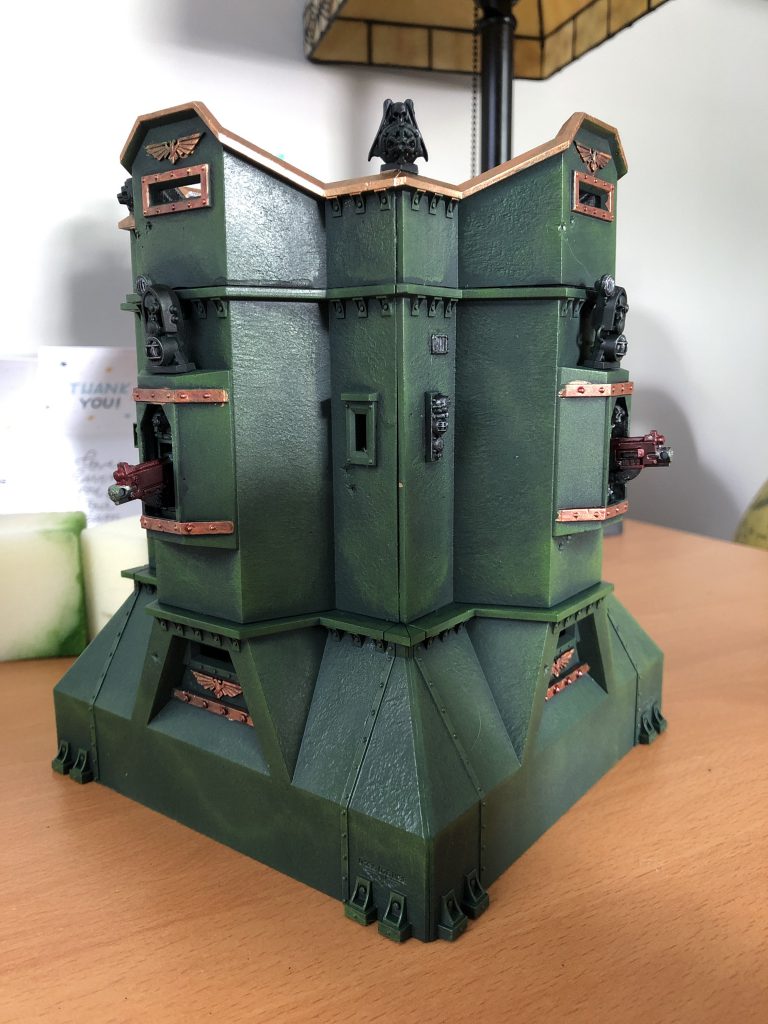 This is just one of those pesky uncuttable corners I talked about. I can’t skip this part, and it requires slowing down and being more accurate instead of just slamming paint on. Not that careful, this isn’t a character model and you can get away with not edge-highlighting every single rivet on a huge-ass building, but still: take the time and do it right.

Total: Hour and a half, ish.

In terms of time, this is Not Bad! And as far as the quality, I think it came out pretty well. We have successfully maximized our metrics for the sprint. I’m comparing it to the other Bastion, and while this one isn’t going to win any awards on its own merits, it’s not noticeably worse than any given Standard Unit Of Terrain either. The colors don’t match either, but I actually kind of prefer the green I got here. I’m also realizing as I look at it that the other one didn’t have all the weird little sirens and other gribblies, so I had to do extra work. This sucks.

At the end of the day, getting paint down on this thing quickly was only half the job. This isn’t a model I’m painting for myself, to put on my own table, where I can do a basic job and then spend years telling myself I’ll finish it up later when I know full well I have no intention of ever cleaning up my mistakes. This is part of the Official Goonhammer Terrain Cache, and is going to be used – by paid ticketholders no less – in the Narrative event at the Goonhammer Open later this month. I had to respect that, and what our event attendees deserve out of a Goonhammer event. It didn’t just have to be painted, it had to be good enough. Otherwise, again, Rob would get mad at me, and I can’t have that.

I won’t be there, but the building will be. Please do not break it, or make fun of the paint job too much.