How to Paint Everything: Daemons of Khorne

In our How to Paint Everything series, we take a look at different armies of the Warhammer universe, examine their history and heraldry, and look at several different methods for painting them. With the release of Engine War we’re looking at the forces of the Chaos Daemons, and this instalment is dedicated to the Lord of Skulls himself, Khorne.

Who are the Daemons of Khorne?

Khorne is the Blood God, who sits on a massive throne of Skulls. He’s the god of war, rage, anger, hatred, and violence. Khorne’s existence is fueled by violent acts, and every violent killing – whether it’s done in his name by his followers or done against his followers, Khorne cares not from whence the blood flows – fuels Khorne’s power. Khorne detests all magic and trickery in combat, and hates Slaanesh most of all, finding the tastes and decadence of the God of Excess to be an anathema.

In some more positive portrayals, Khorne can also be seen as the god of martial honor, physical prowess, and bravery, though more recent depictions of Khorne’s followers suggest that Khorne is more focused on mindless rage and violence these days. Khorne’s daemons are indiscriminate killing machines in battle, bringing daemonic axes and swords to bear on their prey.

In the 40k universe, the primary followers of Khorne are the World Eaters Chaos Space Marine legion, the fallen sons of the Daemon primarch Angron. In the Age of Sigmar, Khorne’s followers are the Blades of Khorne, an alliance of daemons and mortals for whom the very act of waging war is a means of worship.

Where to read more

There aren’t really books “about” Khorne so much as books about the followers and champions of Khorne. In that sense, Khorne’s followers are typically antagonists but there are some good works in the Horus Heresy and Warhammer 40k universes that make them the protagonists.

The Realmgate Wars books for Age of Sigmar also contains some stories that involve champions of Khorne. In particular, The Solace of Rage by Guy Haley covers a champion of the Blades of Khorne attempting to gain Archaon’s favor.

Depending on where you want to play Daemons of Khorne, you have options.

If you’re going to paint Khorne daemons, get ready to paint a lot of red. And skulls. And blood.

I first started doing Khorne Daemons when I started a Khorne Daemonkin army in 7th edition, adding them to a World Eaters Chaos Space Marines force to fill out detachments. Over time I’ve continued to add to them, turning them into a Daemons force in their own right.

My methods pre-date Contrast paint, but they’re pretty quick for the most part. I tend to mostly drybrush reds on the lesser daemons, using progressively lighter shades. 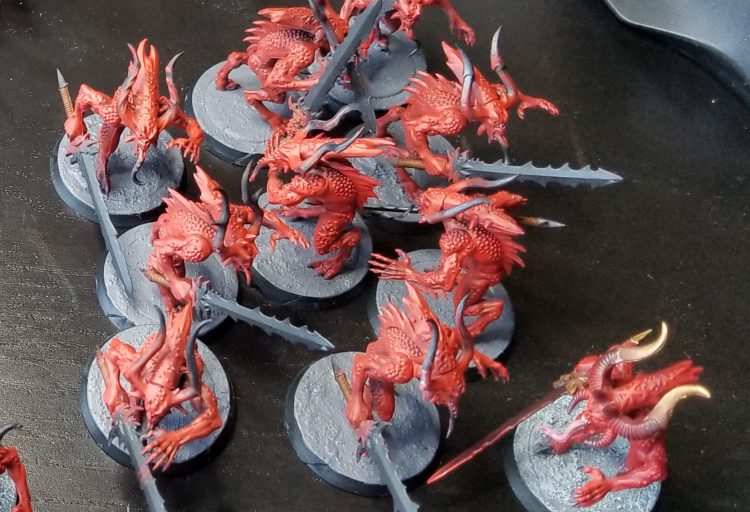 The Red skin: I start by laying down a basecoat of Khorne Red on the model, then I drubrysh that with Mephiston Red, going lighter in color/heavier in paint on higher areas of the model. Then I hit them with a wash of Carroburg Crimson, letting that darken in the areas between the muscles and spots, and then drybrush again with Mephiston Red. The goal is to have the Bloodletters darken toward their feet. 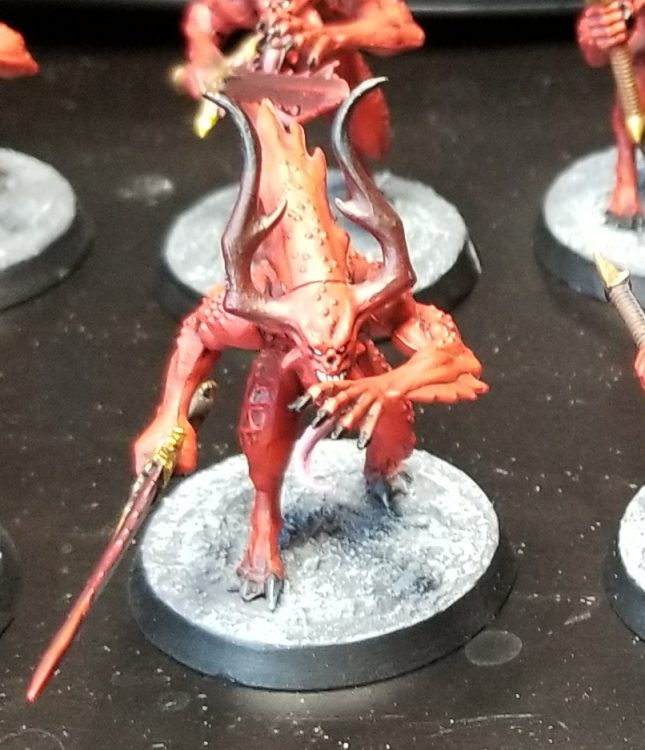 I’ll then follow this up with a drybrushed coat of Evil Sunz Scarlet, which I try to keep on the raised areas. I’ll also use it to edge highlight parts of the face to give them more definition. I’ll then hit the most raised areas with a bit of Jokaero Orange for the final set of highlights. For the Sword and the horns, I shade those going from Mephiston Red > Khorne Red > Abaddon Black, usually doing some wet blending to get them to the shade I want. I do the same thing for the swords.

Other Details: I then paint the toenails and claws black and edge highlight with Mechanicus Standard Grey. The teeth are Reaper Polished Bone, the eyes are dots of Reaper Pure White, and the tongue is Bugman’s Glow highlighted with Emperor’s Children Pink.

For something like the Bloodcrushers, you’ve got a lot more gold to work with. These I kept pretty simple, doing their armor in Abaddon black with edge highlights of Mechanicum Standard Grey, though if I had to do them again I’d highlight the black with a mix of Incubi Darkness. The gold here is just Retributor Armour Gold shaded with Agrax Earthshade.

If you’re painting Khorne models, you’re going to need to do some bone and skulls. I tend to do mine with Rakarth Flesh, then wash them with Agrax Earthshade and re-highlight with Rakarth Flesh again. If I want them to be even brighter or have more of a polished/bleached look, I’ll then highlight that with Reaper Polished Bone.

Some of your Khorne Daemon models have fleshy bits, like the Skull cannon. For those I started with a base of Bugman’s Glow, then washed with Agrax Earthshade and Carroburg Crimson to give it a darker, redder hue. I then highlighted the flesh with Bugman’s Glow and did edge highlights with a 50/50 mix of Bugman’s Glow and Reaper Polished Bone.

The Bloodthirster is a much bigger project and involved a lot more color than most of my Khorne Daemons called for. Specifically, some blues that aren’t normally part of the color palette I’m using. For his armor, I highlighted the black armor with a 50/50 mix of Abaddon Black and Reaper Midnight Blue and edge highlighted it with blues instead of grays. The flesh is basically the same process as my Bloodletters, only with some more detail work. 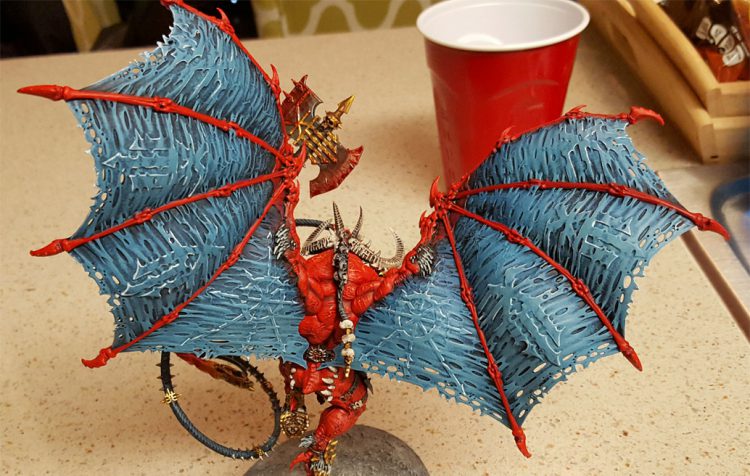 For the wings I started with a base coat of Reaper Midnight Blue, and then worked up from there to Altdorf Guard Blue with a bunch of thin wet-blended layers. I then mixed that with Reaper Snow Shadow to lighten it and drybrushed on a few more layers working up to lighter shades. Finally I did some edge highlighting with Snow Shadow and Reaper Ghost White to make the symbols on the wings stand out. The final result has a lot of color depth and realy makes the wings stand out.

These guys were sat on my shelf for a while before I was inspired use them to try out some Contrast painting. I primed them Wraithbone, which is the slightly warmer contrast primer and therefore perfect for Khorne Daemons. The goal here was to keep them simple, so I painted the skin and tongues Blood Angels Red, the swords Aethermatic Blue, and the horns and the metallics/sword handles Wyldwood. I then painted the metallics in Sycorax Bronze, drybrushed the swords with Baharroth Blue, drybrush the horns Rakarth Flesh and then Ushabti Bone (and also picked out the nails in Ushabti), and then the tongues in Emperor’s Children pink. Finally, I returned to Baharroth Blue to pick out the eyes – and that was that! The bases are just Astrogranite Debris washed Agrax Earthshade, with the Gamer’s Grass alien grass tufts which give them a weird look that suits Chaos. It’s all very simple – Daemons take very well to Contrast, and it’s a great way to get solid results with them very quickly.

Sunshine, lollipops and rainbows. Everything that’s wonderful is sure to come your way. When you’re in love to st…

Corrode: Hey Beanith, I see you’ve cheered up since last week when RagnarokAngel accidentally got the dates wrong and told you the stuff needed to be ready in three days time. Gosh wasn’t that a laugh?

Beanith: I bit through a paintbrush, panicked and drove across town in a rush to grab a spare daemon off a mate and was slinging paint around the room…

Corrode: Haha, that’s right. Now imagine how much more funny it will be when I tell you the article that was slated for Saturday is now going live today and we’re going to need that Daemon and your burbling now. That, or pictures of that web slinging menace. You know the drill.

Well that said, what could be more Metal than a giant red daemon armed with a cherry red sword riding an even larger daemonic beast of brass and iron, a nigh-unstoppable brute covered in metal plates? Red Pandas of course, but since I don’t have any of those, I’m going to show you how I quickly smooshed this Bloodcrusher of Khorne.

I undercoated this one with Grey Seer Spray and then smooshed all the armour panels with Leadbelcher Base. Then I picked out the larger panels with Contrast Blood Angels Red as well as the Bloodletter rider.

Next step was picking out the armour lines and icons with a brass colour. For this I used Army Painter Weapon Bronze. After that I picked out the horns and a few other places with Contrast Gryph-Hound Orange and a dab of Contrast Magos Purple.

Last step was to go to town with the Nuln Oil to dull the shiny bits and give it that nice gritty look. Bosh, job done son. Now excuse me while I go check the schedule and see what else has changed…

Blood for the Blood God

That wraps up our look at the servants of the blood god. If there’s anything we missed, or if you have any questions or feedback, drop us a note in the comments below or email us at contact@goonhammer.com.