How to Paint Everything – Grey Knights

In our How to Paint Everything series, we take a look at different armies of the Warhammer universe, examine their history and heraldry, and look at several different methods for painting them. Today we take a look at the loyalist Thousand Sons, they put the Psy in Psychic Awakening: the Grey Knights.

Who Are the Grey Knights?

Imagine Space Marines. Now give them all psychic powers and mind-powered weapons. Stick them on the Saturnian moon of Titan and charge them with a never-ending quest to fight Daemons. And you have Grey Knights. Oh, and now that I’ve told you about them, I have to kill you.

Founded near the end of the Horus Heresy (and interesting their founding brothers include a loyalist Thousand Son), the Grey Knights are a super-secret chapter of all psychic Space Marines that in many ways act as the militant arm of the Ordo Malleus and are dedicated to fighting the Daemons of the Warp. Unlike every other chapter of Space Marines, its members are not descended from one of the twenty Primarchs but instead their geneseed is derived from the Emperor himself, which is often called The Emperor’s Gift.

Of all the non-codex chapters, Grey Knights are easily the most unique and divergent. Aside from every battle brother being a psyker, their force organization is different and even their armaments are unique, with a mix of bolter weaponry and psychic-enhanced guns and melee weapons not to mention their distinctive Aegis Armour.

In battle, Grey Knights typically operate at the squad level in support of an Ordo Malleus Inquisitor and large scale deployments are rare. A rare exception was the First War of Armageddon where a full brotherhood was deployed (and mostly died) to fight back the Daemon Primarch Angron. Generally though, deployments of Grey Knights are small and highly secretive, consisting of precise Kill Teams sent to eradicate threats from the Warp. The existence of the Grey Knights is a closely guarded secret and for many years it was not uncommon for any Imperial soldiers or civilians that witnessed them in action to be executed post-battle or for fellow Space Marines to be mind-wiped.

Where Can I Read More?

Grey Knights are an interesting chapter but they aren’t heavily featured in Black Library fiction. A cursory search will reveal there is a trilogy of novels and you may become briefly excited but then you’ll see that it was written by Ben Counter and he sucks. So don’t read that.

Instead, read The Emperor’s Gift by Aaron Dembski-Bowden (yes, I know we recommend him constantly, it’s because he rocks) which recounts the events of the First War of Armageddon largely from the perspective of the Grey Knights. It’s an intriguing look at this unique and secret chapter and I know that the moment I finished the book I wanted to build a Grey Knights army.

Only months ago, the best recommendation for playing Grey Knights would have been don’t. Fortunately, there is a Psychic Awakening in the galaxy and the fourth tome, Ritual of the Damned introduced a host of new rules that really spiced up the way Grey Knights play and make them a fun force in 40K. We have a detailed breakdown of these changes and you can check it out here!

Grey Knights are also a potent force in Kill Team. As one of the two psychic-heavy teams in Kill Team (and in fact one of the only two that can use the psychic phase without Commanders) they have a unique playstyle that allows them to cast mind-bullets from anywhere on the board. They are a very elite force and at 100 points you’ll never run more than 5 models but that also means they’re quick force to paint up and get playing with.

Grey Knights drew my attention for Kill Team. A single Strike Squad box gives you all the models you need to build a ten model roster which can be deployed as several different 100 or 125 point teams, which makes them one of the cheaper factions to build a competitive list for. Additionally, their psychic abilities in Kill Team can be devastating, especially with Kill Team: Elites.

For my squad, I wanted to give them a bluish steel look what makes their armor pop. I always paint Space Marines in three subassemblies: the body, the head, and the backpack. Though my photos only cover the body and head, the exact same techniques were used on the backpack. All paints are Games Workshop brand, and should be easy to find at a local hobby store.

After some experimentation, I settled on the following steps.

Prime with Leadbelcher. Games Workshop sells this in rattlecans, but if you don’t want to buy one, you can simply prime with a color of your choice and paint Leadbelcher on with a brush. 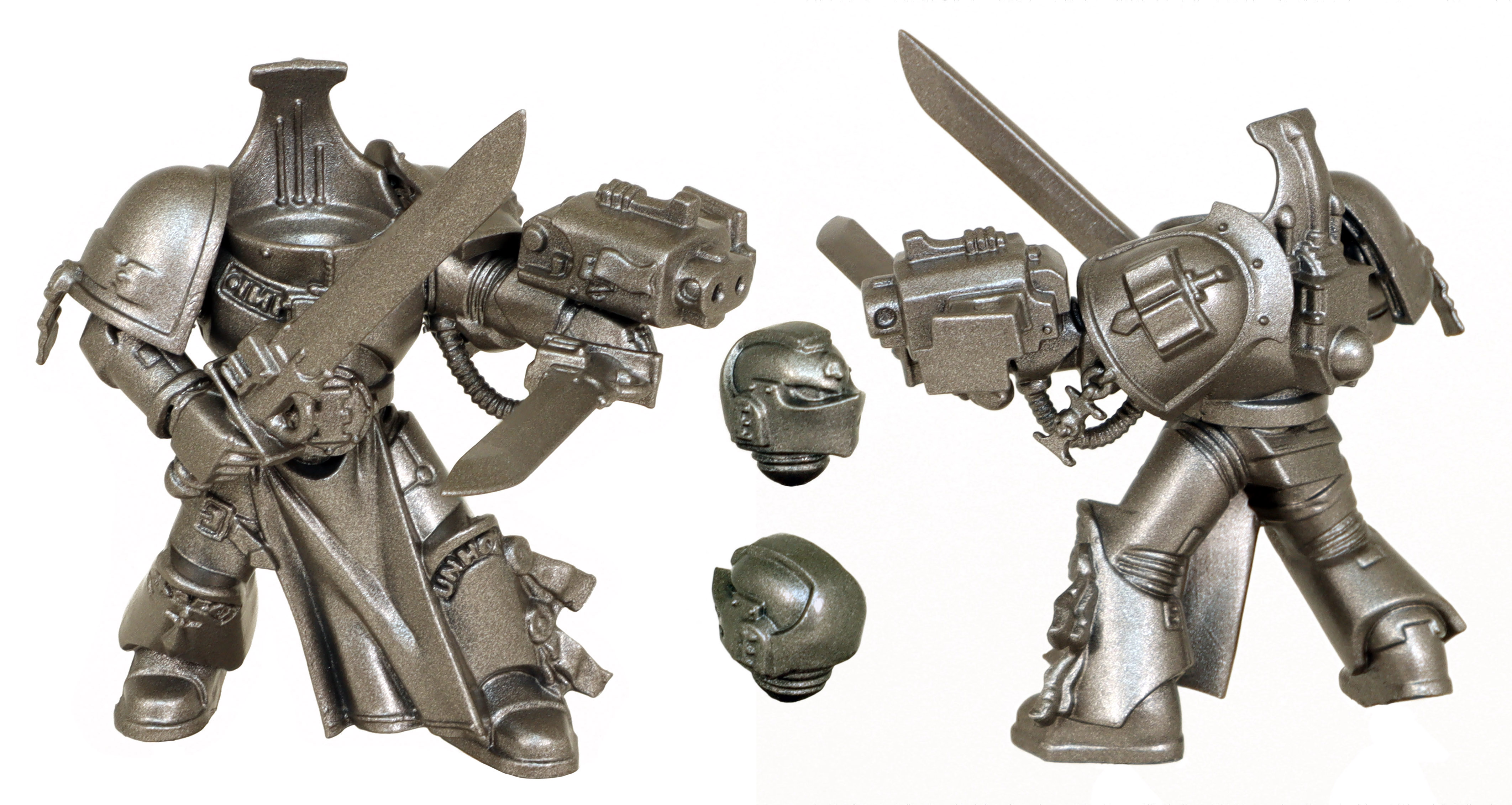 Paint with Grey Knights Steel. It just feels right using the namesake Grey Knight paint for this. I used the standard Grey Knight Steel base loaded into an airbrushI applied this with an airbrush (not the airbrush version of the paint), with a little bit of airbrush medium. However, if you don’t have access to an airbrush, you can brush it on with thin layers. I masked off some of the areas I wanted to remain lead-colored. 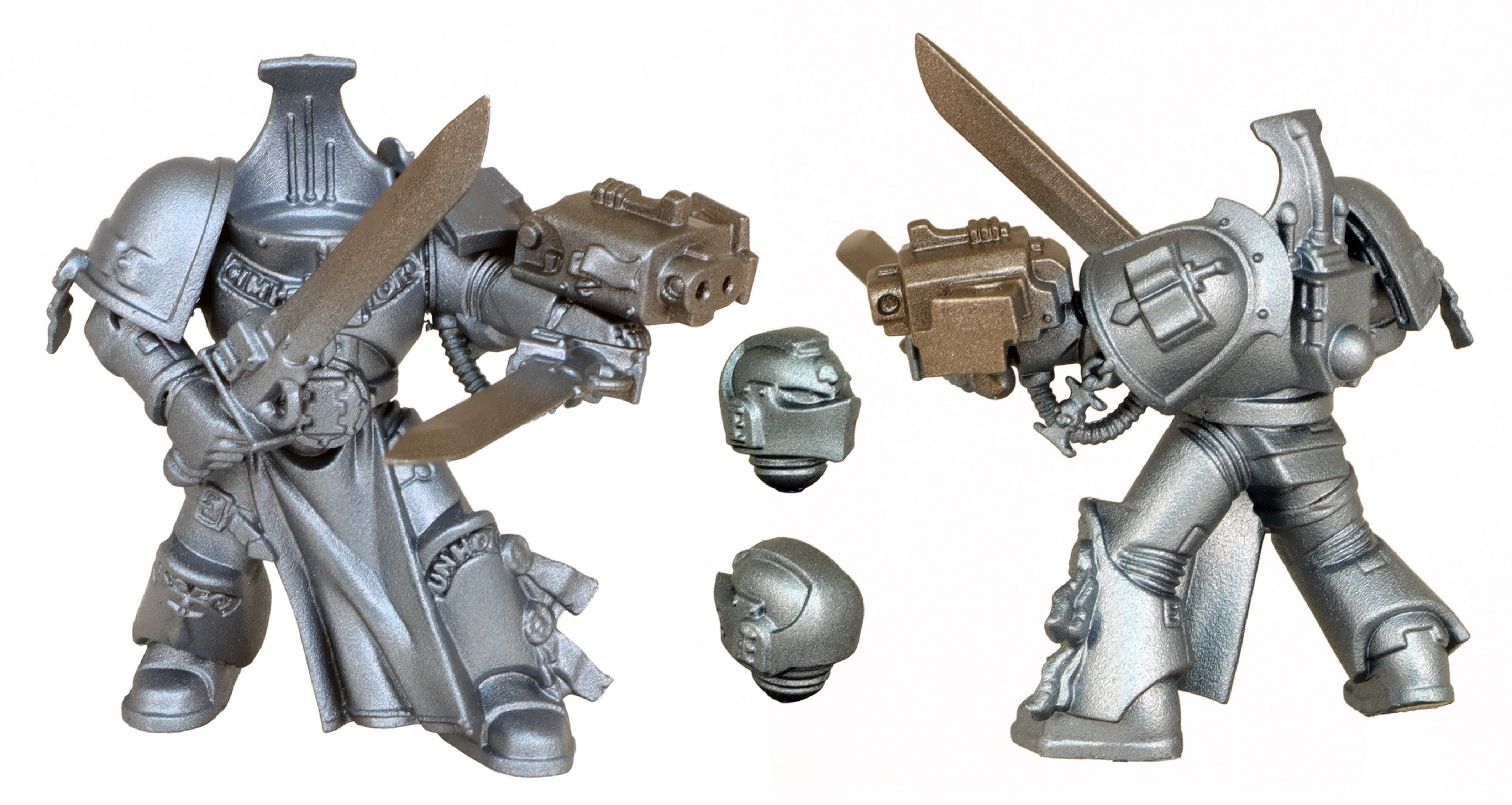 Wash with Drakenhof Nightshade.This creates the deep blue steel color we are looking for. 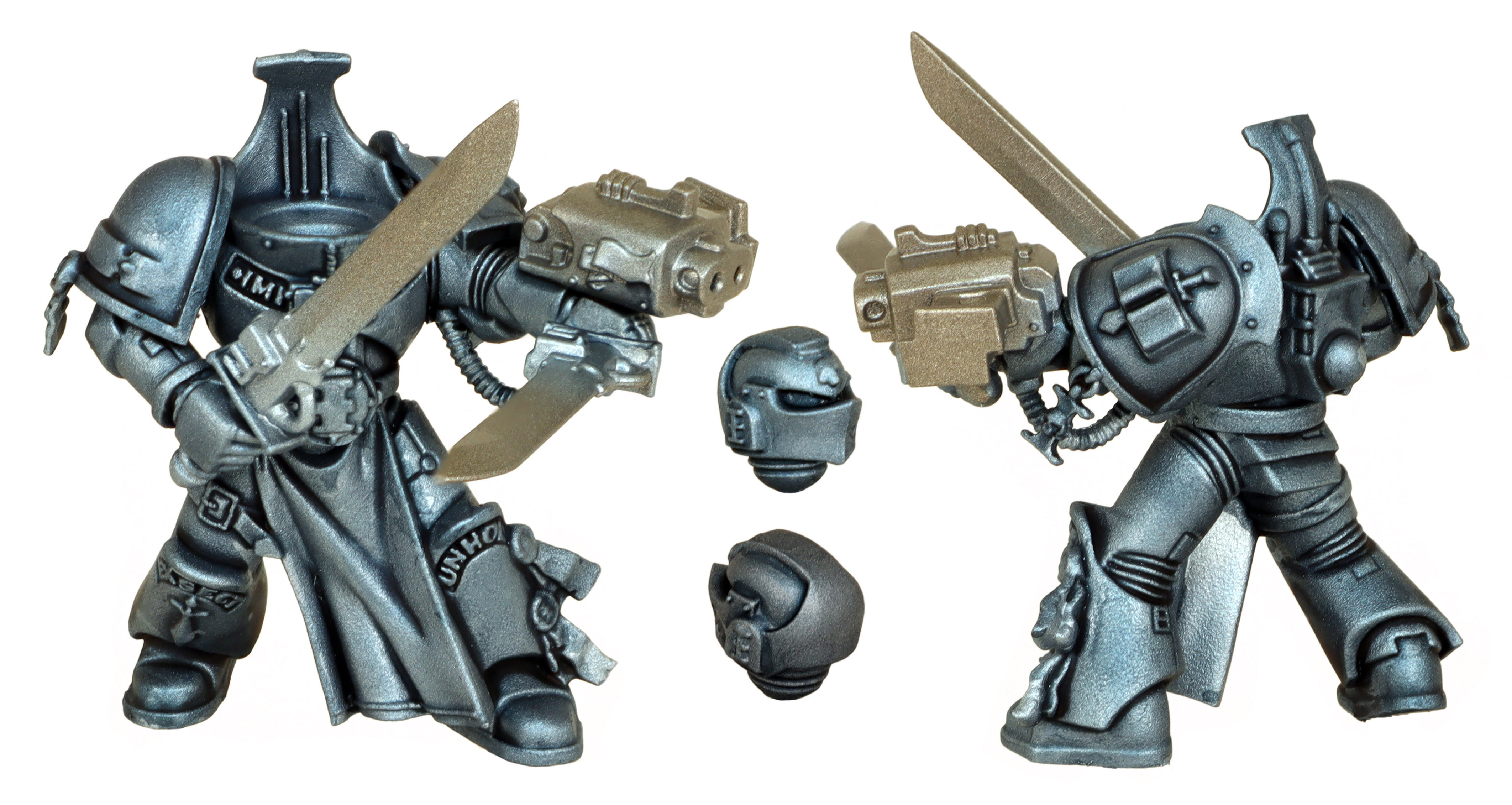 Paint details. There are a bunch going on in this step, so let’s break them down: 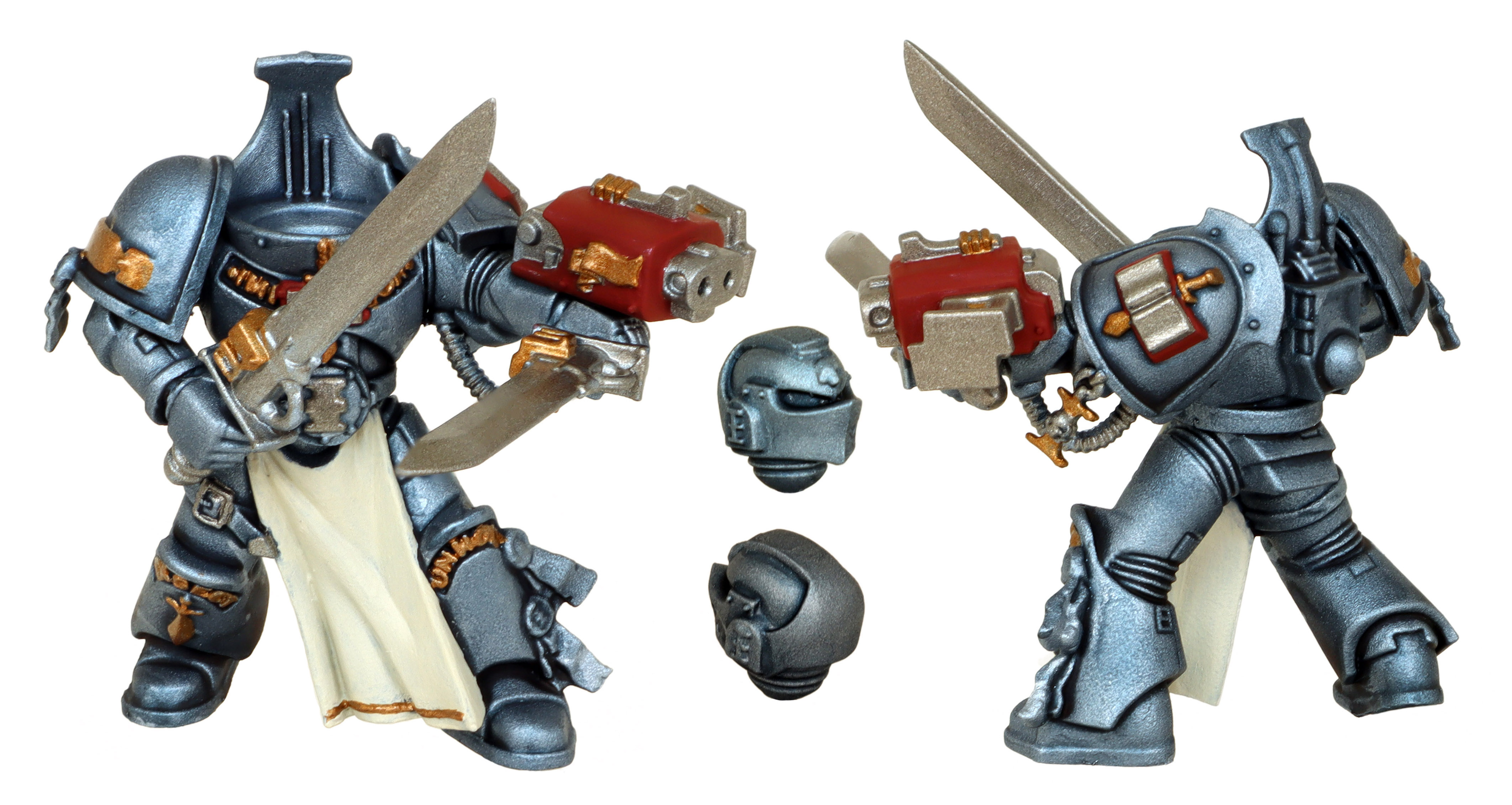 Wash everything in Nuln Oil. This will give everything a dirty, used look. Be careful not to let wash form pools on flatter areas, otherwise you’ll wind up with ugly coffee stains. I frequently have this happen to me, so do as I say, not as I do. 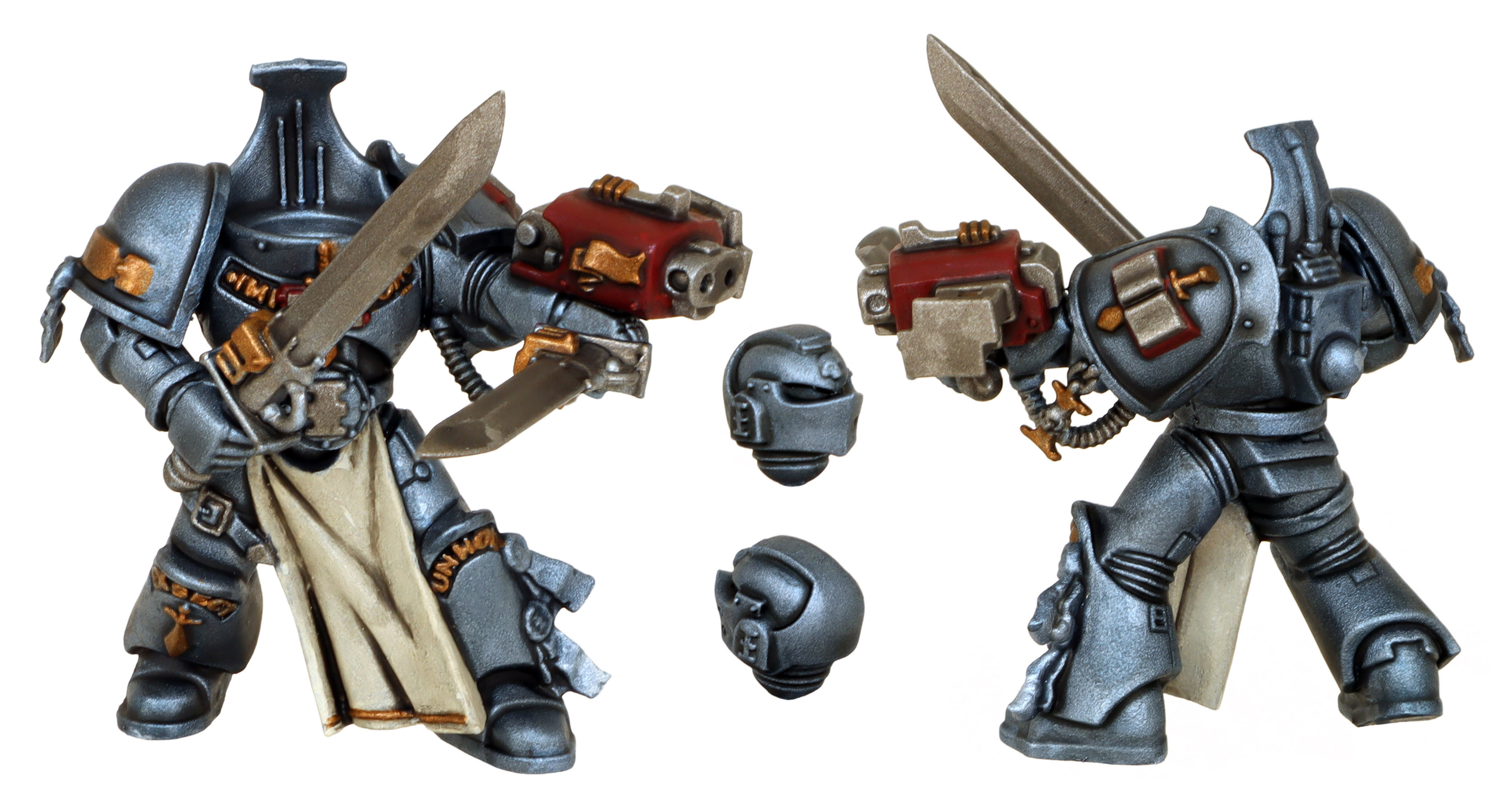 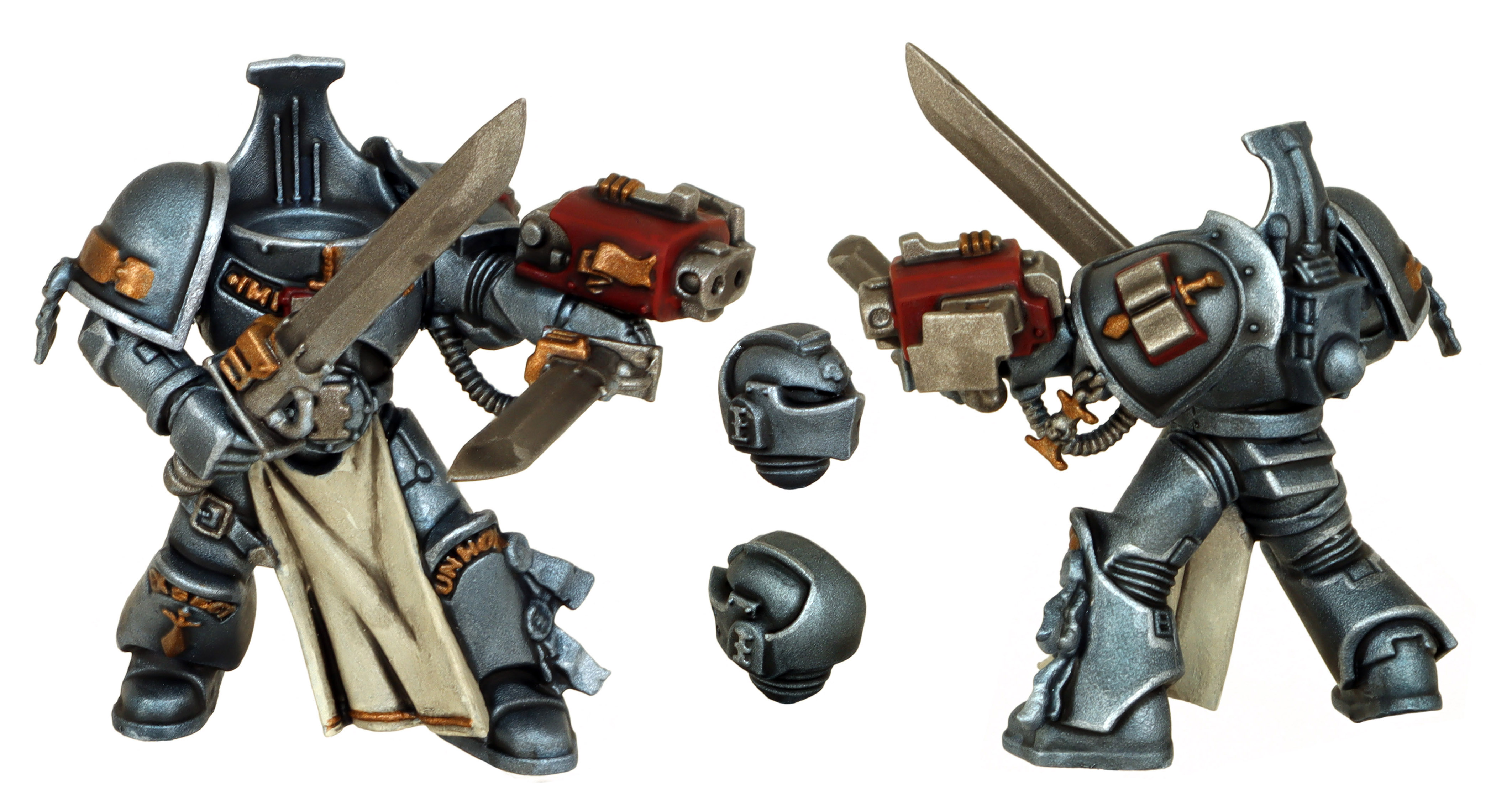 Final touches and assembly. There are loads of small details on here: 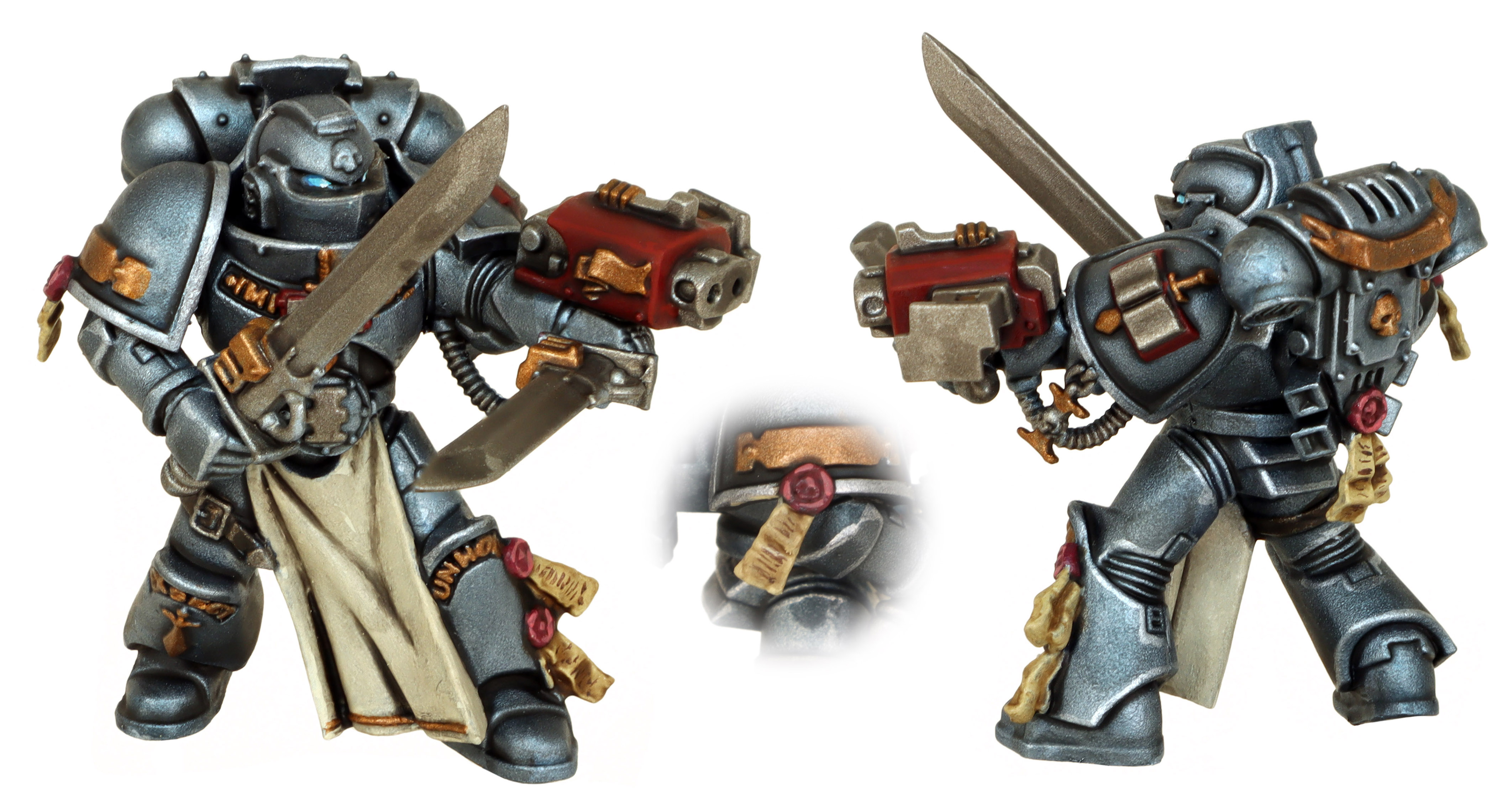 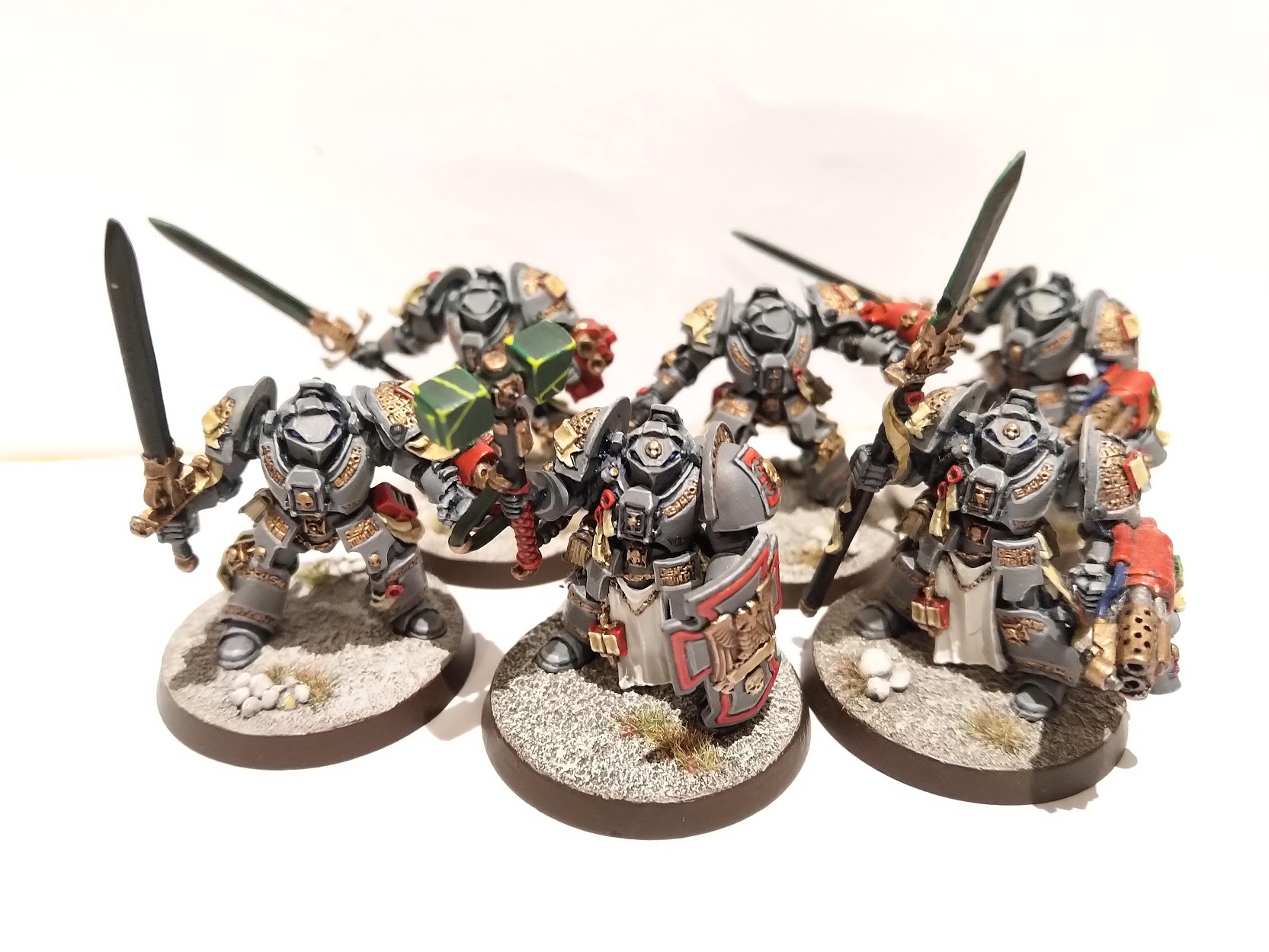 I have always sprayed black first, using Halfords matt black car primer. However, I’d be tempted to try a grey spray can nowadays, or run some Stylenrez grey through an airbrush.

I use Adeptus Battlegrey as my base colour, it has fantastic coverage and is a great colour to work up from. It can be bought from a 3rd party that makes GW Foundations colours. Current GW equivalent would be Mechanicus Standard grey, which can be bought as a spray can which would cut this step out entirely.

I used Asurman Blue on a lot of my GK as I painted them a long time ago. I now use Drakenhoff Nightshade which is quite a bit darker than Asurman was, but it’s still decent. I wash the entire model in this to try and get an even colour, although you can just wash the recesses if you want. This is to add the blueish tint that GK are known for.

I used to use Codex Grey for this step, but that’s since been replaced by Dawnstone which is very close in colour and is very good to work with. Original GK fluff had something about them having unpainted armour, and unpainted ceramite from a Forgeworld was codex grey, which is why I went the grey rather than silver route. I think this has since been retconned but I’m not sure. I make sure to leave some of the blue tinted base colour in all of the recesses while doing this step. 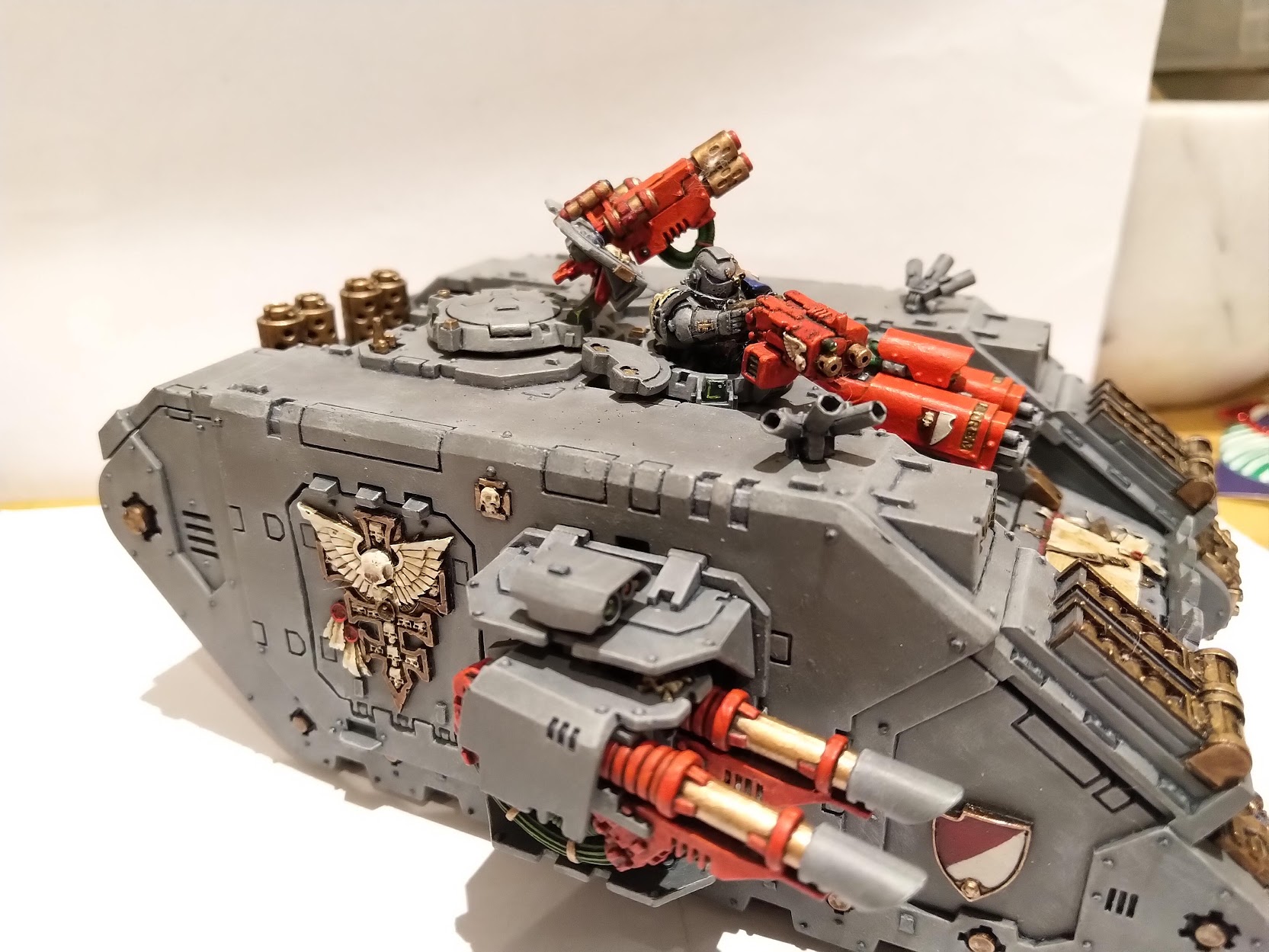 I still have a pot of Fortress Grey that I use for this step, but once that’s gone I’ll switch to Administratum Grey, as it’s almost identical. I edge highlight most things although I have a feeling the Land Raider might have been drybrushed. For a final highlight I simply add a touch of Reaper HD white to the grey to lighten it further, and only use it on corners or apex of curves.

I base coat these in Mephiston Red, wash with Agrax, re-layer with Mephiston, highlight with Trollslayer Orange, then wash the whole thing with Baal red. My Baal is just about to run out though, so I’ll be trying Carroburg Crimson for the wash although I fear it’s a considerably different colour. Perhaps a substantially thinned Blood Angels Red Contrast might work.

I don’t actually know what colour my metallic are done, as it was a pot I got from a store birthday way back that was a mis-formulated run and didn’t match the colour it was supposed to be. It also had no label on. I’d guess it was supposed to be Beaten Copper or Dwarf Bronze or similar. Current paint I’d suggest would be Hashut Copper. I then wash it Agrax, highlight it with the original colour again, and a final, sparing highlight of Runefang.

I base all my armies in the same way, with a neutral colour that works for most armies over some beach sand and small gravel that I collect and then oven dry before gluing to the base with PVA. I basecoat in Dheneb Stone, and I’m lucky to have a lot of it still in stock. As with Adeptus Battlegrey, there is a 3rd party company that sells a Dheneb copy, although I haven’t used them. I’d use Rakarth Flesh now as a current alternative. I then wash it with Agrax, then heavy drybrush with Dheneb, followed by a light drybrush with Vallejo Silver Grey, which despite its name is actually an off white and is an amazing paint. I then add various tufts of static grass, usually an autumnal colour as it pops really well against the neutral base. 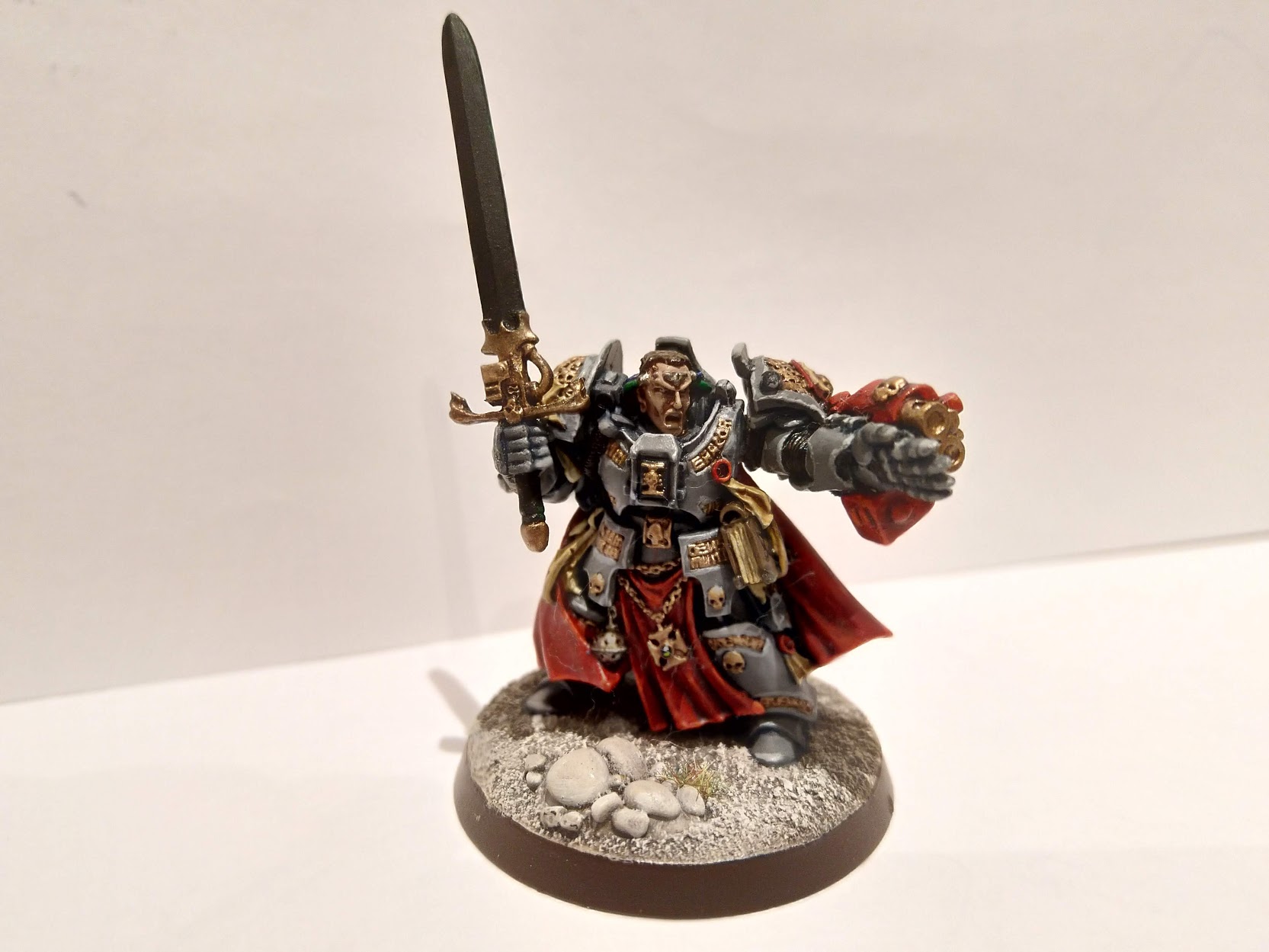 Grey Knights are a unique army with a very distinctive look. While their color scheme is relatively simple (grey or silver), their knightly theme gives you a lot of room to embellish with scrollwork, gold details, red and white heraldry, etc. As a very elite army, they also paint up very quickly given their low model count so getting a nice looking army on the table can be a relatively quick endeavor. As always, if you have any questions or feedback, feel free to drop a note in the comments below or shoot us an email at contact@goonhammer.com.