How to Paint Everything: Stormcast Eternals

In our How to Paint Everything series we look at how to paint well, everything, with multiple schemes and techniques. In today’s article we’re looking at the death mask-clad faces of the Age of Sigmar franchise, the Stormcast Eternals.

Created to Defend Azyr from the forces of Chaos (and annihilate Chaos completely), the Stormcast Eternals are made from the souls of great heroes, tested in intense trials and reforged into immortal warriors glad in golden armor. They tower over mortal men in stature and in battle wield weapons wreathed in living lightning. Each suit of armor worn by a Stormcast Eternal is made from the enchanted remains of the world-that-was. When they die, they’re reborn and sent back out to fulfil their purpose (though they lose a piece of themselves each time this happens).

On the battlefield, Stormcast Eternals strike like lightning, and fight like heroes of legend from old myths and songs. As beings literally made for battle, they fight with precision and ferocity in a variety of roles with a variety of armaments. When not on the battlefield, the Stormcast Eternals reside in the Stormkeeps, massive fortresses that defend Sigmar’s most important territories and holdings.

As the face/hero faction of Age of Sigmar, there’s no shortage of fiction and content about the Stormcast Eternals. While I personally haven’t read these, I’ve heard very good things about Josh Reynolds’ work in Age of Sigmar, and I’ve loved his work on the Fabius Bile books. Plague Garden and Soul Wars, both by Reynolds, detail the struggles of the Stormcast Eternals against the forces of Nurgle and the Nighthaunts, respectively. The Realmgate Wars series also offer up a number of stories from various authors that touch on the Stormcast Eternals and their conflicts with the various forces of Destruction, Death, and Chaos.

We’ve covered Stormcast Eternals on a couple of occasions. If you’re interested in getting started with faction, you can find that here and if you want to take a deeper dive into how to play the faction, check out Start Competing: Stormcast Eternals.

I hope you like painting metallics, because there’s going to be a lot of that with Stormcast Eternals.  The good news is there’s also a lot of freedom in how you paint them, but you’ll want to make scheme decisions that take into account the fact that they’re primarily metallic. 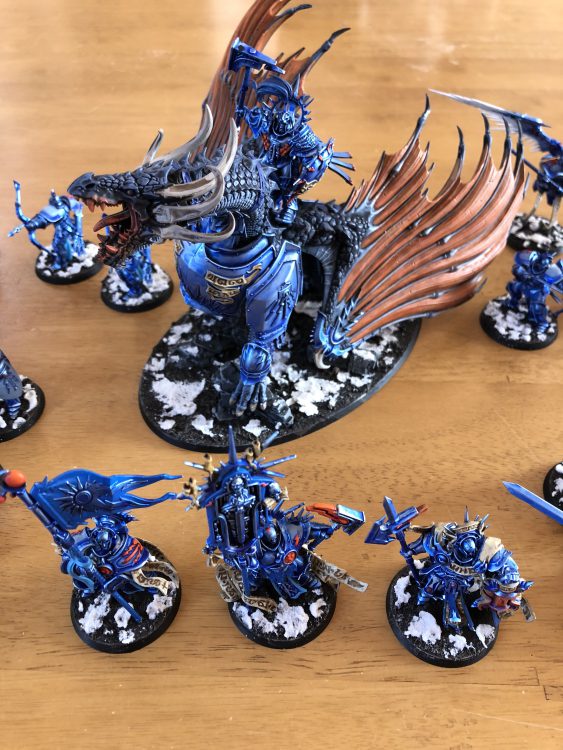 Stormcast were one of my first AoS armies and I was looking for something quick to get on the table but effective. I wanted to go for a cold, icy theme with orange accents. After a lot of research I discovered the joys of Vallejo Liquid Metal. Not to be confused with Vallejo Metal Colour, this stuff is actual metal in an alcohol medium (like Goldschlager).

This stuff is amazing, it shines like actual metal, because it actually is metal. However, there’s some things you need to know about using it. Firstly, it’s metal and metal rusts. If you use water to dilute this, or clean your brushes your models and paint will rust, and not in a cool weathering way. So you have to use alcohol to thin and clean your brushes. I used very high proof Isopropyl. Secondly, if you start using your nice sable brushes you will destroy them, you want to use synthetic brushes otherwise they’ll end up in the bin.

Right, now that’s over – I coated the models in liquid silver. This is crazily bright and shiney and looks pretty awesome, it is also ridiculously messy! 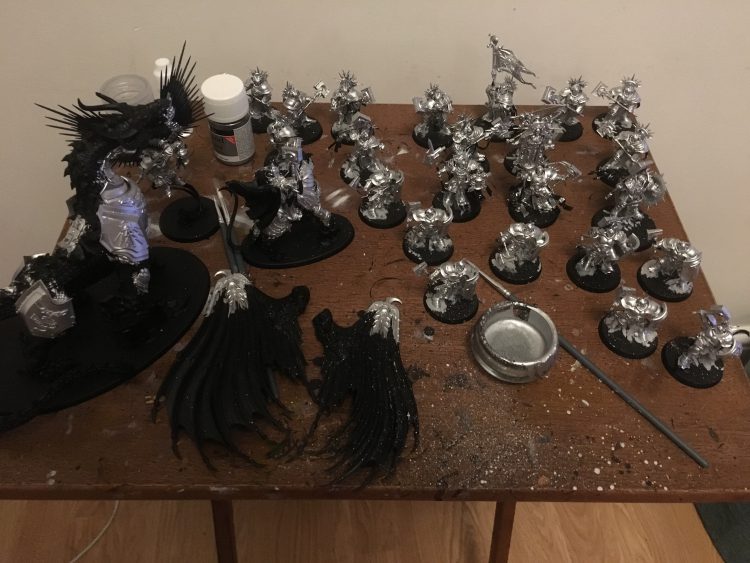 Afterwards I wanted to tint the metal blue. I used Guilliman Blue glaze (now discontiuned) but I reckon a thinned down coat of Contrast paint would do the same trick. After a couple of nice coats I gave the model a recess shade with Drakenhof Nightshade. I then covered the shoulder pads and shields in Fenrisian Grey and picked out the orange pieces with a simple coat of Trollslayer Orange. 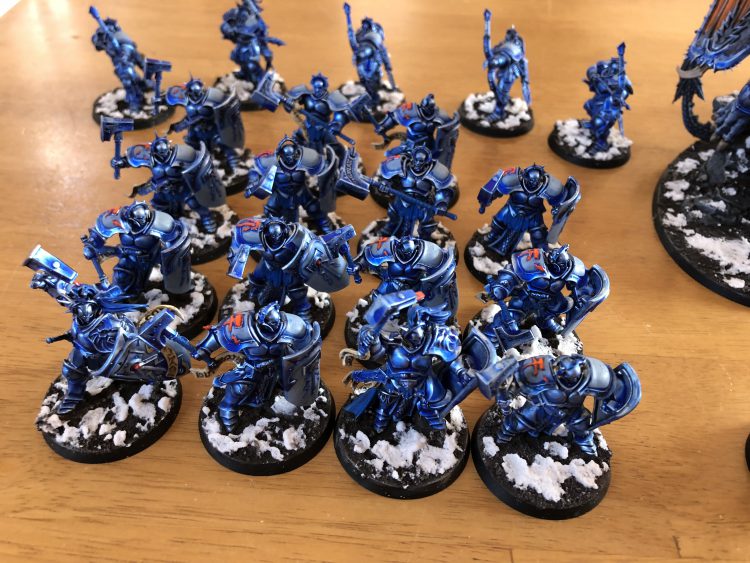 For some of the more detailed models I gave them some OSL by drybrushing red then orange on the light sources as well as filling in the parchment with a simple coat of Rakarth Flesh and Agrax. It’s a really simple paintscheme – it won’t win any awards but for the speed it takes I think you can get some pretty decent results. 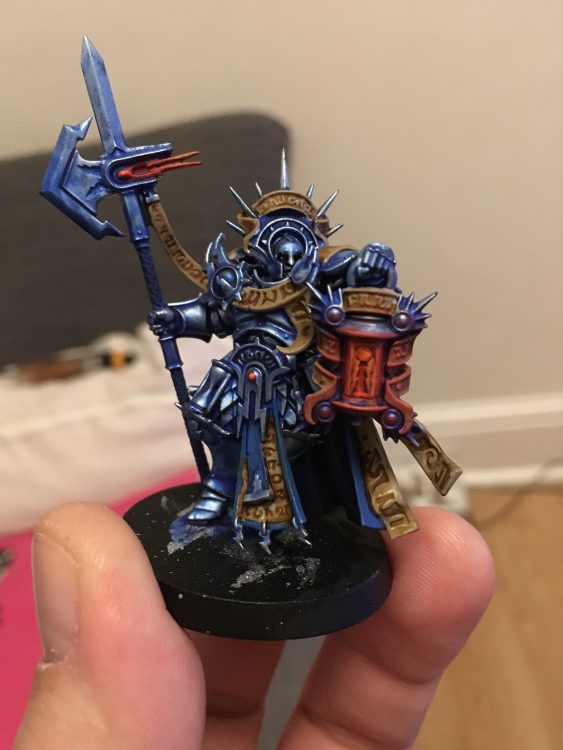 The method I used for painting gold on these guys was similar to the method used in the HTPE Custodes article.

I painted this sequitor in the Celestial Warbringer scheme.

The whole model was primed with Stynylrez Ebon Flesh. Her armor is painted fairly close to the the painting guide in the Stormcast Eternals Battletome, starting with a base coat of Screamer Pink. The cloth and tabard are based with Ushabti Bone, and the robes with Incubi Darkness. The white parts of shield and pauldrons are Vallejo Dead White. 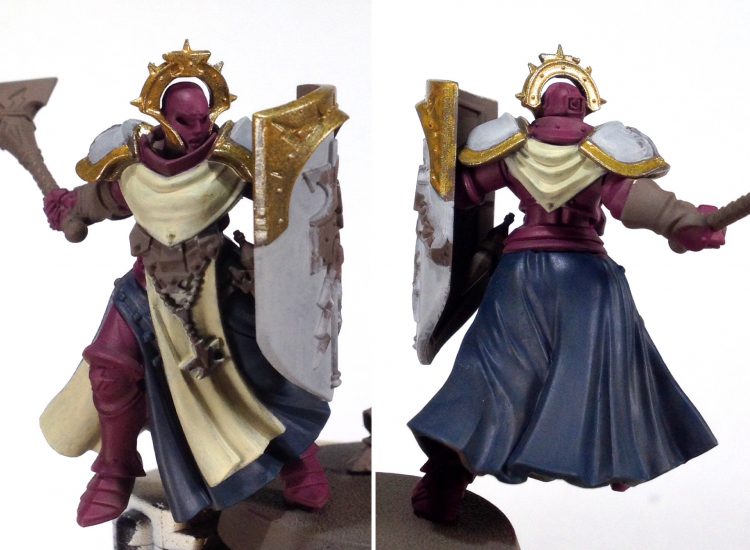 The next step for the armor was a recess wash with Druchii Violet. 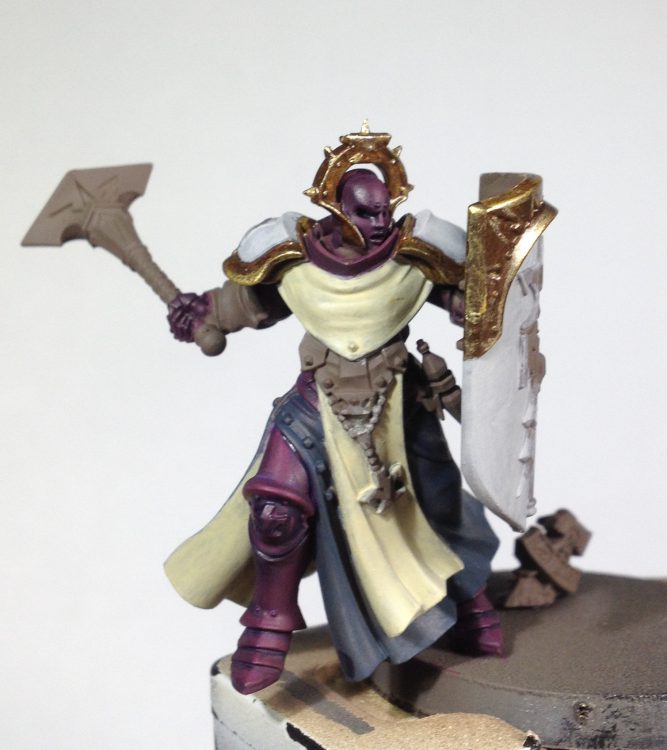 The next image shows the first highlight of Pink Horror, and the second finer edge highlight of Emperor’s Children. 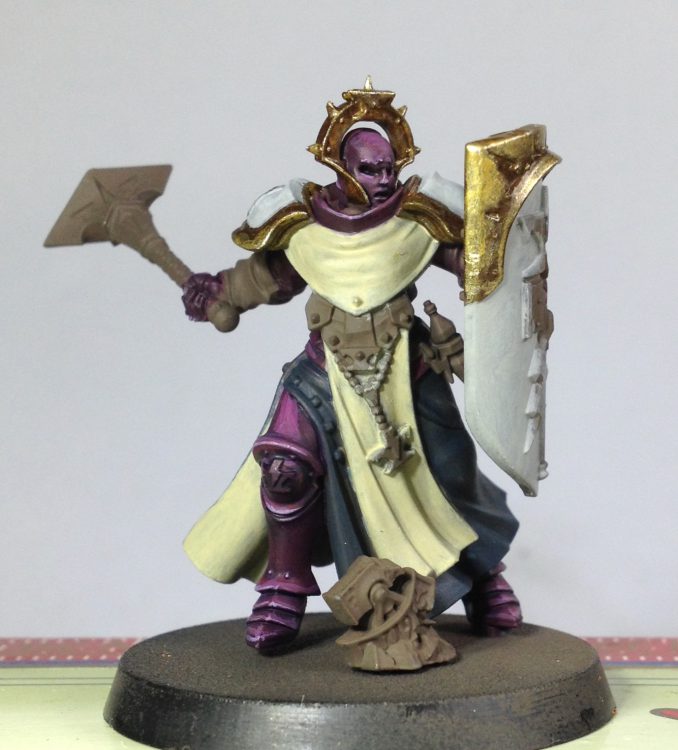 The front cloth and tabard are highlighted with Screaming Skull. Some Ushabti bone mixed with a little bit of brown is put in the recesses. Brown mixed with pale yellow is used to highlight the leather parts. 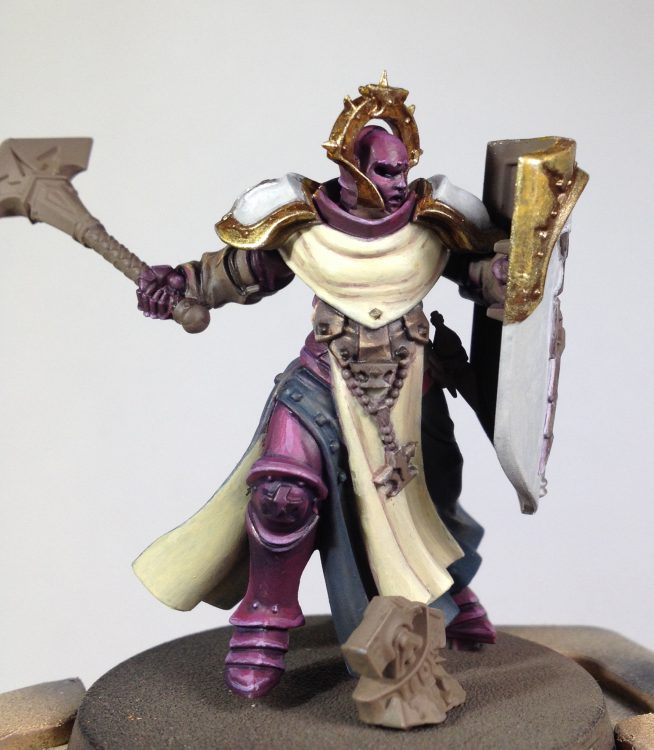 The robes are highlight with a mix of Sotek Green and Vallejo Game Color Ultramarine Blue. The mix was applied in thin layers with brushstrokes going from top to bottom, with the color being built up more on the edges and ridges. Here you can see that I kept making sort of random lines from the edges of the shield toward the center of it. Due to the thin nature of the white the lines slowly build up making an interesting effect. 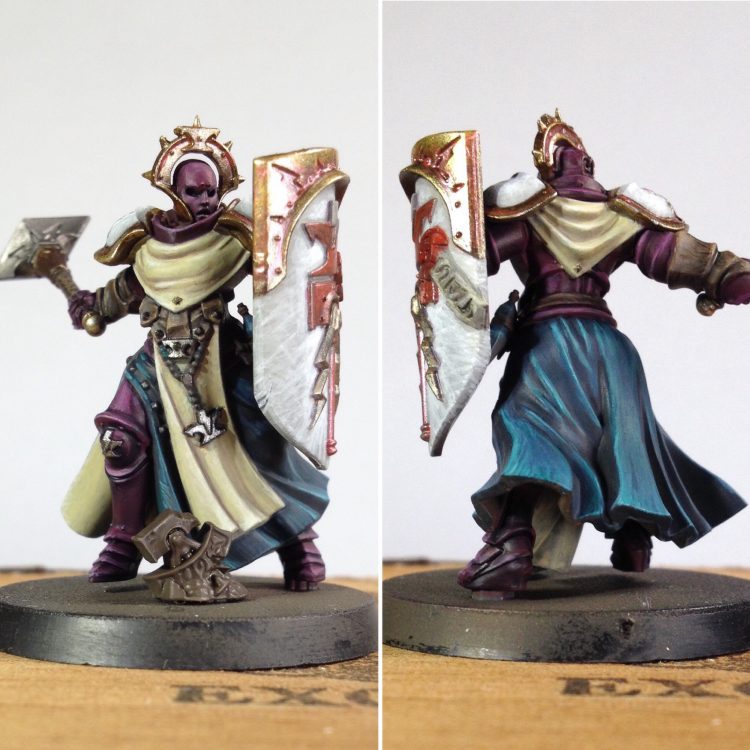 My Stormcast follow a very simple scheme to get tabletop standard miniatures turned out fairly quickly. It’s the gold and blue scheme frequently seen on Stormcast, and is easy to replicate and paint across squads, warbands, etc of Stormcast minis.

I did a video on the scheme when AoS 2nd edition first released, and it goes through my method in detail.

For me the basic steps for painting Stormcast are:

There are specific chambers and schemes to use to paint your forces, but no one cares about Stormcast chambers in the way people care about space marine chapters. Similarly there are all sorts of specific schemes for the Orruks in AoS, but there is a lot of Iron Warriors but Orks, Raven Guard but Stormcast, going on. This probably isn’t just lazily repurposing marine chapter schemes for AoS but because there are so many marine chapter schemes that coming up with new schemes runs into the Simpsons problem.

Gold is very popular, so go with a gold recipe that you like the look of because you’ll be painting a lot of it.

I am painting to a tabletop standard (I did the gold on all the minis in the Soul Wars box in a single painting session using the Balthasar Gold recipe) in order to turn things out quickly. For fancy schemes you’ll be going to someone else.

Beanith: Let’s see if I can finally understand this. You’re telling me that with the recent launch of Warhammer Mortal Realms in the Land Downunder where I end up with a hundred Chainrasps for whom I have grand plans for, I didn’t actually end up with a bunch of Primaris Veterans in bathrobes to shove deep into my Cairn of Opportunities waiting for the day I accidently start a Dark Angel army and I find myself needing a bunch of Primaris Veterans in bathrobes to tag along with my beloved biker/land speeder army which I will totally one day paint and it will be awesome and Greg and I will be the best of frie… ahem.

Editor: This the gist of it yes, those are the Easy to Build Sequitors

Beanith: I don’t know, I mean this guy looks ready to smack a Necron Overlord in the chops?

Editor: Well technically yes but I’m still going to need to see some photos of Spiderman. He’s a menace, you know.

Beanith: This is going to be one of those things where I try out new things and grow as a painter isn’t it?

Right, so with a new project, I decided to mix it up and try some with a Metallic undercoat and some with Grey Seer Undercoat. After that, I experimented with Contrast Iyanden Yellow versus Taimiya Gold Leaf and Retributor Gold to see what I liked best.

After settling on the Retributor Gold, I decided to smoosh it on all the armour pieces with a brush because I wanted too… it has nothing at all to do with the fact that the Retributor Gold Spray is an eye watering $50 dollarydoos. Plus Rob said I couldn’t just spray and then dunk them in Nuln oil and call it done. Spoilsport

After that, it was Stormhost Silver and Contrast Flesh Tearers Red on the weapon, Contrast Ultramarines Blue & Contrast Apothecary White on the robes. I also broke out my favorite new paint, Tesseract Glow, and added it to the recesses on the weapon and crystal. Here I practically flooded the indents on the weapon and once it dried I ended up with this lovely effect.

Here it was time to crack on with the base, I started off with Contrast Basilicanum Grey for the stone, a mixture of Contrast Guilliman Flesh and Contrast Wyldwood for the dirt, Contrast Gryph-Hound Orange for the pot, Contrast Skeleton Horde for the skull and Contrast Plaguebearer Flesh for the leaves.

Boosh, done son. I might go back and go over the armour recesses with Iyanden Yellow at some point but I really like the bright gold and didn’t want to dull it down with a Wash. Shine on my newly forged son, Shine on.

Go forth and defend the mortal realms

That wraps up our look at Sigmar’s elite warriors. There’s a lot to them and hopefully this has given you appropriate inspiration on some additional ways to paint them. If you’re interested in other techniques and methods for painting, check out our How to Paint Everything home page. And if you have any questions or feedback or want to show off Stormcast Eternals of your own, drop us a note in the comments below or email us at contact@goonhammer.com.