Hello again, readers! You may remember my article series on running campaigns in 40k. You may also remember that I’ve only posted 2 articles in the series, short of my original promises. Well, I’m back with a new article that I hope will both serve as another useful entry in the series and also explain why I haven’t been posting as often as I originally intended to. It’ll also set up the next few posts in the series.

So without further ado, I’d like to introduce all of you to… The Astradus Campaign!

The Astradus Campaign is my big follow-up to the campaign I ran in 2017/2018, the Paulus campaign. The Paulus campaign originally started as three friends and I playing a linear Planetary Onslaught campaign before ballooning to a larger campaign including our entire playgroup and 10 players across 2 states. We ended the campaign with a big narrative game of Apocalypse that was a total blast, and incorporated a couple of players who weren’t regulars in the campaign.Overall, the campaign ran for about a year and a half and was a total blast, and by the time it ended, I was already having conversations with people about how to run the next one.

In this article and the ones following it, I’ll cover the set-up and mechanics for the Astradus Campaign, and go over how I’m running it. As the campaign happens, I’ll post regular updates on goonhammer as well.

Shortly after the first campaign ended back in October 2018, I started talking to forums regular and hobby superstar BuffaloChicken about the campaign and what we wanted to do for the next one. He had a few ideas about what he wanted out of the next campaign, and I had a few things I wanted to incorporate. BC’s requests were pretty straightforward: He wanted to do a slow-grow campaign this time around, to encourage our newer players to build and paint more models as the campaign armies increased in size, and because he likes playing smaller games. Also, he wanted to incorporate some kind of cards for territories, like the ones in the Necromunda deck. 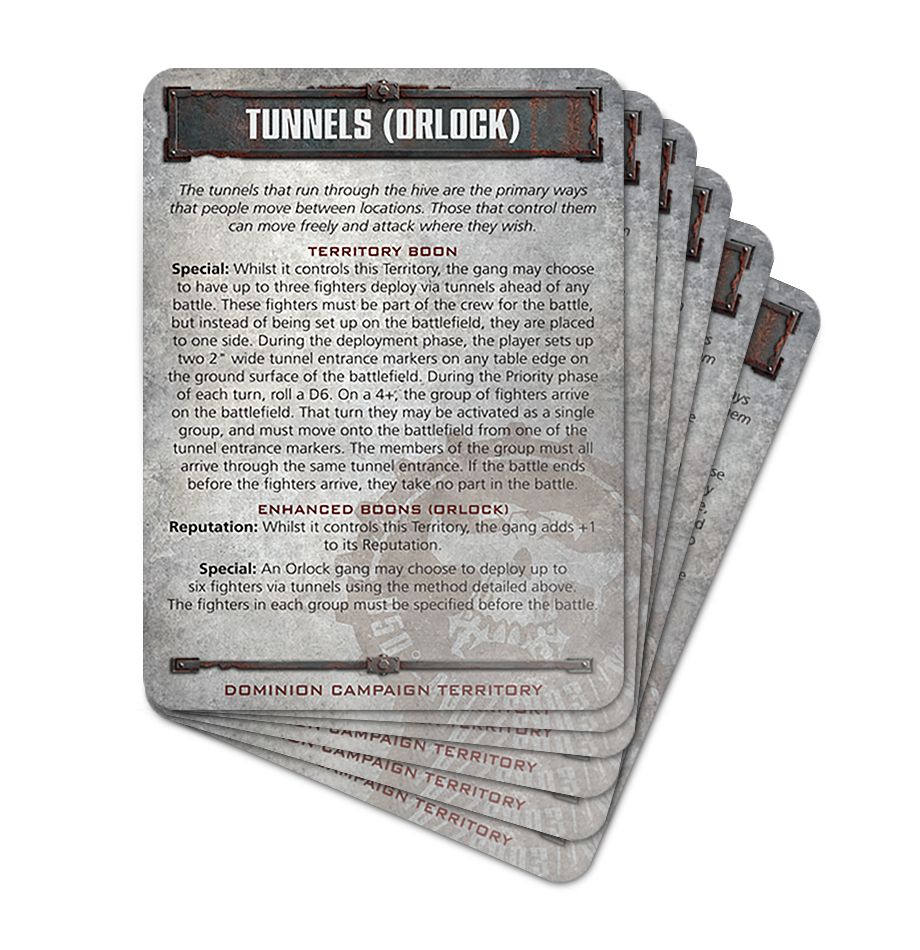 These were both pretty easy asks for me. Slow-grow can be a bit of a pain for more established players, but helps give the narrative a more real sense of escalation throughout a campaign. The cards were also something I had been wanting to do for a long time as well — I love printed materials, and I’ve wanted to have physical cards tied to campaign assets for a while. Also I was itching to try out some of the custom printing services I’d seen online.

As far as what I wanted to do this time around, the big things were:

Ok, there’s a lot to get through here, so let’s start with the players and the cards mechanic, and then I’ll come back to the other ones in future installments. Just a head’s up–my players read this, so I can’t give away too many secrets.

Running a campaign like this takes a lot of GM involvement. In order to include players in the MD/DC/VA area, I’d need to mail assets to players and have a way for everyone to stay in touch. This was super important as neither of my player groups really has a central game store or club to play at; games tend to happen at players’ houses, or at a number of stores in Southern Maryland. I set up a private Discord server for the campaign and invited all the players in order to have a single, non-Facebook place for announcements, campaign chat, and meet-up discussion. As an added bonus, Discord also let me incorporate a dice roller bot so I could do public rolls for things like Warlord injuries if I needed. In order to get some extra organizing help, I tapped Kevin to act as a kind of “lieutenant GM” down in the MD area. Basically, he agreed to help distribute campaign assets as needed.

I’ll get more into the story behind Astradus later, but for now I’ll say that the core solution to including two disparate groups was essentially to just have the story be that the two groups are fighting over different planets in the same system. That gives plenty of reason for crossover games, and also lets me re-use unique assets for each planet.

Alright, so I wanted a card system to act as the backbone of the campaign. That meant a few things: 1, I’d have to create physical cards for players to hold on to, which would mean distributing those cards. 2. I’d need to figure out what the cards would represent during the campaign.

The obvious answer to 2 was to have them represent specific locations or territories, similar to Necromunda. Unlike Necromunda, I wanted these to be quite a bit simpler and have smaller effects. I also wanted them to represent more than just locations, and allow for other cool shit in the campaign. Eventually, I settled on creating cards for the following:

After tooling around with the cards in the above four categories, I eventually realized that I wanted to create cards that could represent player bases as well. Because these were semi-universal, I ended up choosing to tie them to the slow-grow portion of the game, making it so players would receive new base cards as the campaign progressed, each one allowing them to field larger armies. These also serve as a kind of reminder card: 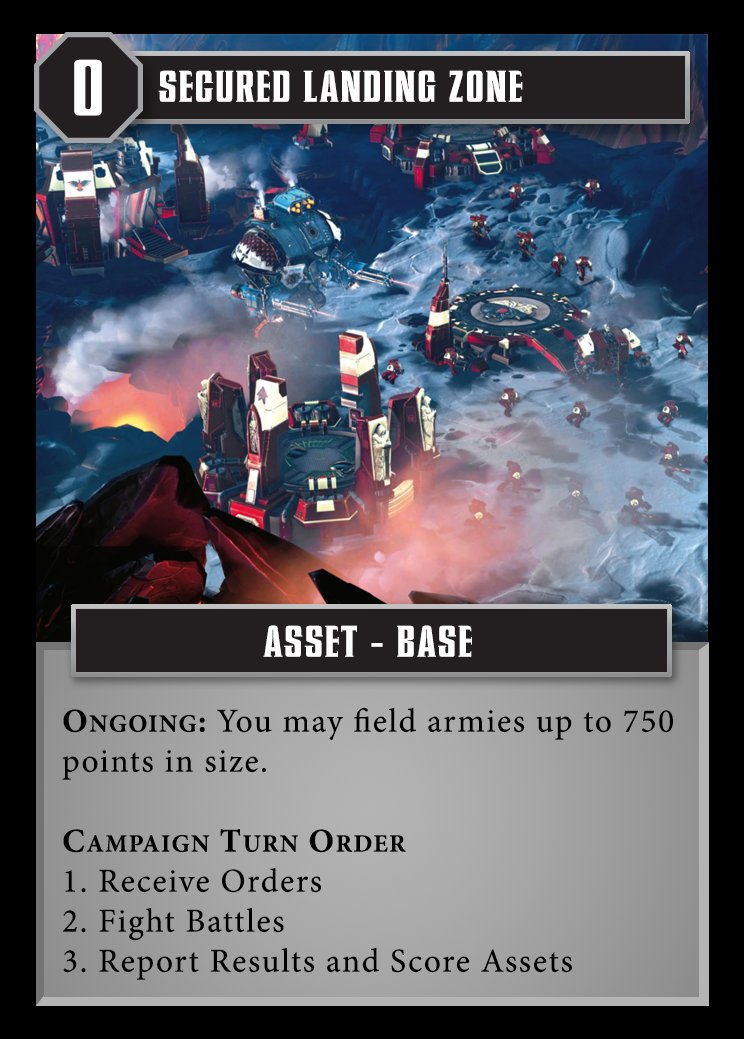 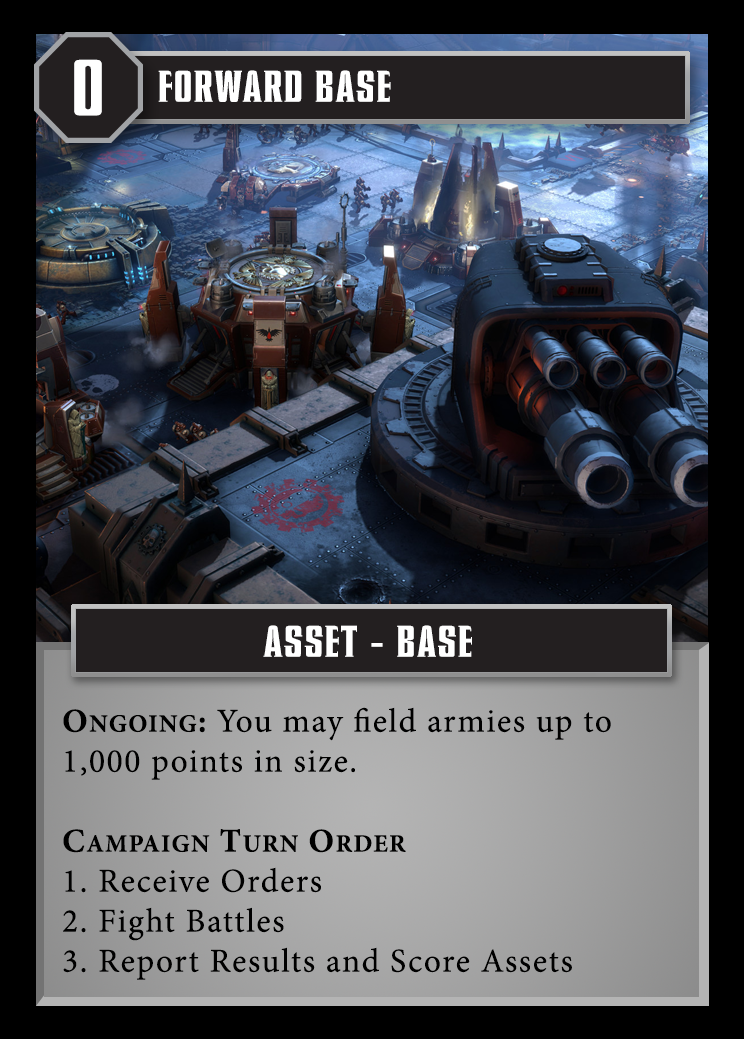 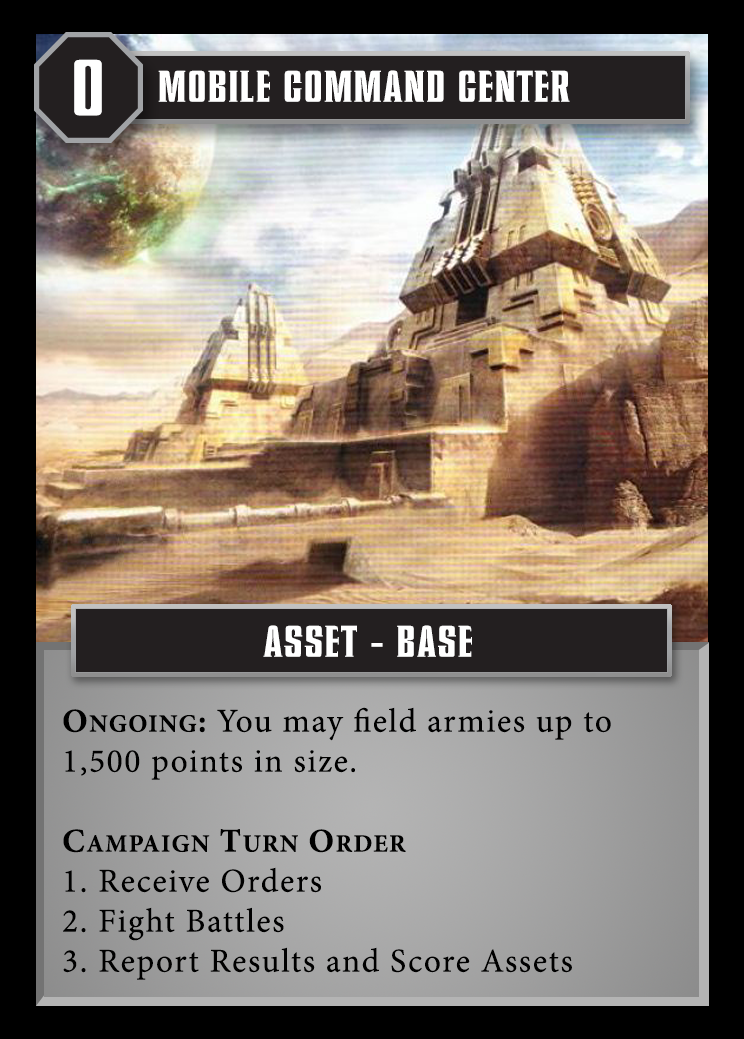 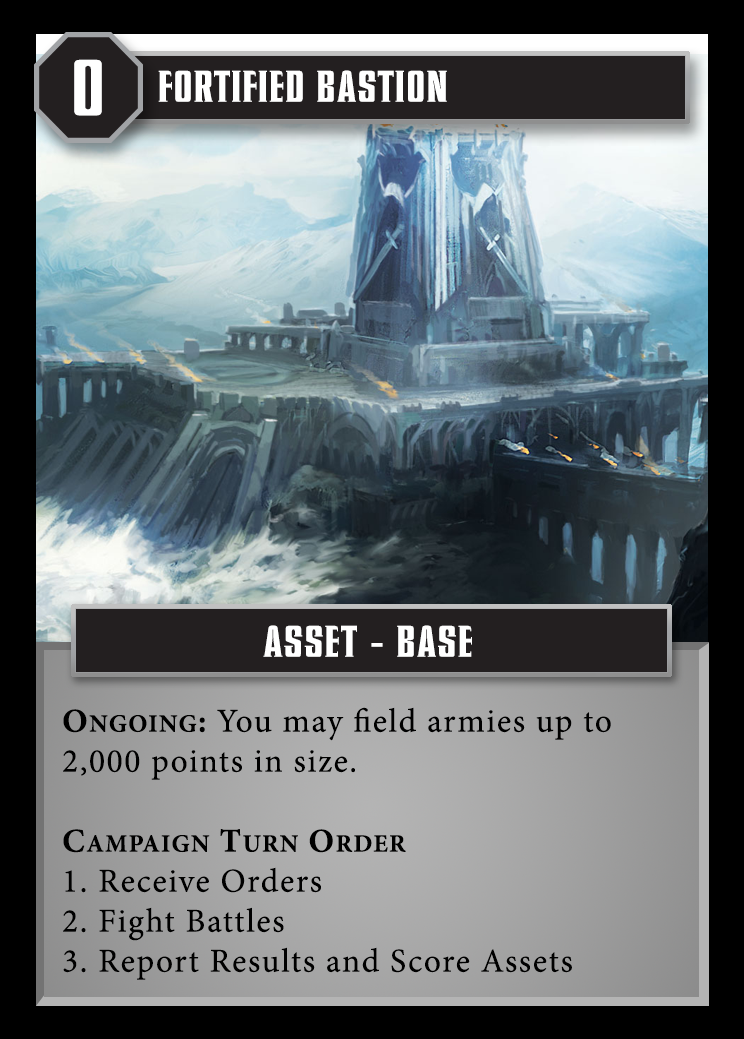 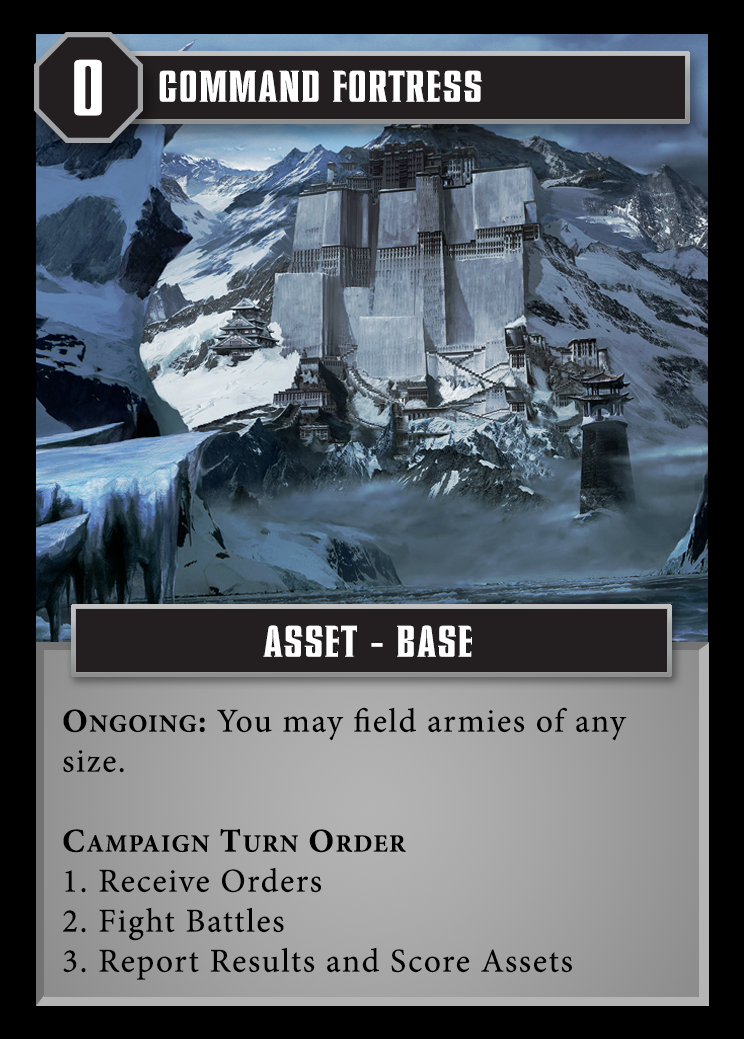 Also I should note at this point that I’m a professional illustrator and designer and desktop publishing is a major hobby of mine. I created the cards in Photoshop and most of the art I’ve pulled for them comes from a mix of official art, Dawn of War concept art, and art from the Conquest card game.

I also created a trio of cards to do the same thing for Kill Team, which would alert players to when they could start running bigger Kill Teams incorporating expansion content. Rather than call these bases, I labeled them as Stakes. 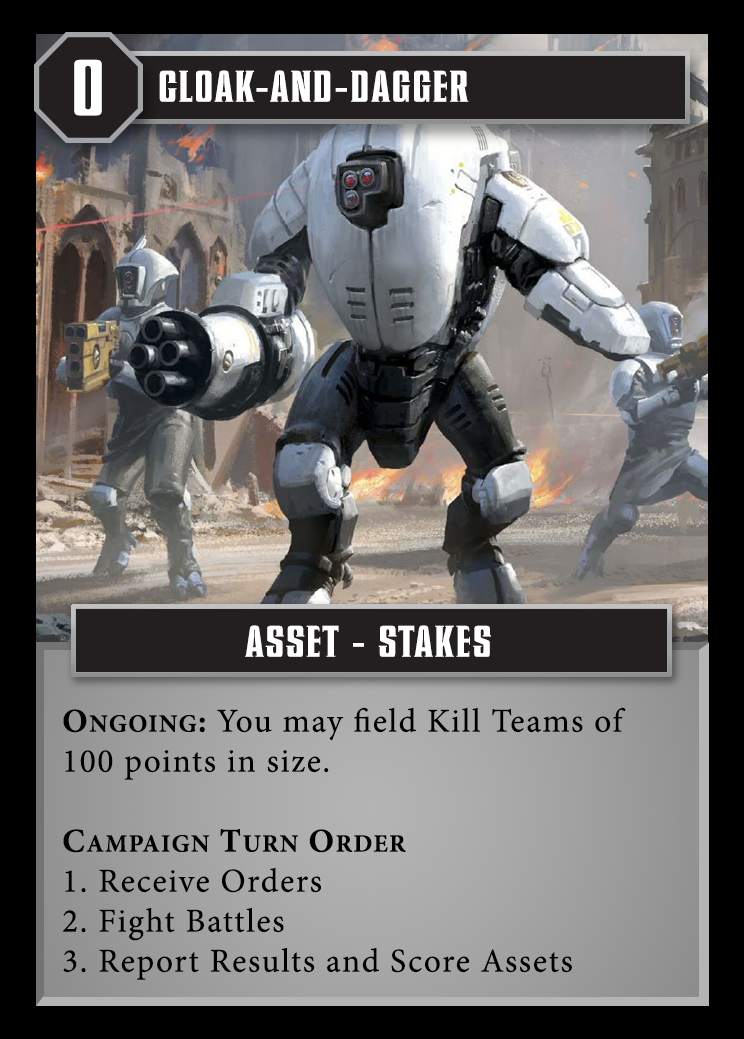 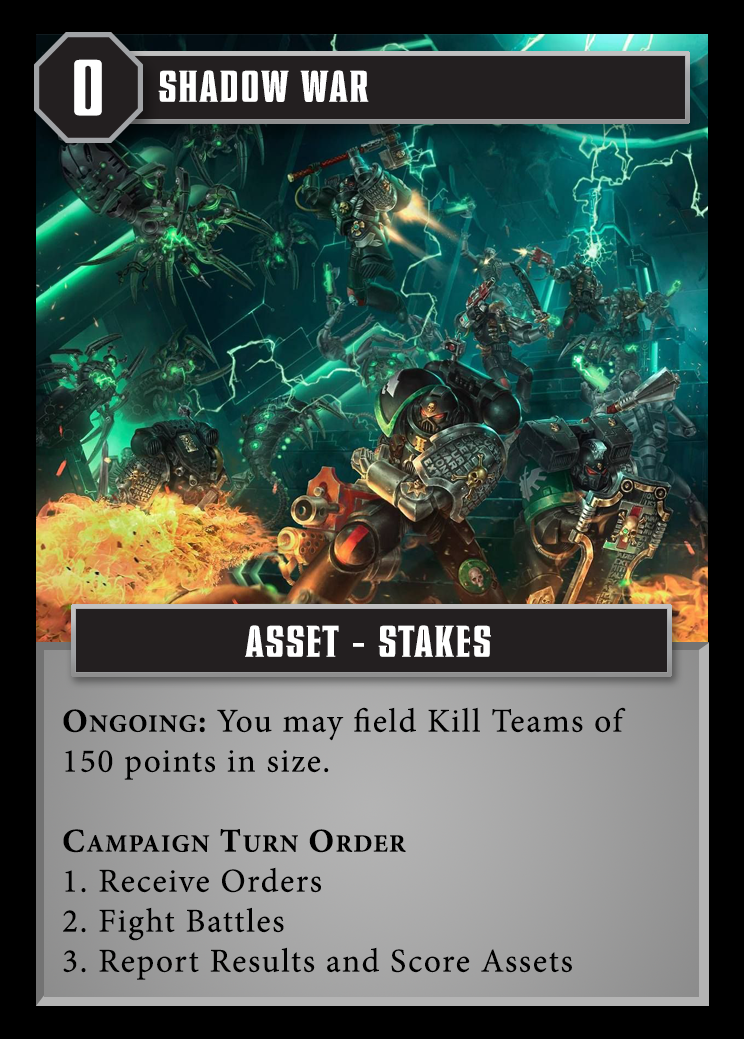 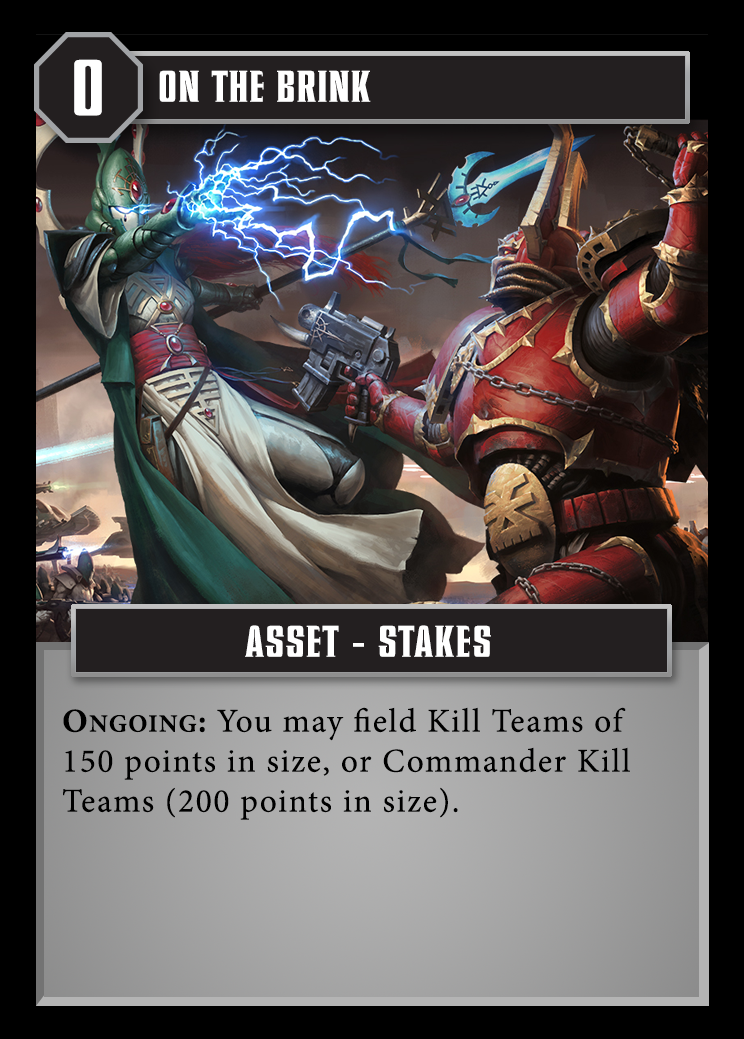 Ok, so let’s talk about the other cards. The core Assets of the campaign are Locations, which players are primarily fighting over in their main missions. The more location cards a player has, the more territory they’ve captured, and the more points they’re scoring. I knew I wanted locations to be worth varying amounts of points, and also that some of them should have cool special effects. These had to be minor, so that a player who had won several games wouldn’t suddenly outclass someone who had been on a losing streak. Also, I knew that I wanted to limit them to one-per-game in terms of use, so that players would have to choose which locations to activate. I went back and forth on whether the locations used should govern where the battle is fought, but ultimately shied away from that as I wasn’t sure players would always have the resources to create battlefields representing specific locations or landmarks.

Many locations are inert, just giving a Victory Point bonus: 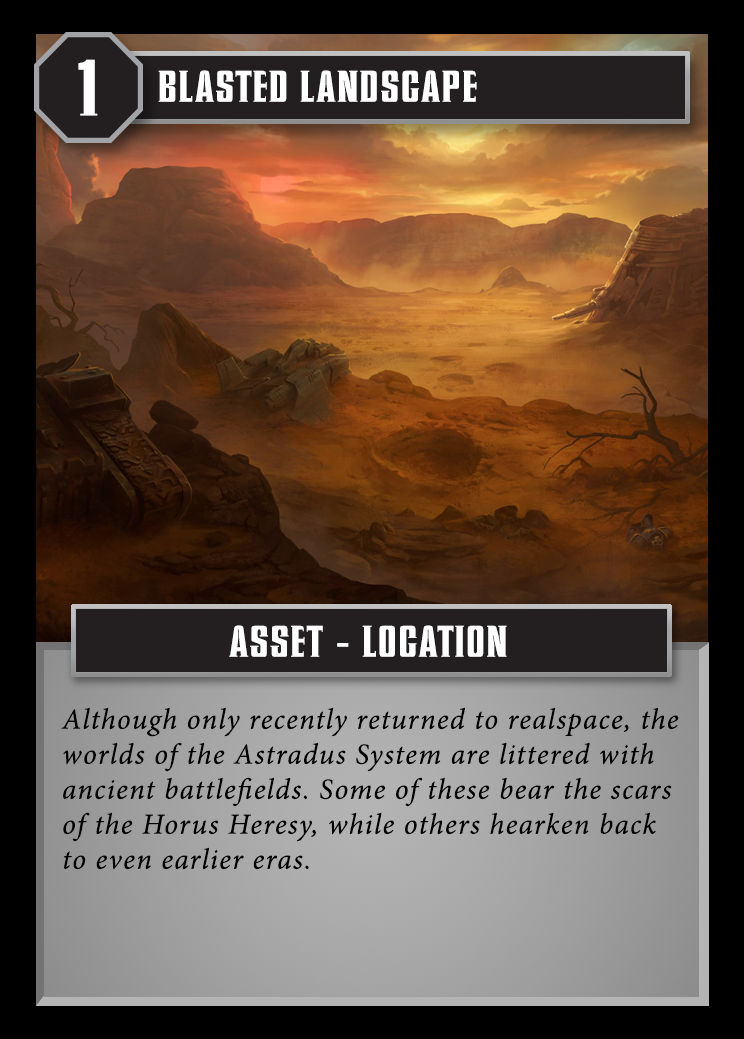 But others can be activated for in-game bonuses. Most of these affect your command points or your reserves rolls, but some have one-off effects for units. 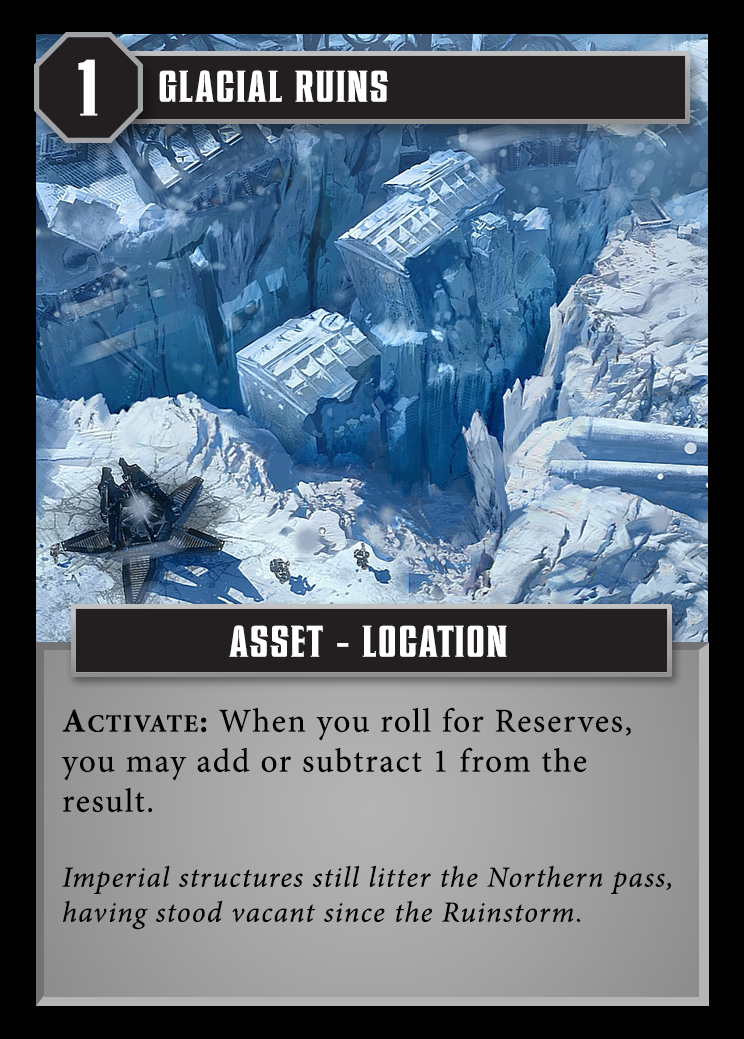 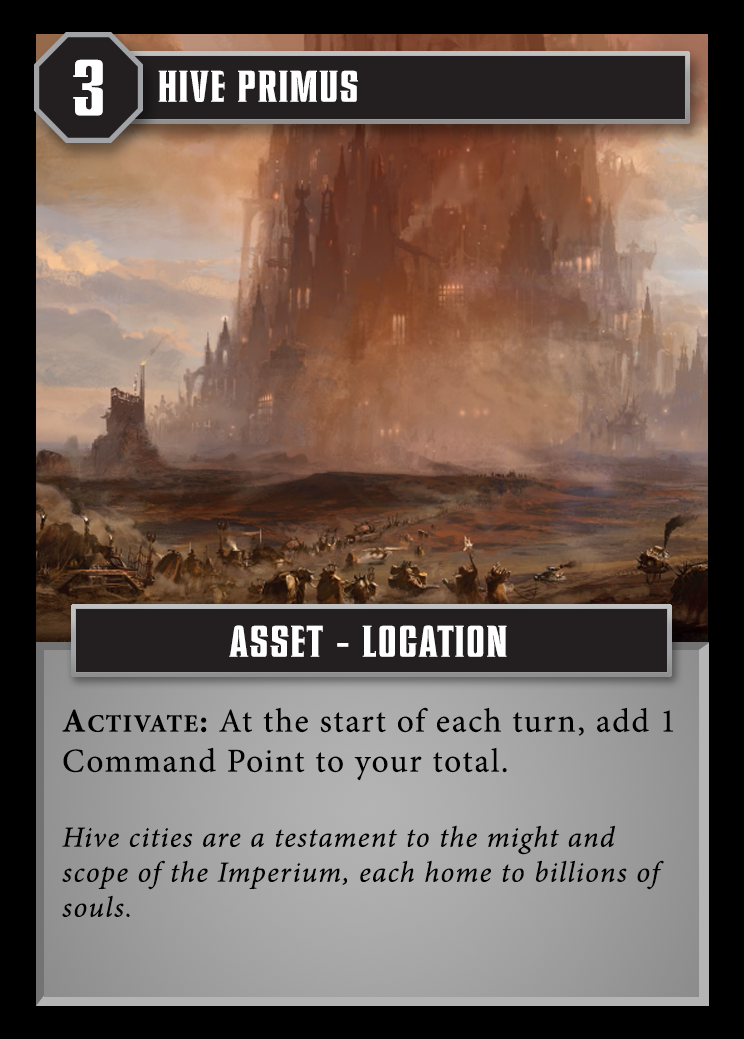 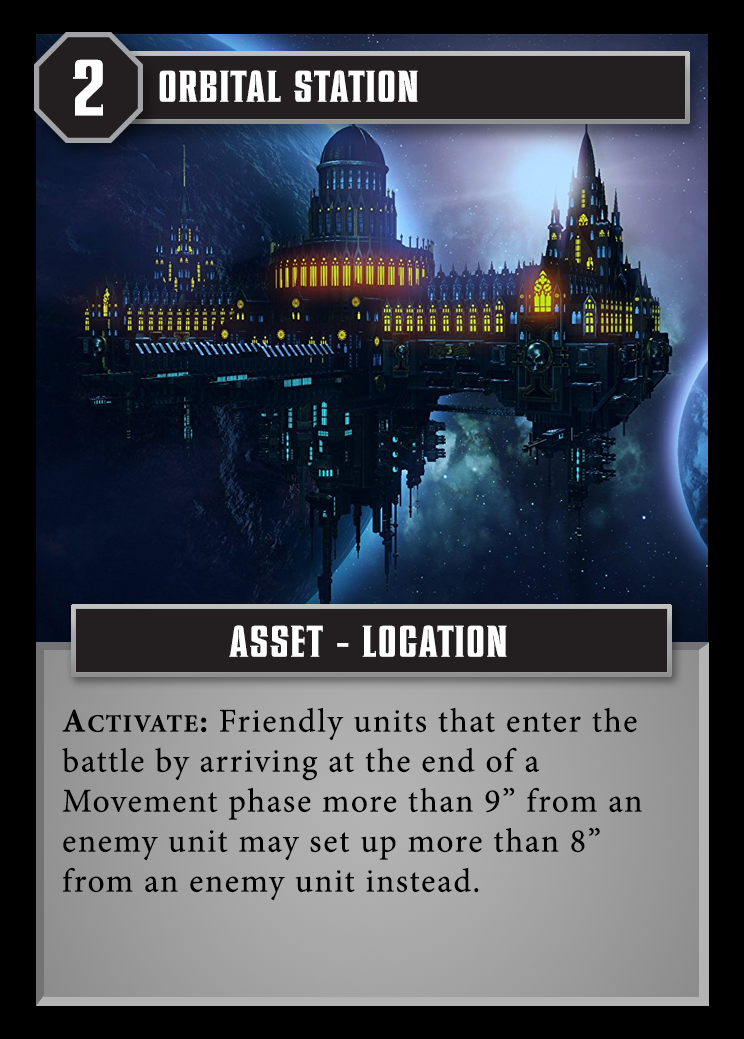 Early on, I played around with locations giving you points discounts on units, but eventually settled on purely in-game bonuses. I also added a few locations that can be Exhausted instead of just activated, giving a greater effect but at the cost of discarding the location permanently.

In addition to Locations, I added Relics and Allies, cards that represent the artifacts and allies an army might collect as they battle through the system. Relics can be attached to characters and some may circumvent normal faction restrictions, while an army can include a single ally per game, getting a free character added on to their army. 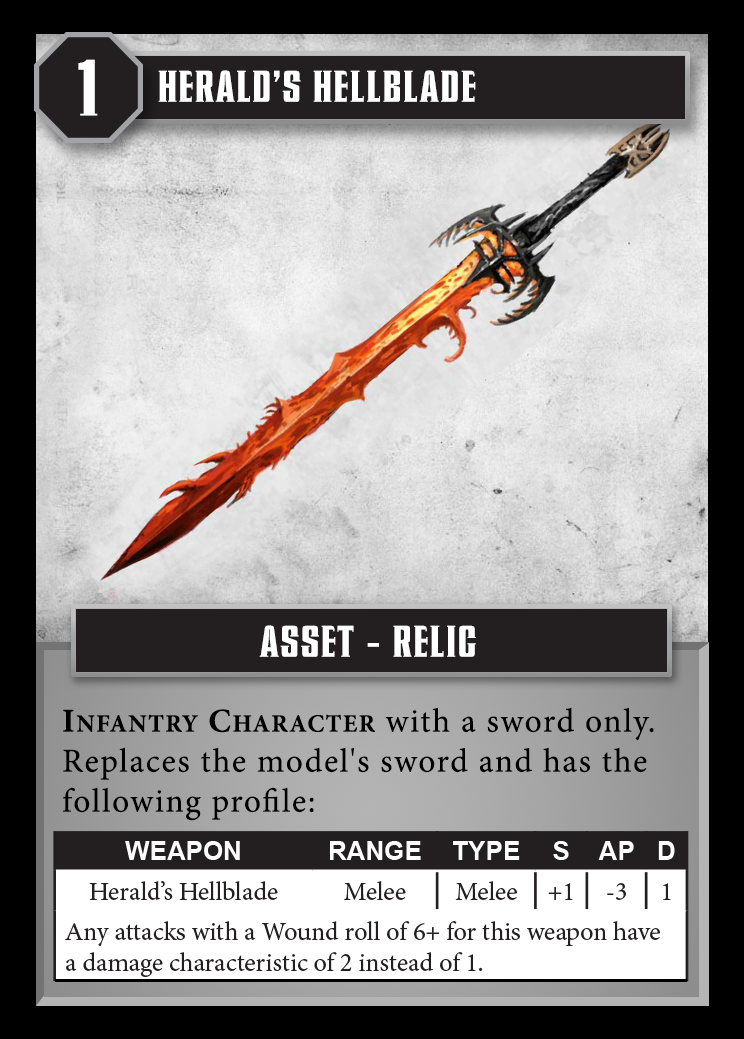 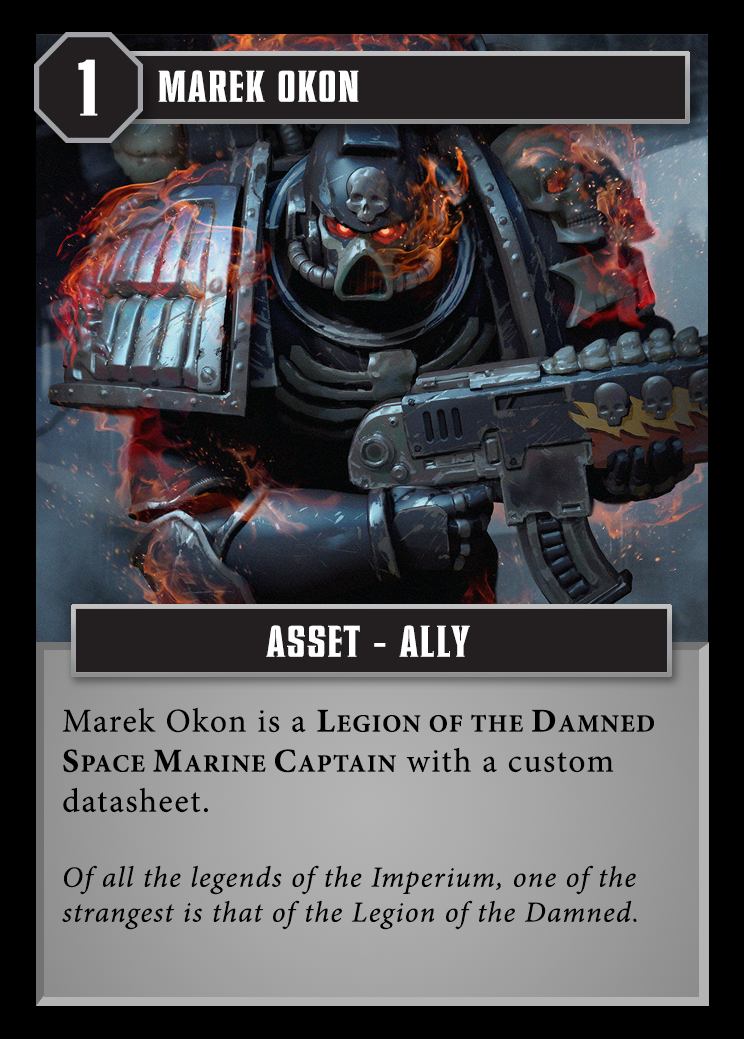 Finally, I made Events to essentially give me some tools as a GM to either add interesting flair to games, give additional rewards to players who got all their games in, and to help balance things out by having one-off boosts I could give to players who had been losing a lot of their games. A player can only use one event per game and they’re all single-use. A lot of these affect Maelstrom of War objectives. 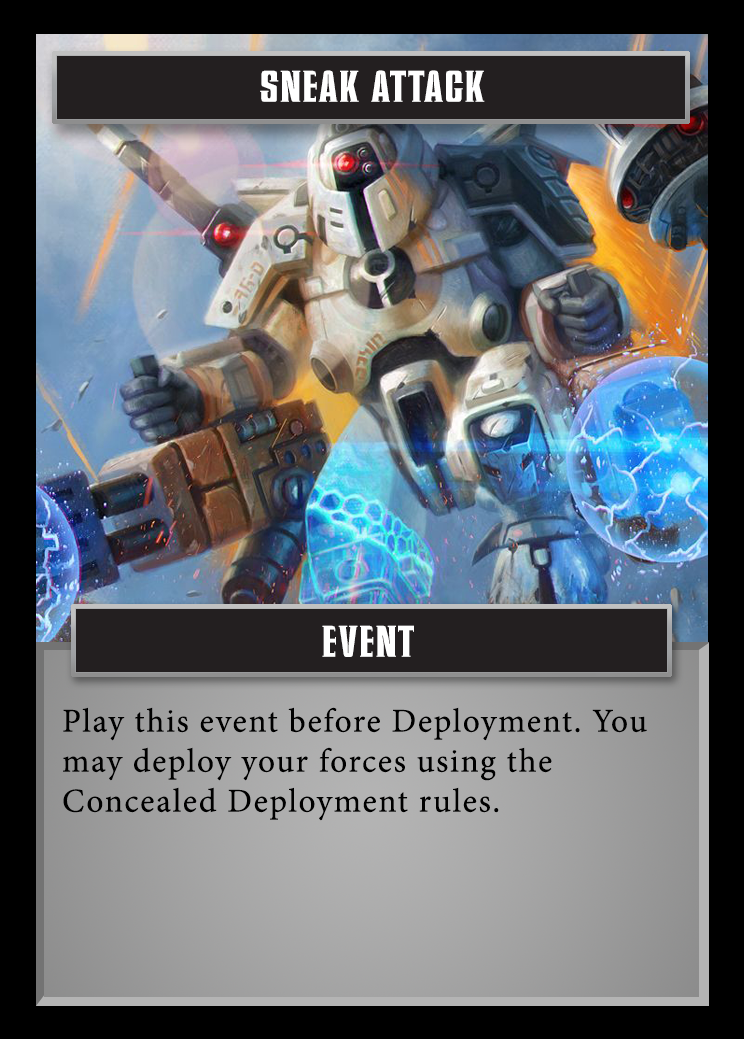 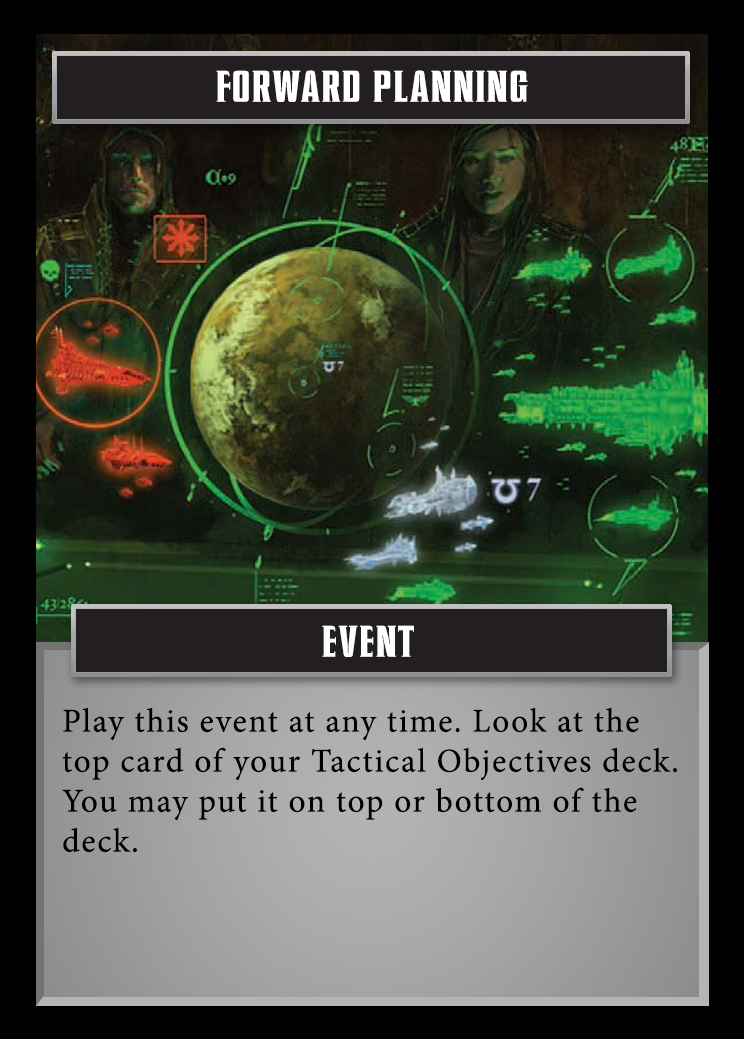 So generally, players collect cards and for each game they play they can activate up to one Location, Ally, and Relic, and play one Event. If that seems like a lot well, most players won’t have all four to use until very late in the campaign, if at all. One other thing about the cards is that I’m keeping most of them hidden from players — while they aren’t tradeable during the campaign, they’re still vaguely collectible, and I want my players speculating about what’s out there and feeling surprised when they get cool new cards. So mystery plays a big part of what I’m doing with them.

Once I’d designed the cards, I needed to print them. I used Makeplayingcards.com, which does professional custom printing. In total, I had 3 decks of about 164 cards printed out (I had to print many copies of the base/stakes cards so each player could have one, plus some locations I wanted to be more common than others). I created tiff files for each card, made a single back, uploaded them, and about $150 and a week and a half later, had gloss-coated, printed copies of the cards I’d made. And they’re just so fucking cool. 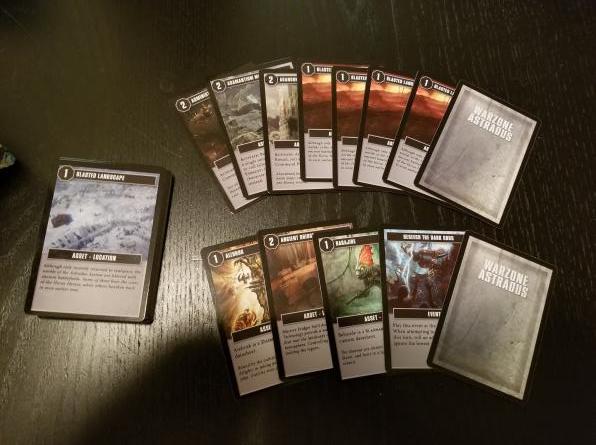 They smell fucking horrible, though. Like the opposite of Magic cards. Like, you know how Magic cards have this awesome smell that reminds you of the best parts of your childhood getting into nerd games for the first time and how everything was cool and new? Yeah these smell like someone ate that memory and shit it out into an open sewer.

Ok, that’s it for this bit. I’ll be back in a few days with another post about Custom Warlords and how we handled those in the campaign. And also the sweet rulebook for the campaign.