Kings of War’s Empire of Dust: True Kings of the Tombs 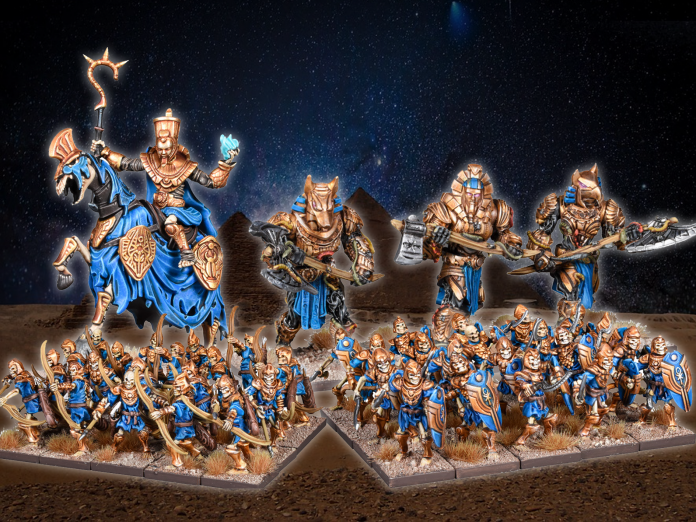 G’day Goonhammer readers! It’s been quite a week for Mantic, with all kinds of hot releases coming out. The Umbrella Academy Board Game was launched on Gamefound, but that wasn’t enough for Mantic. They opened the tombs and revealed a whole new range of Empire of Dust models for Kings of War!

The Empire of Dust are the Egyptian-inspired army of undead, marching forth from tomb cities and pyramids to re-establish the old Ahmunite empire. Unlike the more general armies of the Undead, there are no rotting corpses to be found amidst the ranks of the Empire of Dust, only the bones of the long-dead warriors and their leaders can be found, as well as intricate, statuesque constructs such as the Enslaved Guardians.

Up until this point, the Empire of Dust model range mostly consisted of units shared with the Undead range (Mummies), some with upgrade parts to make them more Egyptian (such as the Skeletons). To any of those that have assembled kits containing both metal and plastic, you will know these two materials do not go together easily, and are even less likely to stay together. These new models also reinforce the artistic flair that Mantic is bringing to such an evocative army.

Behold – The Empire of Dust in all their full plastic glory!

Skeletons and their Bling

The first wave of miniatures that are just now available for pre-order are the Skeleton infantry and cavalry kits. The skeletons can be built with spears or hand weapons accompanying a shield, or with bows.

The first thing one notices is just how bedecked these models are with their brilliant armour and striking blue robes. Paint jobs aside, this is part of the new look for the Empire of Dust.

The standard Undead forces of Pannithor consist of any corpse/skeleton that can be raised, bearing whatever tattered armour and weapons they have to hand. The Empire of Dust however were all once warriors of a powerful and wealthy empire, so it is fitting that they look the part. It also means that when someone drops their Empire of Dust army on the table, there will be no doubt that they are not just Undead (a common situation between Undead and Empire of Dust players).

There is more to the bedecked aesthetic than just looks, however, as Mantic detailed in their design blog. The addition of robes and more pieces of armour help bolster key weak points that are typical to slender skeleton models. Cloth wrapped around a knee or wrist not only looks fashionable, but ensures that these models are less likely to break. Avid gamers will be appreciative of this consideration, no one enjoys repairing what were once beautiful models after a tournament.

Looking closely at the models, one will notice that the Revenant Cavalry horses have extra armour panels along their flanks. These plastic undead horses have the flexibility to be lightly armoured or heavily armoured, depending on the application of the armour panels provided in the kit!

The riders also possess distinct differences, with the archers sharing much of the same design principles as the infantry skeletons. In contrast, the Revenant Cavalry riders carry much more intricate armour, including golden faceplates which give them a particularly implaccable feel.

Again, this is all about making a distinctly different from the Undead range of miniatures. Both armies have Revenant Cavalry, but now the Empire of Dust will look far more imperial, and will likely be the envy of many an Undead player.

This also suggests some Revenant infantry will be released at some point, toting a similar look with golden faceplates and fancy armour. Truly this will be one of Mantic’s finest looking Kings of War ranges by this time next year!

If the standard infantry and cavalry look this good, then how on Pannithor could the nobility stand out? The answer is, just add more gold! Some would say that having half of one’s body encased in gold is taking things a bit too far, but such critics don’t live long in the realm of the Ahmunites.

Both the High Priest and Army Standard Bearer on horses are new additions to the range of resin heroes, and the detail on these is crisp indeed. Having dealt with Mantic’s resin range quite a lot, these will be easy to put together and a delight to paint (just make sure to clean the resin thoroughly!).

The final exciting change to this first wave of releases is the transition from metal to resin for the Enslaved Guardians. This does not simply make the models easier to deal with, but Mantic also took the opportunity to increase the size of the models considerably. Previously they looked quite baby-like on their big large infantry bases, but now they fill them out nicely, and have earned their Height 3.

Skeletons (and more) on the Horizon

The revamped infantry and cavalry aren’t all that are coming to the Empire of Dust. Many units simply do not have models from Mantic, with collectors desperately acquiring models from defunct armies (cough Tomb Kings cough) to fill out their armies. Notably this includes the Revenant Chariots, which are arguably a major component of the Empire of Dust/Egyptian aesthetic.

Although the Tomb King chariots are classic kits, the fact they haven’t been in production for half a decade means they are in increasingly short supply. This is not good for new players that might not even know such old ranges are an option, and so they see an incomplete army on offer from Mantic. Thankfully, this will be a thing of the past.

The Revenant Chariot is well into development, and the Idol of Shobik and Monolith are not far behind. All of these make the Empire of Dust so interesting, hence it is very satisfying to see that they are officially getting released, and with some very thrilling models in the works. 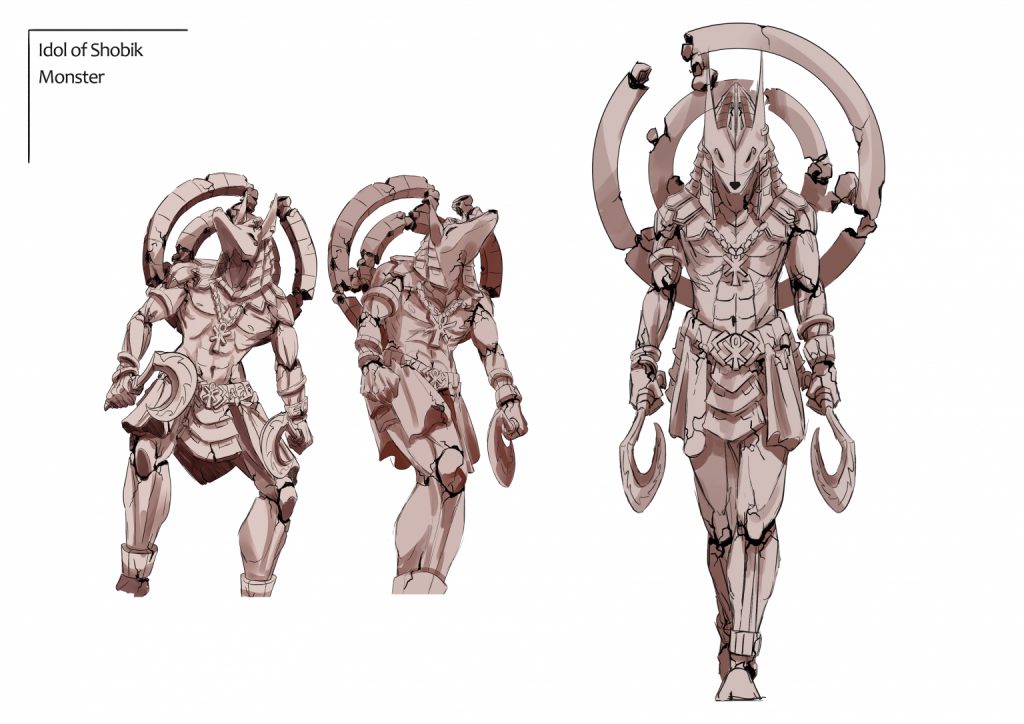 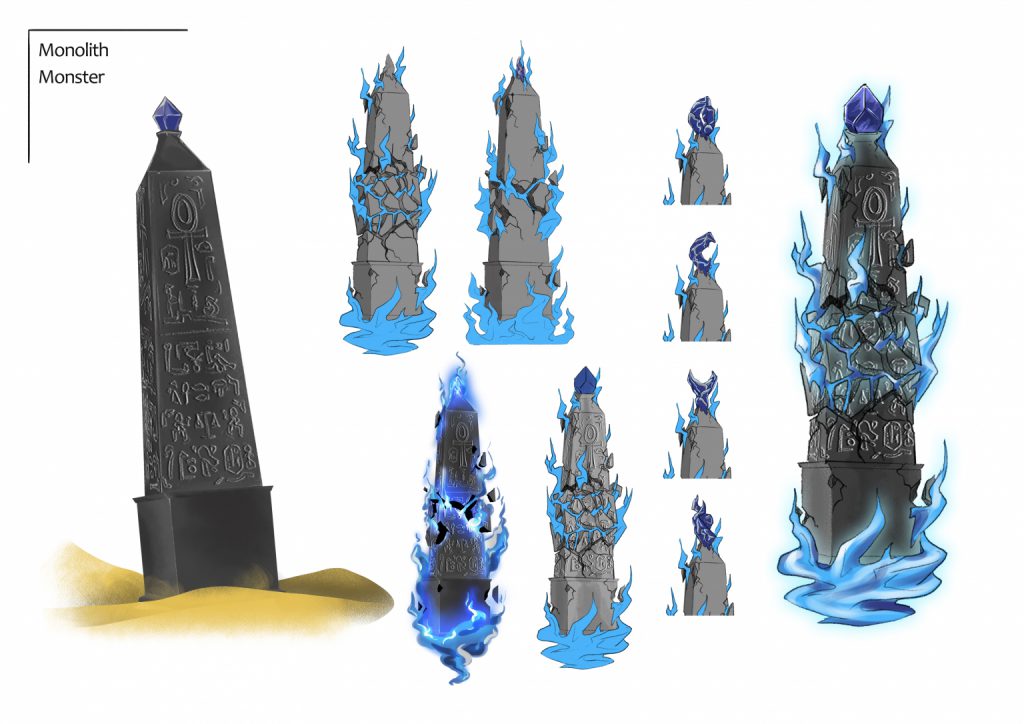 Raising Your Own Dusty Legions

One of the great things about a range refresh is the opportunity to redo the army boxes and Mantic have taken full advantage of that here. While the old army box had a bit of everything to start you off, some of the units don’t add up to much in competitive play. In the new army and mega army boxes you get the following improvements over the old box:

The only unit that is truly missing from this box that was in the old ones were the Balefire Catapults. These warmachines are the stuff of nightmares, as they are surprisingly consistent with the damage they can deal. This would certainly be a good purchase once the army box is all painted.

After that, well, we will have to see which of the upcoming units gets released next!

A New Approach in Mantic?

The last few years have seen armies come out with almost the complete range of units available from Mantic. This hasn’t always been the case. Many armies contain units in the army list with rules, but no models.

Some, like the Basileans, barely have this problem, but others, like the Northern Alliance or Nightstalkers, have quite a few units that just don’t exist in the Mantic range. This can promote creativity, seeking out exciting alternatives that fit the idea of the unit, with the rise of 3D printing particularly helping out. But many just get frustrated that they have to go out of their way to find models.

The fact that Mantic is going back to an older army such as the Empire of Dust and revamping the range as well as adding models for rules might indicate how they could approach other old armies. What do Succubi Larvae look like? Or Bloodworms or Hunters of the Wild? Much opportunity exists and it could be an even more exciting time to be a Kings of War player.