Necromunday: Dealing With Melee – Keep Your Corpse Out of the Grinder

A warning, Scummers! Groups of well-armed and insane cannibals have been spotted in the Underhive! This week on Necromunday, our hosts Dan and Jules impart some tips and tricks to take them out before you become meat for the Grinders!

Necromunda, up until now, has mostly been a game about shooting. There is, of course, an important melee element to the game, but the majority of the action is two gangs trying to blast each other off of the table, with the occasional slap-fight and renderization. That, however, is going to change drastically starting next week, with the release of Dark Uprising and the Corpse Grinder Cults.

The Corpse Grinder Cults, who hit the shelves next week, are insane cannibals who worship their version of the chaos god Khorne, who they call the God of Skin and Sinew. Instead of eating reconstituted human bodies pressed into bars or paste, also known as corpse starch, Corpse Grinder Cultists prefer their meat fresh and preferably still warm. To further their “eat all the people” agenda, they use a variety of brutal and wicked close-combat weapons to carve their opponents into more bite-sized pieces. 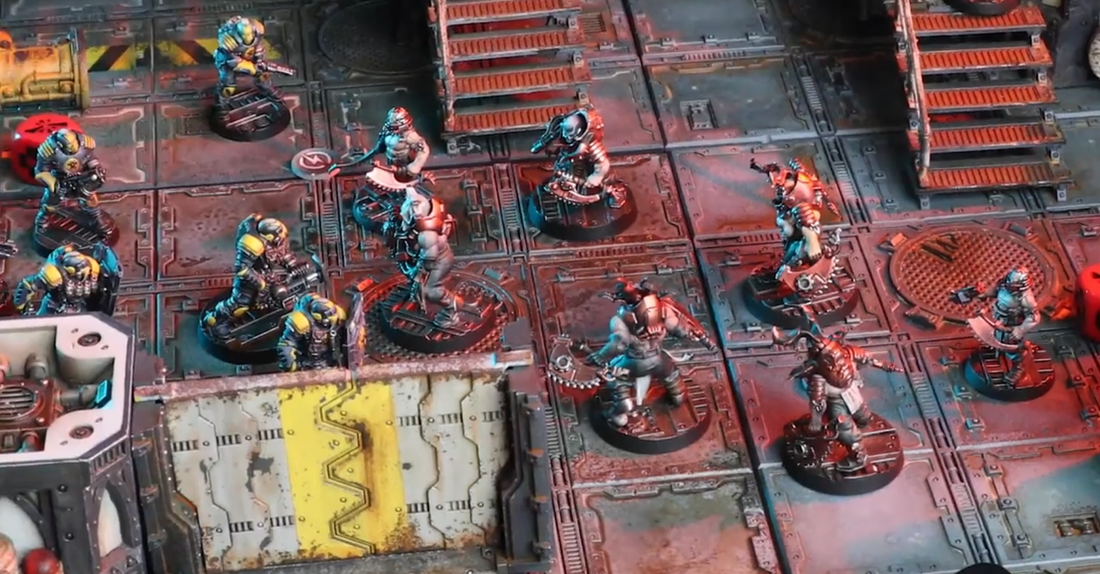 Too many cooks, here to spoil your broth. (Credit: Games Workshop)

Up to this point, the big melee threats in Necromunda have been Goliaths, certain Brutes, massed flail-wielding Chaos Helots, or Cawdor pole-arm parties. The Corpse Grinders are clearly going be the gang to beat in combat, and we at Necromunday wanted to put out a quick PSA of sorts regarding some of the strategies we’ve used against melee-heavy gangs in our groups. Close Combat is a facet of the game that we’ve all been taking for granted for way too long, so it’s time to bone up on some basic self-defense!

The longer you’re able to avoid close combat, the better chance your gang’ll have to soften the enemy up before the inevitable brawl.

How Close is Too Close?

Melee threat ranges are going to vary dramatically depending on the circumstances. The typical fighter will only be able to charge 8” on a lucky roll, but the more heavily a gang invests into close combat the more likely they’ll have also developed ways to increase that range. A Leader or Butcher with Overseer can order a fighter to double-move before making their charge, and anticipating an assault from 18” away is a far trickier proposition. Thankfully, this sort of tactic often ends up being a suicide run, as the charger finds himself surrounded by the enemy after he’s dealt his damage!

Tagging an enemy with a pinning shot is often the easiest way to prevent a charge, as most fighters will be stuck with one action remaining after standing up. This is where reliable basic weapons with moderate strength and decent accuracy bonuses like Lasguns and Autoguns are key, since they can be fielded in high numbers by most gangs. If an enemy is getting too close for comfort, focus fire until they’re forced to duck down and they’ll suddenly be much less of a threat until they can recoup. This is also a great time for blast weapons if your opponent is sending multiple potential chargers your way; provided you don’t scatter wildly off-course, you can pin entire groups of enemies with a single grenade!

Be wary of certain Champions and Brutes, as skills like Spring Up and Nerves of Steel will allow them to stand up for free or to ignore being pinned in the first place! We’d also like to remind folks that the Chaos Spawn is just straight-up un-pinnable. Ever. Run away from that dude. 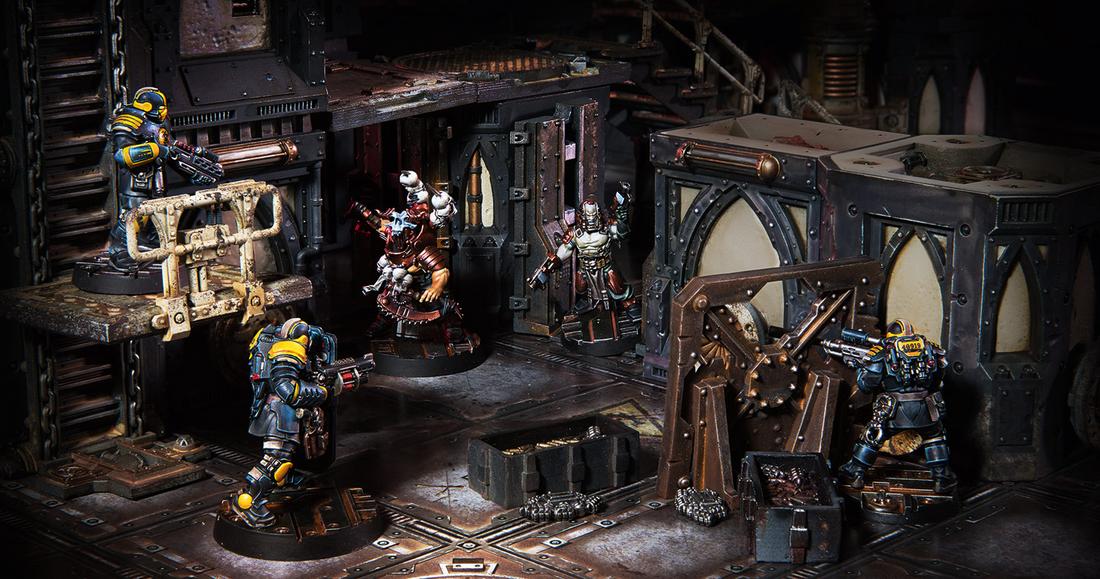 There’s a lot of negative connotations surrounding retreat, but any distance you put between yourself and the enemy is distance that they’re going to have to make up before they’re able to make contact. Activating with a Shoot action followed by a Move away will make things infinitely more difficult for whoever’s on your tail. Even in missions with static objectives or where the goal is to steal crates, the winner isn’t the guy who gets there first – only the person who winds up holding them in the end! Take your time, don’t rush, and don’t be afraid to fall back if it keeps your fighter out of danger for a little bit longer.

At only 20 credits a pop, the humble Frag Trap is an invaluable tool for channeling the enemy away from certain areas of the battlefield. Although it’ll only explode when triggered half the time, that threat is often enough for an opponent to think twice before stepping over, or will waste valuable time shooting it before moving on. Place your traps in tight corridors that would be ideal for flanking maneuvers to keep enemies from getting too tricky for their own good. Consider upgrading to Melta Traps once you’re credit-flush if you’d like your explosions to do considerably more damage when they go off!

A melee gang’s biggest weakness is that they’ve got to cross the distance between their gang and yours to take it to you. So maybe make that harder! A Grav-gun will drop beautiful 3” Graviton Pulses that cause any fighter that crosses it to halve their movement! Gunk Bombs not only make it easier to set someone on fire, but they also subtract 1” of movement from the gunked fighter, and cause them to lose the extra d3” on the charge. Don’t forget the battlefield itself, here, too. Position your fighters behind environmental effects like rubble or on upper levels. It will usually take twice as much movement to get across hazardous terrain, so think about positioning when dealing with a choppy (or punchy!) gang. 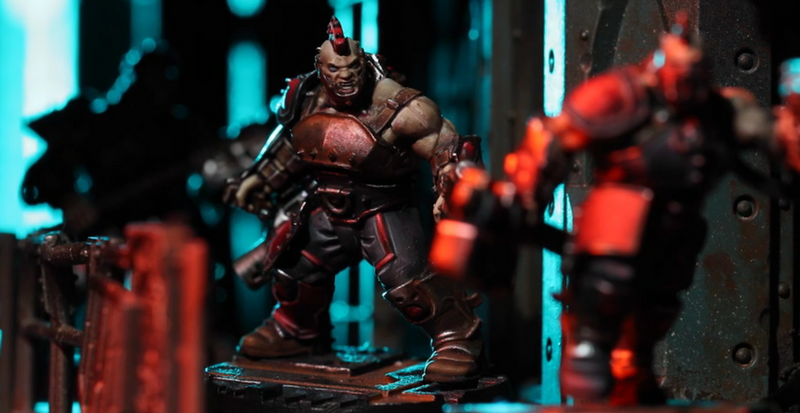 Unless they’re slow to begin with. Then they’re probably already used to it. (Credit: Games Workshop)

Damn, They Got In Anyway!

Don’t feel bad, it was bound to happen! Now don’t panic, and we’ll get through this together.

You were always going to get charged. You knew it all along, deep down in your heart. That’s why, as your opponent advanced on your firing line, you made certain to keep a regular Ganger or Juve between the enemy and the rest of your crew. Sure, that poor bastard probably immediately evaporated into a red mist, but Necromunda doesn’t allow consolidation into new combats (and even if it did, it would be in lieu of performing a Coup de Grace on your fallen comrade), so that axe-wielding enemy maniac is out in the open and at your mercy.

So what if they got in? That just means they’re close to your big bruiser! Whether or not it’s an Ambot, a Brute, or a tooled-up leader, having a fighter on your team that can make them pay for getting too close is always a good bet. Activate and charge in yourself, if you can manage to attack them outside of their vision arc they’ll be striking back with reaction attacks at -1 Weapon Skill if they turn to face you, and that’s if you’re not able to put them on the ground first!

The counter-charge is an excellent time to let your regular rank-and-file Gangers get in on the action as well, as each friendly fighter engaged against the same enemy will impart assistance bonuses to your close-combat accuracy, as well as interfering with the accuracy of their foe’s reaction attacks in turn.

Mini’s Leader is about to get wrecked by three Gangers hitting on 2s. Don’t be like Mini.

Just Shoot At Them. It’s Necromunda. Whatever.

Unlike Warhammer 40k, you can shoot into combat in Necromunda. It’s actually not that dangerous. There’s a -1 to hit penalty for shooting at a target that’s engaged, and if you miss you might hit your fighter on a 1-2-3. Depending on the firer’s Ballistic Skill and range modifiers, this proposition might still make a ton of sense.

Sometimes it just isn’t the smart move to pile in with every warm body you’ve got close by. Maybe your fighter is just as cut-off as the enemy, or maybe you’ve got multiple Goliaths in range just waiting to counter-counter-charge. Maybe they fellow who got charged in the first place just stubbornly refused to die, but would rather be shooting than throwing punches. Retreat, hope you pass Initiative to avoid a parting gift of reaction attacks, and scroll back up to the top of this article to try and keep it from happening again.

Well, that’s it, Scummers, the final week before a new book. We hope that you’re now armed with the knowledge to take out even the hungriest of cannibals and the roidiest of renderizer-ers. They might seem fearsome, but if you can keep a cool (and attached) head, you’ll dispose of them in no time. Stay tuned, and next week we’ll be going into all the goodies in the Book of Ruin and give our initial thoughts on the newest gang, Corpse Grinder Cults. Until then!

If you’ve got questions, gripes, concerns, or if you’d just like to let us know your own preferred methods of dealing with close combat in the Underhive, hit us up in the comments below or email us at contact@goonhammer.com! 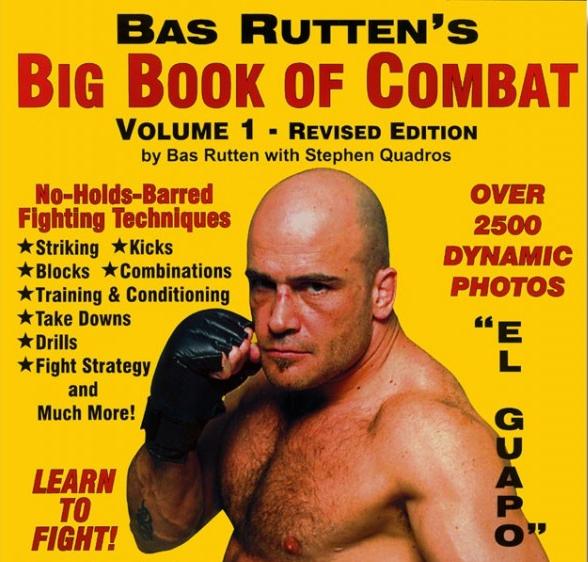 Now go back and re-read this whole thing in the voice of the true master. (Credit: Jennings Enterprises International)