Scummers, last week we debuted Mini-Munda, a quick and dirty system for jumping into Skirmish games of Necromunda as brand-new players. Today, we’ll be taking the concept a step further with an equally accessible home-brewed Campaign system!

As any grizzled player knows, Skirmish mode (defined here as one-off matches with fighters that remain static from game to game) is only a small taste of what makes Necromunda the greatest game. Necromunda is all about progression!

It’s about watching your fighters gain experience and get better at killing their enemies, scoring credits after a win and spending them on a fancy new gun, and (occasionally) watching your dudes whiff a grenade toss so spectacularly that it explodes at their feet and blows off one of their legs.

Gangs grow, evolve, and sometimes implode as they strive to be the Top Dogs at the end of a Campaign, and that climb is something that we feel Necromunda does best!

The campaign is ultimately built on a very simple framework: Be the first gang to reach five Victories!

With each notch on your belt, your gang will gain extra bonuses and gear and abilities as your renown and notoriety spreads. There’s no Rackets or Territories or Turf to keep track of in Mini-Munda, only sweet sweet gang-on-gang violence as crews duke it out for the coveted top spot.

The Mini-Munda campaign is intended to flow smoothly with two players, and can support more if your group requires. We’d recommend splitting into multiple campaigns if you’re dealing with more than four players, though. The system can handle it, but it can be a chore keeping track of everything.

Once you’ve all figured out who’s playing and everyone’s build up their gangs, it’s time to begin. The basic sequence of events for each game looks a little something like this:

In a two-player campaign, you’re not going to have much of an option with that first step, for obvious reasons. For larger groups (assuming everyone is wide open, schedule-wise), try to mix things up to get a variety of opponents and to ensure that folks are able to get roughly the same amount of games.

It can be daunting to challenge or be challenged by the gang in first place, but you’ll have a few tricks up your sleeve with Underdog Bonuses. It’ll be a tough fight, and it might not be the most strategically sound decision in the first place, but we believe in you. You got this!

We’re leaving Scenario selection in the hands of the players for this, rather than creating a tightly curated table to roll on. There’s 23 different Scenarios in the main Rulebook alone, so give them all a shot and figure out for yourselves which are the most enjoyable. Figuring out which ones might be particularly suited for your gang’s play-style would also be handy, but this is Necromunda. Actually winning turns out to be barely a secondary concern some times!

We’ve gone over the Rulebook Scenarios in depth here to give players a general gist of what’s in store, but keep in mind that alterations and restrictions in the Mini-Munda system may change the mission experience. As long as you don’t play Stand-Off endlessly, to the exclusion of all the other more inventive Scenarios, we’ll be happy.

The Spoils of Victory

As your gang proves their mettle by trouncing their opposition, they’ll gain not only the respect of the local citizenry but also the measured attentions of their House’s leadership. The favors granted from these sources come in many forms, but they’re all guaranteed to power up your crew!

For each game won, a gang will gain access to a new level of bonuses to be permanently applied for all subsequent games. These tiers are cumulative, so a gang with three wins to their name would receive the services of the Ammo-Jack, their Minor House Favor, and the Armor Cache.

A skilled Armorer on the run from Enforcers offers their skills in exchange for your protection.

When a member of your gang rolls for an Ammo Check, any natural 1s may be re-rolled.

You’ve been earmarked for bigger and better things by shadowy figures pulling unknown strings. The training manuals and equipment crates arrive at your hideout, unmarked but for your House’s Uphive seal.

Cawdor: Champion Caul the Keeper receives a Suspensor for his Crossbow. Firing this weapon is now a Shoot (Basic) action.

Delaque: Gangers Ulzcha and Horath receive Photo-Goggles. They are now able to shoot through Smoke Clouds.

Escher: Champion Jerra the Stalker is trained to use the technique Rain of Blows. Her Fight (Basic) action is now Fight (Simple), allowing it to be used twice in a single activation.

Goliath: Champion Turok and ganger Mongo may each use Stimm-Slugs once per game. When used at the start of their activation, remove a single Flesh Wound (if they have any) and increase their Movement, Strength, and Toughness by 1 for this round. Roll a d6 in the End Phase. On a 1, make an injury roll for that fighter.

Van Saar: A new recruit arrives! Include Lars in the Coldfire Cabal’s crew in all future games.

The local docs have taken up a collection to purchase your gang some extra defensive measures, most likely in an effort to curb your overly-frequent visits.

Your gang receives two sets of Armored Undersuits, which improve the wearer’s Armor Save by +1. These suits must be placed on different fighters, and may not be removed.

The fifth and final victory is so close you can taste it, and your House Patrons are more than willing to dole out a few more boons to push you over the line. Don’t fail them now!

Cawdor:  A new recruit arrives! Include Feebs in The Oathkept’s crew in all future games.

Delaque:  Ganger Ephemis is trained to use the technique Overwatch. If Ephemis is Standing, Active, and has not yet activated; when an enemy in Line of Sight activates, Ephemis can turn in their Ready Marker and make an immediate Shoot action. If this causes the enemy to become Pinned, their activation ends and their action is not made.

Escher: Gangers Jett and Dinah receive Hotshot Packs for their Lasguns, which now operate with the following weapon profile

Goliath: Champion Turok’s Axe is replaced with a Mastercrafted Renderizer. Every round, a single failed hit roll made with this weapon may be re-rolled.

Orlock: Gangers Old Jon, Grimm, and Hackjaw receive special ammunition to be used as an additional profile to their weapons listed below:

Van Saar: Champion Hannak is trained to use the technique Fast Shot. The Shoot (Basic) action is now Shoot (Simple), allowing it to be used twice in a single activation. 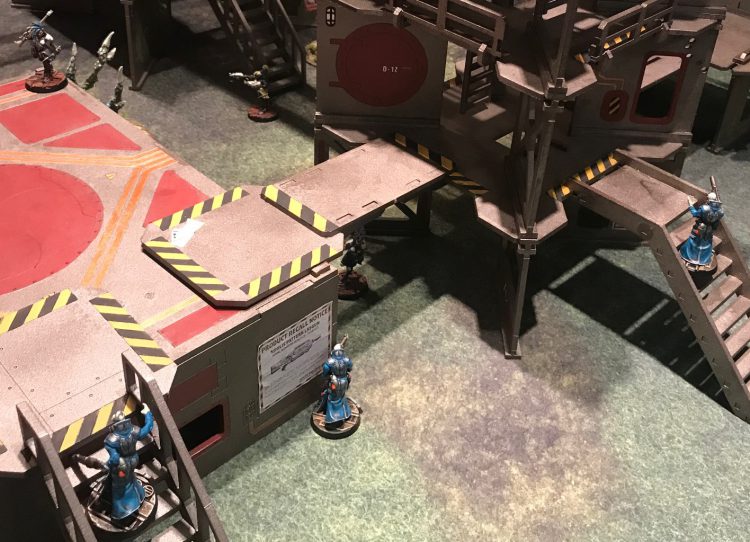 Life isn’t fair in the Underhive, but don’t give up hope! Some of your opponents may have you outgunned, but there’s no shame in pulling every dirty trick at your disposal to beat ‘em!

Once per game, you may use this ability after an enemy completes an attack with a ranged weapon. That weapon immediately runs out of ammo, as if it had failed an Ammo Check.

For the duration of this game, up to d3 friendly fighters with Lasting Injuries ignore the negative modifiers that would normally be applied to their stats.

During Deployment, after sides have been chosen but before any models are placed, the Underdog may place up to two Frag Traps anywhere on the battlefield. Roll a d6 after placing, on a roll of 6 these Traps may be upgraded to Melta Traps instead.

Four Wins Behind: History of Violence

During Deployment, the Underdog chooses an enemy ganger from their opponent’s crew. That fighter may not be deployed, or used in the battle in any way. They do not gain any Experience as a result of this battle.

Although thankfully not as lethal as in other campaigns, injuries in Mini-Munda have a chance to cause lasting damage to any fighter who’s been on the receiving end of one too many Autogun bullets.

When a fighter goes Out of Action, roll a d6. On a 1, they’re unlucky enough to have suffered a Lasting Injury. Mark their condition and the associated effect on their fighter card or whatever you’re using to keep track of their stats in-game. This effect will continue to apply in all future games of this campaign.

Practice makes perfect! As a gang progresses through a campaign, fighters will gain Experience (XP) through the following events:

Once accrued, Experience can be spent on Advancements after a game. Everyone will learn a little something eventually just by watching the heavy hitters brawl, but you’ll never rank up if you shirk away from wading into the thick of the fight!

Some missions have objectives beyond mere obliteration of all hostile forces. When a more measured hand is required, there’s bonus experience to be gained!

Follow all rules for XP rewards listed in their individual scenarios, and add these bonuses as well:

If you’ve gotten through this campaign, congratulations! We hope you enjoyed it, and there’s tons of fun to be had by diving into a larger official campaign system like Dominion, Law & Misrule, and Uprising. They’re infinitely more complex (and a whole lot more lethal) than Mini-Munda, but now that you’ve gotten a hang of things you’re ready to graduate to the bigger Domes!

Grab some friends and show them the ropes, browse through a couple articles on whatever topic strikes your fancy (this one in particular if you’re the unfortunate soul picked to be the Arbitrator), and dive head-first into a new campaign.

You’re part of the Underhive now, and we’re happy to have you with us.

Hell yeah, Mini-Munda! Scummers, these past two articles felt great, but you know what’s even greater? House of Blades goes on pre-order this Saturday! It’s finally happening! Be sure to order any cards you think you might use, maybe ever, because lord knows if you don’t do it now they’ll only be available on eBay for $$$ by next month. Gab with us about Escher, Mini-Munda, whatever you want; hit us up in the comments below or at necromunday@goonhammer.com!