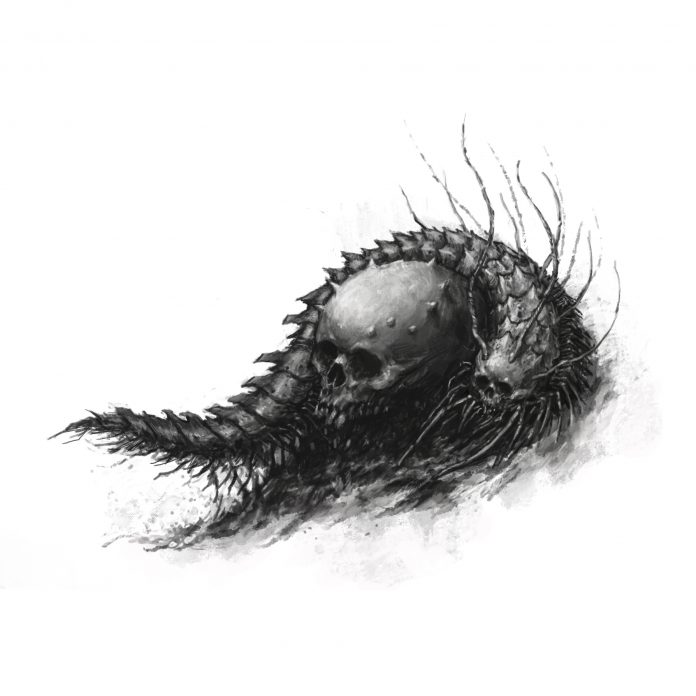 Necropolis is a self styled “narrative diorama skirmish game.” In a world devoid of life undead liches and their minions battle for power and resources through the ruins of the Endless City. This game builds on a DIY aesthetic and focus on storytelling in a similar way to Mordheim, AoS28, Turnip28, and Inq28. It recently won Best of Show at the South East London Wargames Group Show. The free ruleset was developed by Peter Vigors (@owlshield on Instagram) and is available on the Necropolis Discord (link here).

The rulebook in its latest iteration is a 42 page PDF. The ruleset is still being developed, but everything you need Tnecto play and more is contained within. There are sections covering lore, basic rules, warband creation, scenarios, and campaign. Also included are work in progress rules for solo and co-op play. Scattered throughout are bits of flavor text, short stories and wonderful illustrations by Martin Mccoy (@martin_mccoy on Instagram) who has also done art for 28 Mag. Overall it has a clean, professional feel and is reminiscent of the Mordheim rulebook.

Necropolis revolves around small warbands called ‘Gatherings’. These consist of a leader and up to six minions. The leader can be a lich (wizard) or a revenant (wight or warrior). At creation you choose a keyword for your leader; it can be Bone, Blood, or Plasm. These same keywords apply to the minions to determine their abilities. How you choose to interpret these keywords in terms of models is really up to your own creativity. Each entry contains several prompts to give you some ideas. To convey the basic idea though, a Corpse Husk (Blood) could be a zombie or ghoul, a Skeletal Husk (Bone) a skeleton or animated mass of bones, a Ghast Husk (Plasm) a ghost or phantom nightmare. Minions range from Small Beast and Familiars to Gigantic Horrors. The in game currency is called ‘Obols’ and is used to purchase minions and equipment for your Gathering.

To start with you’ll need miniatures, a 16in x 16in board, some D10’s and tokens to represent dropped mana and objectives. For models anything vaguely dead/undead will do. This is where my inner kitbasher activates and begins planning out all kinds of fun conversions. I have also been going back through my collection of Death/Vampire Counts/Undead to see what kind of Gatherings I can come up with. Another great avenue for putting together a Gathering would be Underworlds Warbands. The Ossiarch Bonereapers Kainan’s Reapers, necromancer with zombies of the Exiled Dead, nighthaunt Thorns of the Briar Queen, the skeletons of Sepulchral Guard (and the upcoming Sons of Velmorn from Gnarlwood!) would be more than enough for building an interesting Gathering. Oathmark Skeleton Infantry by North Star Military Figures is another good jumping in point, a sprue of five skeletons goes for around $10 on Ebay. For those of you with 3d printers or access to one Bestiarum Miniatures has a collection called Deadmire that is spot on for the mood of this game.

Creating a board can also be as simple or involved as you like. Owlshield has said that building small terrain boards was a motivating factor in creating the game, and the intention is to create a small diorama for Gatherings to clash on. Some walls, pillars and scatter terrain is enough to get you started. Warcry terrain would also be a good fit, and provide some more verticality to the gaming space. The Sigmarite Mausoleum kit has more than enough elements to fill out this size board.

After the roll off to determine initiative, players take turns activating models. Each model has two action points for doing things like moving, attacking, and picking up relics. Necropolis uses D10 system to determine combat and spellcasting results. There are no ‘failures’, only glancing blows for minor damage and hits for full damage. Each lich receives ‘mana dice’ that correspond to the blood, bone, and plasm keywords. The scenarios section includes a table of victory conditions to roll or pick from. Securing relics, striking down a rival model, and fighting NPCs are among the different objectives for the game.

Ambitions, part of the campaign section, are the personal goals of your leader and how your Gathering can develop over time. Each player chooses four Ambitions before the game that revolve around magic, battle, exploring, and reputation. They can be things like using all your mana dice, dropping and enemy with ranged attacks, or the leader holding a relic at end of game. After the game, a box is ticked for each Ambition achieved. When completing them for a set number of games there are rewards like obols, improved skills, and extra spells.