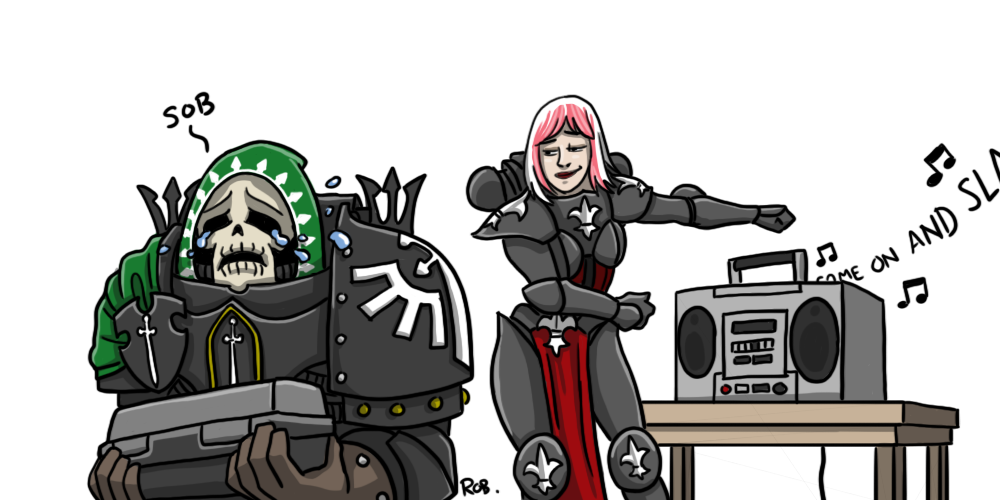 In advance of the upcoming release of Codex: Space Marines and as promised, Games Workshop dropped a massive FAQ update on us today (remember when we said fifteen books needed a FAQ? Turns out it was more). There’s a lot to digest, so we’re poring over every word of the updates and noting what’s changed and our thoughts on what it means for the faction. In this article we’re looking at Sisters of Battle and the changes to their Codex.

So, what weapons changed and got better? What’s that? Heavy Bolters, Flamers, and Meltas? And they didn’t get more expensive? I think that’s uuuh… checks codex …Yes, that’s ALL that sisters use. Everything. Apart from small arms, the occasional combi-weapon, and exorcist missiles, pretty much every significant gun that Sisters of Battle use got significantly better. You probably know these already, but I’ll go through the changes to these weapons briefly.

These are big game changers for sisters, and fundamentally transform their shooting game.

I’ll briefly go through a few more changes that are nice, but have somewhat less impact on the faction:

A few units come out of this FAQ quite transformed, and all for the better.

A few things got significantly better, but not quite to the point where it’s completely transformed their utility on the tabletop.

Overall, Sisters of Battle win big in this FAQ. Many of their unit configurations got massively better, and the changes open up a lot of flexibility and new list building options. Notably, you can now put down real ranged firepower without bringing Exorcists. It’s a brave new world out there, now go set it on fire in the Emperor’s name.