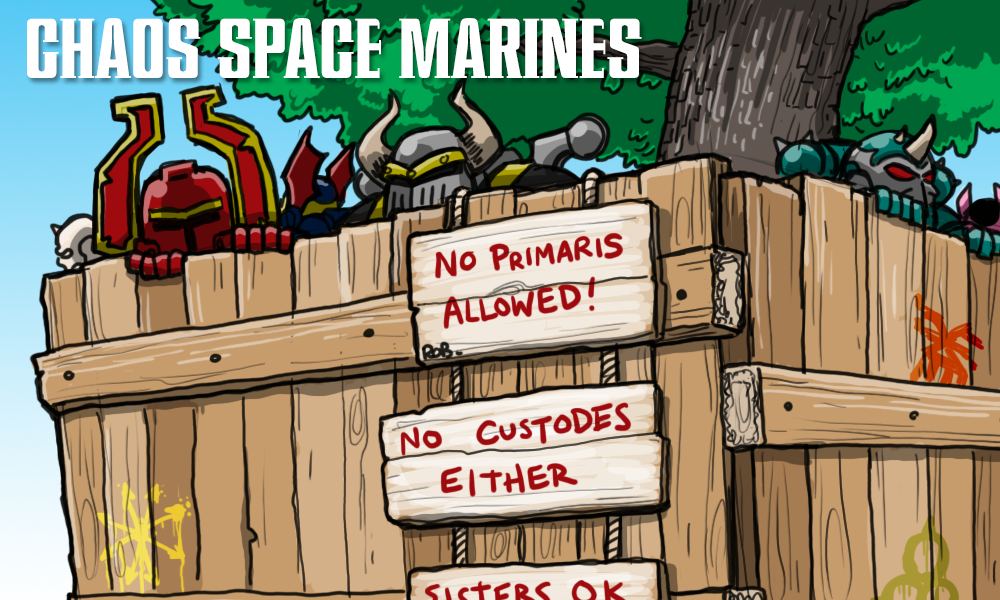 In advance of the upcoming release of Codex: Space Marines and as promised, Games Workshop dropped a massive FAQ update on us today (remember when we said fifteen books needed FAQs? Turns out it was more). There’s a lot to digest, so we’re poring over every word of the updates and noting what’s changed and our thoughts on what it means for the faction. In this article we’re looking at changes and updates to the forces of Chaos, and the changes made via FAQ to the following books:

The bulk of these changes were to add weapon profiles and adjust relics that replace updated weapons. No points changes have been issued for Chaos units, nor have any statlines been adjusted.

Let’s start with the minor stuff, which is the stuff related to Chaos Knights. The new FAQs for Chaos Knights and Engine War only update weapons profiles, including one relic in Engine War. The big updates here make meltaguns even better for War Dogs, since they can have a more consistent damage output. Overall these are minor changes, but nice to have. They shouldn’t dramatically change the faction or its outlook.

Chaos Space Marines, Faith and Fury, and War of the Spider (Creations of Bile)

A number of weapon profiles have changed though note that weapon costs have not changed. It seems like the points update we got with 9th took these into account already; this makes some weapons significantly better, and it makes others significantly worse compared to their marine counterparts – for example, thunder hammers are now AP-2 but still cost 40 points on characters, whereas they only cost 20 for marines. That sucks, and it would be a bigger deal if anyone ever took thunder hammers on Chaos Lords. Maybe after the Codex gets an update that makes DttFE proc on unmodified 6s.

Nothing appears to have changed for Faith and Fury, where the big change was stripping out everything related to the Black Templars and Space Marine rules. That’s a bit of a shame since it would have been nice to see similar buffs to some of the daemon weapon relics.

War of the Spider (Creations of Bile)

Likewise, no changes here for the Creations of Bile. There are some updates to imperial weapons.

Death Guard and War of the Spider

There’s nothing new in War of the Spider for Death Guard, so the big changes are all for weapons. These have already been detailed above. None of the Death Guard’s special plague weapons have changed, only their weapons that are available cross-codex. Note that Death Guard did not receive Astartes Chainswords, so if you take a Chaos Lord or other character that comes with a chainsword, note that they’ll get the shitty version that does not confer AP-1. As far as I can tell, that’s the only place this would matter. The big winner in all this is the Myphitic Blight-Hauler, which now gets two multi-melta shots at no additional cost, making them significantly more effective. Hell yeah!

Otherwise, these changes aren’t much of consideration for Death Guard, who tended to lean heavily on other options. There’s some consideration to be made for combi-meltas and power fists now, which have a more reliable damage output, and bubotic axes and baleswords now look a spot worse next to the power weapon cousins.

Thousand Sons and Ritual of the Damned

Nothing has changed in Ritual of the Damned for Thousand Sons, so the only changes are to the Codex. The big adjustments here are to relics/Sorcerous Arcana – the Seer’s Bane is now Strength +1 and the Prismatic Staff is now Strength +3, bringing them in-line with the force weapons they replace. Otherwise, the weapon changes are only for weapons shared with Codex: Space Marines, which means that while Thousand Sons’ flamers get extra range, warpflamers stay frustratingly locked at 9″. On the plus side, coming with S+1 power swords now at no additional cost makes Scarab Occult Terminators suddenly much more interesting, though the fact that they cost 38 points per model isn’t great. It’s not awful, but it’s not amazing.