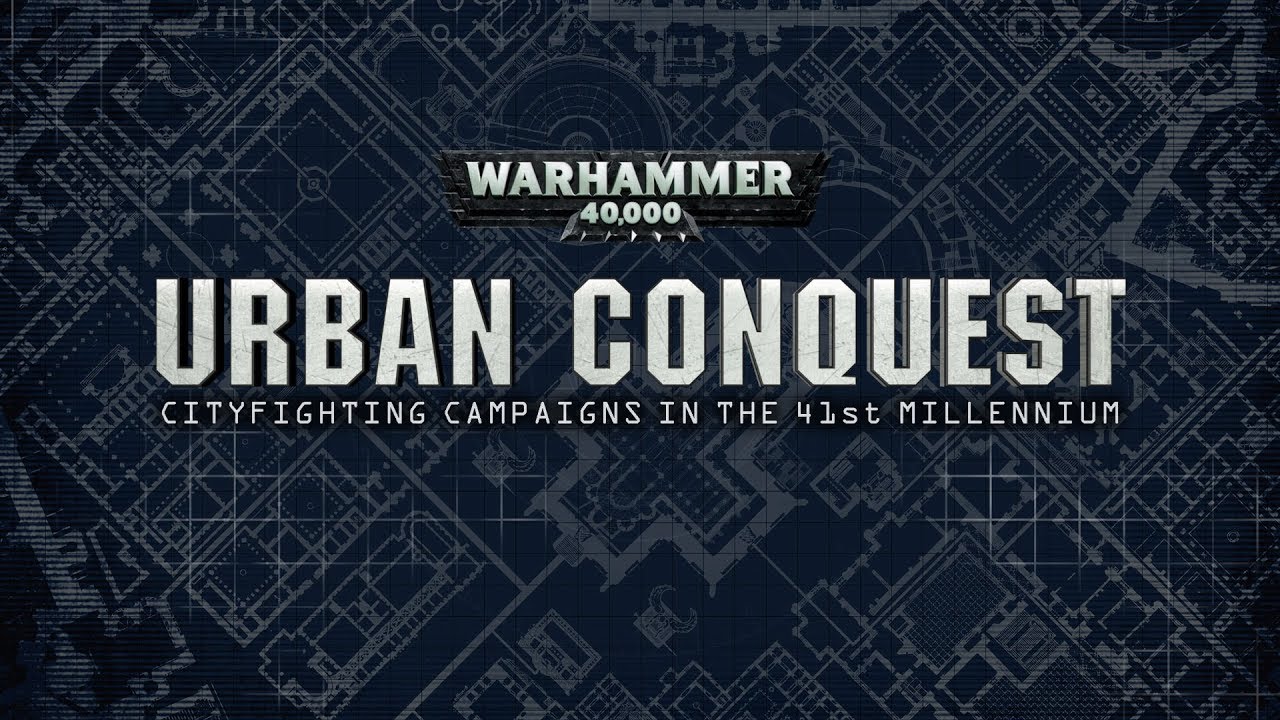 One of the products I’ve been most excited about since it’s somewhat under-the-radar reveal back in November is Urban Conquest, a Warhammer 40,000 campaign supplement designed around playing campaigns in hive cities. I just picked up a copy this weekend, and decided to post a quick review for those goons still on the fence about it.

The box basically comes with a rulebook, 4 sprues — 2 with City scatter terrain and 2 with objective markers, plus a bunch of cards and a large campaign mat. You’ve probably seen the sprues before, but if you haven’t, you can go check those out on the product pages.

The mat is way larger than I expected–it’s clearly meant to go on a wall, and made of plastic laminate. It’s pretty good quality, but it’s larger than the box it arrives in and so arrives folded. So it’ll need some smoothing out for proper use. Overall it’s a cool piece, but more suited for a game club or local store than someone’s house or apartment. 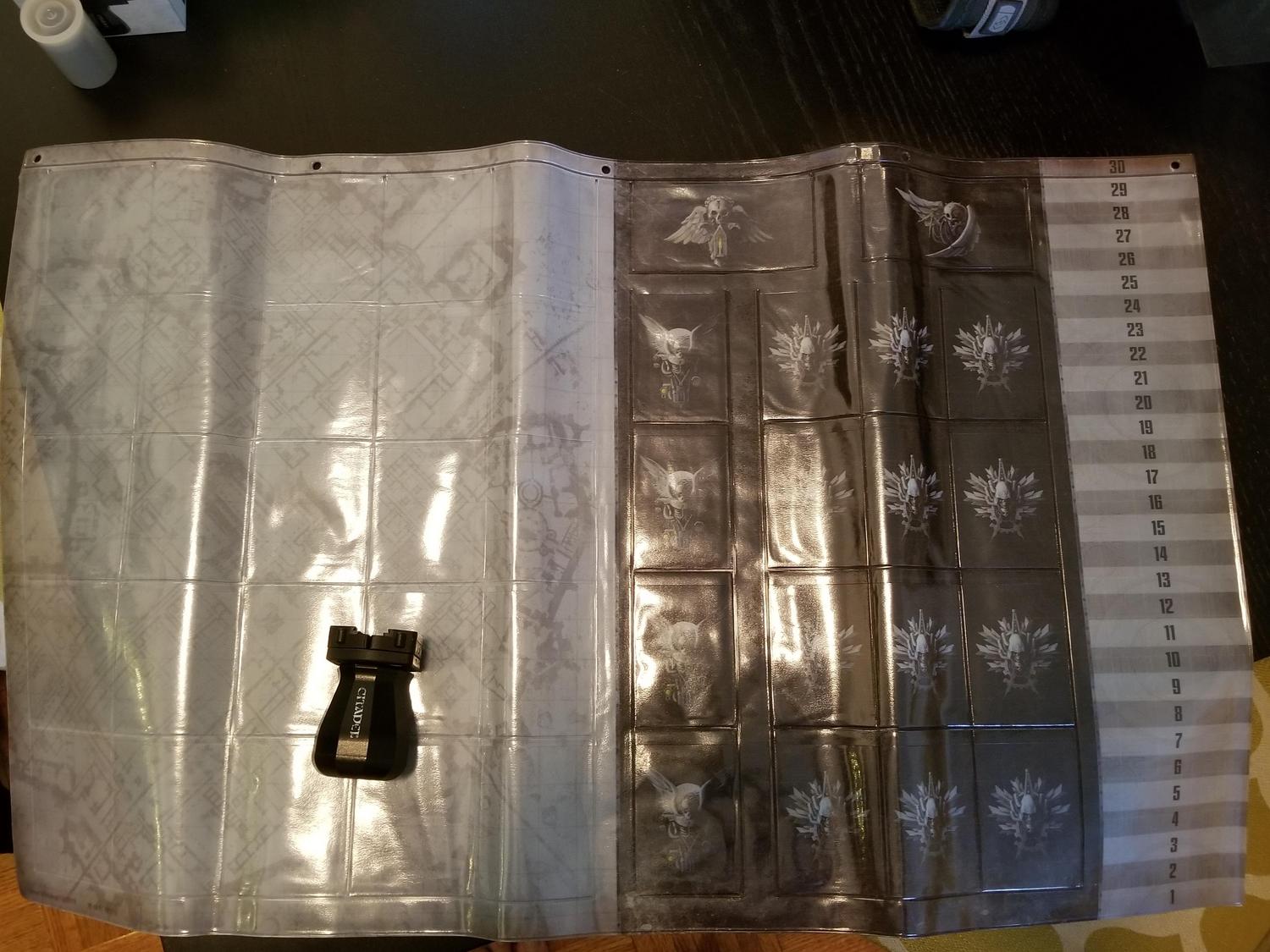 The box also comes with a series of cards. There’s a large deck of location cards designed to go into the map and plot out a full city. Of these, 5 are “special” locations, detailing one-off locations of strategic importance, such as the shield generator, power station, or orbital landing platform. These are all pretty cool, and high quality. In addition to these, there are 3 objective cards (more on those later), a bunch of Random Event cards with crazy effects, a small set of player Information cards, and a stack of Strategic Resource cards that can be purchased using the campaign’s main resource, strategic points. One thing you’ll notice about all of these cards is that they are all custom, non-standard sizes. Which, OK isn’t that big a deal, but it also meant that I don’t have any sleeves that fit them, not even the ones I have sized for the old objective cards in 7th edition. I found this to be pretty annoying, but otherwise the cards are cool. 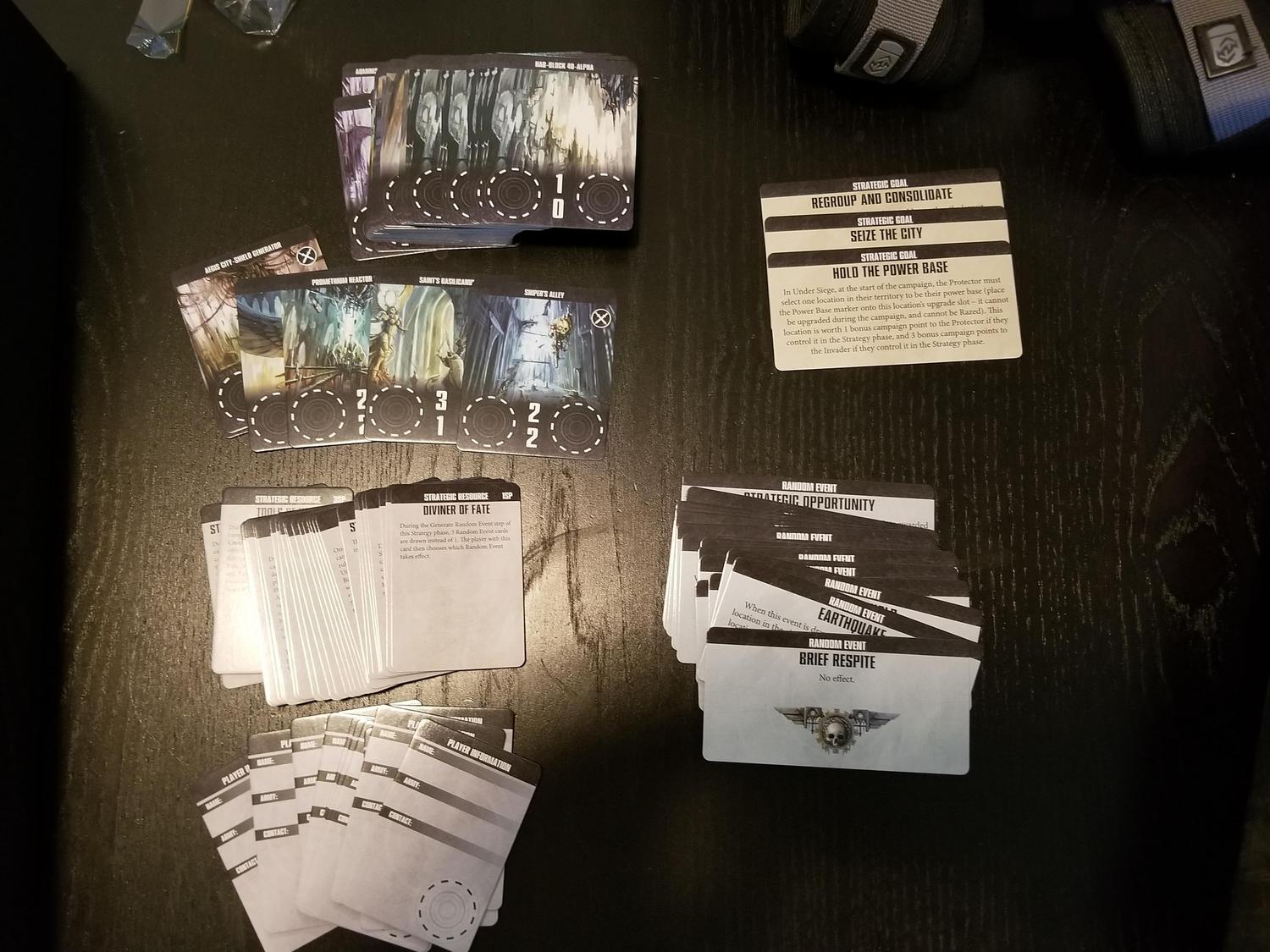 There are also some plastic, removable peel-off stickers that can be applied to the map to denote territory upgrades and player control. These are neat, and I like the concept behind them. 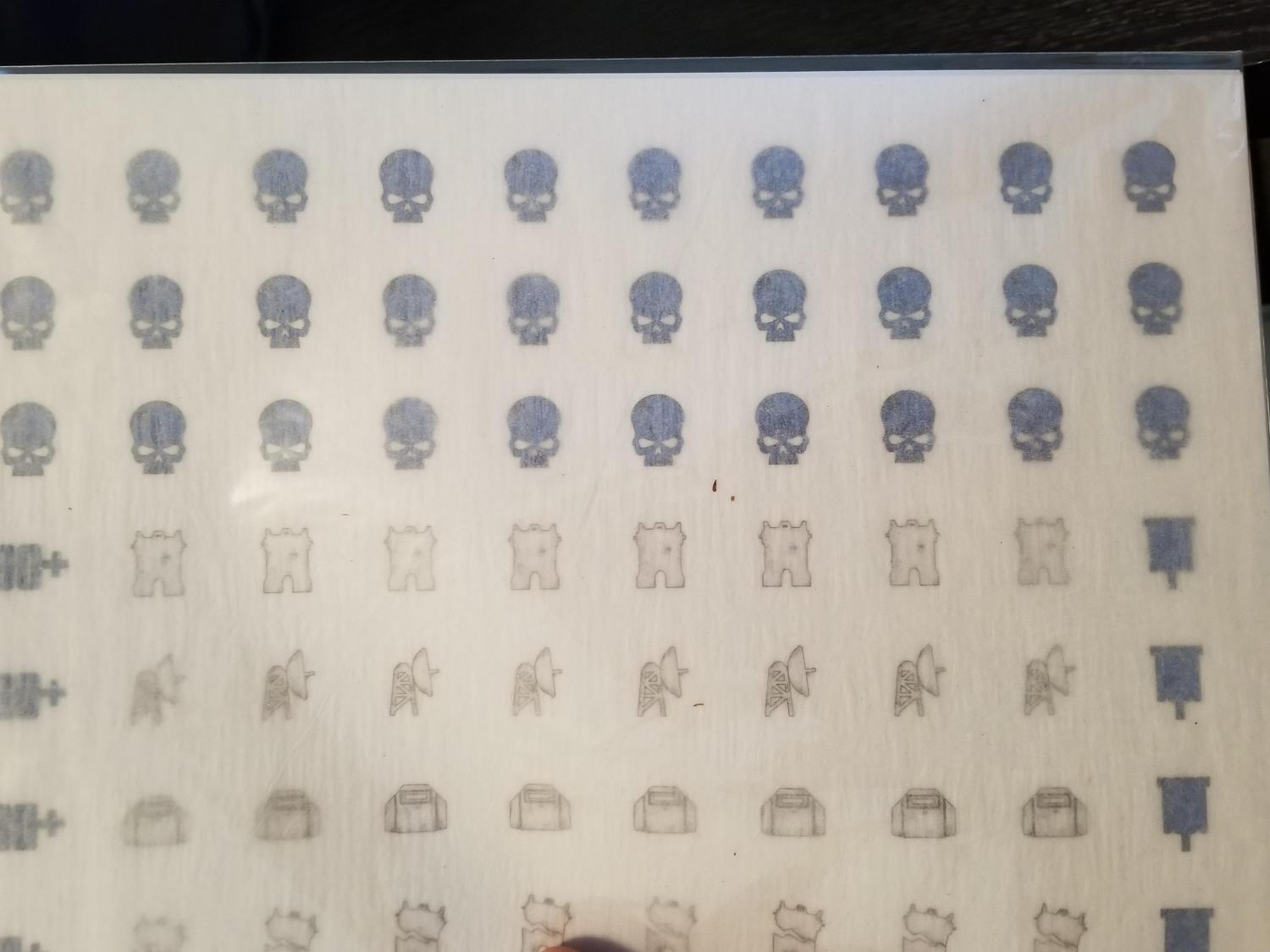 Overall, it’s a solid collection, though the contents feel a little sparse, and I noticed that the box felt a little empty for what it contained. This is probably because they use standardized box sizes. Anyways, what’s notably not in the box is a set of Maelstrom of War cards for Cities of Death missions. I’ll get into this more later, but the book contains Matched Play missions for the Cities of Death rules. These can be played with either Eternal War or Maelstrom of War settings, and while they’re pretty cool, I don’t see the Maelstrom versions getting much play without a deck of cards to draw from. I was hoping the new Cities of Death objectives would be the same as the old deck that was published in White Dwarf, but no dice–they’re very close, but about 12 of the cards are different, and use new effects based on the new Key Building Stratagems (also, more on those later).

The fluff is alright. I haven’t read most of it. I’m more of a crunch guy, so let’s dive into the rest.

The campaign rules start with a recap of campaigns that’s lifted almost verbatim from the core rulebook, but includes a new table for matrix campaigns that’s used extensively in Streets of Death campaigns. The campaign rules give players 3 set-ups that each use a different objective (one is “capture the most territory,” another is “capture territories in an unbroken line,” and the third is “hold this specific territory.” Campaigns start by randomly generating a cityscape using the cards, then allocating player-held territories. The special location cards are optional, and they’re all tied to specific buildings/terrain pieces, such that if you don’t own those, they recommend not using them.

Campaign rounds are generally split into 2 phases, where in the first phase you play your games, and then in the second you score points, buy strategic asset cards, seize territories, and generate new random events. Players score strategy points based on the territories they control (the numbers on those territories determine this), then use points to buy strategic resources from the deck. This is done by putting out all the cards and letting players buy them going in order from whoever has the most points to the least, and again and so on until no one wants to buy any. The cards have a bunch of effects that range from upgrading a location you hold to letting you assault a special location to changing how many points you win from a campaign victory. They’re all tied to campaign effects, and none of them seem to affect the games played. As-written, campaigns last X rounds, and players who lose all their territory can get back in rather than playing to a single player controlling the city.

Overall, these rules are solid, but I haven’t tested them. They don’t add much additional complexity, which is a good thing. Something I really liked was that there’s an additional section for taking the rules further. This includes making your own special locations and adding fog of war. My favorite part of this is that they added guidance for combining these rules with Kill Team and Planetary Onslaught campaigns. The former is pretty simple and the latter isn’t as seamless as you’d like, but it’s still a nice touch and I like the notion of combining a bunch of these products for stupidly complicated grandiose campaigns that no one’s ever gonna run (OK, I might, but more on that in a future post). Anyways, the rules are decent, and I absolutely want to play them at some point. Streets of Death campaigns seem to work best with 4 players, but I could see 2-player efforts being fun.

3. Rules for Cities of Death

The Rules or Cities of Death, which were in Chapter Approved: 2018 Edition, have also been printed here. If you didn’t buy Chapter Approved 2018 (though I’m seriously baffled why you wouldn’t have, but OK sure, whatever), then you can get them here. They really are fantastic, and I know a lot of people planning to play with these because of the adjustments they make to cover. They’re really strong overall, but they also come with a bunch of stratagems that I think are… well, they’re a bit too much and I think they’ll get ignored more often than not. But the rules for cover, assaults, and firing from higher up are all great. Urban Conquest introduces a new set of 6 Stratagems called Key Building stratagems, that are just for upgrading buildings in a Cities of Death game. These basically make buildings into bases with interesting bonuses like letting units in a building re-roll hits or giving them invulns or giving you back CP, but they also can make capturing the building worth more CP to the opponent. They’re interesting, and probably more likely to be used than the standard CoD stratagems, but still extra stuff. Also, they can only be used on ruins or Sector Mechanicus terrain, not fortifications, which in my opinion is kind of a big miss, since fortifications were already not worth taking and this might have helped. I might test how letting them go on fortifications works in some future games.

The book includes the 6 Narrative Cities of Death missions, plus 3 Open play ones and the 3 battle zones from Chapter Approved 2018. Those are fine, but in addition to those, they’ve included 6 Special Location Missions for the Streets of Death campaign that focus on specific terrain pieces (such as a spaceport or city shield-generator), and have special rules that go with those. These all seem pretty neat, and the terrain they show for the special pieces is really cool, but also really expensive to build (the Shield generator requires two building kits and a void-shield generator, while the orbital shuttlepoint is shown with two aquila landing pads, which are out of production now anyways. Though since I’m exactly the kind of idiot who owns two Aquila landing pads, I was obviously immediately excited about having an excuse to use both. The best part of these missions is that they show off a ton of really awesome ways to build terrain using the Sector Imperialis and Sector Mechanicus kits, which are just amazingly modular.

Finally, the book includes six Matched Play Cities of Death missions, which I think will interest a lot of casual players looking to integrate Cities of Death rules into regular games. All of these can be played with either Malestrom or Eternal War objectives, though as I mentioned earlier, I strongly suspect that the lack of a deck will make the former way less common than the latter. These are all pretty straightforward, and use the conceit that in Cities of Death, objective markers have to be placed in buildings or ruins. This is similar to the old rule that made the buildings themselves objective markers, which I preferred, but as long as they’re including objective markers in the box, I see why they changed it. Otherwise, these missions are fine, if a little boring. The Cities of Death maelstrom objectives are fun, and the 7th edition set were essentially the template for the 8th edition standard objective set, so the experience is fairly similar, albeit with some extra bonuses if you’re using the Key Building stratagems.

Urban Conquest is right up my alley. It appeals to the part of me that loves campaigns, extra crunch, having more missions, and the part of me that loves printed materials. That said, if you aren’t planning on running a campaign, there’s not nearly as much to recommend about it, especially if you already bought Chapter Approved 2018 and have the Cities of Death rules there. The terrain and matched play missions aren’t really enough to justify the $100 price tag in that case. If you are a campaign fan and were interested in running a campaign with these rules though, then yeah I’d absolutely recommend it. It’s the kind of thing where even if you don’t end up using the exact rules (though those are solid), there’s enough here to cannibalize for other campaigns that I think it’s worth owning. Plus, the terrain and objectives are pretty sweet.