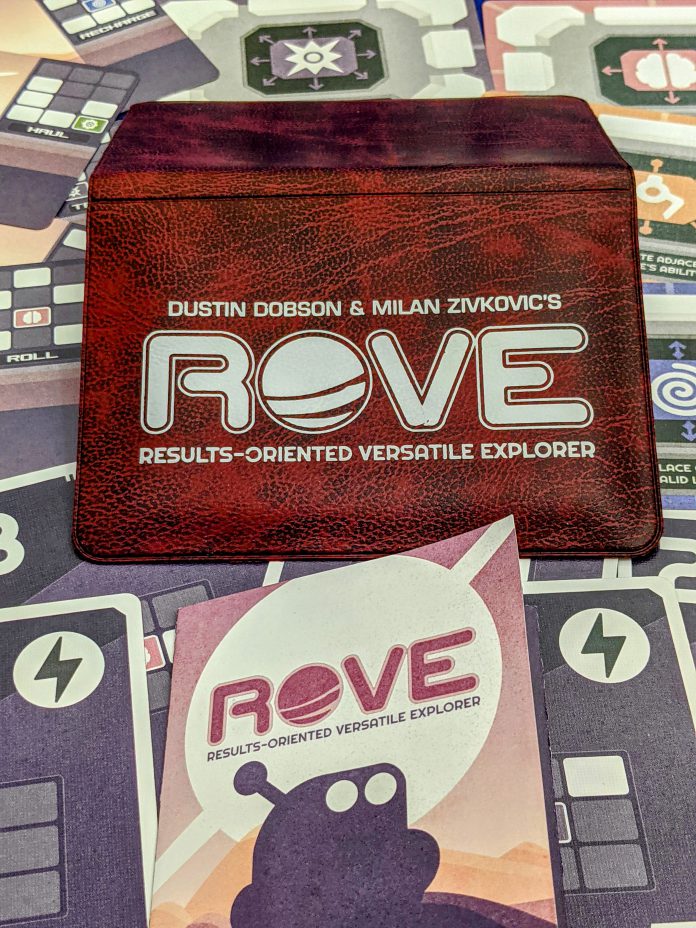 ROVE (designed by Dustin Dobson & Milan Zivkovic for Button Shy Games) is an 18-card, abstract, solo, spatial puzzle game. Based on my tastes and strengths, almost every descriptive word in that previous sentence is makes me itchy and adversarial.

Abstracts are my Achilles heel. Spatial puzzlers are my kryptonite. And while I like the idea of Gaming for One™, solo boardgames are always the metaphorical late-night talk show guest that gets bumped – for a multi-player, or for other any other solo activity except analog gaming by myself.

As befits an abstract game I buried the “but what is the game’s theme?” lede. You are ROVE, the Results-Oriented Versatile Explorer. (Think Mars Rover, or Wall-E.) You have crash-landed on a planet. You must gather your surveyor’s modules, strewn across the alien landscape (your table), with a finite amount of energy to expend in doing so. As fleshed out as this is, I didn’t really think of ROVE’s setting or prologue while playing it. I was thinking about how bad I am at chess.

ROVE reminds me of chess. And not because I got smoked in my first game of chess and ROVE, which lasted even less time than my first Scholar’s Mate humiliation. ROVE isn’t like playing chess but it’s a lot like sussing out knotty chess problems to practice chess. In both cases you work out the best checkmate using the pieces and powers at your disposal in the best economy of moves.

Additionally each module card has a game-breaking, one-off superpower. Swap any two module cards on the table. Shift any module one space. Teleport one anywhere on the tableau. So you can mix and match these moves anytime as “interrupts,” but they are one-and-done so you want to pick your spots carefully. 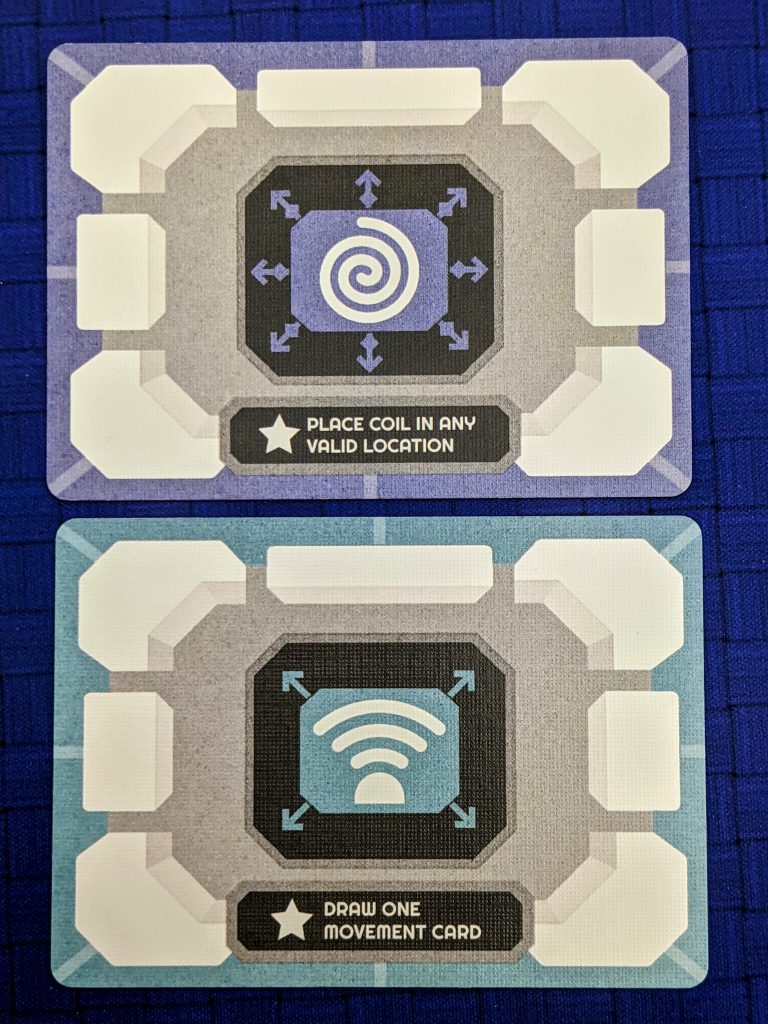 These six module cards are powered by the other 12 ROVE cards, which are double-sided and multi-use. One side are “missions” – spatial patterns you must replicate through optimal movement of the six module cards on the board. Every mission is a six-card pattern with a specific module card as its anchor. The other five cards must be arranged in relation to the designated anchor module card shown on the mission.

The other side of the mission cards are movement cards with two different movement point values at top and bottom. The top value (1,2, or 3 points) is the default moves you get when you play it. The bottom value (3, 4, or 5 points – always better) can only be used if, prior to playing a movement card, the six-card tableau of module cards matches the three-card pattern (and matching “anchor” card) depicted on the card you play.

When moving module cards there are unbreakable rules: a movement point allows one card one move (you could use all your movement points on one module in a turn, but do that too often and you will lose). You can move across other cards, but cards cannot stack; all six must always be visible. And a card can never be “stranded” from its mates. Meaning modules on the table can temporarily be lonely islands during movement, but must end adjacent to at least one other card (orthogonally or diagonal).

You start with five movement cards and one active mission to complete. If you complete a mission you take the next card from the deck and immediately start sweating out the new pattern you need to match. You also get to draw a movement card; this is the only time you gain movement cards.

To win you must complete seven mission cards before you run out of movement cards in your hand. Since you only gain one card for a completed mission, this means it’s easy to starve unless you ace or birdie mission cards fairly regularly to preserve enough movement cards to get you through seven wins. 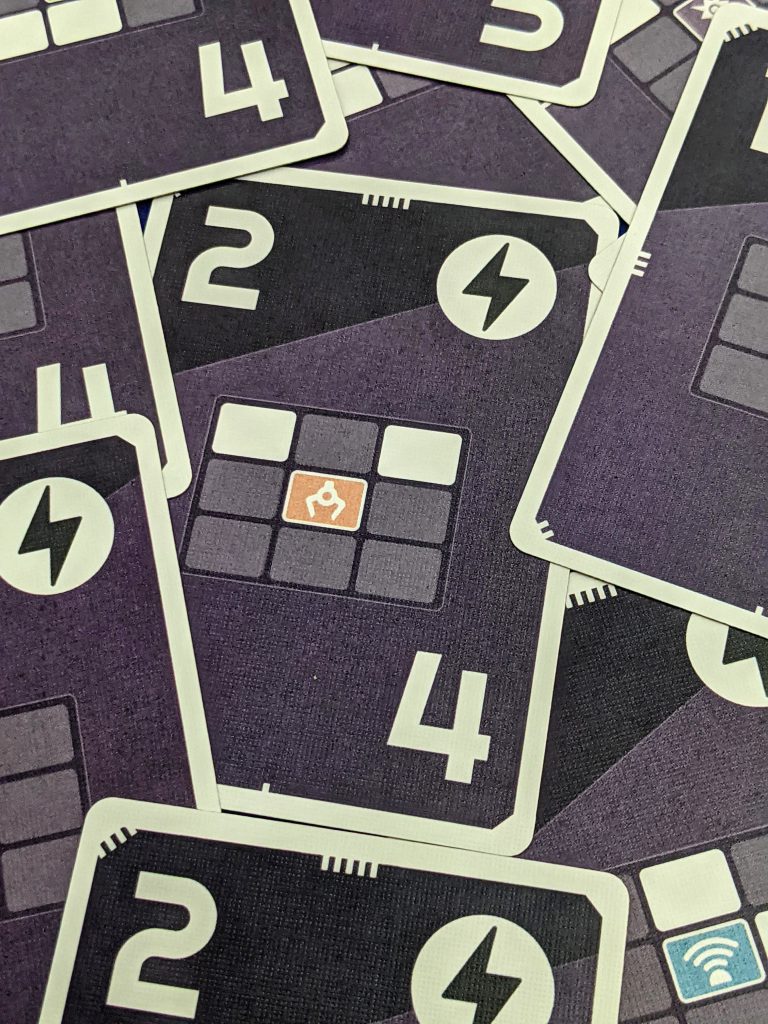 Good play is not just brute forcing modules from point A to point B. To be a ROVE grandmaster you can’t only think about the move in front of you, but multiple moves ahead. You want to set yourself up for C and D, and plan for X, Y, and Z down the road. And you have so much raw material of perfect information each game to do just that. With six special module powers you can time interrupts to supersize moves. With patterns on move cards that unlock higher movement values, you want to consider not just where the module cards start, but where they finish to unlock those precious bonus movement points. And because the movement card deck is double sided you always see the next mission card you have to tackle after you complete the current mission.

Like chess, ROVE is a spatial puzzle, but (like chess) it’s also a programming game. If galaxy brain Basic is your love language – stringing a series of commands together in flawless order for maximum impact – you may excel at ROVE.

18-card games is Button Shy’s ethos, and their games generally play bigger than their 18-card footprint. Rove is no exception, but it may be one of the most elegant designs in Button Shy’s collection. The iconography is clear and uncluttered. Module cards have the Nostromo’s interior decorator touch, and colors and symbols on each are unique (meaning ROVE is a color blind-friendly design). Movement cards are equally smart and clean and even include pips along the edges so you can use them to track your movement each turn.

ROVE exercised my cognition with each subsequent play. Bit by bit I got better at stringing together the commands, and learning the workflow. I would quietly work the problem, sometimes sliding a card here and here and here, keeping my thumb on the page where my choices forked, in case I had to undo my tentative plan due to a dead end or discovering a better way. And sometimes I had to undo, undo, undo, and start again. And it was fun to tease the answer out of the cards on the table.

What surprised me more than finally beating ROVE on my fifth try was that playing it was so meditative. Soothing. I spent my lunchtimes with ROVE, carefully looking at the module cards on the table and movement cards in my hand, hoping to uncover the one best way I could take each turn. Knowing it existed, like buried treasure, and that I just had to be patient until I could dig it up. Each game is a series of mini puzzles like nesting dolls, where your choices ripple and bleed into each subsequent mission for better or for worse. And with every efficient combo and completed mission, you’re given a warm endorphin boost. 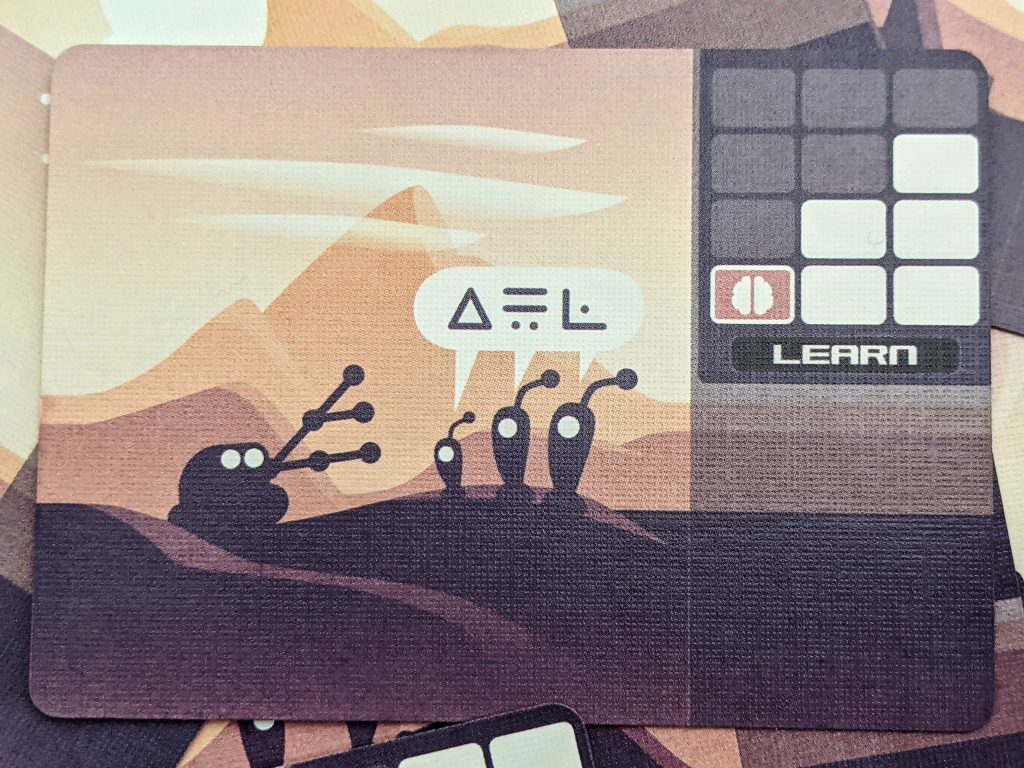 I was never interested (aka that good) in chess (or coding). I never had the brain for either. I’m not naturally fluent in cause and effect. I don’t see logic as logical. Or fun. So you’d think that ROVE would have made me itchy. But I love it. And while I still may not gravitate towards the abstract, ROVE rewrote the existing narrative and preconceived notions I had about solo games, spatial puzzlers, and even chess. ROVE is the rare abstract game that makes logic thrilling, exciting, playful, and triumphant.