Although we love Warhammer 40,000, the game’s complexity can be daunting, particularly for newer players. In Ruleshammer, we look at the nuances of the game’s rules and how they affect gameplay, clearing up potential issues and helping make sense of some of the game’s less common interactions. In today’s Ruleshammer, Rob “Vre’kais” Chilton is answering some questions that have come up over the last two weeks.

Every month (more or less) I’ll be taking comments from Reddit, Facebook, strangers I meet in the street and compiling some of the important ones into a Q&A post. I’ll also be including with each of these (and occasional other articles) some diagrams and guides covered by previous, or maybe even future Ruleshammer Articles in a hopefully concise and printable/tablet friendly format. I’m still taking questions here and I do try to answer as many as I can. 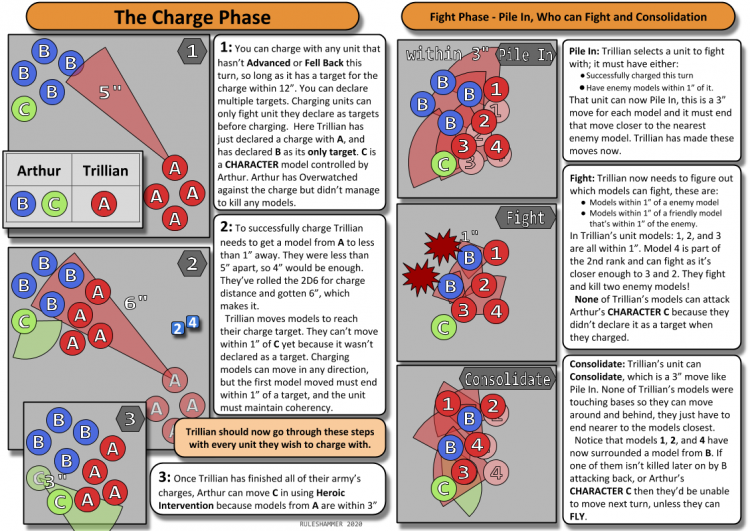 Your Questions and Answers

Q: When a Space Marine drop pod comes in and deploys its units on the table, do units and abilities that target units when they are set up outside of the deployment phase have to target the drop pod itself or can they target the marines that came out of the pod?

Unfortunately you can only target the drop pod, here’s the relevant FAQ excerpt:

Q. Some rules – such as Early Warning Override in Codex: T’au Empire, the Ever Vigilant Stratagem in Codex: Adeptus Custodes, and the Auspex Scan Stratagem in Codex: Space Marines – allow units to shoot at enemy units that have just arrived on the battlefield as reinforcements, as if it were the Shooting phase.

Q2. If the unit arriving as reinforcements has another unit embarked inside it which must disembark after it has been set up (such as units embarked within a Drop Pod, or a Tyrannocyte), can the firing unit shoot at the unit as it disembarks.

A: No – though the unit can shoot at the Drop Pod/ Tyrannocyte before the units inside disembark. [Core Rules FAQ pg11]

Does seem a bit harsh… Drop Pods are a weird hybrid of deep strike and transport. As the units coming out do count as Reinforcements (they can’t move other than to charge in the turn they arrive) but are considered to have disembarked for the “shoot at things arriving rules”. To elaborate further, this edge is blurred even further for other factions: Units leaving Necron Monoliths and Night Scythes specifically count as having disembarked, but not as reinforcements.

Set up the unit so that it is wholly within 3″ of this model and more than 1″ from any enemy models; the unit that has just been set up counts as having disembarked from a transport for all rules purposes. [Necron Codex FAQ Pg1]

So despite not being a transport, the Monolith can contain models and they disembark as normal. However they can’t disembark models the turn they arrive because models have to do this before the Monolith moves, and deploying from wherever it was to the battlefield counts as moving.

Q: The only thing I am still wondering is if units with fly consolidating/piling in can do so according to fly rules or not, like can it go over its own models if needed?

The original wording of FLY was this;

If the datasheet for a model says it can Fly, it can move across models and terrain as if they were not there. [Core Rules Pg3]

However the FAQs have changed it to this;

This limits FLY to only ignoring models in the way during the Movement and Charge Phases. Pile-in and Consolidate both take place in the Fight Phase, so FLY doesn’t allow units to jump over models when they perform these moves.

Q: I’ve seen on the internet once or twice that, in pile in / consolidate, only the first model you move must end closer to the nearest enemy. Have you heard that? Did it get changed, or were these folks mistaken?

I think perhaps there’s some confusion or merger between Pile-in and the Charge Move. The Charge Move rules say;

so the first model you move for the charge must end within 1″, but the rest of the models can move their charge distance in any direction so long as;

Q: I hate that an Imperial Knight can’t charge a model on the first floor of the ruins, despite wildly towering over the enemy. 🙁 I haven’t been playing that wrong, have I?

Unfortunately as the rules stand, no they can not… I suffer the same thing with my Trygons. However Knights do have a stratagem to fight models in a ruin:

Use this Stratagem in your Charge phase. Choose a TITANIC IMPERIAL KNIGHTS model from your army that has not yet charged, then choose one enemy unit that is entirely on ruins or a Sector Mechanicus structure (and none of its models are on the ground floor) as the target of its charge. If your model can end its charge move within 2″ horizontally and 6″ vertically of that enemy unit, the charge is successful and you can make close combat attacks against it in the ensuing Fight phase (all hit rolls made using titanic feet automatically fail). If you cannot end your charge move within the above mentioned distances, the charge fails.

Absolutely no idea why it can’t be used against units with models on the ground floor though, it’s got legs! Honestly these issues are some real weak points in the rules currently and have been for a while.

Q: if you declared two units in the charge but after killing 1, the other target is greater then 4” away so your consolidation ends outside 1”. If you use a fight again strat, you get to pile in and consolidate as you made a successful charge that turn. Can you fight something with fight again strat that you are not within 1” of at the beginning but can be after the subsequent pile in.

Yes, so long as these conditions are met:

This scenario would be quite a rare occurrence though, to declare the unit as a charge target it’d have had to be within 12″ during the charge phase. 2D6″+ 3″ + 3″ would usually mean you can always end up within 1″ of the second target after killing the first.

Also be aware than both Pile In and Consolidate are towards the nearest model for each model you move, that nearest model might not be the target unit. This flowchart should help determine who you can fight. 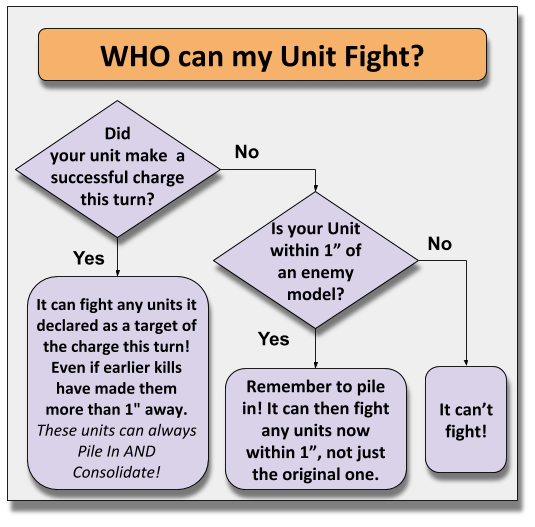 So this post caused some lively debate both on Facebook and Reddit, specifically regarding the section about Overheating weapons shot at targets that have died before they were resolved, so I’ve looked into this further. What I found further supports that you do need to roll for these weapons but also that players should be choosing which profile is being fired when declaring targets for each weapon. So what backs this up? Well firstly this section of core rules, from the Choose Targets section of Page 5;

In order to target an enemy unit, a model from that unit must be within the Range of the weapon being used (as listed on its profile) and be visible to the shooting model.

To do this, you need to know not just the weapon’s name but it’s range, which you get from picking a profile to use. Sure some weapons with multiple profiles all have the same range, but plenty of them don’t and if you need to pick a profile for them then it stands to reason you do for the rest. This is further backed up changes to how the wording for these weapons has changed in later codexes. For instance compare the original Space Marine Plasma Cannon;

When attacking with this weapon, choose one of the profiles below.

Which arguably does have some ambiguity about when that decision is made, and could be the “resolve attacks” stage of the shooting sequence. However the more recent wording in Codex Space Marines 2019 for Plasma Cannons clears that up;

When you choose this weapon to shoot with, select one of the profiles below.

This clears up that ambiguity and brings everything back in line, clarifying that players should decide which profile to use when choosing that weapon to declare targets for.


There are still lots of questions for me to work through, so I am sorry if your’s isn’t here yet, it might be something I plan to cover in a future article though. I hope this clears up some of the finer detail I missed from previous posts! As ever there’s more discussion on this and all other Ruleshammer articles here. Or drop us a note in the comments below or email us at contact@goonhammer.com.