Ruleshammer: When Do You Roll Attacks One at a Time and What Happens When Your Target Dies?

Although we love Warhammer 40,000, the game’s complexity can be daunting, particularly for newer players. In Ruleshammer, we look at the nuances of the game’s rules and how they affect gameplay, clearing up potential issues and helping make sense of some of the game’s less common interactions. In today’s Ruleshammer, Rob “Vre’kais” Chilton is looking at when you roll attacks one at a time and what happens when you do.

Although the main focus of most players is on “fast rolling” dice, and resolving multiple things at the same time, sometimes in Warhammer 40,000 you have to slow things down and roll attacks one at a time. In these cases, it’s helpful to know:

First off, the short answer to that second question is “Yes,” and in this post I’ll be talking about why that matters and more

When Does Resolving Attacks One-at-a-Time Matter?

This one almost every player I’ve faced does correctly, often because it’s perceived to be in your opponents interest for these dice to be slow rolled; which arguably it is.

Some example, below are the dice rolled for damage from 5 successful Las Cannon shots that have punched through the armour of a squad of 6 Space Marine Primaris Aggressors, where each model has 3 wounds. 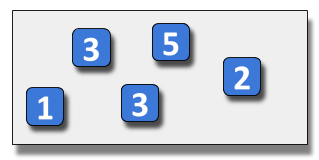 If you throw all five of the damage dice at once, who decides which dice go on which model? The rules are actually for once fairly clear on this: You can’t throw them all at once. You have to “slow roll” each of them in turn to be sure of the result. You don’t need to slow roll the entire attack sequence because up until now there’s not been any difference between the two. Here’s an example of how different the results can be, depending on the sequencing: 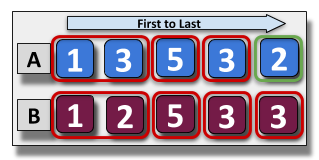 This won’t matter every time you have to roll for damage, but it’s important to note that if it isn’t clear that a result might be affected by slow rolling, then do so. Note that this will also be important for models that only have a single wound, but have a way to ignore damage, such as Plague Marines with their Disgustingly Resilient ability to ignore incoming damage on a 5+.

The only example I’m aware of for this is the Tau Cyclic Ion Blasters;

If you roll one or more hit rolls of 1, the bearer’s unit suffers a mortal wound after all of this weapon’s shots have been resolved. [Tau Empire FAQ v1,4, Pg. 1]

Each time you fire one, if you the results include one or more hit rolls of 1, the bearer’s unit suffers a mortal wound. For example let’s say we have a Tau Commander with 3 Cyclic Ion Blasters (their fourth slot filled with war-gear) and we roll their dice together; 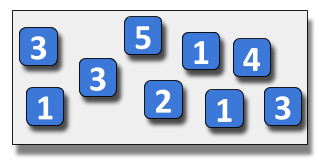 Again if they roll all the dice at once for the 9 overcharged attacks we don’t know if all three weapons rolled a 1 or if one of the weapons managed to roll three 1s. To know for sure, the controlling player should roll for each gun separately. 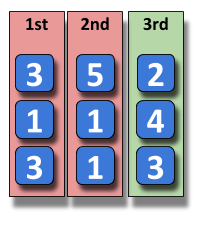 As it turns out with these results the Commander would take two mortal wounds, assuming of course that they didn’t have some way to re-roll the 1s or modify them to be above one (as the ability does not specify unmodified).

We covered in a previous article that cover can be gained during a shooting attack; in this situation though you could still “fast roll” the hits and the wounds, it’s only the saves that need to be rolled in groups until all the models not in cover are removed. The rest of the unit would then get to roll their saves with the cover bonus.

Attacks that change mid shooting/fighting – sometimes (actually, a lot of the time)

Some attacks will have special rules such as “on wound rolls of 6+, increase the AP of this attack by 1.” These attacks have an interesting interaction with Tau Drones. I’m still looking into if any other “bodyguard” abilities are similar, but so far Cogitated Martyrdom is the closest but in a slightly different way.

Regarding the Drones though, if a unit of Genestealers charges and attacks a Tau Broadside that has some Shield drones nearby, I think following the exact wording of the rules you would need to roll every Genestealer attack one at a time. Here’s why: Because attacks are meant to be slow rolled, the Tau player arguably shouldn’t know ahead of time how many AP-4 wounds are coming their way. In this case fast rolling effectively gives the Tau player advanced knowledge (without any sacrifices to the warp too, the cheek of it). Slow rolling each attack would cause them to need to decide after each individual attack whether or not to attempt to pass the wound off to a drone using the Saviour Protocols rule, now that they know the AP, or save the drone in case a higher AP wound comes later. There might be other bodyguard abilities that are similarly affected, however most of the others happen when a model “loses a wound” after the save, not at the “is wounded” stage, as occurs with Saviour Protocols.

I will probably dedicate a whole future post to the ridiculous level that the word “wound” is overused in the rules.

The three I’m most aware of (not I’ll pretend I’ve checked every codex) are all triggered on losing a wound. Cogigated Martyrdom however can intercept multiple wounds so it’s possible that slow rolling damage against a model protect by it could force your opponent to make some decisions on when to use it.

I’d like to make a note about this section and the issue of “precognition”: I wrote about it thinking it wasn’t something that would actually come up too often, but it turns out that it might, and it would seriously slow the game down. Others also pointed out that technically you need to decide with each roll if you’re going to use the Command Re-roll stratagem, before moving on to the next roll. This would fundamentally mean you need to slow roll every dice til you use the re-roll that phase. This is clearly insane. So I want to point out another rule: “The Most Important Rule” [Core Rules 40k, Pg. 6]: Sort out these situations with your opponent, and get on with the fighting!

Attacks that cause Mortal Wounds on 6+

Direct from the FAQs:

Gaining the mortal wound for wound rolls of a 6+ on weapons such as Sniper Rifles can mean you need to slow roll. It won’t always though–if you shoot them at a multi-wound, multi-model unit you should technically slow roll for each weapon’s wound and damage so that you assign the mortal wound to the correct attack. When these weapons target characters (who are usually just a single model), or units of models with only one wound then you can fast roll all of the shots as normal because the Mortal wounds will spill over to the rest of the unit.

Tau Markerlights and other abilities that buff a unit after a model from a Unit hits, wounds, kills etc.

This one is possibly specific entirely to Tau but if a unit with multiple Markerlights is firing at a target that has not been hit by a Markerlight yet, they can/should slow roll their hits until they get their first Markerlight token. Having 1 Marker Light on the target allows the unit to re-roll 1s from then on.

When a unit is hit by a markerlight, place a counter next to it for the remainder of the phase.

This distinction I want to make clear though is that Markerlight specifically place a token when a model armed with one hits. If the ability is worded that the buff applies when a unit does something it will vary based on the specific wording. Feel free to use the Ask A Question form to let me know about specific rules I can check.

My target has died, do I keep shooting?

Compared to the section above this will be nice and short, this doesn’t come up every game but for players like me who occasionally have lots of one shot weapons to keep track of, I think it’s important to note both when using them and when facing them.

The issue here is that it’s declaring the one shot weapon at a target that uses them up, if that weapon is an imperial hunter killer or a Tau seeker missile it’s still the same. When you chose targets for all the weapons on the model and decide to fire the one shot weapon, it’s used up from then on, even if you roll the other weapons on your model first at the same target and manage to kill it before rolling for your one shot weapon. It’s not something that will happen every game, but it can easily be forgotten. I personally fire mine first, just so that they don’t feel wasted, which is obviously ridiculous but I do it anyway.

Why do you need to keep rolling these? Lets check the rules for attacks first:

Choose Ranged Weapon The weapons a model has are listed on its datasheet. If a model has several weapons, it can shoot all of them at the same target, or it can shoot each at a different enemy unit. Similarly, if a unit contains more than one model, they can shoot at the same, or different targets as you choose. In either case, at the same time that you choose targets for the shooting unit’s attacks, you must declare how you will split the shooting unit’s shots; then resolve all the shots against one target before moving on to the next. [Last Sentence of this rule was changed: Core Rules FAQ, Pg. 1]

These rules make it fairly clear that ALL attacks should be resolved before you move on. For most shooting attacks this is just resolved as usual, a squad of five models with Plasma rifles will usually all be rolled together and I think most players would not approve of a player rolling them one at a time until their target has died, in my opinion the rules don’t even allow this as an option.

Therefore If you declare you’re going to shoot a weapon using it’s overcharged profile at a target, and the target dies to other weapons the unit or models has beforehand. You still need to roll the hit rolls for the other weapons.

For instance if you have a Leman Russ with two Plasma Cannons, and Battle Cannon and declared that both Plasma Cannons would overcharge and target the same target as the Battle Cannon. Even if you decide to resolve the Battlecannon first and get lucky with the two rounds of firing due to Grinding Advance and kill the target. You should still make hit rolls for the Plasma Cannons to see if they cause any overheating damage to the vehicle, even though their target has been removed, otherwise you haven’t actually resolved all of that units attacks before moving on as instructed in the shooting phase rules.

I hope this has helped to clear up some of the most common slow rolling quirks, maybe it’s just made you think of even more questions. I’m always after more rules issues for future posts or Q&As, you can submit them here, you can join the discussions on Reddit here, or you can drop us a note in the comments below or email us at contact@goonhammer.com.