Your Warlord Sucks Hot Take Round Table: Ragnar vs. Ghazghkull 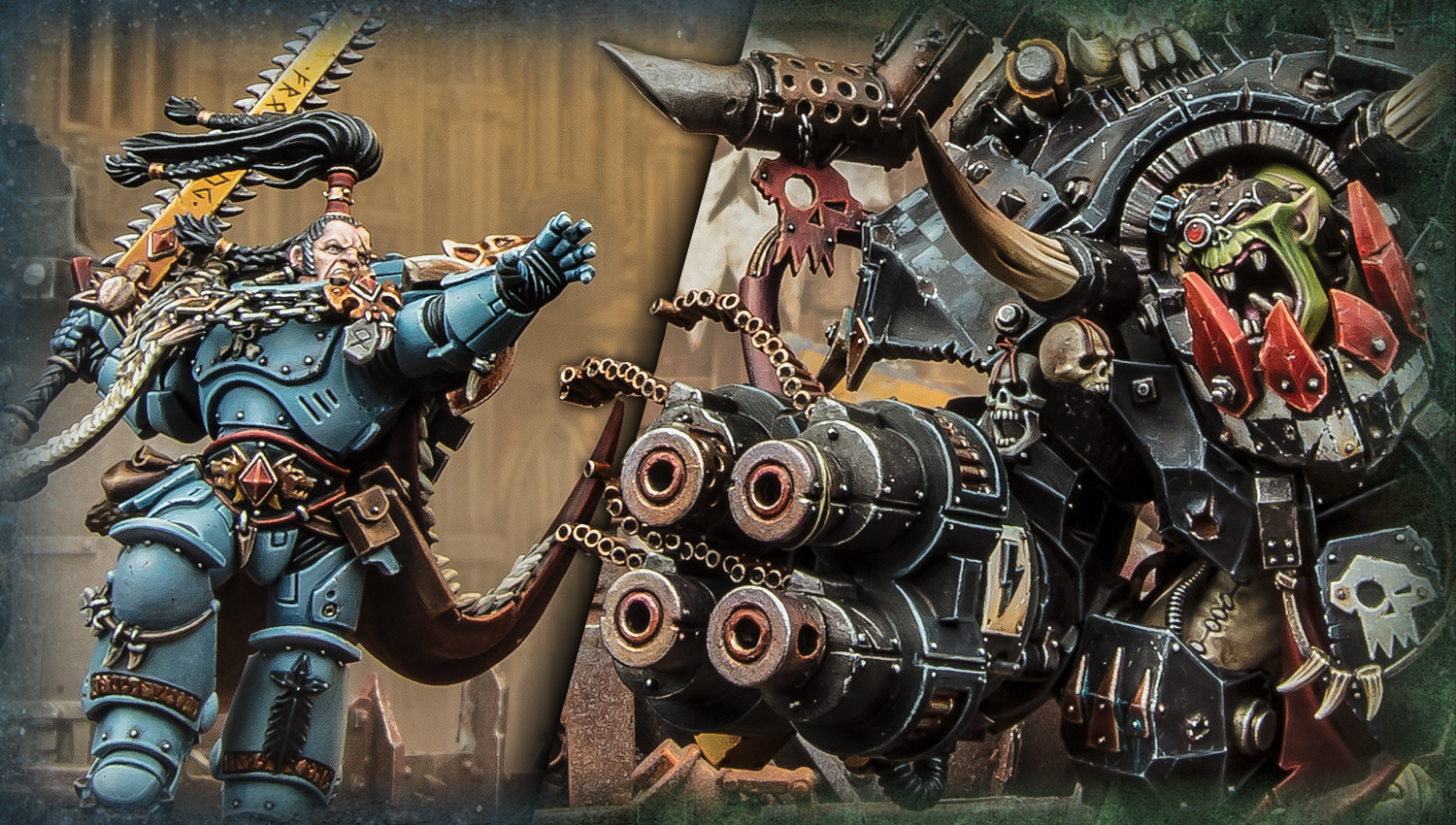 In Goonhammer Hot Takes, we do quick-pass reviews and reactions to new releases, rules, and events. In today’s Hot Take, Goonhammer’s worst and dumbest authors are covering the latest Space Marine to be Primaris-ified, known idiot and Space Wolf (but we repeat ourselves) Ragnar Blackmane, and the literally brainless but somehow less stupid Ghazghkull Thraka.

ANAmal.net: They kept his little claw-foot booties! Sword looks the same, he still has the WWE championship belt, and pretty much the same number of wolf accessories. Part of me is legit pissed that they didn’t keep the 2D clampack pose of the old model, but this will do, I guess.

TheChirurgeon: The claw booties are choice. Also RIP the oldest model in the GW range. This is a huge improvement, but I’d be lying if I said I wasn’t gonna miss having the old flat model that I first saw on the inside cover of the 2nd edition Warhammer 40k rulebook around.

SD47: I really wish Ragnar could be easily modeled drop kicking with those crampons. I choose to believe the sword is just for show.

TheChirurgeon: The moment I learned there was going to be a new Primaris Ragnar model, my literal first thought was “I wonder what he’s going to be jumping off of?”

ANAmal.net: Shocker, another Games Workshop hero model leaping off of rubble. I like to imagine this one is part of a dog shelter that the Orks smashed up, and old Rags is ready to murder any feral mutt the greenskins somehow missed.

TheChirurgeon: I don’t know how many of these it will take before we drop into full self-parody as characters who have no business leaping, somersaulting, or even hopping are depicted mid pole-vault with only a single 2mm plastic contact point between them and the lovingly-sculpted broken Celestine feet sticking out of the ground beneath them.

ANAmal.net: I want to model the base with that piece of debris laying flat, but leave him attached the same, so he’s tilted 30 degrees off vertical and sliding across the battlefield like the lube guy from Watchmen.

Jack: I assume that Space Marines have come up with Rogaine 40,000 to deal with all the chainsword haircuts he gives himself in combat.

ANAmal.net: The amount of drip hanging off of this goober, right next to his enormous chainsaw sword, has me wondering if Ghazghkull actually did beat him up, or if he just got tangled up in himself like a roomba running over a headphone cord, and made up the story to save face.

Jack: It probably involved his cape.

ANAmal.net: We haven’t seen rules for him, but with that sword and Insane Bravado I assume he’s basically a Blend-Tec that can manhandle anything smaller than a Helverin.

SD47: I am thinking he probably has the Ludacris Braggadocio rule.

ANAmal.net: It’ll be further upgraded to Ridiculous Trash Talk next time they get a book, before reaching its final form in Hush, Sumbitch sometime around 12th edition, a rule where any unit that charges, or is charged by, Ragnar, is simply removed from the table.

TheChirurgeon: When 9th edition inevitably gives us a new Space Wolves codex, this guy will get the Just Insane Levels of Smack rule to replace that, wherein your opponent has to roll for each model in their army to see if it even shows up to fight.

Raf: Those sideburns tell me that somewhere on Fenris is a young boy still waiting for his dad to come back from the store with those cigarettes he left to get years ago.

ANAmal.net: The first model where I can unironically say that it would be improved by adding a Catachan head. I know I say that about every model, but I actually mean it this time.

TheChirurgeon: When Lemmy Russ finally does return in the 40k lore, it’ll be because they found him in a pool hall hustling Lords of Change in the Eye of Terror. The model will be the 30k model, only wearing a white t-shirt with a rolled up pack of cigarettes in the sleeve and carrying a broke-down pool cue.

ANAmal.net: His wolves are gone, but he has two new sidekicks: a 30-rack of cheap beer and a Pontiac Fiero.

Jack: He’s perched up on that rubble like a little giant birdie.

Raf: It looks like the barrier Shrike is perched on.

TheChirurgeon: Ah, there we go. We’ve reached the moment it becomes parody. There is literally no reason for Ghaz to be perched on anything but someone couldn’t help themselves.

ANAmal.net: I honestly love that his uppermost horns are exhaust pipes.

ANAmal.net: The power boots are also extremely cool. NOTE: NOT A FOOT GUY, THESE MODELS JUST BOTH HAVE COOL SHOES OK.

TheChirurgeon: Hey so Greg is into feet.

ANAmal.net: Look left to shoot while punching, and look right to punch while shooting. It’s the duality of Ork.

Raf: Excited to see a new Primaris Lieutenant peeking out from that rubble!

TheChirurgeon: Hahaha oh shit I just noticed that. That owns. Man, Primaris Lieutenant has an incredible agent. That guy is freakin’ everywhere in Warhammer 40k.

Raf: This model rules. Everything about it is great. I like how his claw needs to have a smaller claw within it, for when you need to destroy something with more dexterity.

ANAmal.net: Four guns, two sets of klaws, and metal teeth outside of his teeth-material teeth. Incredible energy coming from this guy.

TheChirurgeon: Reminds me of that time Jack asked for dating advice and we told him that women care about teeth, so he should “get a fistful of teeth and put them in his mouth before the date so when he says ‘hello’ a bunch of teeth come spilling out so she can see how well-toothed he is.”  True next-level shit.

Raf: “In some cultures, this is a sign of wealth.”

TheChirurgeon: Yeah but teeth are falling out your mouth so it sounds like “blhfhfhrrf” and someone pouring skittles into a bowl.

ANAmal.net: Just lol if you don’t show up to every date with a pocket full of butterscotch candy and a mouth full of someone else’s teeth.

TheChirurgeon: I wouldn’t be celebrating my 10th anniversary with the missus if I didn’t believe strongly in the value of a mouthful of extra teef.

Jack: Do they need to be good teeth or can I just snag some off a brit?

ANAmal.net: Ok wait so I’m getting guff about the feet thing but you come in here and cop to being Teeth Guys, which is 100% a real thing that people can be, I’m sure, and we’re just supposed to let that go?

TheChirurgeon: look man, feet are gross. Teeth are for the cultured man about town. You find me an erudite fellow with a pocketful of teeth and a spring in his step and I’ll show you someone on the next trolley to gravytown.

ANAmal.net: I don’t even like feet! Can we go back to talking about Ghaz now?

TheChirurgeon: Greg having to defend his weird Ork foot fetishes up in here is exactly what I want from my hot takes about new minis. But FINE. We can talk about the double-Ork monster.

TheChirurgeon: I really hope when you turn this mini around, there’s just a big fuckin 8.4-liter V8 engine sticking out his back.

ANAmal.net: I hope there’s a second engine just to power the gun.

TheChirurgeon: Oh wait I just saw the back and it’s like a 2-cylinder motorcycle number. Booo

ANAmal.net: It just proves that he devoured a motorcycle to gain its power.

Jack: Ghaz clearly deserves at least a v10. But at least the tiny ass motorcycle engine will give an extra shooting attack from the noise.

Raf: If you don’t model your gun with both the smoke and the ammo belts you’re a coward.

TheChirurgeon: 100% this. I’m kind of sad they didn’t include just piles of spent rounds to put on Ghaz’s base. Or the bases of nearby minis. New basing kit idea: Spent casings. Just put a layer of glue on your model, then sprinkle a bunch of casings on it to show how close it was to Ghaz while he was murdering things.

Raf: Model Makari as a small head sticking out from a large pile of casings.

TheChirurgeon: I can tell you one thing, if Ghaz had the same agent as Primaris Lieutenant, he’d A. Have had a model done in Orktober last year, and B. He wouldn’t have gotten murdered by Ragnar. He’d have had one of those contracts like the Rock and Vin Diesel had in Fast and the Furious where they aren’t allowed to lose a fight and everytime one of them gets thrown through a wall, they get to throw the other guy through a wall.

ANAmal.net: I imagine Makari and whoever Ragnar’s sidekick is, some dog I guess, are sitting on the sideline keeping score exactly like that.

That wraps up our extremely useful and well-considered Hot Take, which I’m sure you enjoyed reading and didn’t make you cancel your Patreon pledge or start planning to DDoS our awful website. As always, if you have any questions or feedback, drop us a note in the comments below or email us at contact@goonhammer.com.

Previous articleRuleshammer: When Do You Roll Attacks One at a Time and What Happens When Your Target Dies?
Next articleThe Fabricator General: What to Do When the Emperor Doesn’t Provide, Part 3
Share
Facebook
Twitter
ReddIt