Ruleshammer: Movement and Shooting Phases in Age of Sigmar 3.0

The new edition of Age of Sigmar is here and we’re doing daily deep dives into the ways the edition’s rules have changed and what those changes mean for players. Today we’ll be looking at how the Movement and Shooting phases have changed in 3rd edition – discussing the new types of movement actions and reactive command abilities you have in your arsenal to outplay your foes.

The movement phase is where a lot of the action happens. While maybe not as flashy as throwing lots of dice in the shooting phase or micromanaging melee combat during pile-ins it’s where you set up your charges, secure objectives and move into the best position to fire your guns. In the 3rd edition of Age of Sigmar, movement still works pretty much the same in the broad scale but when you look at a lot of the nuance you have a lot more options for movement than you did in the past.

During the movement phase you get to move every one of your units, if you so choose. If you choose not to activate a unit, it counts as not moving, which some units like the new Man-Skewer Boltboyz benefit from.

You have three distinct types of movement, which you declare before moving a unit. For all 3 you cannot end a move within 3″ of an enemy unit, that’s what the charge phase is for! 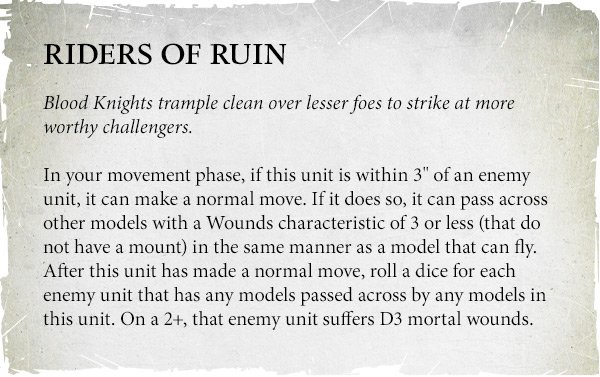 Since it says you can make a normal move despite being within 3″, making it clear that a retreat and normal move are different actions is a huge clarifier. Now, onto some more exciting stuff.

There is a set of generic command abilities in the movement phase to spice things up, one returning and one brand new.

Redeploy is what’s going to get a lot of people talking. It can get a bit dodgy, like running you might get a 1 and not be able to do much but the ability to immediately react to an opponent’s move has some serious repercussions on the game. What sorts of things could you do?

There’s a lot of exciting ways this could be used with a lot of clever thought, it almost seems a little too good. It could still fail you but the risk could be worth it.

You won’t always be simply moving across an open field. Terrain can get in your way and really gum up the works. If you need to climb up a wall, or over a small fence measure vertically along the wall and include it in your movement. If you don’t have enough movement to make it you’ll just have to walk around it.

That is unless a unit can fly! On some warscrolls you’ll see mention that a unit can fly, if so they ignore terrain when moving, allowing them to gracefully move over obstacles in their way. If you want to move on top of something and stay there you will need to measure diagonally from where they are to where they want to go. With some terrain this can be a bit hard to do but work with your opponent to find a way that’s most fair.

Probably the most controversial rule change in 3.0, coherency. Regardless of how you move a unit you must make sure a unit ends its turn in coherency. To count as Coherent, every model in your unit must be within 1″ horizontally or 6″ vertically of another model in the unit. If the unit has over 5 models, you must be within 1″ horizontally or 6″ vertically of two models in the unit. In the movement phase this is generally easy to figure out, you can create at least 2 ranks and everyone’s happy. It’s in the combat phase that it starts getting a lot more messy, so we’ll come back to that when we get there.

Shooting phase, the first attack phase of the round. After getting yourself into position any of your units with Missile Weapons that didn’t Run or Retreat that round can fire away at enemy units in range. Attacking at range and melee is at its core the same practice just how far away you are. Let’s use the Billowing Warpflame on the Exalted Flamer of Tzeentch so we have an example in front of us

So the numbers are pretty straight forward, you pretty much can just read left to right to understand how an attack works.

There are a lot of things that can modify any of these rolls. From spells, to command abilities, to army battle traits and even something simple as cover, so it’s not always going to be that easy. Always add up all the modifiers and if you have a number higher than +1 or lower than -1 to a dice roll then reduce the modifier to +1 to -1. Except for saves, those can only ever get +1 but can go as low as you want (otherwise rend has no value).

There’s one special rule for the shooting phase we should acknowledge as it’s unique to this phase. Look Out Sir! helps protect your Heroes from harm. Often, the Heroes are the most important part of an army and being shot off the board turn 1 hurts. If a Hero is within 3″ of another friendly unit with 3 or more models, then the shooter has -1 to hit the Hero. Unless a Hero has 10 or more wounds, Archaon is a bit of a hard target to miss after all. -1 alone isn’t always going to save them so don’t rely on this alone, but keep bodyguards with your Heroes!

There are two command abilities available to any army in the shooting and combat phase. The Combat phase has a lot more nuance so we’ll introduce these here. All-out Attack and All-out Defence are mirror versions of each other. You can activate either one when a unit is chosen to fight in the command phase either as the attacker or the target before rolling any dice. All-out attack gives a +1 to hit, while Defence gives a +1 to saves. Simple, sweet and could save your life.

Much of the movement and shooting phase hasn’t changed all that much in Age of Sigmar 3.0. It’s very familiar to those who’ve played previous editions but grants a lot more reaction and give and take to the game to keep interest going. Other than some weird hiccups with Coherency they didn’t break what didn’t need fixing. Tomorrow we’ll look at the charge and combat phases!