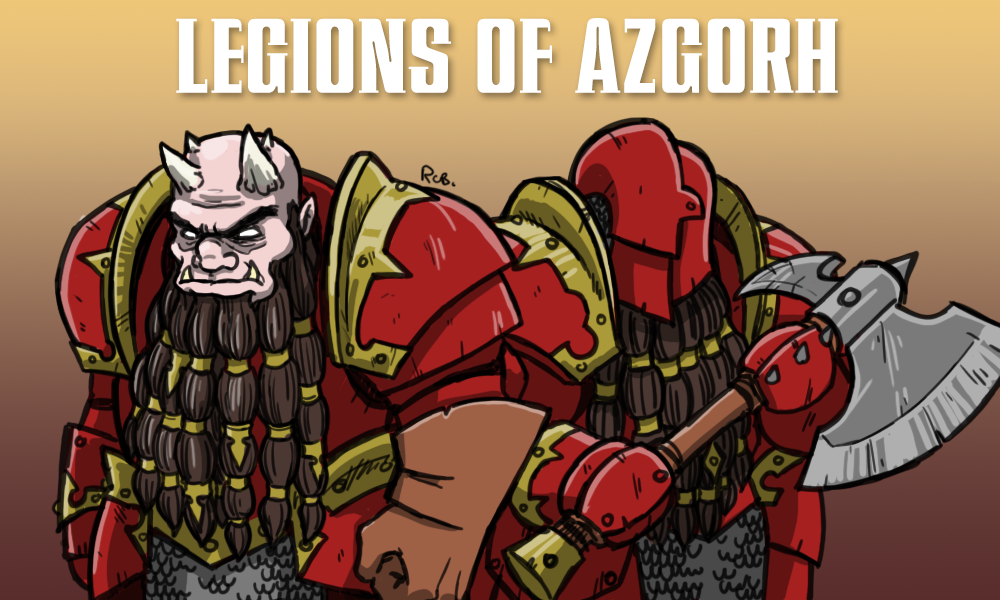 Do you have more money than sense and a penchant for stubby resin Dwarves? Then this is most definitely the army for you! 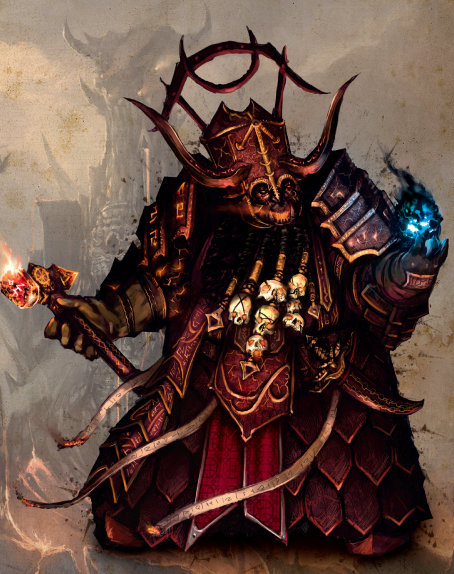 The Chaos Dwarves were a very beloved but unsupported army from Warhammer Fantasy, relying on out of print metal models and ancient army books, yet you would still occasionally see a Chaos Dwarf player at a tournament pushing around their wobbly metal models which never quite stayed together. They were like a Fantasy version of Sisters of Battle – impractical for most people, but with a small and dedicated fan base. Due to the continued interest in them in spite of their age, Forge World announced they would reinvent them as the Legion of Azgorh, with a complete range released back in Warhammer 8th edition. They survived the transition to Age of Sigmar, but there don’t seem to be any plans to do more with them right now. As such they are only available from Forge World in resin form and have no real in print battletome you can purchase. They are still a legal army in Age of Sigmar though, and still get played with. Their aesthetic has shifted away from the comically large hats and moustaches to a darker look with their troops having masks permanently attached to their faces.

You can have fun and possibly do well with practise, but will be hard pressed to be win tournaments with the Legion. If you do though, you’ll be an instant celebrity!

13 wounds and a 4+ save and negates wounds  and bounces a mortal wound back on a 5+, making him one of the more survivable options in the army, but comes with a hefty points cost to make up for it.

He can fly and move 15″ when unwounded making him pretty mobile.

His damage dealing is fairly impressive, he does a mortal wound to enemy units within 3″ at the start of the combat phase on a 4+ per unit, he can reroll wound rolls with his mount if it charged that turn. His mount can spit 6 gouts of flame (1 damage, no rend) and attack with its horns with 2 attacks hitting and wounding on 3’s which start out at 6 damage with -2 rend but decrease when wounded, as well as its hooves. Drazhoath’s melee weapon is pretty tasty, but only hits on a 4+ and only has 1 attack a turn meaning you’re unlikely to actually land it very often, although when you do it’s wounding on a 2+ and doing 3 damage with -1 rend.

He is also a wizard who can cast and unbind 2 spells a turn and gets +1 to casting rolls if the battle is in the realm of Aqshy.

His unique spell is

His command ability is

An absolutely essential part of the army. A daemonsmith both improves your artillery through their Infernal Engineers rule (see the Artillery section) as well as being the faction’s wizards. They can cast and unbind one spell a turn, getting +1 to their unbinding rolls if they have taken a wound. They have 5 wounds apiece with a 4+ save and their weapon choices are either a Darkforged Weapon with 2 attacks doing D3 damage or a staff with a single attack doing 3 damage. They also get to throw firebombs which don’t need to roll to hit or wound and instead do D3 mortal wounds on a 2+, or D6 if the target is a Warmachine. Don’t leave home without at least one of these nasty little guys.

A very popular choice, this model is both robust with 7 wounds and a 4+ save as well as being able to dish out the hurt, with 5 attacks hitting and wounding on 3s and doing 3 damage a piece with -2 rend, as well as their 3 hoof attacks which go from 1 damage to D3 if they charged. They get +1 to their charge rolls to help this.

Their command ability is

A named Bull Centaur who gets an additional wound and the same melee profile including the hoof bonus on the charge. However his axe attacks are even nastier since they do additional mortal wounds when rolling a 6 to hit. At the start of the hero phase he also gets to pick an enemy unit within 8″ and roll a dice, on a 3-5 they take D3 mortal wounds and on a 6 they take D6.

His command ability is

In general it’s probably best to stick with the regular Bull Centaur, but this guy does go in the Execution Herd Warscroll Battalion.

A 5 wound Infernal Guard who gets a Pistol attack with the chance to do a mortal wound on a 6 and a weapon with 4 attacks dishing out 2 damage at -1 rend. He’s mainly there for his command ability though.

Their command ability is

Almost identical to the Castellan except for no pistol and no command ability. Instead he grants +1 bravery to Legion models within 18″ and lets them reroll melee wound rolls of 1 within 18″. If you’re planning on running lots of melee troops this is definitely worth it, especially with our fairly low bravery.

Infernal Guard are the rank and file of the Legion. They are traditional Dwarves who only move 4 inches, only have a single wound and a pretty decent save at 4+ (plus their Blackshard Armour). They also get to do a mortal wound to an attacker for every save of a 6+ they make so attacking them comes with a risk. Their basic weapons only have a single attack and hit on a 3, wounding on a 4 doing 1 damage with 1 rend. Their unit leader can take a pistol that probably isn’t worth it, although it can cause a mortal wound on a hit roll of a 6. This isn’t really something you can rely on, unlike the massed gunshots of the Fireglaives.

Fireglaives are the ranged version of the Infernal Guard, and in general are a much smarter choice. They have the same save while lacking the chance to reflect wounds back, but rather than the lacklustre melee of the Ironsworn they have amazing guns which have a 16″ range, hit and wound on 4s with -1 rend. They only do 1 damage each but every hit of a 6+ causes a mortal wound in addition to any damage it would have caused. They also get to reroll hits of 1 when they don’t move (making rolling 6’s even more likely). Taking these in giant blocks of 30 should put out 5 or so mortal wounds a turn, in addition to their normal damage. Definitely the best option for battleline.

Bull Centaur Renders (with Shar’Tor as the General)

5 wounds with a 4+ save isn’t that much for a 60 points per model unit. They aren’t even that fast with a movement speed of only 7. Their damage isn’t bad, putting out 3 attacks doing 2 damage with -1 rend followed by 3 hoof attacks which start at 1 damage but go to D3 damage if they make a charge. They get +1 to their charge rolls to help with that.

A long range gun that gets 3 shots, hitting on 4s and wounding on 3s doing D3 damage with -1 rend. Can fire indirectly and gets +1 to hit if shooting at a unit with 5 or more models. Infernal Engineers grants an additional shot. The range and indirect fire make it an attractive option

Has an impressively named “Dreadquake Bomb” gun. This only has 1 shot, but can be increased by rolling a dice – on a 1 or 2 the unit takes D3 mortal wounds but on a 3+ gets an additional shot. The gun itself hits on 4s and wounds on 3s. Infernal Engineers gives it +1 to hit which you really want. The damage is a hefty D6 with -2 rend and you get to reroll the dice if you’re targeting a unit with 10 or more models. It can also shoot models it doesn’t have line of sight to. When overcharged and with Infernal Engineers this is quite a scary gun.

The big boom gun of artillery, this straight up shoots Mortal Wounds, ignoring the tedious “roll to hit and wound” part of the game and just pointing at a unit within 18″ and rolling a single dice. On a 3+ (+1 to the roll if the unit has 10 or more models) the target takes that many wounds (the roll you just made). Infernal Engineers grants it an additional 6″ range. Amazing and almost an auto include.

Big flying fire Daemons! These have 4 wounds a piece with a 5+ save. They exist to utterly wreck things however, with 5 attacks and an impressive 3″ reach. They hit on 3s, wound on 4s and do D3 damage as well as doing a mortal wound to any enemies within 3″ of them at the end of the combat phase on a 2+

Their special move is that they ignore all modifiers to their saves (positive and negative) as well as being able to run and charge in the same turn. A very powerful choice and the default choice for smashing stuff in melee.

A big tractor for pushing around your warmachines. You can pick one of your artillery pieces within 1″ and use this model’s movement (starts at 10″) as long as they both finish the movement within 1″ of each other. Good for getting your Magma cannons into range!

They also come with a nasty steam cannon doing 2D6 shots and doing 1 damage with -2 rend. You can improve this by overloading the engine and choosing to take either 3D6 or 4D6 shots and taking D3 mortal wounds if the total is 12+ once all the attacks have been resolved (you probably want to be doing this especially with your Blackshard Armour being able to bounce one wound)

An Iron Daemon that someone has attached hammers to. It gets the same ability to drag an artillery piece and a similar sort of deal with its hammer attacks as the Iron Daemon gets with its steam cannon (2D6 to start but take wounds and it goes to 3D6 or 4D6). The hammers themselves do D3 damage with -1 rend and hit and wound on 3s until they take wounds, so these can absolutely blend things. The only (quite large) downside is that this model is no longer in production. You can make your own or swap a kidney for a second hand one but I’d be wary of this since scrolls with no models tend to be the first things to go to Legends status…

One of the highest profile Legion players is Rob, host of the Honest Wargamer. He gives a really good runthrough of this list on his site https://thehonestwargamer.com/aos-list-rundowns/robs-gunner-guide/

And that’s it. There’s not a ton to say about the Legion – they have a limited set of rules and they’re clearly an afterthought for AoS, which is a shame because the range is amazing. As ever, if you have have any feedback or comments, we’d love to hear from you – hit us up at contact@goonhammer.com or over on our Facebook Page.