This event took place on January 15th just one day before the new core rule changes, so, keep that in mind when looking at the lists if you’re a seasoned Legion player.

A little less than a year ago I picked up Star Wars Legion, a squad based skirmish game about…Star Wars. Here in the UK there were some great May the Fourth bundles available so strong-armed a friend into choosing an army and I chose the opposite. He went for Republic, which was not surprising, so I picked up Separatists with a LOT of droids. It then took me roughly 7 months until I actually built any of it, and painted it up fairly quickly (thank you Skeleton Horde Contrast!) before playing any games.

I’ve played maybe 8-10 games before this event, almost entirely with my Clone-loving friend above, and really enjoying it. Getting to play with characters from the films and the cartoon series has been incredible fun. Also helps that the gameplay is really smooth too; between the command cards, orders, and alternating activations every decision you make feels important and impactful. This is a solid, good, game.

Being in London there is no shortage of gaming community and saw that there was a “beginner friendly tournament” so grabbed a ticket for a day of gaming and, probably, bad Star Wars jokes. Hosted at one of my favourite gaming venues, Bad Moon Cafe, where I spend too many Sundays playing one (or more) of any assorted wargame in my collection.

Games were 800 points (standard size for Legion) and there were 3 games across the day from 10:15 until 18:00 with a short break for lunch. If you’re not familiar with Legion the deployments, missions, and conditions are actually part of list building. From the core sets of the game you get 4 of each of these cards, and that’s how many you choose in your list. You get other ones from expansion sets like Vital Assets, which, I might end up picking up now for some variation in games. Whoever has less points in their list uses their deck of cards so I built as close to 800 points on the dot as I could so I didn’t have to worry about this at all, which worked out. These 4 cards are shuffled within their own types, laid out, and going from left to right that’s the objective, deployment, and condition that you play. Each player gets to veto two cards, alternating with each other, discarding the left-most card. I actually really like how this is done, it adds another element to list building and makes the TO’s job a lot easier – don’t have to write up or decide on any deployments or missions! 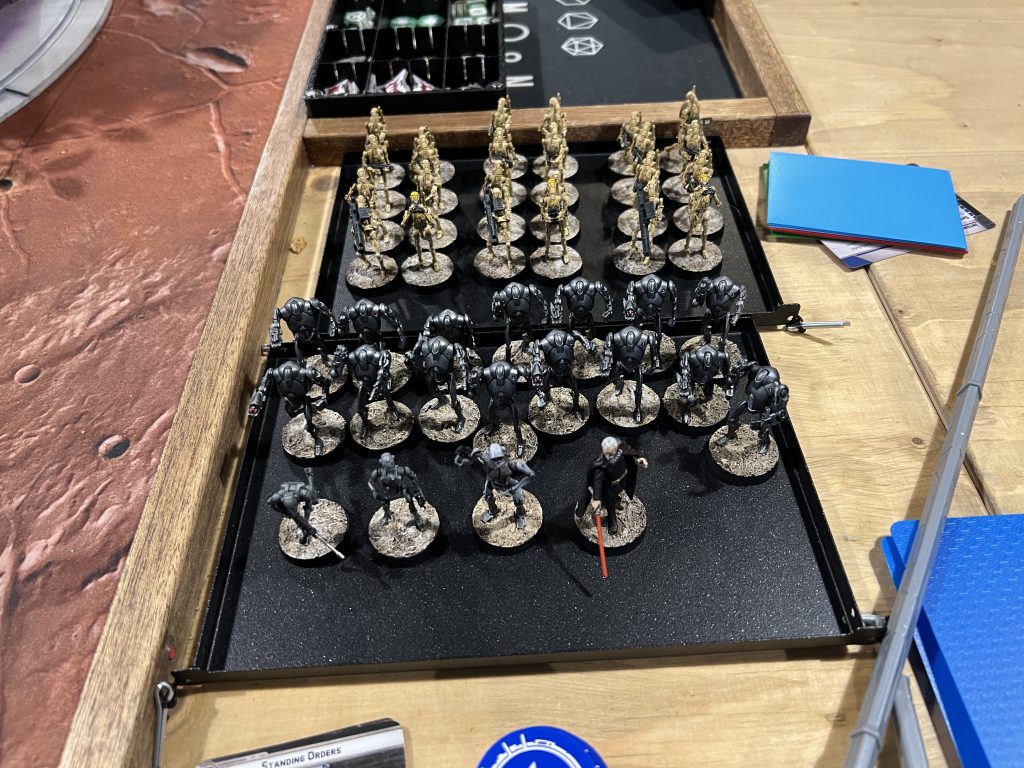 To be clear I do not think this is a particularly good list in any way. I know that B1’s are not good at killing things or staying alive. I know that B2’s are expensive and still die relatively quickly, even with Armour 1 (thanks White dice saves that don’t surge). Dooku, however, is very solid. Super Tactical Droids are solid. Command droid strike teams are…maybe ok; I didn’t have enough points for the Droidekas I wanted so I took this little sniper team. What this army IS is simple. It’s 6 Corps units, 2 Commanders, and a Special Forces unit; when pulling from the baggie of random orders there’s a pretty good chance it’s going to be a Corps unit, depending on what was ordered and/or already dead.

As part of your list you also choose a set of command cards that you get to use in game either from basic generic ones every force as access to, faction-specific ones, and then ones that are tied to Commanders and Operatives.

My second time playing against Rebels ever and was great, and very close. Objectives were on terrain that you had to have unit leaders touching by the end of the game, supply crates were around the table that units could gain little upgrades from and were set up lengthways on the table.

Dooku had a fun time being tied up in combat with 2 Rebel Veterans and Boba Fett for a couple turns, until he managed to kill Boba….to die soon after to the 2 Rebel Veterans knocking his last wound off him! Had a very, very, lucky sniper shot with my commando into a strike team holding down the back objective sitting in heavy cover rolling 2 Criticals…and subsequently killing both members of the squad.

That airspeeder was something I could and should have done a much better job of dealing with, but, you know, did not. Something about using Standby tokens on B1’s with rocket launchers probably being a decent thing to do more often. I didn’t really figure this out until game 3.

Short break for lunch. Pizza orders were taken by the staff but I opted for a wrap instead: another mistake. Chicken shawarma as a cold wrap seemed like an ok idea as a cheaper option but was….weirdly soggy. At least the iced coffee was good.

Because the first game barely finished in its allotted time I was pretty keen to get going for game 2, fortunately my opponent also didn’t mind starting before the lunch break was really over so we could take some time getting set up. The one big downside to the mission etc cards being part of list building is that this can take considerable game-time getting set up.

Another table-long deployment, this time with an objective in the middle and two more equidistant towards the long table edges. Players score end of turn 2, 4, and end of game; great to have some progressive scoring because B1 droids especially do not last until the end of the game. Clear Conditions is the boring one: it does nothing extra at all, which is fine by me at this point.

This list definitely scared me a bit, my normal opponent runs some similar units like Arc Strike Team with Echo and I know that Padme is just a token-machine to be used by the rest of the force with (usually) enough dodge tokens she’s not worth shooting at. Anakin is a combat power-house that you do not want to directly engage with if you can so help it and while Clones might not be great they’re bodies with Red dice saves to score objectives with.

I did actually manage to take out Anakin on turn 3 with Dooku and just about my entire army shooting at him, after causing a couple of wounds the turn before. Dooku then met the exact same demise a few activations later, unfortunately. At this point I’m thinking to myself that I’m playing Dooku generally a little too aggressively. Maybe I’ll learn from this and not do that in the next game.

Nail bitingly close down to the end but another loss for the Droids. Score 5-7.

A different deployment map! Yay! Nothing too special with this one, just deploying in corners of the table. Same mission as last game too, so, get onto the objectives for turns 2, 4, and the end of the game. Limited visibility was actually really nice here too. No unit could shoot over range 2 in the first turn and over range 3 in the the second turn; B2 droids only have range 1-2 guns so nothing being able to effectively shoot at me when most my shooting also isn’t happening turn 1 was wonderful! My snipers were less amused, but they made some great shots later on so that’s fine.

That centre objective? Placed in the middle of a swamp. A swamp. Which were were informed was difficult terrain and light cover for units in it. A swamp. With no other obstructions really around it. Getting to it was not easy and staying on it was even harder.

Those bikes really scared me. This Empire list had so much Impact. B2 Super Battle Droids are not fans of Impact to any extent because of their Armour. So those bikes had to go, fast, and thankfully they actually did too. I finally learned to make use of some Standby, then promptly forgot that gaining a Suppression token means losing it, so just did nothing with a unit of droids with a rocket launcher and they just lost it. I was waiting for the bikes to move in. Lesson learned (hopefully).

There was a lot of Force Pushing that went on, a lot of light saber fighting and force lightning and….I failed so so badly on Dookus’ saves. At one point with 3 wounds left, 5 saves to make, and rolled 4 blanks which just removed him way too soon. The rest of the force wasn’t really able to make up for the loss and wasn’t able to remove the last remaining model from a couple of key units which gave Empire victory in the end.

A third and final loss (for today) for the Droids, score 3-5.

All in all this was a great experience and a fun event to get the chance to go to! Big thanks to the TO’s (like Jon, my first game) for organising it. I definitely learned a lot more about Legion, which is great because I’m going to forget everything I learned while I go and play other games that I’ve got booked in for the next few weeks. BUT there’s also a small more local scene to me of Legion starting up so maybe I will get the chance to play soon!

I do also have a whole slew of evil Mandalorians waiting for paint as well, which might be the next outing…less models to have to deal with which is very much up my alley.

Walking away with 3 losses from 3 very close games feels actually pretty great, which will be a surprise to those that know me personally, probably. I promise: I lost and had fun. Really!