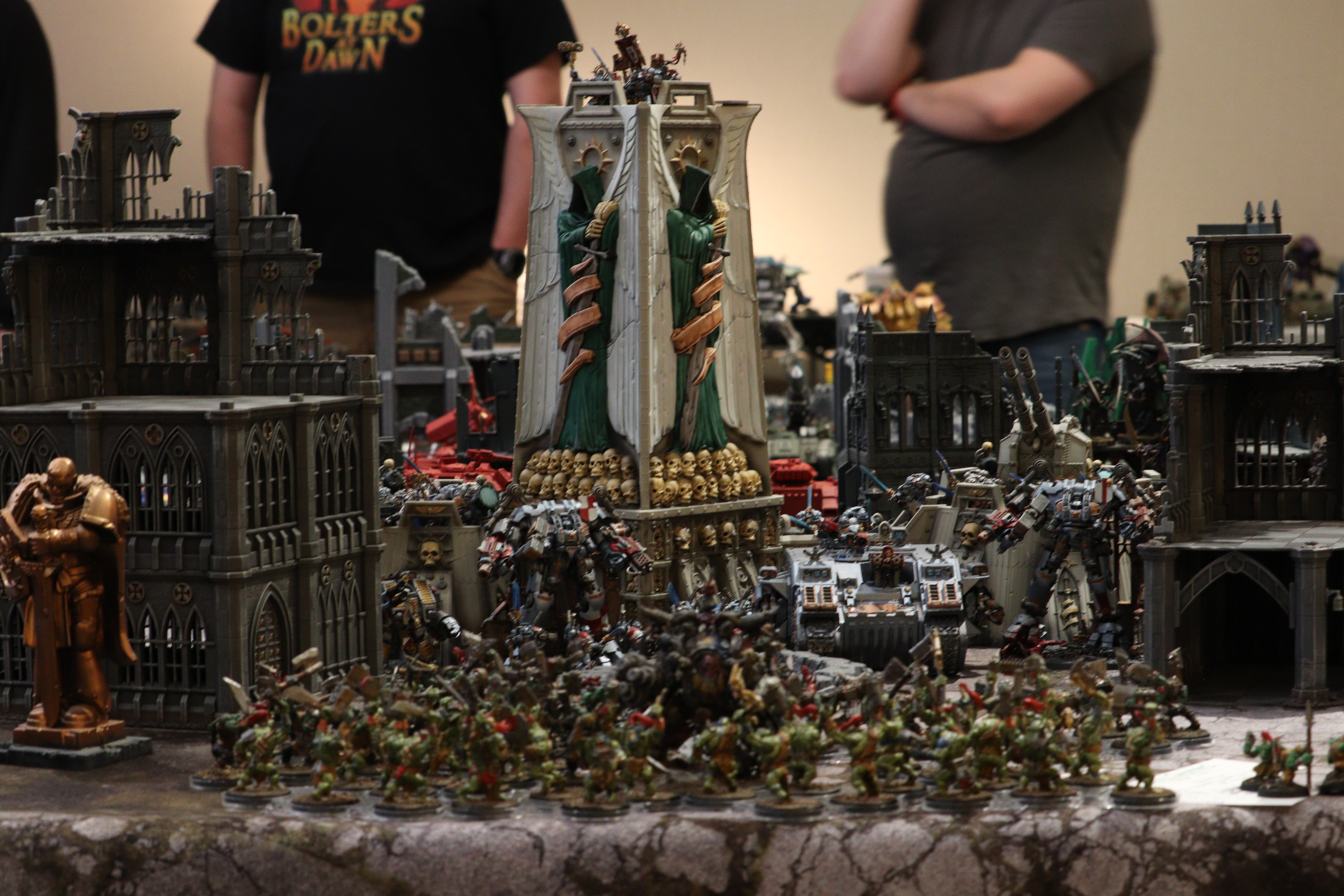 Something a little different today, a game we haven’t covered in nearly two years, and write about so rarely that we don’t even have a tag for it: Apocalypse. Everyone’s favorite way to use the most models and the fewest dice, it’s roughly as dead a game as Epic and has a higher barrier to entry than anything this side of, I dunno, what’s an expensive war game? Model trains? 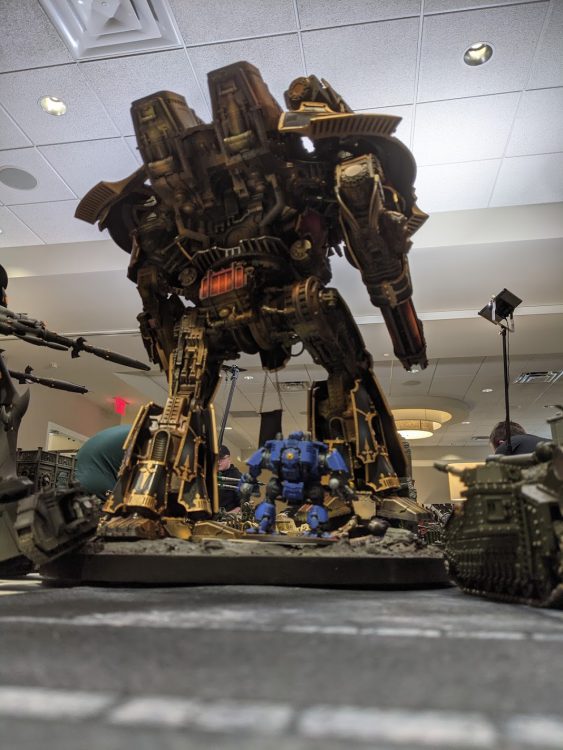 We’re here talking to normanthesquid from Fundamalleus, about their recent mondo Apocalypse mega battle. We were delighted when he reached out to us, because it’s not every day that you get to hear about an eight thousand power level ham slam going down. For the low, low, price of adding Apocalypse support to ButtScribe we got to pick his brain about organizing king-sized warhammer games, and how their group has gone about keeping Apocalypse alive when even GW couldn’t be bothered. We’ll let him talk about it in his own words, but Fundamalleus has gone beyond just keeping the memory of Apocalypse alive by continuing to play it, they’re actively maintaining it by adding rules for new units as they appear in 40k. You love to see it. 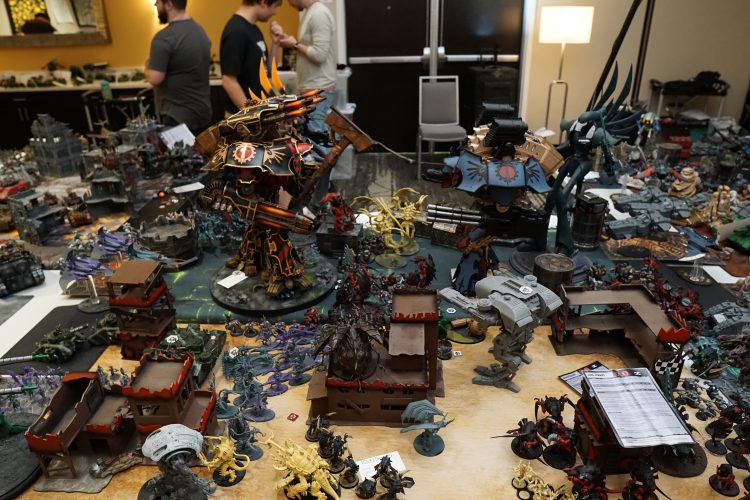 Seriously though, get a load of these models. There are multiple Warlord Titans, an Eldar Revenant, and my personal hero, some absolute champion running three Astraeuses. In addition to answering our questions, Norman was kind enough to send us a massive gallery of images. I could spend all day here and drop in a hundred photos, and I still don’t think it would be enough to do it justice. 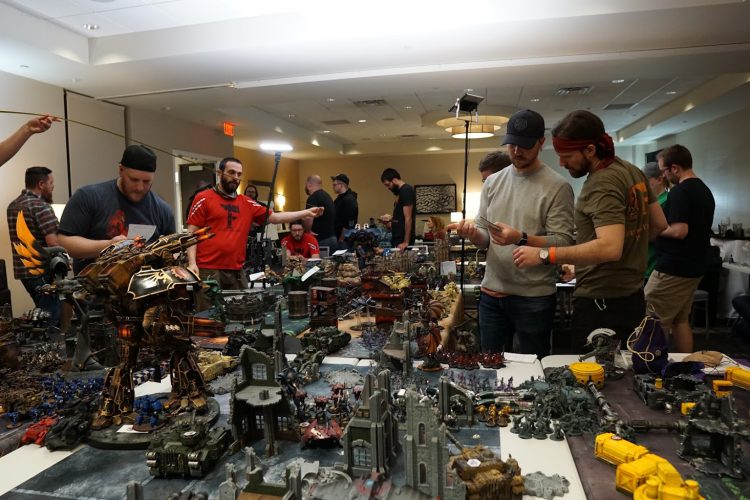 Goonhammer: First things first, why Apocalypse? It’s generally seen as a dead game, and it’s great to see someone out there that still plays, but I have to admit I was surprised by your initial messages.

Squid: We have been playing “Apocalypse” for a few years, following one narrative story. Our first game was right after 8e dropped, so we were just playing big 40k. We love the Apocalypse ruleset, especially how much faster it is with absurd amounts of PL. It’s a good system, and we have enough players to justify us keeping it alive. 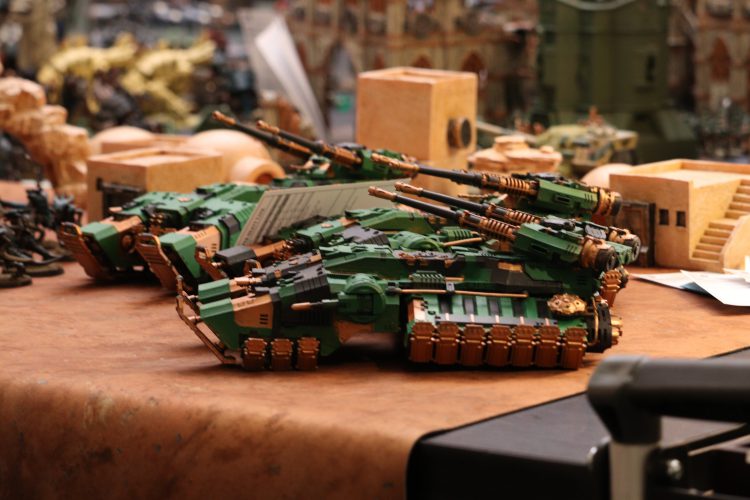 GH: Can you talk a little bit about the Fundamalleus project/gaming group?

Squid: Sure! We started out as just some people playing Warhammer in my basement. Since 40k is all about bad latin, we decided to name our group “Fundamentum Malleus”, literally and badly translated as “Basement Hammer,” haha. We play just about anything GW puts out, but we do focus mainly on 40k. We try to be really inclusive, our main rule as a group is “Don’t yuck yums” – you might hate something GW did, but if someone else loves it, just let them love it. 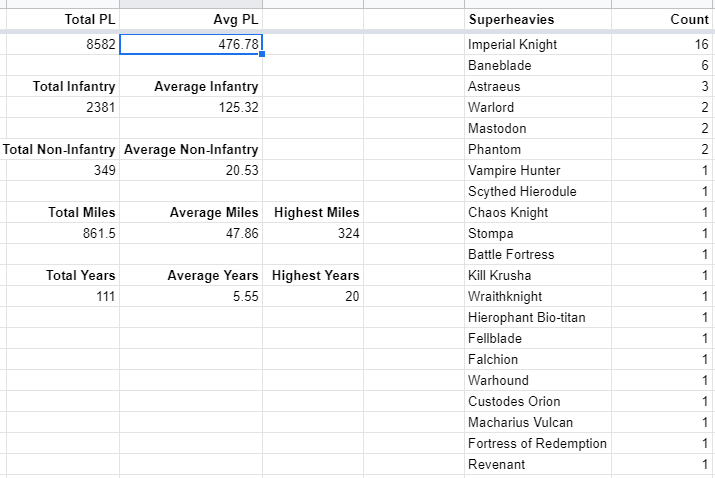 GH: I think it rules that you’ve been adding new datacards to the game. What drove you to do that, and how have you been attempting to balance the new units?

Squid: We LOVE 9th edition, and we love all the new models that have come along with it. GW has really been knocking it out of the park design-wise, and the idea of playing Apocalypse, but not being able to use these new models, just didn’t sit right with us. We first checked with GW support to see if we could even get a hint of additional support, since they had released one additional wave of datasheets that included models like the Impulsor, but once it was clear that no more Apoc support was coming, we got to work.

I’m a software developer by day, so my first plan was to build an algorithm to try to convert 9e datasheets to Apocalypse datasheets. I made a big spreadsheet where I just plugged stuff in, and tried to divine the rules that GW had used. What I discovered was that it really wasn’t gonna be that easy:

The green boxes are units and weapons that seemed to follow a pattern, but the pattern was getting very complex.

Heinzz, my main partner in all of this insanity, one day said “Dude, it’s Apoc. You are trying too hard, we just wanna see cool shit.” This comment made me realize I was focusing on the wrong thing. You asked about Balance – balance is definitely important, but Apocalypse is never going to be balanced. What it needs to be is fun, and everyone needs to feel like their models feel like what they imagine them to be.

I stopped using the spreadsheet, and just started making the datasheets by hand. Sometimes I would get stuck, and the Fundamalleus group was always ready and willing to help me think my way through a datasheet. Since balance was no longer a goal, I made transparency my new watchword – you can see all my ramblings in the Github Wiki, so if someone thinks I made a mistake, you can at least see my reasoning for it, haha.

GH: How did your mega-battle go? In terms of logistics it seems like a lot to deal with (just gathering the terrain and tables is an impressive feat by itself), but I want to live vicariously through your gaming stories. What goes into running an event like that? Did it rule? Because it looks like it ruled.

Squid: It ruled so hard, I can’t even begin to describe it, haha.

For the tables and terrain – some of that belongs to Heinzz, but the majority of it actually belongs to Bolters At Dawn, another Cincinnati Warhammer club that we have almost completely merged with. BaD is more focused on Warhammer than we are, and they are more hobby-focused than we are – they have monthly hobby goals with a tracker on their website, for instance. They were gracious enough to let us borrow the huge swath of gorgeous terrain that they’ve been putting together the last few years.

As far as running the event, my biggest tip is “Have a loud voice”. Apocalypse as a system lends itself well to huge scale games, but we have further tweaked the ruleset into what we call FUNDAMEGAPOCALYPSE. The all-caps are required after 4000 PL, haha.

FUNDAMEGAPOCALYPSE got started because at our last Apocalypse game, in November 2019, we tried to go too big without enough planning. The game bogged down, especially because we had 4 teams, so it was sometimes 20 minutes between you activating your detachments. We absolutely needed to improve it. In the end, we made 2 smallish changes that really improved the game. The simplest was to just limit it to 2 sides at all times – more teams just doesn’t scale to 8000 PL, too much waiting.

The other, bigger, change we made was to completely revamp the Command Asset deck. A lot of time was spent building decks, drawing cards, reading cards, and explaining cards. The biggest time sinks were cards that “tutored”, to borrow a term from Magic: the Gathering, and countered other cards – we just straight banned those. Then, we built what we call the “Command Asset Array” – a standard set of 9 cards that everyone has. We basically turned them into stratagems – we added Command Points back into the game, and each Command Asset now costs 1 CP to play. No more hands, card drawing, thinking about what cards to keep, etc. 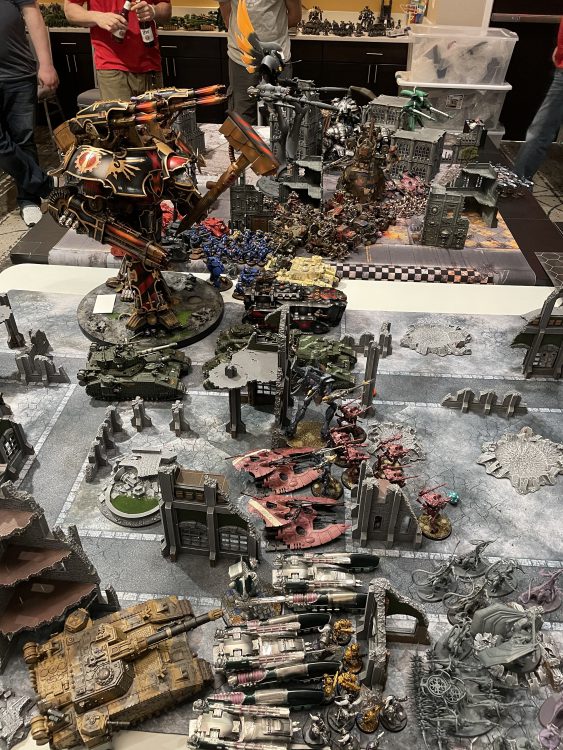 GH: Do you think Apocalypse has a future? It’s not the first time that the community has stepped up after GW has dropped support for a game.

Squid: I hope it does, because it was a lot of hard thinking for us to come up with. At this point, even if GW doesn’t support Apocalypse, we will keep playing Fundapocalypse for years to come. 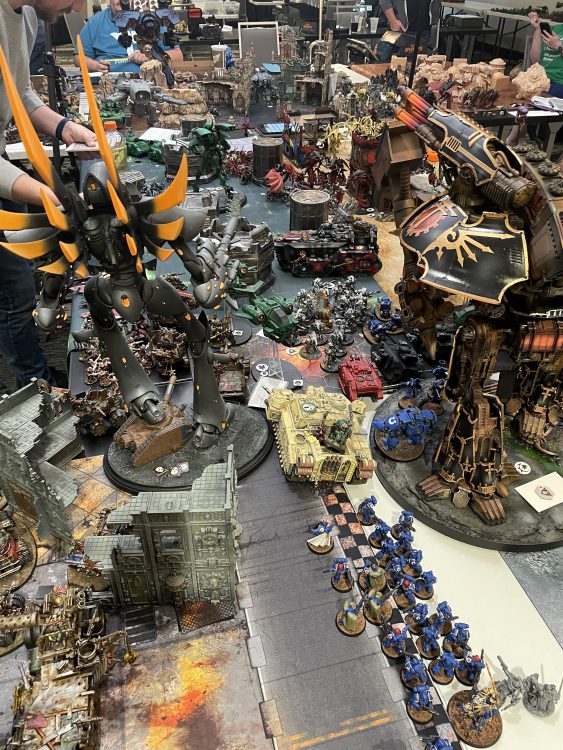 GH: Please talk about how much you like buttscribe, how it’s helpful, and you couldn’t do these battles without it because it’s such a great tool. This is entirely for my personal benefit. I need this.

Squid: Haha, we really, honestly, couldn’t have done it without you. In every picture, you will see buttscribe datacards tucked into the models on the battlefield – in November 2019, we required everyone to have their datacards printed and with their models, so that you had them handy, and so that someone else could activate your detachments if you were in the bathroom, or passed out (alcohol features heavily at Fundamalleus events).

Since we were now creating datasheets for the new models, we couldn’t enforce this rule – the PDFs published by GW didn’t have the new units. Reaching out to you for Buttscribe support was the best option I had, so that everyone could get their new datasheets printed and ready to reference. We literally could not have done it without you. 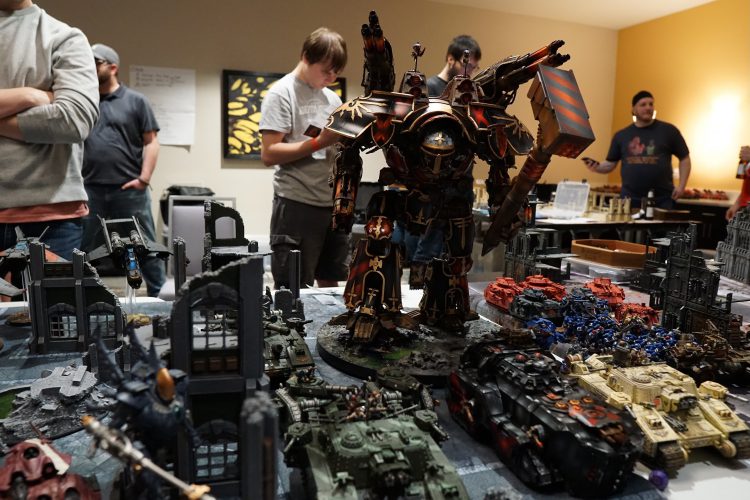 GH: Anything else you’d like to talk about, while you’re here? Your hottest takes, thoughts on the game or the hobby, whatever you got.

Squid: We have some tweaks we want to make after this event, but if you want to try out the Fundapocalypse rules, you can find them here, The BaD guys also have a dope website, and are welcome to anyone in the greater Cincinnati area that wants to roll some dice. They put together a recap of our event here.

I’d like to thank the Tipsy Squid, a local hombrewer that supplied us with a lot of the booze for the event. I don’t know if it was wise to have that much beer in the same room with that much resin, but it was definitely fun, haha.

Aaron, the guy who took the awesome pictures for our event, has been a key player in our events for the last few years, too. We got him to buy some Tyranids, now he just needs to get them painted and on the table! Check out his instagram.

I can’t even begin to express my gratitude for everyone in the Fundamalleus and Bolters at Dawn groups – a lot of work goes into an event like this. You can tell in the pictures that everyone was having an absolute blast. That is what makes it all worth it, in my eyes.

As far as the whole game and hobby, I think “have an absolute blast” is something we all should be ready for. We were lucky that we were all able to get vaccinated before this event, but the world is about to open back up – remember that we all are just here to have a great time. “Don’t yuck yums” is the bare minimum – celebrate each other’s yums, and be excellent to each other. 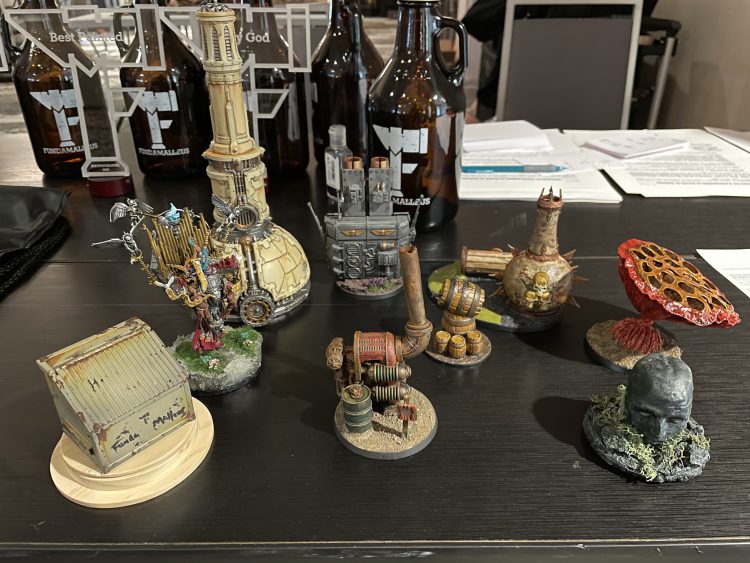 A selection of objective markers, trophies, and growlers.

Thanks norman for taking the time to talk with us, and providing a pile of photos for us to ogle and include in the article here. We’re always happy to support the community when cool stuff is happening – the battle itself is obviously Very Cool, but resurrecting a game that GW stopped supporting, and doing it in an inclusive and fun way? That’s the good stuff.