The Neighbor’s Lawn: A Display Case that’s NOT a Detolf (!) 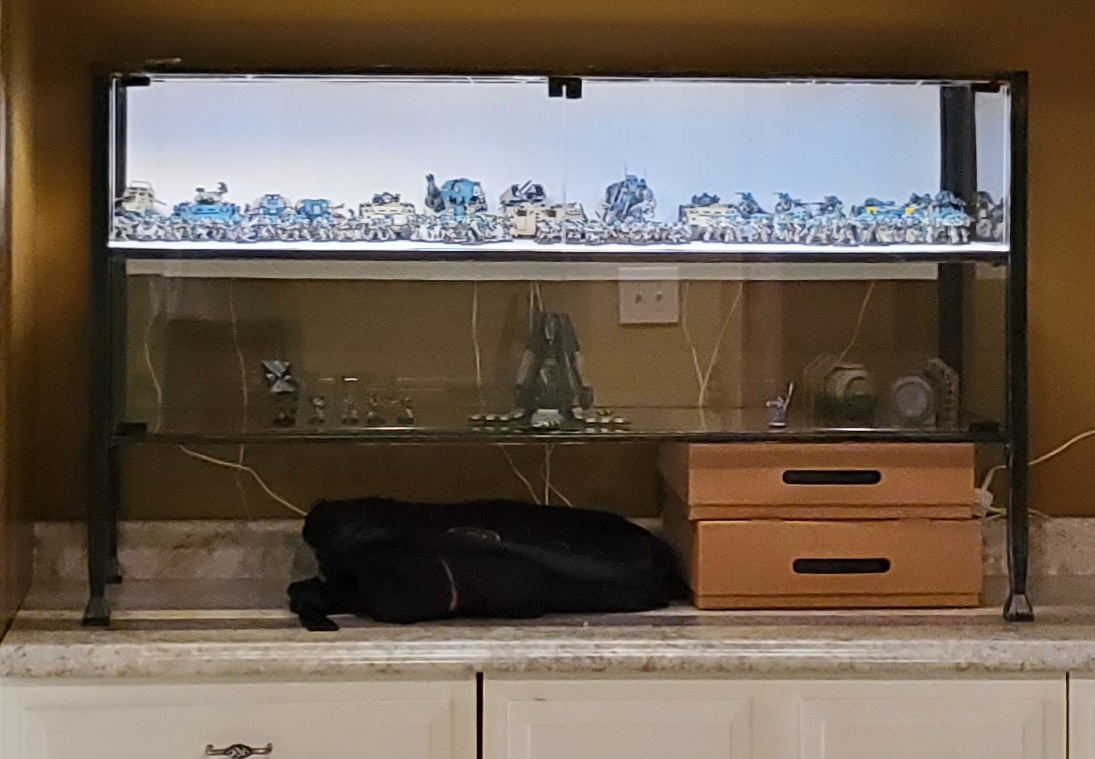 After Testor’s plastic glue, Ikea’s Detolf might be the single most universal 3rd party accessory in our hobby.  I have had one to display my models for going on 12-13 years and it is amazing for the price. That said, we’ve moved and I now have a massive finished basement for a dedicated hobby room.  For serious, it’s Tuttle big. Like, in a year or two I may be hosting a Goonhammer regional RTT (working name “Goonhammer RTT: Surrounded By Corn”). Since I’m in a basement flooding, while extremely unlikely, is technically possible. I want my boys comfortably off the ground. Sorry, Detolf, but you’re retired. 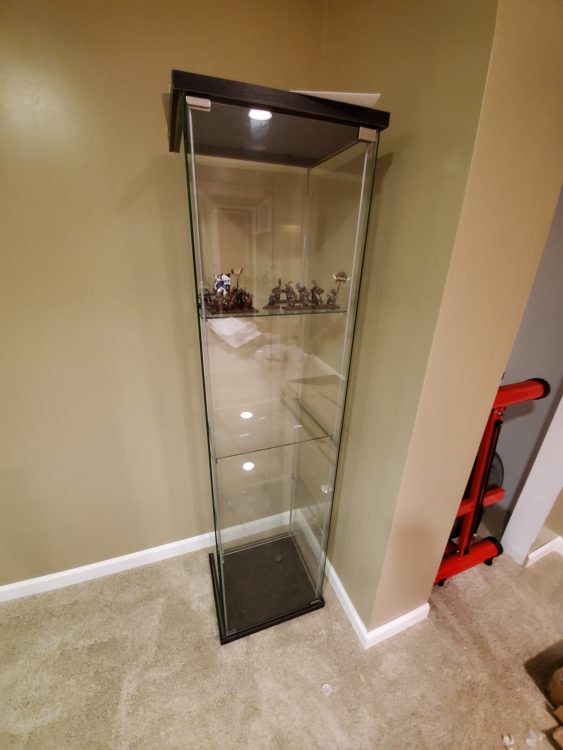 You gave me everything you had, oh you gave me life.

What I wanted in a change was:

A: Clearance from the ground.

B: Multiple shelves with a wider base. I prefer having the entire army on one shelf.

C: No central door frame/pillar blocking view of the shelving.

My wife and I have a running argument on Ikea. I feel that the quality control and value are way above what you can expect from comparably priced competition. If you want to pay 2-3 times the price or more you can find better options, but for anything close to the price Ikea is pretty much it. That said, they didn’t really offer exactly what I was looking for.

What I found was this: 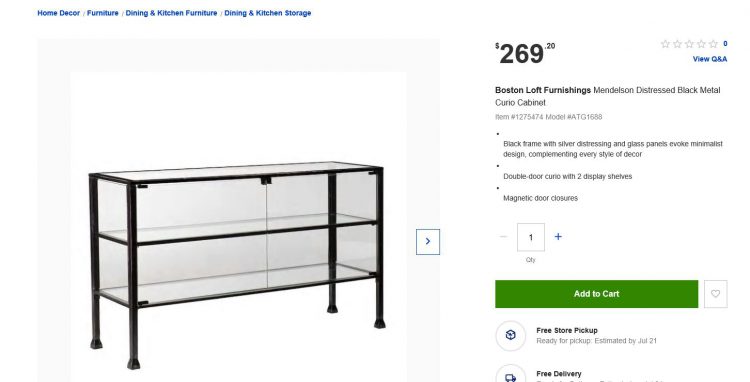 The dimensions were perfect for what I wanted and it looked solid.  $270 was at the high end of what I wanted to pay, but was within reason.  9” tall is about the minimum height I would have considered for each shelf.  50”x16” is more than enough to store 5-6000 points without issue.

I’m writing this review because I could find literally no information on this case outside of the seller’s website.  As far as I can tell the stock photo is the only photo on the internet prior to this review. 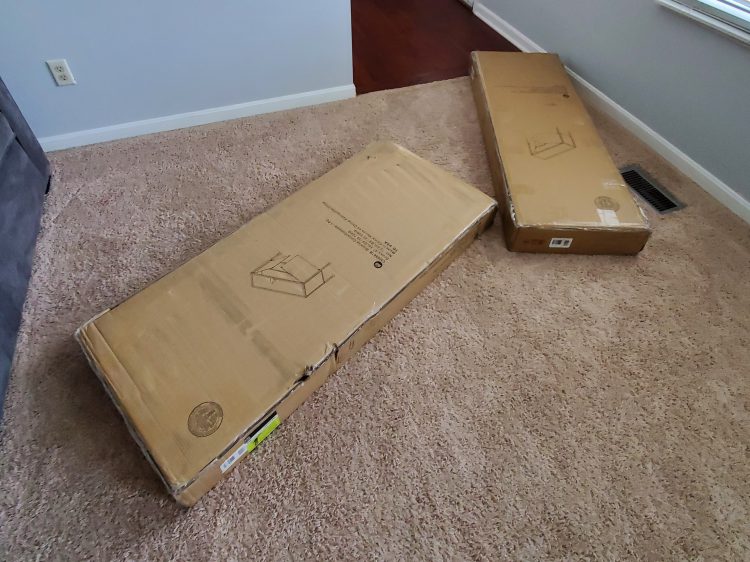 Here is the packaging on arrival.  This thing is heavy.  I can say with certainty that, by the time your child weighs as much as this display case, someone will have made a good faith effort to teach them Pythagoras’ Theorem, even if they attend an American school. I actually had to open the packaging close to the door of the house and carry parts down individually.  There’s a lightness to Ikea products due to particle board that this doesn’t have. It definitely seems as sturdy as a product using tempered glass can be. 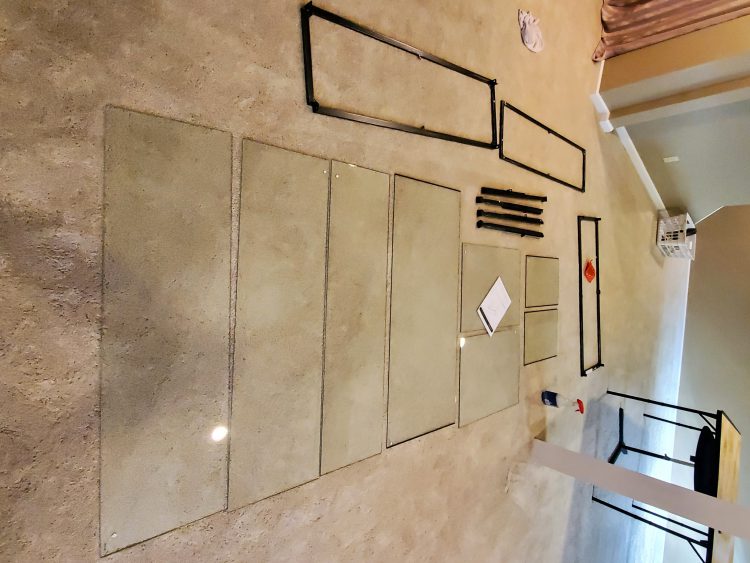 Parts splayed out. When building an item like this obviously working on carpet is nearly mandatory.  I recommend using gloves and Windexing the panels prior to assembly.

China expects you to store old school lead models in this, apparently.  The body is listed as iron, and is hollow, so I’m not sure where we get lead.  The frame is actually fairly light, all of the weight is in the glass. 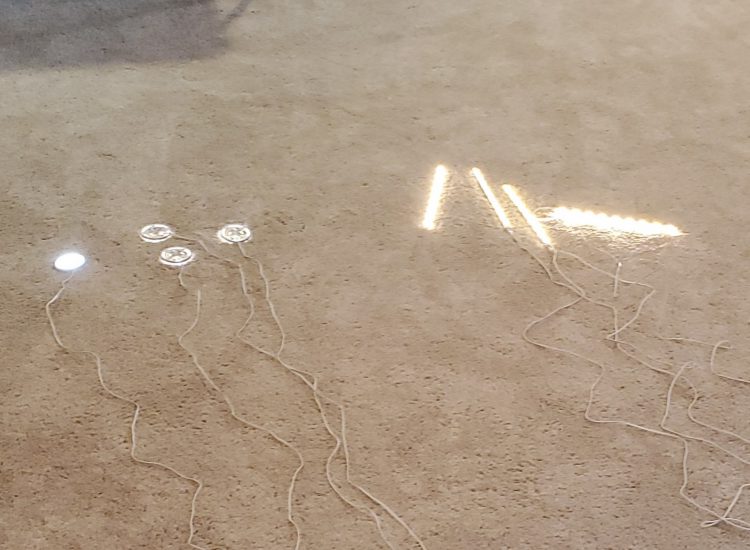 I am using a number of Ikea lights, from two fixtures.  I decided to use all of the lights on the display shelf.  Wiring is possible through a tiny sliver of an opening under the top panel, if I had wired the bottom shelf there are two openings at the bottom corners. 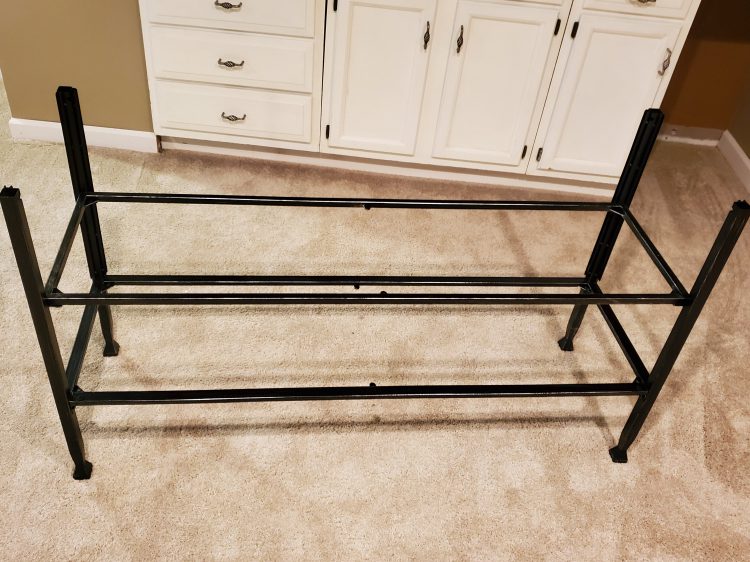 The frame is super solid and well-constructed. It’s rated for 40 pounds on the lid and 30 pounds a shelf. I imagine that’s dependent on the glass.  The frame seems like it would take considerably more than the weight of the unit + 100 pounds. 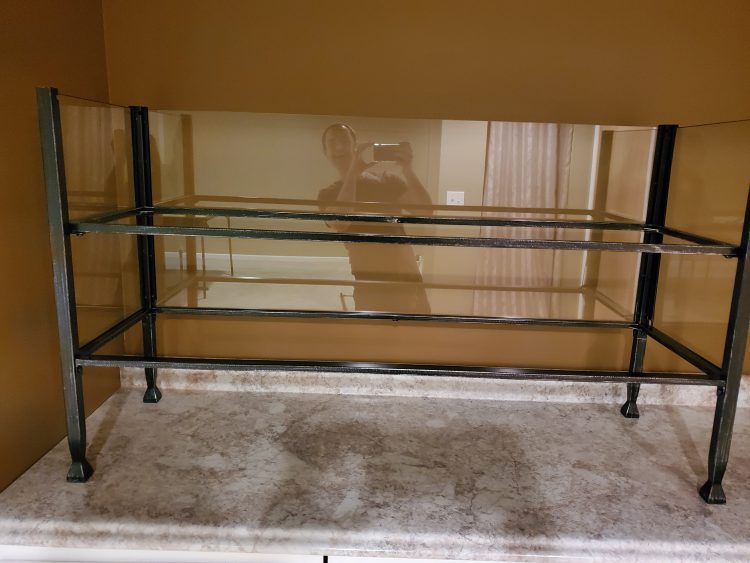 The back and side panels slot into grooves on the legs and then the cap is added.  Up until this step they direct you to keep the screws loose, so assembly up until this point is essentially toolless. 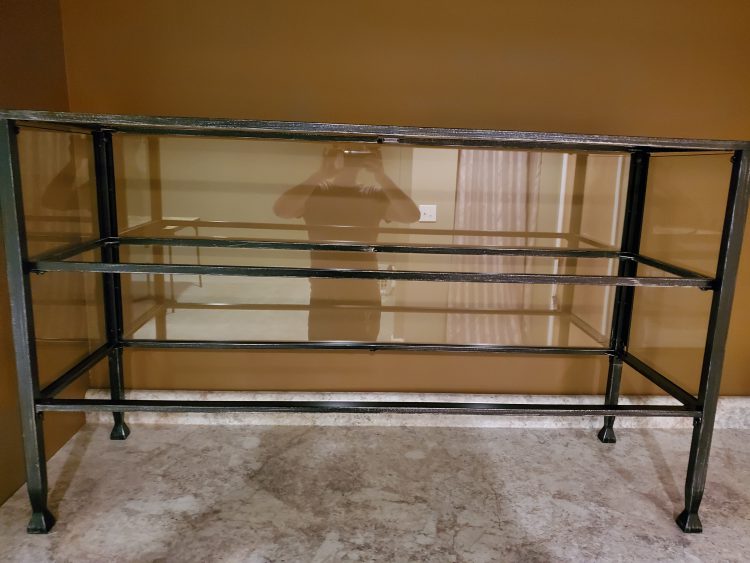 With the cap added. When the screws are tightened the whole thing is solid and appealing looking.  Up until this point it’s a very impressive kit.  There is a point where it all goes off the rails, though… 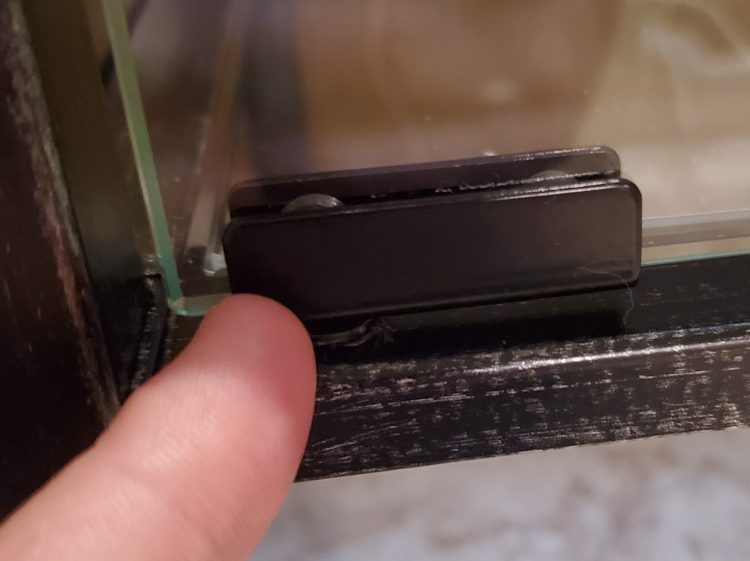 And that point is the cabinet doors.  There’s a plastic input for the door hinges and some of them were slightly off center, requiring them to be banged in with a heavy tool.  One was glued so off center I had to pry the plastic off the frame and basically use it as a washer.  Very sloppy. 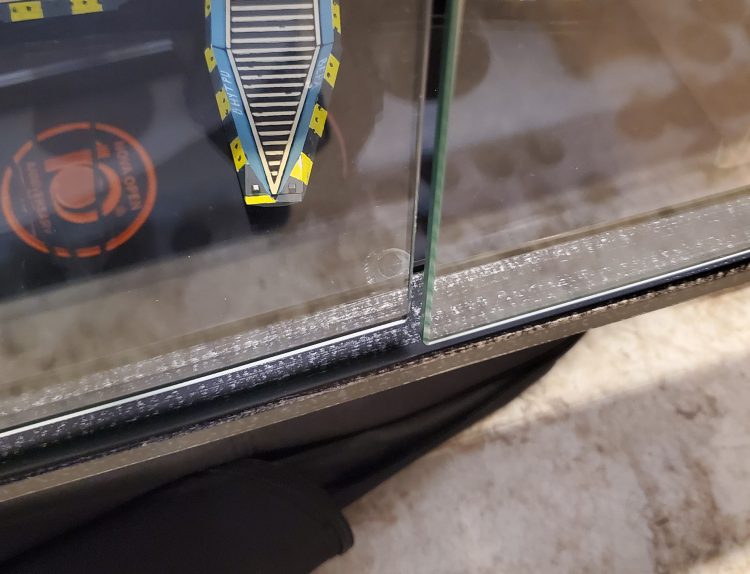 In addition to that the doors are slightly too long.  It’s actually impossible to connect them in a manner where they don’t overlap at the center (causing it to be impossible to shut) or catch the shelf at the hinge before it fully opens.  The photo above is what the center looks like AFTER ensuring the doors are level with a leveler.  The shelf will be closed an overwhelming amount of the time, but I am not impressed. 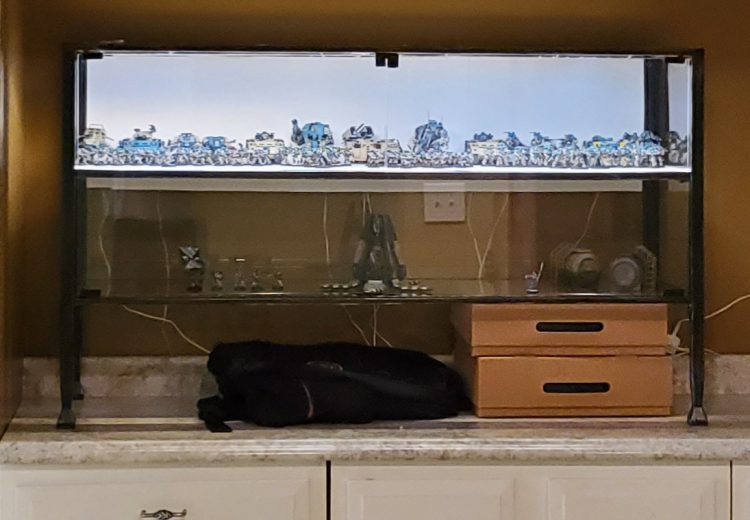 Finished product.  My take on this item is that it works well for me.  I would recommend this product to someone with the exact same preferences as me.  For the vast majority of people, though, I do feel like better options are out there. I also feel like the doors would fit if this thing was the Ikea Gromshoeldwien or whatever. Since the point of a display is showing off the contents I have also included glamor shots of the contents.  Do people insist on a grade?  Is that still a thing?

I’ll go with 7/10. It would have scored higher if the doors closed.