This weekend Kill Team: Pariah Nexus goes up for pre-order. Games Workshop were kind enough to send us a set, so we’re going to dive in and take a look! Later today we’ll have a breakdown of the new rules for killzones and missions, and a separate look at the new datasheets for Space Marines and Necrons that are in the book too.

Conceptually this box is a Kill Team Expansion, this time located in the Pariah Nexus, previously seen as the setting for the full-fat 40k Crusade expansion Beyond the Veil. To this end, them, we have a softback rulebook for the expansion containing a little fluff telling us what the Pariah Nexus is and what our Marines and Necrons are doing there. The board that’s packed in is two-sided, and each side gets its own fluff page too, letting us know what exactly a Translocum Chamber and Crypt of Cynosure are.

There’s also, of course, a whole lot of Necron Boxes, to go with some Necron Doors, and Necron Walls.

To incorporate these new rectangles into your games, there’s an updated set of rules for Ultra-close Confines along with some new Kill Team Tactics, a couple of Killzones (one for each side of the board), and some new missions, six for Matched Play and two more for Narrative. There’s also two card decks of objectives, and mercifully this time both the core objectives and the expansion-specific ones are included, which is a step up from the Arena expansion.

And that is, kind of, it, in terms of content which is specific to this thing as an expansion for Kill Team. The book is 112 pages, but pages 50-112 are almost all reprints – of the Commander rules, of some advanced rules for deep strike and the like, and of datasheets, traits, and tactics for the Marines and Necrons. Some new-for-9th-edition (and therefore new-to-Kill-Team) units also get sheets, but they’re a distinct minority. There are some excellent new miniatures, in the form of the Captain with master-crafted heavy bolt rifle (say that three times fast), five Heavy Intercessors, a Chronomancer, and five Flayed Ones. All of these are of course long-awaited but not really for any reason to do with Kill Team itself, but instead because they were shoehorned out of the mainstream 40k releases for Space Marines and Necrons which have been rolling out over the last four months or so and put here instead.

This point is important because it kind of gets to the heart of this release, and why I’m struggling to find much to say about it, and really why I’m struggling to work out who or what it’s for. A solid half of the rules content here is just reprints of things that already existed, some of which reverses previous printings (Death Defied is once again 2CP, for example). That would kind of make sense if this was a starter set, but it distinctly is not that – for one thing the sides are hilariously unbalanced even for a Games Workshop starter, and for another it doesn’t actually have the core rules in, so there’s no way to pick up just this product and play a game of Kill Team. At minimum, you’ll need to buy the core manual on top. This is clearly badged as an expansion of course, but having to make another purchase just to play a game with what’s in here is a bigger ask than it sounds because this box is expensive.

We’ve been critical of Kill Team on this site before, and this box really speaks to all of our problems with it. It’s priced like a core starter box that you should be able to pick up and play, but without the ability to do that (which runs somewhat counter to the fluff pages, where both factions get write-ups of the ‘this is your first contact with Warhammer 40,000’ variety, which suggests at least someone was envisioning this as the first and only box someone would buy). It has a couple of big sprues of terrain but what you get is so specific to this set, and even to these particular Kill Team boards, that it’s hard to see it getting much use on a regular 40k table; you’re not going to be building the foundation of a real terrain collection with “some Necron boxes and doors”, unlike the original Kill Team starter, or even Arena (which also cost half as much). Despite its branding the “Pariah Nexus” theme here is fairly superficial. It doesn’t feel like a lovingly-developed setting that just had to have a Kill Team release – there’s not enough meat to the background section to really immerse yourself in it, and the rules section is hardly bursting at the seams either, especially given that a lot of it is copy-pasted.

That leaves the new models as the main attraction (on which note, have some sprue pictures): 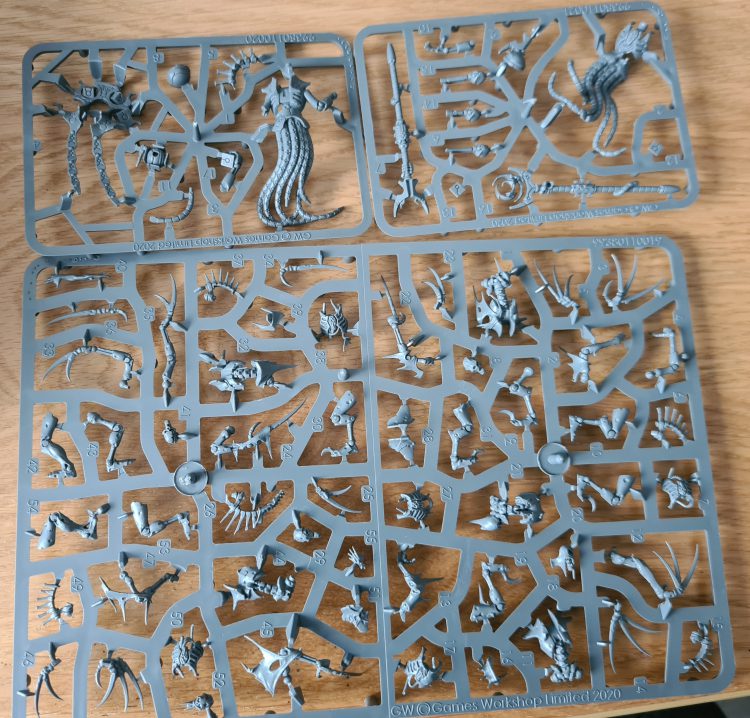 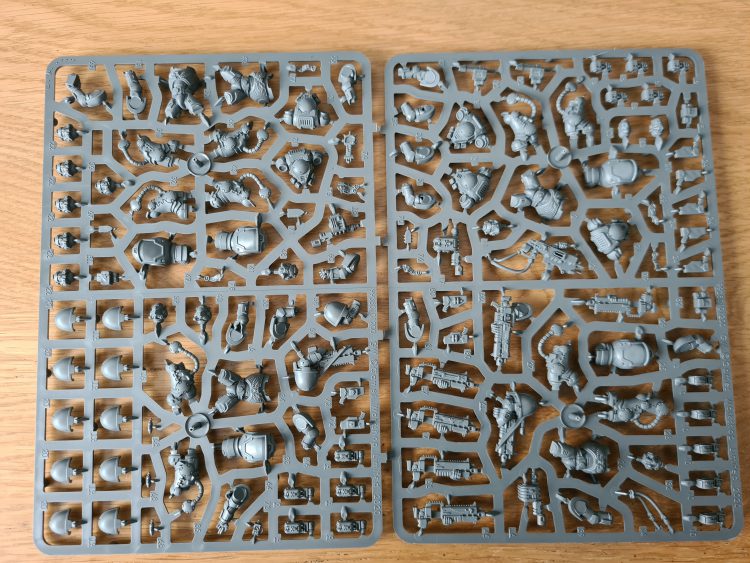 And those are great! They’re nice models! But they have nothing to do with Kill Team! Including them actively makes the box worse, even, because they’re clearly stuck in here to sell the thing on the strength of “cool, all-new models” but that unbalances the game part so severely that it’s practically useless as a product by itself. Which is, really, my point. Kill Team is a huge missed opportunity for Games Workshop, a game bogged down by its inability to separate itself from full-sized 40k (indeed, from an edition of 40k which is no longer current to 40k itself), and from its own messy overlapping expansions and revisions. It’s not really any more accessible than the big game, but also doesn’t do much of a job of on-boarding you to it. With zero significant releases in all of 2020, it felt like it was past time for a brand new Kill Team with a new starter and a new edition, a big reset which rationalised the discombobulated tangle of expansions and White Dwarf rules and out-of-print boxes into something modern and sleek which finally gave the game its own room to breathe, in the manner of Warcry. Instead, we have an expansion that doesn’t do that much expanding, where the main value proposition is paying over the odds to get hold of miniatures to use to play a different game a few weeks earlier than you otherwise would be able to. On that basis alone it will probably sell like hotcakes, but it’s a shame to see Kill Team itself fumbled yet again. Its core concept has a ton of potential, but that potential has yet to be realised, and as long as it limps along with releases which can’t decide whether they’re really for Kill Team or are just premium-access 40k boxes with a bit of window-dressing it probably won’t be.

For more on the rules in the new expansion, check out part 2 of our review here.