Wizards has apparently backed off their strategy of horrible tri-color pre-cons full of ETB tapped lands, monstrous mana bases, horrible over-costed mana rocks, and ridiculous 5+ cost sorceries. The preconstructed decks for Baldur’s Gate are all fairly decent, tighter, cheaper, 2-color decks. It’s weird. And sure, there are still a lot of issues to overcome, but out of the box Exit from Exile mostly has cards that have some synergy with its commander.

A basic problem with decks like this is the mana costs – the deck wants to rush out Faldorn, Dread Wolf Herald, then use her ability and keep casting fairly expensive spells to keep exiling, and then in turn casting those things. That’s a lot of mana. You’d be forgiven for expecting to see a bunch of cards that boost your mana production – Mana Flare, Gauntlet of Might, etc.. but none of those are in the deck. However, there are some decent land tutors to at least ramp you a bit at the beginning. The deck boasts 39 lands main deck, and includes several ramp lands or spells, so you should be able to get to the 5 or 6 mana range by turns 4-5 fairly consistently. This is not terrible.

Usually, these decks don’t even have any realistic way to cast their spells. There’s a total of 21 spells that cost 5 or more, and if you add 4+ that’s 34, and on top of that you’d expect to be activating Faldorn to get wolves all the time, meaning you need 5+ mana basically to play the deck. Add in ETB tapped lands, or lands that themselves are ramp costing mana like Blighted Woodland. The obsession with dual color lands and etb lands is also a bit strange because so few of the cards require multiple mana. Yes, there’s 6 or so double RR cards and 8 that cost at least two Green mana, with several costing GGG, but these all cost 4+ mana, so you’d need to get weirdly land screwed given that you are both fetching and have a looting commander (i.e. Draw and Discard) so mana fixing to get a decent spread of red and green in an only two color deck doesn’t seem that difficult. Whenever you tutor or make a selection of what to discard, just balance your colors. Simple. 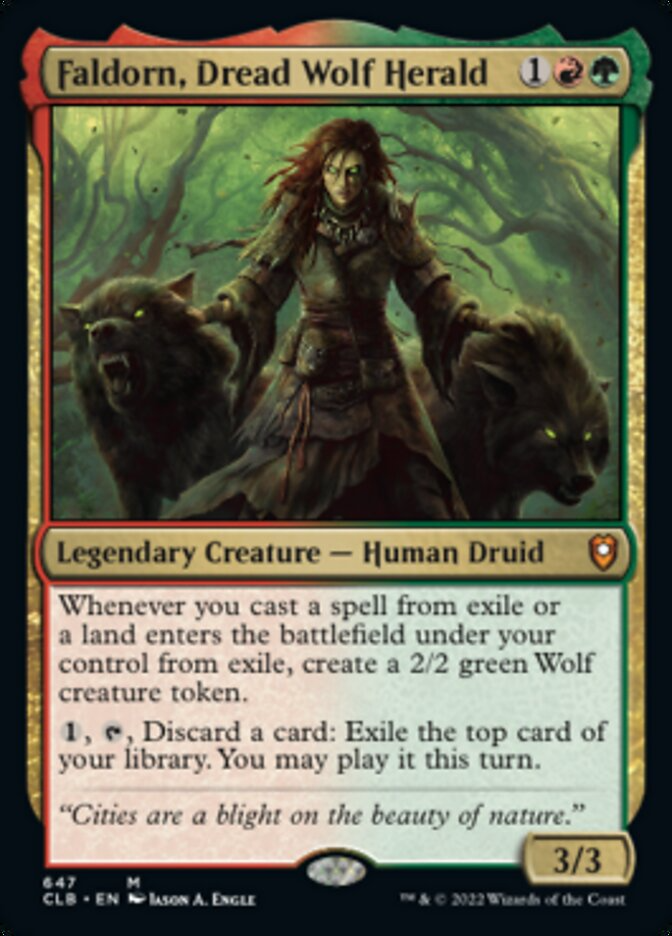 The real problem this deck has, by default, is the lack of an end-game plan. End-Raze Forerunners should close out the game for you, but with no tutors and only rummage to get to it, that’s a rough game plan. There are some big fatties, like Etali and Dream Pillager, which can potentially let you draw through your deck, but if the plan is to slow ramp-up to 7 mana, then hard-cast dream pillager, then wait a turn, then start attacking to grind through your deck, that’s a fairly rough game plan.  The deck also doesn’t run any mana burst spells really, so it’s not as if you can just plan to come up with the 10 mana to end-raze and end the game. If your plan is the long game the deck needs stax cards and control to slow down combo decks and stop them from going off and prevent things that are simply to threatening to sit on the board. But as is typical for a commander precon the control cards are close to non-existent (to be totally truthful these feel actually better than the average). Sure, we’re missing core cards like Abrade and Lightning Bolt; actually no, this is pretty bad. As a rule of thumb your deck ought to have around 10 control cards at instant speed. This deck has a total of three that I’d consider to be in that category. On top of the hideous mana requirements of the deck, holding up 5 mana to control purposes is laughable.

To rebuild this deck, our first step is to focus it. We want to do something consistently, figure out other ways to do similar things, figure out ways to benefit from what we’re doing, and then win by doing the thing we want to do.

It’s pretty common in Commander for this thing to be “do the commander’s thing.” The downside to this is that people can (and possibly ought to), just blow up your commander.  But honestly, this was never going to be a super-competitive deck.

Which, conveniently will cause the triggered ability to go off whenever you ultimately play the exiled card.  It’s also nice that it’s play the card (not cast) it’s also nice that the wolf trigger works from spells or lands; a lot of exile abilities don’t allow the playing of lands. 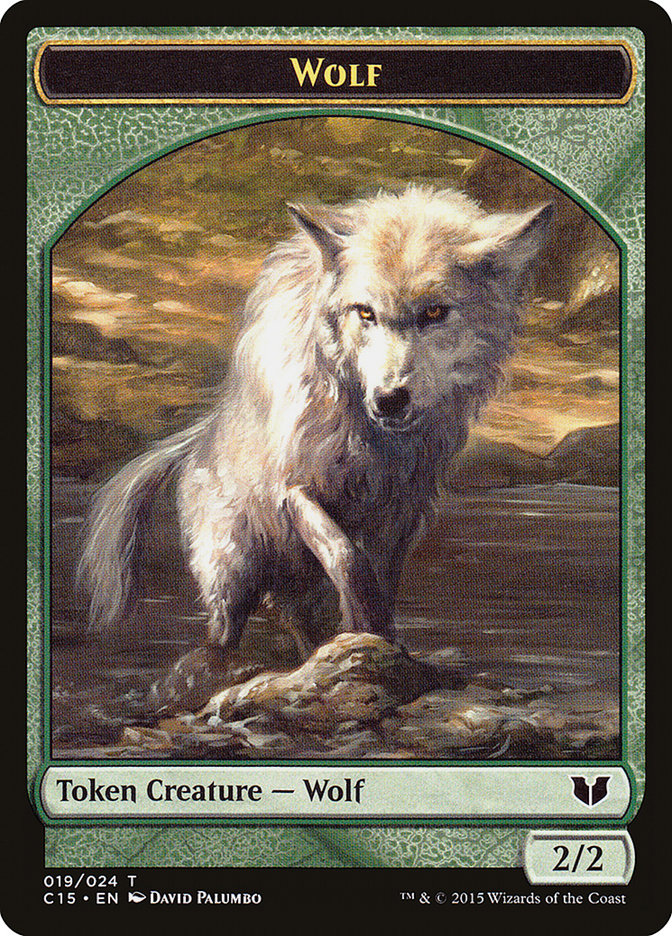 It’s a bit sad that the token isn’t a dread wolf token. Regular 2/2 wolf tokens are a bit boring, obviously maybe it’s the herald that is dreaded, but it’d be nice to see menace somewhere. Would the wolves be overpowered with Menace? No. The answer is no. End of discussion.

If we’re discarding cards and drawing there’s a fortunate coincidence, there are a number of cards now that allow us to benefit from discarding – both Containment Construct and Conspiracy Theorist are great fits for the deck, cheap creatures that allow us to exile and then cast or play discarded cards (depending). This is sort of having our cake and eating it too – we’ll discard to draw, and then we can cast both the discarded card and the exiled card, and then create two wolves.  Hopefully.

To cast both these things and activate the ability though will cost a lot of mana – we’re talking 2 * the average mana value of the deck alongside 1 to activate. So lots of cuts of expensive stuff for cheaper stuff. This is a fairly common exercise in making a deck better – cutting a deck’s costs from an average mana of 4 to 2 is effectively an exercise in card advantage. The actual card advantage doesn’t just come from having cards, it comes from playing them. If we’re playing two cards vs an opponent’s single card, generally we’ll be having more game impact. It gets trickier than that, obviously; absolute card advantage only matters when we are routinely running out of cards and being forced to play by topdecking. 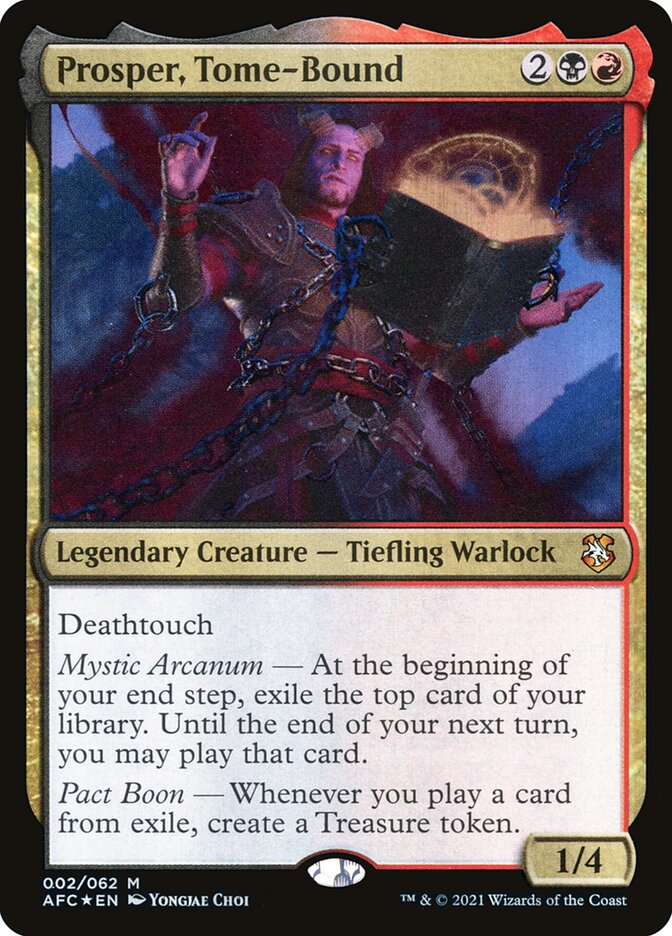 I want to pause here and mention a very similar commander: Prosper, Tome-Bound. Prosper has a similar play-from-exile ability, and a similar exile to get the pseudo-draw ability.  Prosper is a very similar commander, but much stronger.  Treasures are generally better than vanilla 2/2 wolves, because, you know, they can be tapped for mana. Prosper also doesn’t have to have his abilities activated; his abilities are both triggers, and he ramps and goes completely out of control frequently because red has lots of “impulsive draw”.

There are a lot of sources of exile play now – foretell, adventure, rebound – which don’t require tapping, so they will occur as soon as he comes out. Including a bunch of these sorts of things gives even more draw, and causes some funny situations.  You can exile Embereth Shieldbreaker, cast it from exile for a wolf, then exile it to later cast the adventure and get another wolf which is fun.

Speaking of wolves, generating a lot of wolves has a couple of potentially implied game plans; one is go wide and pump your wolves. Include a bunch of ways to make your wolves big fatties and get trample or something like that (oh what if Dread Wolves had the ability to deal damage as though unblocked, like Thorn Elemental? That’d be cool. But they don’t). One of the best ways to leverage lots of creature tokens being created is to just use it as a trigger to deal damage to your opponents directly. This gets around things like blockers, or fog effects or other weird situations you can end up in where you can’t attack someone (locked away in a Mystic Sanctuary, maybe).

Each of these will deal damage to your opponents every time you get a creature, including your wolf tokens, which should get your opponents fairly low in short order.

To finish them off you can run over them with 10-20 wolves, or else use one of the finisher cards.

While some of these are quite expensive, every 2 cost “fetch a land” is included, alongside Cultivate and Kodama’s reach, so lands should come right out.

There’s a couple of stax effects to slow your opponents down:

Running these should slow your opponents down while not hurting the deck much, so it’s worth cutting the mana rocks and focusing on land ramp, though it may draw a fair amount of hate. There’s still a fair amount of non-basic lands, so it’s a balancing act, and cutting down to purely basics might be advisable. If you want to lean into Magus of the Moon, it can be fetched with a variety of green creature searches (as can collector ouphe) so the deck could be more focused and consistent in this way (and also use these to grab combo pieces or finishers).

There’s also the addition of some standard staxy type pieces – Cindervines is just an amazing card all-around, Goblin bombardment lets you sac your generated wolves to ping off dangerous utility threats, and several of the exile type things like Urabask the Hidden sort of have a staxy effect.

To play the deck look for a ramp card or two in the opening.  After that you want to rush out Faldorn, and get one to two card advantage engines going and pump out wolves, then get a trigger into play or something to benefit you from this wolf generation.  Once your opponents get low from triggers, look for a good finisher to close out the game.

It seems like a huge cut list, but the lands have to switch to snow-covered to allow for into the north, and that is solidly about half the cuts.