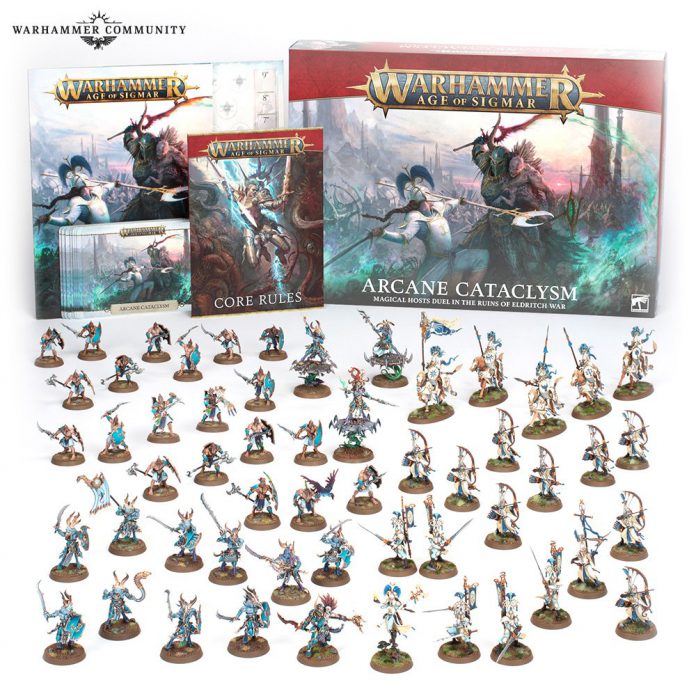 This review was conducted using a free copy of Arcane Catacylsm provided by Games Workshop.

Magical mayhem ensues as the cultists of Tzeentch and followers of Teclis clash on the fields of Hysh. Following the war between Teclis and Nagash in Broken Realms the followers of Tzeentch seek to gain a magical weapon buried in the sand, while the Lumineth do not take this trespassing lightly.

The box set is interesting as both factions are considered the most casted heavy in the faction, nearly every Hero and several units can all cast spells, meaning fights between these 2 can lead to an intense Hero phase! It’s also a portent of a books to come for both armies, so think of these packed in warscrolls as sneak peeks at what’s coming soon.

The Curseling has struggled pretty hard to make a name for itself in the faction. In theory, it exists as a hero to dominate against enemy casters with the ability to reroll unbinding and dispel rolls and the ability to steal spells. He didn’t really succeed at this because a Lord of Change or Kairos is essentially an auto-include, and they’re far better at it. The Curseling is nominally a bit of a Warrior-Wizard but doesn’t really do the job in combat that it would need to to take that role.

First: The Good. The warrior aspect of the hero has been boosted a fair bit. It received a decent ranged attack with 3 shots and rend -1, decent for some chip damage. The flail has been removed, rolling it into the sword attack which now does 2 damage to make up for it, and wounds on a 3+ instead of a 4. Finally the staff is a 4+ to hit instead of 5, and while it only does 1 damage you get 3 attacks with it, evening out the damage somewhat.

The bad is that his most unique ability has been shunted. Previously, he could throw a spell back that he unbinds and his warscroll spell allowed him to steal a spell outright. Now he has an ability, Glean Magic, which allows him to cause an enemy caster to have one less casting/unbinding for the turn on a 4+, and his warscroll spell gives a 6+ ward to an Arcanite unit

I’m of two minds to the changes here. I do think the current design is a lot more practical. The ability to steal a warscroll spell or cast a spell back at an opponent always sounded nice on paper but in practice it didn’t always work out. The most devastating spells are mostly buffs, not debuffs, and those are all tied to the faction keywords. Tzeentch already has no shortage of mortal wound spells so you probably weren’t stealing those. While these new abilities are better and more practical, it does remove a bit of whimsy for me, and that’s sad.

These guys had a bit of reshuffling to their abilities, but feel very familiar. The Paired Curse Blades no longer reroll hits, as we probably expected, but give a bonus attack to the unit. This makes the option a bit more tasteful, though keeping the 6+ ward on shields is still very appetizing for a unit that is generally meant to hold points and shoot volleys.

Speaking of shooting volleys, they’re better now. The scrollbearer now grants -1 to Rend, just like their spell used to do. This means they will more consistently get that -1 rend they need to be effective. The downside is…the spell is gone, all casting is gone from the unit, in fact. This is probably going to come down to what the new book is going to look like, because losing castings from units is going to make the faction more difficult to play before we get a rebalance to summoning points. So overall, the change is good for the unit, maybe less good for the faction as a whole.

Mercifully given a unique name other than just “Tzaangors” in order to distinguish it from the other types of Tzaangors in the book.They see a 25 point increase and largely very similar to how they were before: run and charge and 6+ ward with shields but now wound on a 3+ with all of their weapons (yes, including beaks). However they now only receive a +1 to wound bonus on the turn that they charge, instead of while near Arcanite heroes. The Ornate Totems ability is now used in the end of the combat phase instead of the start of your hero phase and only hits an enemy within 3″ of the unit. You roll 1 dice per enemy wizard within 12″ and each 4+ deals a mortal wound. This is significantly worse as it now relies on this unit surviving combat and also there being enemy wizards in range.

It’s now a more expensive battleline unit that can dish out a little more damage than it would before in combat, but don’t do any damage at range any more and with a 5+ save and Bravery 5 will still fall apart pretty swifty. Use them to try and flank around enemies to use run and charge on weaker units.

The on-disc version of Enlightened get an update here but the on-foot version do not, expect that will just be in the expected Battletome. The unit sees a hefty 35 point increase but does get a better save of 4+ now. Their attacks largely remain identical with their beaks now wounding on a 3+ like the Tzaangor host above and their Guided by the Past ability grants a +1 to wound rolls (not the disc’s attacks) if you’re going second this battle round. Their other rule Babbling Screams of Secrets has been overhauled and is so much better now by not allowing enemies within 3″ any commands. On a unit with 16″ move you can really place this wherever you want. Shutting down All Out Attack and All Out Defence is massive for a unit with this number of rend -1 multi-damage attacks and will definitely help their attacks stick.

The added points seems justified given their better save and command shut-down ability, but it’s still a reasonably fragile unit. Place them carefully instead of charging straight in and they can cause some real chaos.

The new aelf hero in the box is a 2 cast 2 deny wizard that once per game is able to cast a spell on an unmodifiable 9 automatically (that can still be unbound normally). A great extra power to be able to near-guarantee a spell that you absolutely need to get off, at least if the enemy lacks a bonus to unbinds. Additionally once each turn when they successfully casts a spell (from Lore of Hysh) and is not unbound you can roll a D6 and on a 3+ you can proc that spell a second time. The problem is right now is that its usefulness is a bit questionable. There aren’t many spells you need to cast twice an it’s competing with a few other heroes.

A unique spell lets you choose an enemy within 12″ and for each wound this model suffers that chosen unit also suffers a wound. This sounds great but on a 5 wound hero with a 5+ save if it’s being attacked at all its likely to die immediately and deal 5 wounds back at most; niche but potentially useful at the right time.

I’m not sure that Lumineth needed another foot caster for their army. The Leader slot is getting pretty crowded and the Enlightener’s direct competitor is the Loreseeker who can drop right in front of the enemy and cast Lambent Light right in their face. It’s not a bad hero, but faces a lot of competition.

The ever-popular archer unit of the Lumineth army, the backbone of nearly all Lumineth lists see a very minor update. They actually drop 5 points here but can no longer fire out of line of sight and their maximum range has dropped down to 24″. Instead of firing out of line of sight now they can choose a unit within 24″ of the leader that’s in cover and ignore the benefits of cover for that attack. Shining Company has been greatly simplified too: so long as they’re touching bases with at least 2 models from the same unit all incoming attacks suffer -1 to hit.

I was hoping for more of a revision on this unit – notably removing mortal wounds from range en masse like they can be but they still do that and still have Power of Hysh which is the same as before. We’ll have to see what – if anything – is dont to Lambent Light.

A lesser seen unit of the army, one unit can now be taken as Battleline for each Scinari hero you have. They’ve gained Shining Company making them harder to remove and better at staying in combat to slice up enemy units turn after turn. Their banners still negate spells that would affect them on a 4+ and they still act as a bodyguard for nearby Scinari heroes. Their attacks are identical as before as well, no changes there, so can either make a single attack that auto-hits and wounds on a 2+ with -2 Rend or make a number of no-rend attacks equal to the number of enemies within 2″ of each.

Overall this unit sees a slight buff. You will sometimes see one unit to guard an important hero, and it’s hard to imagine they’ll see any more use though in competitive lists but with the addition of Shining Company and able to be Battleline they may see an increase in popularity.

Thanks to the change of Shining Company as noted above this cavalry unit has better. They have Sunmetal lances for mortals on 6’s to hit, add 1 to wound rolls and add a point of rend on the charge with them, and gain extra attacks when targeting units with low wound characteristics.

Overall it’s a solid little harasser unit that moves fast and can dish out solid damage on the right target. They want to be charging things which are battleline normally anyways too so go ahead and throw them into a Bounty Hunters battalion for even more damage and really remove those pesky objective holders quickly.

Solid changes all around. Most units have been improved, with the dreaded Sentinels taken down a notch but not too far. As a box, it’s well designed, making sure to pack in battleline units to be a solid start to a new force (although I probably would have packed in some wardens instead of Dawnriders to make that battleline). The two new heroes unfortunately are kind of dull and don’t really make this a must by. Is it possible we’re running out of steam on constantly releasing new heroes with boxes without new units?

The new battletomes haven’t been announced, but they must surely be on the horizon. We’ll see soon enough.

If you have any questions or comments, leave one below or email us at contact@goonhammer.com.