Faction: Ultramarines (with a dash of Deathwatch)

Collecting Since: The start of 8th Edition (spot the Dark Imperium models…)

I built and painted this list as an exploration of the contrast between the new Primaris Marines and the Firstborn Marines. The Firstborn are all ragged, wounded, covered in battle damage and blood (and character/eccentricity), which is in stark contrast to the shining, unblemished armour of the Primaris, so new to the galaxy and as yet untested.

The narrative behond the army is taken from the fluff, apparently it was the Ultramarines 5th company (hence the black shoulder trim) that held back the forces of Nurgle as Roboute Guilleman slowly circled back to Ultramar (or specifically, the ‘Spear of Espandor’, the first time Firstborn Ultramarines fought alongside the Primaris) to end the Plague Wars. The army deploys as two tactical squads in various states of disarray led by a wounded Librarian (a nod to the classic story of Tigurius meeting the Legion of the Damned), representing a glorious last stand as these marines prepare to sell themselves dearly. Then, from Round two or so, all of the Primaris, Terminators and Death Watch arrive on the table (I hate to use the hackneyed term ‘like an host of angels’ but…) to save the day.

The army, particularly the Tactical Marines, are also there to try and add character to these underappreciated models. Their performance on the table (dying in droves, depleting a chapter of 5% of it’s strength everytime it deploys) doesn’t really sell how they are described to us in the fluff. The stories speak of these remarkable young men, 1-in-a-million, who are chosen to be genetically engineered into absolute killing machines that know no fear and shrug off wounds that would fell any other mortal. Also, everyone disrespects Tactical marines but they’re always described in the stories of being absolute bad-asses. As Jerry Seinfeld might observe: What’s up with that?

Yes, that marine with a Flamer has half his face and skull missing. What about it? He’s had a bad day and is trying his absolute best. Their bolters are out of ammo, so these Marines are gearing up for some sweet, sweet close quarters combat. My personal favorite is the one pointing at someone and yelling something like: “Yeah, you want some of this!?”

In my narrative, these are the Marines who are too wounded to engage in any sort of mobile warface and have been assigned to a static position where they can fire their bolters from cover. The fellow in the back with his helmet off is trying to do the William DaFoe pose from Platoon (yeah, that pose) but the limitations of plastic Space Marine posing defeated me. You can see some horrid green tentacle with eyes (Nurgle much?) dragging the Missile Launcher Marine down as a nod to the fact that this army is fighting during the Plague Wars.

This unit is composed of the more intact and combat viable marines. At the back you can see a pair who are modeled to plug into each other, it’s meant to look like one is limping badly and is leaning on his brother for support. Once again, the limitations of plastic posing are the Dr Moriati to my Sherlock Holmes. Like the Missile Laucher above, the Heavy Bolter Marine is being molested by something Nurgle-y. My favorite pose here is most certainly the beaky Marine on the far right, casually plugging away with his Bolter one-handed while pointedly ignoring the stump where his arm used to be. That, my friend, that is Space Marine As Fuck.

They’re here because they lean into the ‘reinforcements have arrived’ theme of the army. They rock up and shoot the crap out of something. The Terminator Captain brings a ‘Seal of Oath’ with him to help them shred something to pieces. To ‘pieces’ you say? To pieces. Originally, I was going to use a Primaris Phobos Captain here but they took away his Grave-Chute deployment option (Boo!), so the ole Terminator Captain got his chance to shine, instead.

You can tell I painted the Gravis Captain and Primaris Ancient at a different time to the rest of the Intercessors here as their ‘blue’ is much darker than the others (Also, I think I hand painted them instead of airbrushing the base colours on). The OSL from the Captain’s sword is a little subtle but it can be hard to communicate OSL without hamming it up. As is often the case with my painting, what looks good at 6″ away (while I’m painting the model) does not always translate well to the table (the infamous 3-foot rule). My concession to the ‘Reinforcements have arrived’ narrative is that I pay the CP to have these fellows walk onto the table mid-match. I don’t love it but there aren’t many Primaris options that get to Deep Strike natively and I’m already taking as many as I can (see below).

They should be Plasma-ceptors but I am a stingy, stingy man and went with the Dark Imperium mono-build Inceptors. Still, that’s a lot of Dakka.

Another opportunity to communicate how unique individual Space Marines are, we’ve got Cassius and the 9 meanest Xenos-hatin’ Tacticool Operators he could round up on short notice. Asute observers may note that I’m using the classic Cassius (on a 25mm base, heresy). This is because this Cassius was a model I painted for one of the GW in-house staff painting competitions years ago and he damned well deserves a righteous entourage. Where the rest of the army certainly isn’t min-maxed, this unit is somewhat a concession to ham-and-cheese. Three combi-plasma, three combi-melta, an Infernus Heavy Bolter, all listening to Cassius rant about the Recitation of Focus for that glorious +1 to Hit, represents a pretty hefty right hook. Two Storm Shields because I’m a human garbage fire just to wrap this unit up nicely (of course it’s the Blood Angel and Space Wold holding the melee weapons…).

It’s important to break up all of that blue with some other colours to provide strong contrast. This is why I went with the classic red bolters instead of the contemporary black ones (also as a homage to the mid-90’s, 2nd Ed. Ultramarines I feel in love with). I also used judicious amounts of blood dribbling and streaking down faces and armour to help break up the blue. The basing, dark brown and a medium-high saturation green static grass are other colours that complement/contrast the blue without blending into it or having too high a contrast to it (also, it’s easy to implement across an entire army consistently. Very important).

The black shoulder trim was not my favorite choice as it doesn’t pop/contrast well against the Ultramarine blue. However, the narrative demanded that it was the 5th Company who were present on Espandor, so black it was. Originally I tried providing strong highlights for the black but I found that it added a lot of noise to the models (who were already a little busy with the cross-hatching on the blue armour and the red complement), so kept the highlights on the black very muted. It still irks me, however.

I’m going to pretend that the reason the Tactical Marines have their Chapter Symbol on their armour and the Primaris don’t is entirely due to the fact that the Primaris are still to be assigned their final homes and are Unnumbered Sons (Greyshields, or something). It certainly has nothing to do with the fact that I’m really stingy and they’re all from generic boxes like Dark Imperium or Start Collecting Kits. Only the Emperor can judge me.

I threw Ultramarine ontop of the black undercoat so I could leverage the black to indicate shading where needed. Successive passes of Blue + White with the airbrush let me build up an impression of lighting on the models which were then accented by edge-highlighting with a brush.

In ‘normal boring’ art, particularly sketching, there’s a concept known as ‘hatching’ (and cross-hatching), which is using multiple very thin parallel (and then perpendicular) lines to indicate shading. I’ve been experimenting with a sort of hatching as a highlight for a few years now and I find it works nicely to communicate how light might play across textured, damaged or otherwise imperfect surfaces. Where cross-hatching is usually used to indicate shading in sketch art, I’ve found that I vastly prefer to use it as a highlight technique instead in miniature painting. Shading via cross-hatching very fine black lines on models looks very weird and is easy to mess up while highlighting this way seems to come together much more easily.

Below is an example of my hatching method used on both blue and red, as you can see it adds some visual interest to what otherwise might be very flat and boring plates of armour: 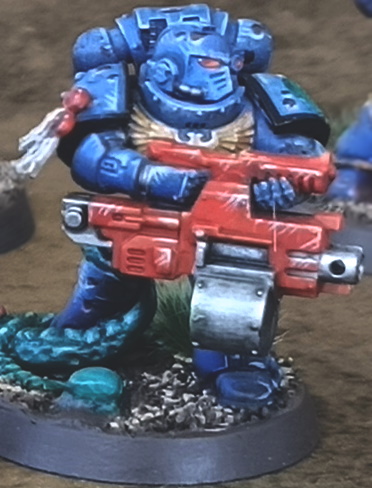 This is a complex painting technique/concept that is far better explained by Wikipedia than I. Click here to read about very clever Frenchmen. I used this technique to paint bullet gouges/holes into the armour of the Tactical Marines and Terminators to help communicate how much firepower it takes to…fail…to kill a Space Marine. Probably went overboard with this army but you can see a tastefully done examples in the photos above.

The following technique is how I do most of my Trompe-l’œil (pronounced: Tromp Luh-Eh, or listen to it here) . This is probably not the best technique out there but if you want to get something done quickly, applied to multiple miniatures across an army, this might also work for you.

Step 1: Apply your basecoat colour (in this case: Macragge Blue).

Step 2: Use either a dark brown (GW: Mournfang or Gorthor Brown) or a darker shade of your base coat to block out where the bullethole/damage sits.

Step 3: Use black (or near-black, GW: Abaddon Black or Dryad Bark) to trace out the ‘top edges’ of the battle damage (this represents the shadow cast onto the exposed lower layers of the material from the split/damaged upper layer.).

Step 4: Use a highlight of your basecoat colour (in this case: Fenrisian Grey) to trace out the ‘lower edges’ of the battle damage (this represents the points that are catching more light and as such, a sort of highlight).

Step 5: Use very sparing amounts of white (or near white, GW: Corax White or Ulthuan Grey) to indicate any extreme points of highlight on the lower edges of the battle damage.

Hopefully, you should end up with something looking like this: 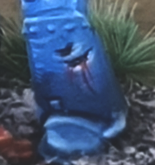 You can also use a sponge of sorts (often found in metal miniature blisters, older GW products or in the packaging of other miniature companies) to get a similar effect by only performing Steps 2 (or Step 3, but only pick one of these) followed by Step 4 (either by sponge or by very delicate brushwork.

So, how does it play?

Ha. Next question. This list isn’t going to be blowing the meta apart any time soon. In fact, I’d wager that it’s actively, aggressively poor into the emphasis on objective-holding in the 9th Edition meta. However, I’m here to tell my stupid story of old marines meeting new marines via the exciting medium of ‘tabletop wargaming’ and I’ll die on this hill, damnit. Consider this army as an example that this wonderful hobby can be exactly what you make of it: meta-chasing tournament play where results and contests of skill are the objective, through to displaying one’s creative/painting skills as well as indulging in the narrative/story of the 40k universe.