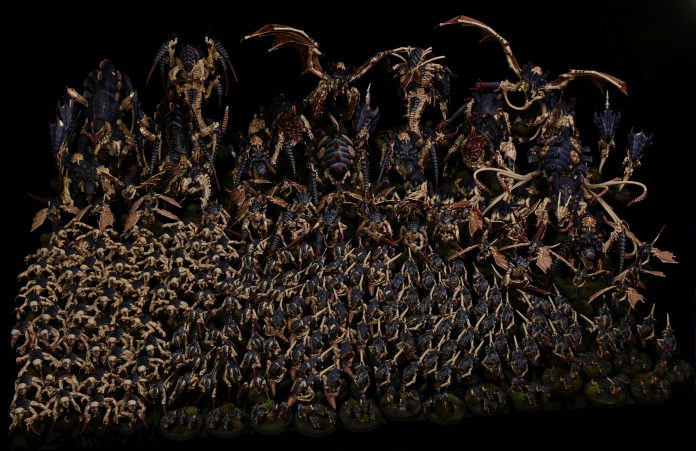 Finishing your own army is core to the Warhammer 40,000 hobby. In our Army Showcase series, Goonhammer contributors take a look at the armies we’ve been collecting for years, and the new ones we’ve just finished – what drew us to them, why we keep building and painting, and how they play on the table. This time we are taking a look at Rockfish’s Tyranids!

Where it came from

If anyone happens to remember my Tau showcase, you might recall I mentioned this:

…having struggled to decide between Tau and Tyranids as my first army, the choice was made when I was strongly advised that “Tyranids blow ass”.

Well, that choice clearly didn’t turn out to be permanent, given I started my nids less then a year later. The catalyst was of course the then new 8th ed codex getting teased, obviously I was hype as hell that the other army I had initially being considering was getting a real step up with some swanky new rules. I was already in a bit of down time as I had already painted a few thousand points of Tau and Salamanders, so convincing myself to start a new army was pretty easy!

I was quite indecisive as to what scheme I wanted to do, I tried a couple of my own schemes but ended up deciding I wanted to do either Levithan or Behemoth and even did test models for both. I don’t regret picking Leviathan as they are the iconic Tyranid scheme in my mind, but I am pretty tempted to paint up a second fleet in Behemoth colours at some point…

I am not 100% sure what was the first legal unit I finished was, but I think it might have three of these Zoanthropes. Its possible I finished some hormagaunts first, its been a while and I don’t have photos to prove one way or another.

I ended up doing some three or four thousand points following the books release and I played a decent number of games with them, but as usual with my squirrel like attention span I eventually got distracted with painting some other army. I believe that might have been the newer version of my Tau thinking about it…

Regardless, my nids ended up being semi static for the next couple of years until Blood of Bal got the hype train rolling again. Contrast paints had recently been released and I was interested in seeing if I could make the scheme go a lot faster. I ended up making some pretty significant changes at the same time as the biggest issue I had with my original version was that the lack of strong contrast within colours meant the highlights where not really visible on the table.

Honestly I am still really happy with how they look even now almost two years later, I am planning on some minor tweaks and revisions to the bases but I don’t have any major changes planned. I don’t know exactly how many models I ended up painting in that pass, but it was something like two thousand points.

I don’t know if I have mentioned this before but I have very little experience with comp play, in fact the only tournament I have been to was a RTT in Febuary 2020 where I fielded my nids to ok results given it was my first time going to one. I may have only gone 1-2 but I was still down to do more tournaments, but Covid ended up putting that one off for now.

While I haven’t painted any nids in a while, I have a haruspex and dimachaeron that I am just waiting on some supplies to come in before I start. I will admit that I am kind of reluctant to work on the army prior to the codex as I already have a number of all the models I like the look of and I don’t want to do a bunch of loadouts that turn out to be crap. I do plan on doing the odd unit here and there, as the temptation to play them with their warzone update is pretty high. I have been working on a kind of adjacent project though, my genestealer cults!

I don’t really intend to do a large army of GSC, mostly enough to look neat next to my nids as a hive mind force. On the other hand they are going to get a book quite soon, so I might end up filling out a full force…

Here are some of the big modern monsters, I can’t say any of them have had much luck in games but they look neat!

I have some small carpets of gribblies of various eras, I will admit to really hoping they update some of the models so they aren’t 50% mold line by weight!

Finally, here are some of the old monsters.