Boardhammer: Warhammer Age of Sigmar – The Rise and Fall of Anvalor Review 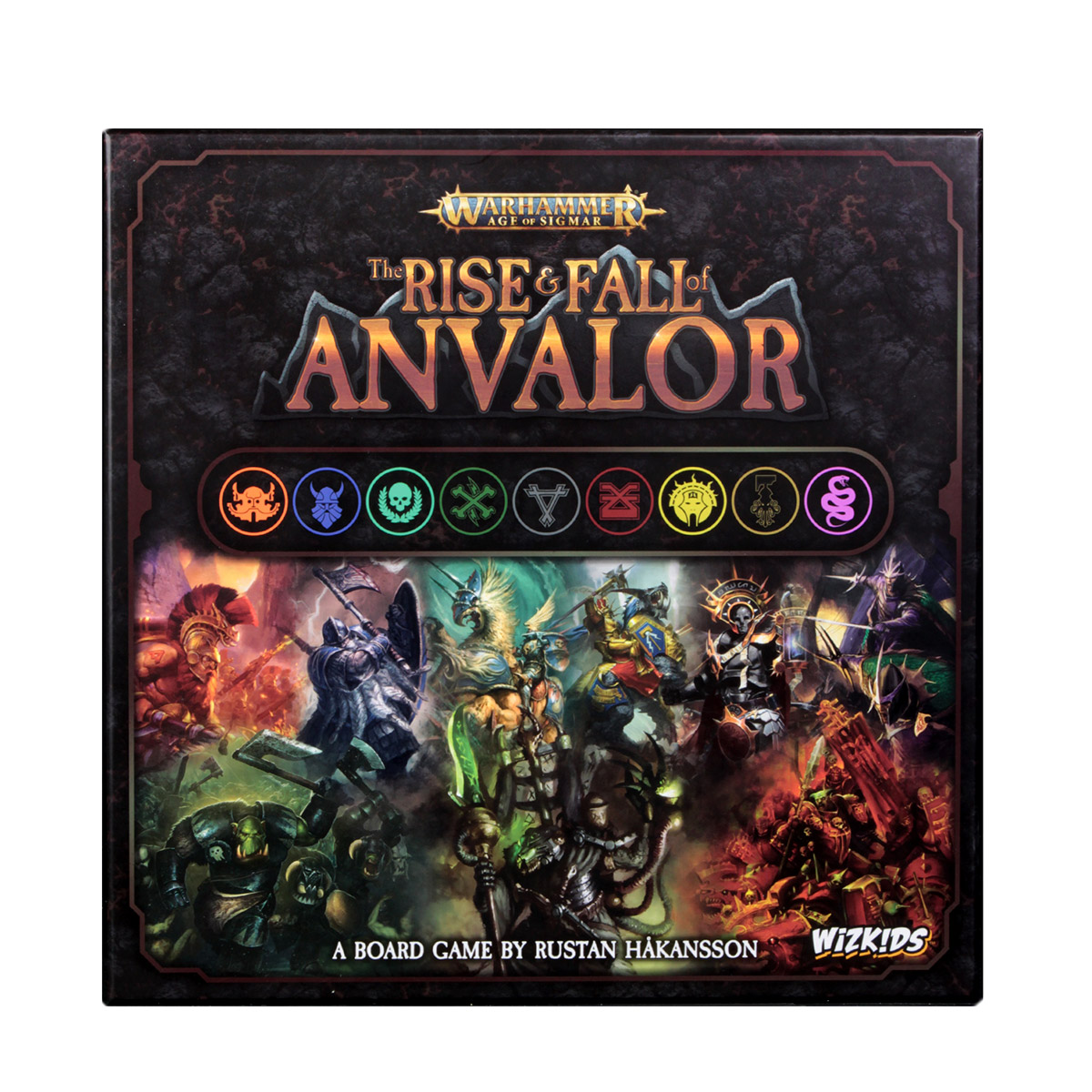 As much as we love pushing our armies around the table sometimes we need a break. Whether its a quick game between rounds or an all day main event, the Goonhammer team can often be found pushing chits, cubes, and cards around a board game. Boardhammer will bring you periodic reviews and articles from the land of hobby board games and wargames not called Warhammer. Well OK, this week the boardgame is also incidentally named “Warhammer” but you get the idea.

Generally speaking, there are three kinds of games in my life:

Sometimes—and this is only during a pandemic or the holidays—there’s also a fourth kind of game: games that my mother will also play. These tend to be simpler board/card games. About the most complicated she’ll go is Settlers of Catan. And some day, there will be a fifth kind, which is games I can play with my son. But he’s three and still working on the whole “being able to follow directions” thing so for now there’s just the three kinds of games and if I want to play a board game during the pandemic, it better fall into category 1.

The good news is that my wife is into games – we play Pandemic quite a lot, and she’s a big fan of Betrayal at the House on the Hill. However, she’s not much of a Warhammer fan; it’s too much of a time/effort investment. So when Wizkids sent us a copy of Warhammer: Age of Sigmar – the Rise and Fall of Anvalor, I knew I’d have a bit of an uphill battle on my hands.

In The Rise and Fall of Anvalor you’re taking on the role of a mighty Castellan in the Grand Order Alliance, in charge of building, garrisoning, and defending the city of Anvalor from the marauding hordes hellbent on tearing it down. The game can accommodate 1 to 4 players (it has a solo mode, more on that later), and each player chooses a faction to command. The factions all have various strengths and weaknesses, plus different commander effects to select. Additionally, one enemy faction is chosen for everyone to play against.  There are three enemy factions—Orruks, Skaven, and Khorne—who likewise have their own decks of threats filled with enemy units that will slowly amass and attempt to raze the city during the course of a game.

Anvalor is interesting in that the game plays somewhat cooperatively; players are ostensibly working together to defend the city from external threats. However, the ultimate goal is singular: Each player is attempting to amass the most influence during the game, even if it means the city is burnt to the ground in the process. There’s no lose condition – you play until the end of the game (determined when the enemy deck runs out of cards and the hordes mount a final onslaught on the city), at which point the player with the most influence wins, even if the city is nothing but ashes. Players earn influence primarily by building neutral city structures and defeating monsters, with stronger monster kills awarding more influence. Other cards like faction structures can help players earn more influence for performing certain actions, buff units, and provide additional resources for building.

Each player turn sees players choosing to build a single unit or structure and adding it to the board. There are three resources: Gold, Manpower, and Stone. Stone is used to build faction structures—the cards in your hand that represent buildings that benefit you alone. Manpower is used to build units: these are cards from your hand that act as warriors, defending the city. Finally Gold is used to build city buildings: neutral structures that earn you Influence and give everyone a boost. Each turn, monsters amass outside the city walls and when enough build up on one side they attack, razing anything in their path unless they are defeated by one of the players’ units.

Enemy units come from one of the three enemy faction decks. Each enemy faction deck has four “Difficulty levels”, controlled by special add-on cards that modify how the enemy deck plays. When enemies attack, they basically move forward until they hit something. If it’s a unit, they fight, and if it’s a structure, the hordes destroy it, so once an enemy breaks through your lines it’s not uncommon for them to raze an entire row en route to moving off the other side of the board. When the enemy deck runs out of cards, the final assault begins and once that’s over players tally up who has the most influence. Each enemy faction has its own quirks, with different ways to kill your stuff.

Initially the game feels like a prolonged building phase. Players amass units and structures, building to block future enemy cards. Once a player builds a neutral city structure (earning influence) or the board fills up with player cards however, enemies start arriving at the gates, and they will break through and raze portions of the city. Maybe the toughest (and most counter-intuitive) element to wrap your head around is the game’s assault mechanic. To put it simply, you’re going to lose units and buildings to enemy onslaughts. If you fill up the board with buildings and units, enemies start attacking until the board isn’t full anymore or the game ends, whichever comes first. This means that in a regular game, you will frequently lose units and buildings to enemy attacks. This was tough at first – who wants to lose units, especially powerful ones? But once we got used to this, the game became much more fun, and it became more about knowing when and how to deploy units.

The game itself is a little daunting at first — it took us a couple of play throughs to get the hang of it — but once you get the basics down, it moves pretty quickly. We were able to get through games in an hour without much issue. In fact, the game moved pretty quickly by our third go around, and we were able to more effectively gauge the benefits of one faction lord vs. another.

The game’s solo mode plays about the same. Instead of trying to amass more influence than another player your goal is to end the game with at least one city tile still on the board, making it much more about strong defense and enemy tile placement. It’s a brisk play once you have the hang of the game and I found it relatively challenging, but not so much fun that I’d opt for it over video games (solo board games are admittedly, not my thing). Still, it’s worth noting that solo mode is very playable and if it is your thing, then this is a good added bonus to have.

There are a few things that don’t work so well in The Rise and Fall of Anvalor; there’s a lot going on with the game that makes the first couple of plays pretty difficult, and the game’s resource mechanics don’t always work well – it’s easy to get stuck with a hand that can’t really play anything early on and end up cycling through your deck for a few turns until you draw enough cards to finally play something. The city tiles can also make this a challenge, since it’s possible to start the game with three city tiles that cost 4+ gold to play, and some factions just don’t have access to that much gold in their decks.

This is also the part where I admit that I don’t have a strong affection for the Age of Sigmar or its lore. I keep up with it well enough to have the basic gist of who the factions are, but at my heart I’m a Chaos player and so commanding the Stormhost does nothing for me. The factions all have distinct units and there are differences between them, but they aren’t different enough that I really feel like they are representing a particular faction on the tabletop. This is not helped by the fact that three of the Order factions are different varieties of Stormcast Eternals.

By the end of our third game, my wife had racked up a 3-0 record and was ready to play again. That she was even interested in playing again is a strong mark in this game’s favor, and being able to pick it up pretty quickly and play a real game in under an hour means it’s likely something we’ll play again. There aren’t enough games that fall into the first category, and when they do, I tend to recommend buying them. Anvalor isn’t the best game I played this year but it gave us an enjoyable time and there’s just enough replayability here to justify the $60 price tag.