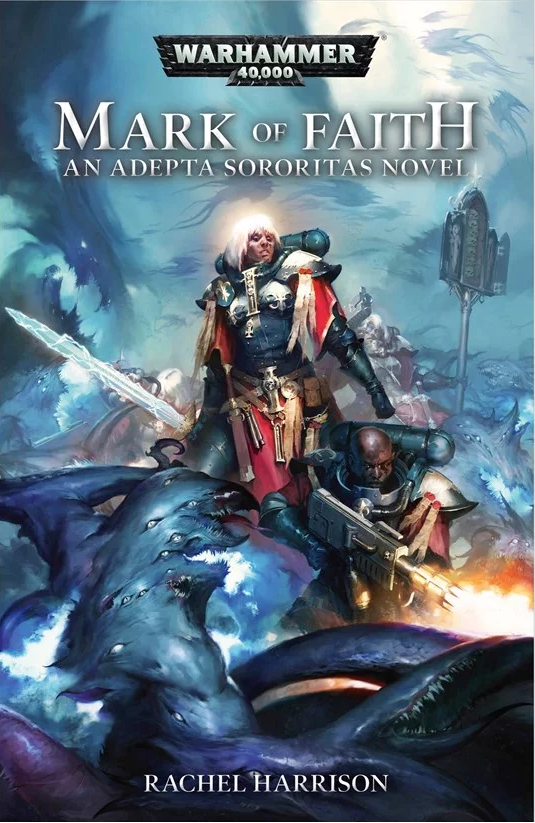 Note: the below contains spoilers for the plot of Mark of Faith.

This is her second full length novel, after Honourbound, and this one leaves the Astra Militarum behind for an altogether different fighting force – the Adepa Sororitas, or as they’re better known, the Sisters of Battle. Where Honourbound featured a rotating cast of point of view characters, this is a more tightly focused book, switching between the perspectives of Battle Sister Evangeline of the Order of Our Martyred Lady and Inquisitor Ahri Ravara. The former is a young Sister who escapes death when Chaos Daemons assault Ophelia VII, holiest of shrine worlds behind Terra itself, and the latter is an Inquisitor of the Ordo Hereticus with a complex past involving a Thousand Sons Sorcerer, whose brutal attack renders her interrogator and lover Sofika crippled, interred in a kind of miniature version of the Golden Throne.

In the past I’ve praised Harrison’s characters and that holds half true here. Evangeline isn’t an especially complicated character – she’s a chosen one who has responsibility thrust upon her, and her personal journey revolves around her struggles to balance her new-found duty with the sense that she is in no way ready for it  – but she’s well-drawn and sympathetic. Her squad of Sisters is more sketched in than worked on in depth, with a couple of exceptions, but they’re perfectly functional as a supporting cast, and there’s a nice sequence where Evangeline meets all her new Sisters in their meeting ground of choice to get to know them better. Ravara unfortunately is not so great. I found some of her chapters hard to get through, and the plot ticking along kind of relies on her being extremely bad at being an Inquisitor. In particular, the twist near the end is painfully telegraphed. I’m usually not a plot guy, and I much prefer that the narrative makes sense than that you get a twist you never saw coming which relies on deliberately obscuring information in an unnatural way, but in this case it’s not great. It’s a shame – the supporting characters in her retinue are all more compelling than she is, and I feel like even just a couple of chapters from one of their points of view might have been a refreshing way to break things up and take some of the pressure off Ravara’s somewhat thin characterisation.

Plot-wise, we move from Ophelia VII (and subsequently the Sisters fleet in orbit above it), on to the Throneworld of Terra, and then through the Warp – straight through the Cicatrix Maledictum –  and on to the shrine world of Dimmamar, homeworld of Sebastian Thor. There’s some great work going on here in filling out the details and making the world feel lived-in. In particular, the two henchmen Yumia and Zoric have tragic pasts which are slowly revealed throughout the narrative, as well as an intimate present which is deftly presented. The opening third also features the dream-stealing Dagra Thul, in a section which is 40k as hell – horrifying and baroque in equal measure. We get some nice details of life on Terra in the Dark Imperium era, and, later, Dimmamar. Some of the strongest and weakest parts of the book exist side-by-side in the middle section, the journey through the Warp. There’s a very real sense of creeping horror as the Unbroken Vow travels through the violent currents of the Cicatrix Maledictum, an even more harrowing journey than regular travel through the Empyrean. To some extent, it makes you wonder at the existence of a separate Warhammer Horror imprint – it’s a real reminder of how horror underpins much of the regular 40k universe, and it’s well-executed. The mounting tension as the ship starts to fail, battered by the tides of the Warp, before the Geller field finally flickers and plunges the inhabitants into darkness, is really well done. Even better, the book features daemons which are clearly Tzeentch-inspired, but have their own thing going on with crystalline limbs and sinister whispers, quite different to the regular Horrors you might be expecting after reading some of the novel-as-advertising offerings Black Library has been lumbered with recently.

Unfortunately this section lets itself down a little with the “final boss” daemon, which reads a lot like someone describing a World of Warcraft raid to you, and not one of the interesting ones. The battle even ends unsatisfyingly, which after a fairly extended action sequence is disappointing, and the resolution contributes to the on-rails feeling of the plot. It’s also around now that it becomes apparent that there’s going to be some pacing issues. By the time all this plays itself out and we reach Dimmamar, there’s a mere 70 pages left, and that isn’t really enough time to get to the conclusion without racing on through. Cue a quick introduction to some brand new characters, woops it turns out they’re traitors, everyone figures everything out in short order and it’s time for a final battle with – you guessed it – the Thousand Sons Sorcerer from Ravara’s past, who is revealed to be named Amenthas.

The actual climax of the book is great, with a much more satisfying action set-piece than the middle one in the Warp, and you can tell this is the part that Harrison was invested in and had really thought about – it sort of suggests the pacing problems come from having a clear picture of the beginning, a firm vision for the end, and some confusion about how to connect A to B which doesn’t quite work out. It’s also refreshing to read a 40k novel where the conclusion is driven not by Big Evil and explosions but by the romantic loves of two characters – the first being Ravara’s for Sofika, which is what drives her on throughout the narrative, and then second is Amenthas’ love for his battle brother Ishilan, who was turned to dust ten thousand years ago. Amenthas desperately seeks to return him to life, and his Machiavellian scheming to do this is revealed to be the inciting incident for the whole plot, right from the pre-book battle which led to Sofika’s injuries. This feels a little bit “just as planned!” but it’s a great character note for Amenthas to be so obsessed with restoring his Ishilan to life that he would destroy someone else’s life to do so. It really speaks to his twisted nature, and is a nicely understated take on Chaos.

With all that in mind, then, where do we stand? Overall, and despite the flaws I’ve highlighted above, I still feel positively about the book. It shares Honourbound’s more mature, thoughtful take on the 40k universe, with a greater emotional range than is often the norm. When it’s good, it’s really good, and there’s some brilliant individual moments and weird, only-in-Warhammer scenes. For a novel marketed primarily on the strength of the Sisters of Battle (so much so that it was released simultaneously with the immediately-sold-out Army Set), it would have been nice for them to get the lion’s share of the time on the page, instead of being split 50/50 with an Inquisitor who does very little inquiring. If I had to go for a letter grade, I’d give this somewhere around a B-. If you’re here for a solid, modern Sisters of Battle novel by one of the better new breed of Black Library authors, definitely check this out. If you’re more ambivalent, this isn’t exactly essential, but still worth checking out – though maybe wait for the paperback (or buy the eBook).