It’s been two months since Games Workshop released a host of updates for Kill Team in their October FAQs, correcting a number of issues with the Compendium teams and making a massive change to Custodes designed to curb the faction’s absolute dominance in games. At the time we felt this was absolutely the correct move. Two months later, it’s time to take another look back at the competitive field and see how things have developed since.

Looking at Kill Team tournament results is in some ways more difficult and more simple than it is for 40k; more simple in the sense that there’s much less list variety but more difficult in that you only see rosters and not how they’re used in games or situationally. It’s harder then to get a feel for how these are played at high levels, and how a player might adapt their fire teams for a given matchup. That said, in this article we’ll be looking at how faction breakdowns have changed at the top of the meta and talk about a few lists from some of the larger events that have happened since the new FAQ was released.

The Events since the New FAQ

When it comes to running actual large events for Kill Team, Spain leads the charge here – even before the current edition’s launch, the Spaniards were at the forefront of competitive Kill Team play, running the largest events, and doing so on a regular basis. The largest event in Best Coast Pairings since the new FAQ was held in Spain – The Major Madrid on November 21st was a 5-round event with 58 players.

In addition to the Major Madrid, today we’ll also be looking at:

Note that we’ll only be looking at results from those last three, and looking at rosters for the first four.

The Impact of the October FAQs

The good news is that the October FAQ had the desired impact – our Custodes-dominated nightmare meta is now behind us, and the result is a refreshing amount of variety at the top of our events. Here’s how the top fours shake out across the seven events in our sample: 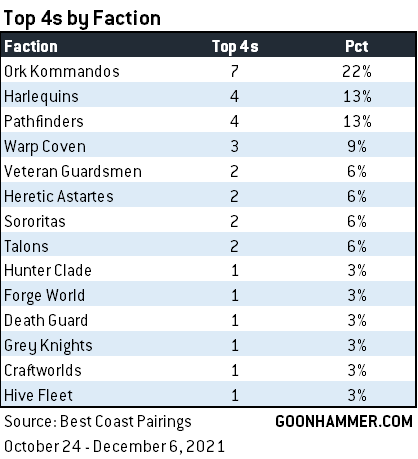 That’s generally pretty healthy, especially given that the Ork results are driven by one event having four Ork Kommando lists finish in the top 4. A few things to note here:

With that said, let’s look at some of the top rosters from the most competitive factions. As always, these come from Best Coast Pairings, and will be visible to app subscribers.

Fernando won the Major Madrid with this list, going 5-0 and maxing out the tournament’s point scoring structure.

This list maxes out your special weapon options but otherwise looks like you’d expect a Veteran Guardsmen list to look; the challenge will be making good use of your specialists and Equipment.

Warp Covens are significantly more interesting to look at because there’s so many ways to build them. David took this list to a 4-0 second place finish at Major Madrid.

David’s list opts to keep more Sorcerers and limit himself to a 6-Tzaangor, 3 Sorcerer list when it comes to the horde option, while keeping himself open for the 3 Sorcerers + Icon + Gunner + Warrior on the more elite side (that Inferno Boltgun likely gets the High-Capacity Magazine Equipment when it’s in play). Otherwise there’s pretty much every flavor of sorcerer here.

One reader who knows David was kind enough to speak to him about the list and translate his thoughts, which we’re presenting here:

David: Even if the roster has many sorcerer [options], I end up using mostly the same 3

The third one being the most important – I make him the leader, as it’ll be the least exposed. Depending on your matchup (vs high AP, snipers or mirror), you can consider the 5+ ward talisman sorcerer.

Usually Cristalline and empiric ward are my best options for the leader. Patron of destiny, time walker and warp spell are also good for the other 2 sorcerers. I usually equip them with Arcane robes, to reduce incoming crit damage, best used in those cases where crits deal 2 oe 3 more dmg than the base dmg like drukhari rifles or power weapons. I’ve also used the scroll but only if I’m really going to need an extra doombolt, fluxblast or portal.

To fill up the roster I use a maximun of 2 rubric marines, usually taking the soulreaper and icon. A good strategy is to deploy in range to have the sorcerer send the soulreaper via portal to a vantage position and punish your opponent. I use a minimun of 2 tzaangors (champion and one with blades), though against tyranids, Ork Kommandos, veteran guardsmen, harlequins or talons I usually use 4 or even 6 tzaangors.

I usually start the turning point using the Physic Dominion strategic ploy and casting Ephemeral Instability to reduce their charges and their overall movement.

Ryan took this roster to a 4-0, 1st-place finish at the Killzone event, finishing just ahead of another T’au list.

This is basically identical to Mark Amos’ 2nd place Pathfinder roster. You get 1 Shas’Ui and 12 operatives here and you’re almost certainly going to have two weapons experts to double up on the rail/ion rifles, you’ll take a marker drone in almost every game, along with a transpectral interference operative to get more out of your shooting, plus two high-intensity markerlights from the Equipment list. After that it’ll depend on what you’re up against, though generally the Pathfinder List operates by markerlighting the hell out of 1-2 targets and then just removing them systematically from the table.

John took this to a 3-0 first place finish at the Warhammer World Kill Team matched play event, though he was one of four Ork Kommandos players to do so.

Unlike most of the other kill teams we’ve seen options for, Kommando kill teams are fairly straightforward, since of these 12 operatives, 10 will be used in each mission. The real choices you’re going to be making here are whether you think another Kommando Boy will be more helpful than a specialist, likely to mean the Slasha Boy and Burna Boy in these cases, since they’re short-range specialists.

Rounding out our rosters is a Harlequins list, which Victor took to a 4-1 3rd-place finish at the Major Madrid event.

A Troupe list gets one leader, two gunners, and five warrior operatives, so it’s really just picking the special weapon and melee loadouts you’re going to want for the matchup here. The caress is for more elite targets where you need to do additional damage (since your profile is 5/6 vs. 4/6 with balanced for the blade), and likewise the fusion pistol will be the option against most heavy infantry as well. The Neuro disrupter will be for when you prefer to put a little more range between you and your target, though it lacks the raw damage of the fusion pistol and with movement values of 3⬤, how close you get to an enemy will usually be up to you.

That wraps up our look at the top rosters of recent events. Join us in another month or so when we’ll look back at how the meta has shifted and the impacts of any new rosters that have been released. So far with the exception of Harlequins and Custodes it seems like the new rosters from Chalnath and White Dwarf are playing very well and seem to have an edge over the compendium rosters, though they’re also seeing much more play generally. The good news is that there are enough of them that it leaves us with a pretty healthy environment.