Ruleshammer: Detachments and Stratagems – what are they and how do I get them?

Although we love Warhammer 40,000, the game’s complexity can be daunting, particularly for newer players. In Ruleshammer, we look at the nuances of the game’s rules and how they affect gameplay, clearing up potential issues and helping make sense of some of the game’s less common interactions. In today’s Ruleshammer, Rob “Vre’kais” Chilton is looking at Detachments, Stratagems, and army building.

This week’s Ruleshammer is perhaps more beginner-focused than others, but the detachment system has seen some changes and quirks since its first inception at 8th’s debut, and we’ve gotten a number of questions over the last week about tackling this particular topic.

I need my army to be Battle-forged, how do I do that?

Most matched play missions (and all competitive events) require you to field a Battleforged army. In its simplest terms this requires two things:

What are Army Factions?

An army faction defines which collection of units that are going to be used in your army based on the Faction Keywords they have. There are a few different levels of Army Faction, and if you’re playing in Matched Play, some additional rules that govern how you can build Detachments using Faction Keywords. 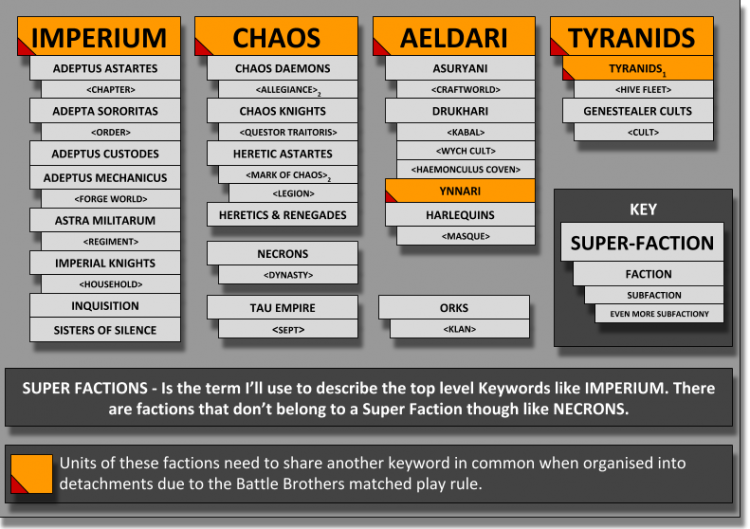 Broadly, we can think of these in three levels:

I think this chart covers most faction choices; however making it probably took longer than the rest of this article and knowing GW there’s probably some I’ve missed. My apologies if your favourite army is missing – I promise that it wasn’t intentional!  All the units in every detachment of your army must share one faction keyword; it could by Imperium it could be Astra Millitarum, it could be a particular Chapter of Space Marines.

All of the units in a matched play army, with the exception of those that are UNALIGNED, must have at least one Faction keyword in common (e.g. IMPERIUM or CHAOS), even though they may be in different Detachments. [40k 8th Edition pg214]

If your army is Battle-forged, you automatically start with 3 Command Points (CP) and access to the game’s four universal Stratagems (Command Re-roll, Counter-Attack, Insane Bravery, and Prepared Positions). More on those in a bit.

What is a Detachment?

A detachment is a collection of units (some that might just be one model) organised to fit a detachment template. There are a selection of different detachment templates to choose from roughly fitting in three types. Each one gives you a number of Command Points (CP) that can be spent on Stratagems before and during the game. 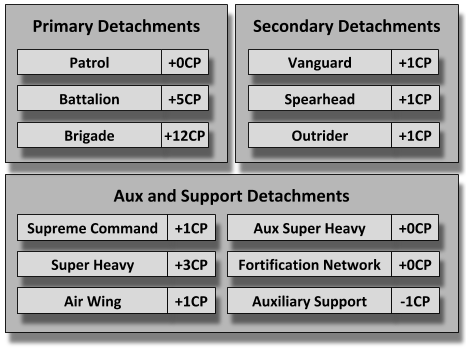 Each detachment has some mandatory slots you have to fill, like an HQ or some Troops, plus varying numbers of free slots you can fill with additional unit choices. More details on these can be found on pages 243 to 245 of the Warhammer 40,000 rule book. The CP bonuses I’ve listed here have been updated to reflect the latest FAQs. When building an detachments, you need to decide which faction you are using for the detachment – this is the keyword that will be shared by every unit in the detachment, though note that there are some limits to which keywords you can use in this way:

Battle Brothers – All of the units in each Detachment in your Battle-forged army must have at least one Faction keyword in common. In addition, this keyword cannot be CHAOS, IMPERIUM, AELDARI, YNNARI or TYRANIDS, unless the Detachment in question is a Fortification Network. This has no effect on your army Faction. [CA2019 pg60]

As such there’s a few things to note when picking factions for Detachments from that first chart;

Once all your units are organised into detachments, and those detachments all share a Faction Keyword, congratulations – your army is now Battleforged! Here’s an example of a Battle-forged army made with a collection of detachments. 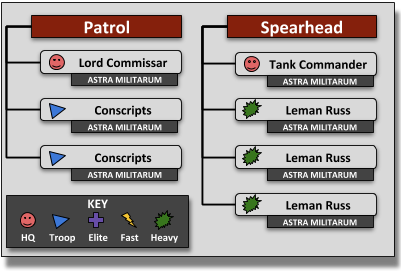 You can take any combination of Detachments you want but CP are a valuable resource so bear that in mind. While there are no official rules limiting detachments note that Matched Play rules for Organised Events put two further restrictions on Detachment building:

These aren’t official rules for all Matched Play, but you’ll likely find that players adhere to these even in casual games.

CONGRATULATIONS, YOU ARE NOW BATTLE-FORGED… Now What?

Some subfactions have abilities you can use if the entire Detachment contains models that share the same Subfaction keyword. These are often a choice for most of the units in your codex, keywords that you replace on each unit such as <CHAPTER>, <HIVE FLEET>, or <SEPT>. Taking a Detachment that is wholly made up of one of these subfactions often grants the units in that detachment an ability (with some exceptions such as Chaos Cultists or Tau Kroot, check your codex to determine who gets these benefits). 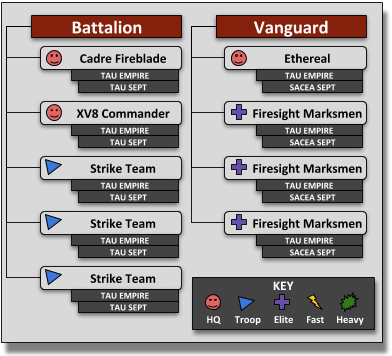 Notice that these detachments each have different subfactions. This is still a legal army because the whole army shares the T’AU EMPIRE keyword. The units in these detachments would respectively get the abilities of each of these Septs as shown on page 127 of the T’au Empire Codex, but doing this does come with some limitations. There are abilities in the game that are locked to the subfaction of the model/unit using it; if we take Tau as our example again, the Saviour Protocols ability can only be used to protect units of the same <SEPT>.

When resolving an attack made against a <Sept> Infantry or <Sept> Battlesuit unit whilst that unit is within 3″ of a friendly <Sept> Drones unit, if the wound roll is successful, you can roll one D6; on a 2+ that Drones unit suffers 1 mortal wound and the attack sequence ends.

This ability would require both the Drone and the unit they are taking damage for to share the same <SEPT>. Another notable example is Transports which can usually only carry models of the same subfaction, for Tau this at the <SEPT> level as well, for Space Marines it’s <CHAPTER>, and so on for other factions.

You can combine units in detachments in a wide variety of ways, often bringing in units from several codexes. See below for an example of a Chaos Khorne army using both Chaos Space Marines and Chaos Daemons. 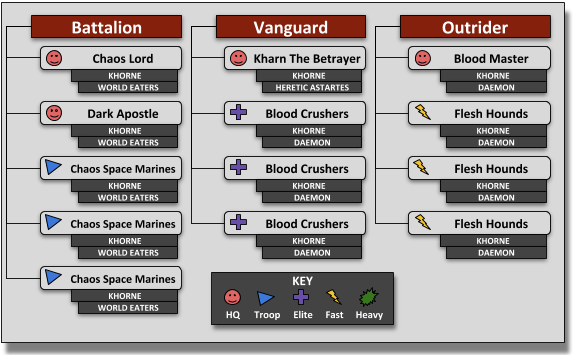 Some armies have recently gained the ability to create custom sub-factions. Notable examples are Space Marine Successor chapters, but also Tyranids, Genestealer Cults, Tau Empire, Astra Militarum can now form their own custom Hive Fleets, Septs and Regiments, respectively. You can name them whatever you want but what defines them as a single subfaction is which traits you pick for them, and so far it’s a choice of two from a list of options. You can name these subfactions whatever you want but giving two different custom subfactions the same name doesn’t allow you to circumvent the limitations of subfaction-locked abilities.

I’ll note right here though that if you take two detachments with the same custom subfaction name such as <Ruleshammer Sept> but choose a different two traits for one detachment than the other, they are still two different subfactions. Any abilities you might have such as Saviour Protocols, would only work for the units of the same sept (those with the same traits). Trying to do funky things with your subfaction name has been FAQed

Q: If I create an Astra Militarum Regiment of my own and name them, for example, the ‘Emperor’s Finest’, and I then also create an Adeptus Astartes Chapter of my own choosing, and also call them the ‘Emperor’s Finest’, do the abilities that work on the and/or keywords now work on both the Astra Militarum and Adeptus Astartes units?

Custom subfactions for Space Marine armies using Supplements work slightly differently to other armies. When you create a Successor Chapter for Marines it has to pick a founding chapter such as Ultramarines, Raven Guard, etc. This doesn’t give you that founding chapter’s ability though, we’ll cover what it does do in more detail later on.

Okay so I have a battle-forged army. Which stratagems can I use?

The majority of older codexes grant you access to subfaction-specific stratagems with the rest of the faction stratagems; that is they require you to just have a Subfaction unit to use the Stratagem on to be useful. So if you created a Detachment with a Sa’cea Sept Ethereal in it and  2 units of T’au Sept Fire Warriors, you would be able to use the Sa’cea Sept stratagem and the T’au Sept one, though this detachment would not gain any Sept abilities as its subfaction keyword is not shared by all units in the detachment.

If your army is Battle-forged and includes any T’au Empire Detachments (excluding Auxiliary Support Detachments), you have access to the Stratagems shown below, meaning you can spend Command Points to activate them. These help to reflect the unique tactics and strategies used by the forces of the Tau Empire on the battlefield. [Tau Empire Codex Pg128]

Keywords are the criteria for access for most stratagems, Chaos Space Marines have a selection of Stratagems for their Legions and a second set for their Mark of Chaos. This leads to a lot of flexibility in what an army might be able to use, our Khorne army from earlier would be able to use Chaos Space Marine, World Eaters, Daemons and Khorne Stratagems from across 2 codexes.

Newer expanded Stratagems for some subfactions require you to have a full detachment of that subfaction to unlock it.

If in doubt check your Codex or Campaign Supplement; the criteria for using each set of stratagems is described on the first page of the stratagem list.

Whilst most factions with custom subfaction rules don’t have any stratagems specific to them (they can still use any that their other Faction keywords would allow) Space Marine Successor chapters are different, because Space Marines have to be whenever possible. Remember how we said that they also have a founding chapter, if that founding chapter was for instance ULTRAMARINES then they gain access to all the ULTRAMARINES Stratagems, Relics, Psychic Powers and Objectives.

There is another quirk about this though. Space Marines supplements come with special Doctrine abilities, if your entire army is made up of detachments of the same successor chapter then you gain the Founding Chapters Doctrine bonus. See below for the exact wording of this from the Ultramarines codex, pg72.

Note that all the detachments in the army need to be the same chapter for this to be unlocked.

Is this the end?

This article has given you a crash course in detachments and battleforged armies, 8th edition has some unique ways that armies are best fielded, some have special detachments or special rules for certain detachments. The codexes and the FAQs should guide you well from here into more advanced games.

Also if that Chaos Khorne army is the worst thing people have ever seen, I really am sorry. (Editor’s Note: I’ve seen worse)


As always, if you have any questions or feedback, feel free to drop a note in the comments below, hit us up in r/ruleshammer on reddit, or email us at contact@goonhammer.com.