It’s been a while! Now that NOVA’s over we’re back in the saddle with the Dawn of War II retrospective for the second, final, and most important expansion, Retribution. This is pretty much the final form of the Dawn of War series — or, at least, it’s the high water mark after which the tide rolled back.

A couple things separate Retribution from both base Dawn of War II and Chaos Rising right off the bat: first, we’re no longer following the trials and tribulations of the unnamed protagonist Force Commander from the first two games. Not only is the Space Marine protagonist now named — you play as Chapter Master Kyras’s hapless patsy, Apollo Diomedes, instead of a silent self-insert — but you don’t actually have to play as the Space Marines! There are six factions you can play in the single-player campaign, from the Space Marines to the Eldar to even the Tyranids, and the change is welcome even if it is… somewhat superficial.

More importantly, the gameplay has changed significantly. Instead of focusing entirely on hero play, Retribution brings back at least some of the things people loved about the original Dawn of War — larger resource management, non-hero buildable and commandable units and vehicles — and works them into the greater Dawn of War II formula. The few times that the original Dawn of War and the Chaos Rising expansion did this it was awkward at best — controlling two Predator pattern tanks in the final mission of the base game with hacked-together bespoke mechanics was more awkward than fun, especially since it was just a makework prologue to the real meat of the fight.

Not so in Retribution — bringing non-hero units into the fight is so important that in the campaign you’re given the option to replace your non-leader heroes with “honor guard” alternatives. Don’t like how the Tech-priest in your Space Marine hero retinue is performing? Swap him for a veteran Dreadnought that gets bonuses from that Tech-priest’s skill tree, based on how much you’ve leveled him up. Generally speaking, the honor guard replacements are better blunt force objects while the heroes reward better micro play; both have their very potent uses out in the field. 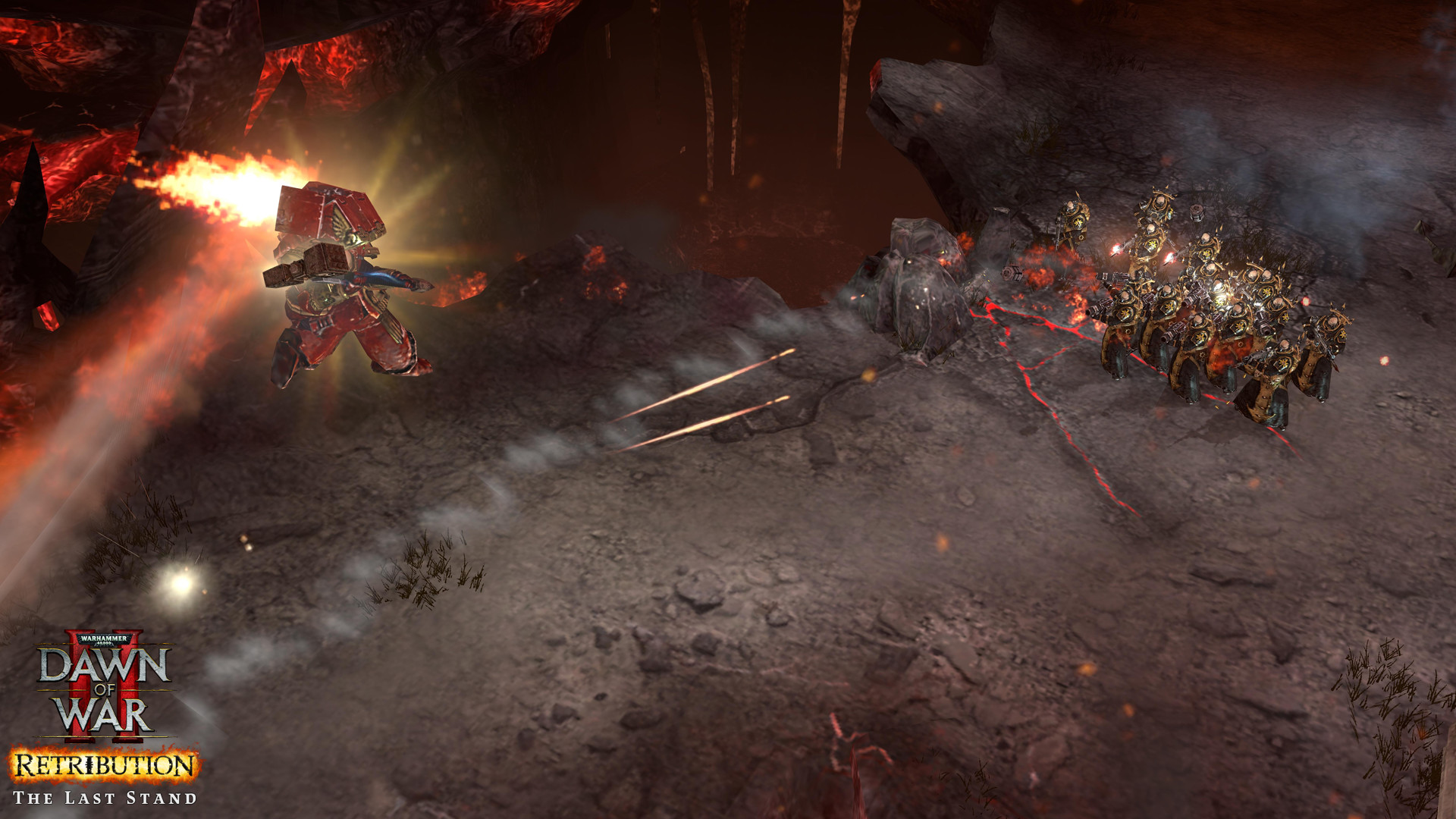 Out in the field, of course, you’ll be able to summon more units to the fight as well. Requisition and Power are both back as resources in more or less their original Dawn of War sense, as well as the supply cap; the main difference is that when a unit you’ve bought with Requisition or Power dies, those materials are refunded to you so you can either build identical replacements from the nearest control point or change up your strategy entirely. There are two main inflection points that make Retribution more interesting than its predecessor, and being able to freely choose your force composition is the more persuasive of them; there are simply more options on offer for the player than whether to leave Cyrus behind or use him.

The other is the diversity of faction choice, and how it affects wargear. Wargear drops retain their Diablo-like properties in Retribution, but there are far fewer of them; recycling trash drops is no longer an integral part of the progression mechanic but a rare boon to help push your heroes over the finish line to the next level, or otherwise help your progression — a number of drops explicitly exist to be recycled at a point in time of your choice, earning you the next level in your overall faction tech tree (another new feature of Retribution that comes along with having non-hero units running around out there). The wargear you keep is incredibly powerful and changes how your heroes work on a basic level even more so than it did in the base game, because each hero no longer has an attendant squad — for instance, your heavy infantry hero who switches between a boltgun, a plasma gun, and an emplaced heavy bolter now represents the full output of that hero unit, instead of having three guys with regular bolters or heavy bolters still backing him up. This applies across all the factions, with similar diversity in role (though basically all the factions have the Faction Leader, the Heavy Weapons Shooter, the Melee Combatant, and the Caster as archetypal roles).

This gets to perhaps the downside of Retribution as a single player product, which it is now: the campaigns, despite having fully-voiced content — well, mostly fully-voiced; the game seems to find excuses not to have a voice actor for at least one hero in each of the single player factions, which is at its most egregious for the Eldar, when you pick up a Farseer as your caster-type hero and she never says anything or is ever referred to again — are all pretty much the same. You start on the same planet each time with the same intro mission, and proceed through the same series of planets to the end of the campaign, with the only changes being to the words being said over plot events. That’s fine, frankly, for expansion content; this far after the fact, though, it leaves a wanting feeling given that they’d finally figured out the proper formula. This is the way Dawn of War II should have been from the beginning. 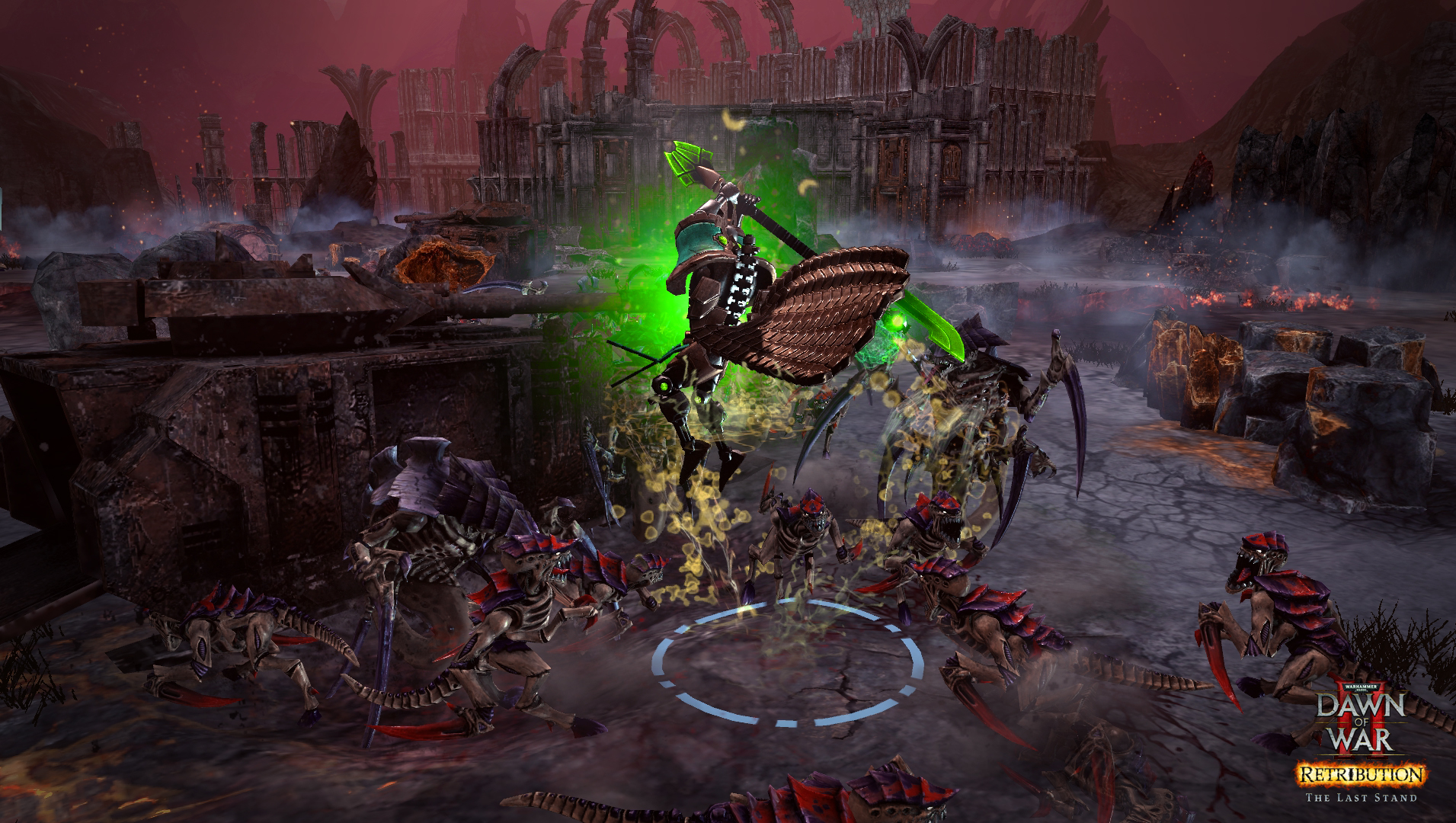 Final Verdict: It you get any of these games in 2019, this is the one that’ll do the most right by you. Especially if it’s in a bundle; buying it alone is still $30. If you can find a good multiplayer group, it’s an even better investment, but these things go on sale from time to time — it’s a good $30 game, but you won’t have to pay that much over a couple weeks in winter and summer.

In the end, if “there’s not enough of it” is the most substantive critique you have of a game, it’s doing basically everything right. Retribution finally delivered basically everything fans would have wanted: all the right units in the right, most focused package, without games that lasted too long or got bogged down in too much old-school RTS stuff. If the only problem is that it only gives you sixty hours of content if you play it once for each faction, well, for an expansion pack, that’s a success. You’d just wish that when Dawn of War III happened, they’d have picked up right where Retribution left off and delivered a product that iterated on and expanded upon the previous concepts.

That’s not what happened. We’ll discuss what did happen next week.