Ghost of Tsushima Is a Fantasy Game, But a Good One

I did not think I’d be back here reviewing an open-world fantasy game again so soon after The Witcher 3.

That’s what Ghost of Tsushima is, of course, and it’s important to get it out of the way early: despite having neither explicit spellcasting mechanics (or rather, recontextualizing them as genre-appropriate low-tech grenades and the like) nor strange and fantastical creatures for you to meet, greet, and slaughter (though this is as thorough a caricature of the Mongols as you’re likely to see these days, given how little they resonate in the Western historical canon of Big Bads), this is very much a fantasy title crafted in a very specific genre mode. You are a dramatic fictional hero in a far away, ancient idyllic land that never existed, able to kill ten men as easily as look at them, kick two hundred pound men in armor ten feet into the air, and deeply beloved by the adorable hopping foxes who populate the island. These foxes are revered by the locals and are purveyors of mystical power in the forms of charms, the blessings of the gods (passive buffs; you know the drill).

The island of Tsushima certainly exists, and was certainly invaded by Mongols in the late 13th century, but that’s about where the history ends. The game is based on the first invasion, in 1274, but the entire historical battle took place essentially on Komoda beach — when the samurai fell there, it was on to the island of Iki, and then the mainland, where…well, this isn’t a history lesson, but the Mongols came and went essentially by their own lights, retreating after a decisive victory at Hakata Bay to prepare a second, larger invasion.

Not so in our fantasy game, where the island of Tsushima is so important that the cousin of Kublai Khan, “Khotun Khan,” has come to ensure that everything goes smoothly and earn enough of a name for himself to take his cousin’s place at the head of the Mongol Empire — making Tsushima the most important breakpoint in the entire invasion, the linchpin of the evil horde’s attempt to reach beyond their grasp. Let’s pause for a word from Sucker Punch’s director, Nate Fox:

“This is a game that is entirely grounded in reality,” says Sucker Punch director Nate Fox. “We’re trying hard to transport people to 1274 Japan. We’re inspired by history, but we’re not building it back stone by stone. We’re not trying to rebuild Tsushima island. Our protagonist is a work of fiction. We actually thought about using some historical figures, and we asked some people who are more culturally aware than us and they said that it would be insensitive, so we didn’t do it.”

It’s wise not to use real historical figures for sensitivity reasons, but one suspects those weren’t the only ones at play. Ghost of Tsushima is interested, first, foremost, and somewhat obsessively, in the mythological conception of the samurai. So the governor of the island — occasionally called the Japanese term jito for that position, but never “governor” itself due to the associations that word has in the West — is an imposing central casting samurai lord named Shimura who spends quite literally the entire game banging on about honor, the way, the code, and so forth. We are spared any examination of his administrative skills or how he does his day job (we can assume he’s quite bad, since he’s recently had to put down a rebellion — though this too is played solely for noble-focused dramatics), because the fantasy has moved us past this into the liminal space of brave, chivalrous knights defending their homeland against an invading Asiatic horde. Wait, crap. Wrong mythology! This particular horde is coming from the west, instead of the east. 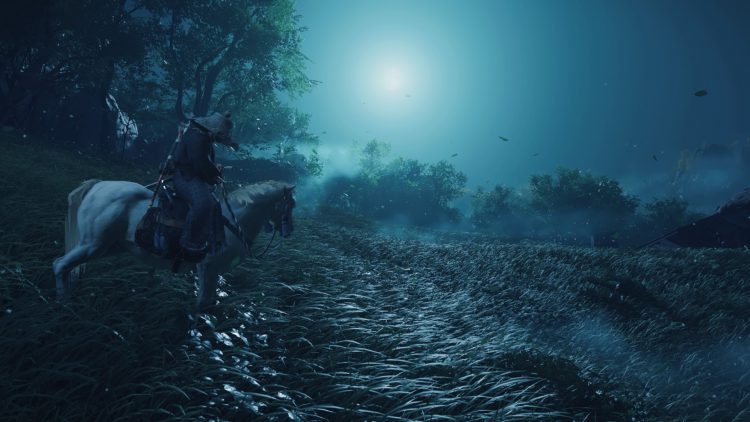 So long as you’re aware that most of that Fox quote (in fact all of it, beyond “Our protagonist is a work of fiction”) is, to put it kindly, pure marketing material, there is a lot to enjoy in Ghost of Tsushima. It is if anything an imperfect inverse Witcher 3 — whereas that game was a masterpiece of mood, story, aesthetics, and character holding together some fairly unimpressive combat and gameplay mechanics, Ghost is a masterpiece of mood, combat, aesthetics and gameplay holding together some fairly unimpressive story and character work. In both cases, the lacking characteristics aren’t bad per se, and they’re more than adequate enough to get you through the parts where they’re the focus back to the stuff that really pops about the title…but they’re not why you’ve booted up the game.

Where Witcher 3 and Ghost of Tsushima most directly overlap — and why I think Sucker Punch quite wisely took some lessons in art design from CD Projekt Red over the course of their development — is the use of lighting and contrast in creating natural scenes. Part of this was absolutely necessary to achieve an even somewhat-interesting version of something the studio desperately wanted to ship with the game, the so-called “Kurosawa Mode.” To describe it bluntly, it’s a black-and-white filter with some cheesy fake Old Timey Film tearing and staining to kind-of sort-of make you think you’re watching one of those great old samurai films, like Kurosawa-san used to make. I was not particularly impressed by it in the very short time I spent using it; I was doubly unimpressed with the decision to slap Kurosawa’s name on there, no matter what his estate said, and I turned the thing off for good when I realized the game had handed me a sidequest that required me to note and follow the color of specific flowers. No, there does not appear to be any additional hint for the Kurosawa Mode player on how to do that, except that if you run into the flowers by accident, our hero will note their hue. 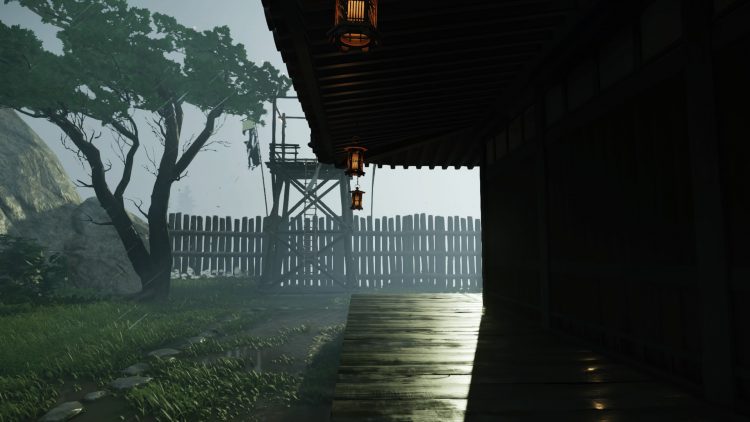 So turn that nonsense off and you’re treated to an absolutely phenomenal show. The contrast that’s necessary to make a black-and-white game not completely a washed-out mess works even better in color, especially with the eye to color that Sucker Punch applies here. If I had a criticism of the first ten to fifteen hours of The Witcher 3 it was that they were having me traipse around sumptuous, aesthetically perfect bogs, and sumptuous, aesthetically perfect bogs…are still bogs. Not so in Ghost, where green and golden forests punctuated by rolling white-grassed plains are your starting biome (you get to the bogs later, on the middle second of the island). It’s an accomplishment made all the more impressive by it running fantastically well on my base PS4, though I’ve heard some complaints about the Resolution mode on the PS4 pros absolutely tanking frame rates. Not so on the base model; it does all the technical stuff quickly and correctly, with very fast quick travel and very little framey clunkiness.

There are some sacrifices that are obviously made here in the name of that performance; most notably, some textures, especially rocks and bridges, have nowhere near the fidelity you’d expect out of a cutting-edge end-of-generation console exclusive; they’ve settled for a slightly more cartoonish approach that fits the aesthetic well. Additionally, there are some rather severe draw distance limitations; get high enough up on a mountain and look down and far away, and you’ll see large stretches of field where grass should be but isn’t, replaced instead by a matte green or white color swatch. There’s a reason most people taking the incredible shots that the game’s photography mode allows do so of horizons, ridgelines looking up, or the close and middle distance, rather than, say, Skyrim’s great and vast surveys of all the light touches. In my opinion it’s a small price to pay for the routinely arresting visuals the game serves to you while you’re just casually riding about on your horse.

The stuff that gets you off your horse — combat with the invading Mongols — is just as good. When watching promotional material I was worried that the game would be siloed too hard in its distinction between “Samurai” combat and “Ghost” assassination; this is not the case. You move fluidly from one to another, and all your armor does is change what passive modifiers you have at that moment rather than closing off playstyles. This leads to you having…a lot of options in combat, and getting through the menus for all that can present a bit of a learning curve, since there are four distinct sword stances, four distinct bow or bow-replacement weapons (each of which has an ammunition sub-menu) and three distinct Ghost weapons that map to R1 instead of the throw menu. Time slows down while you’re in the menus, though, and a recent patch added a “Low Intensity” difficulty mode if you really need space to learn the controls or just want to breeze through for the story. The heart of this game lies in its incredibly well-put together combat, though — the default mode will give you a challenge but isn’t up there with a Sekiro or a Nioh, while higher difficulty levels will push you. And by the time you’re done, you’ll have enough tricks up your sleeve to kill an entire Mongol outpost with, I don’t know, wind charms alone. 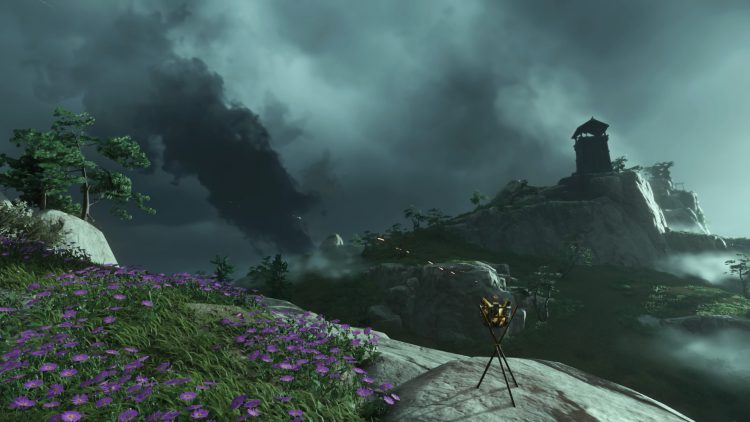 If you are playing through just for the story, well…it’s not actively offensive. Sometimes it’s quite enjoyable! There’s some good stuff in the side missions, and my main worry — that our hero Jin Sakai, a noble samurai forced to resort to cowardly acts to even the odds against the Mongols, would spend literally the entire game in maudlin complaint about his own lack of honor — has mostly been mitigated, though it’ll kick up again at plot-appropriate times. Jin is likeable, just about everyone else in the game is suitably unlikeable as the genre demands of them, and the voice actors do good work. But I play with the English voice acting, of course, because this is not actually a Japanese game. This is a Western fantasy game made by Westerners who were fans of a Japan that exists somewhere between their heads and an amorphous cultural consciousness. Ghost of Tsushima is many things, and many of those things are very good…but if we’re being honest, the characters are always speaking English. That’s what they did in those old-timey dubbed samurai flicks, after all.

Worth the buy if you own a PS4 at its list price of $60, but not worth picking up the console for if you don’t already own it. Hopefully it will eventually get ported to PC, but there are some weird touchpad-only controls in the game that might stand in the way of that. Good news if you’re planning to buy a PS5 though: this will be backwards compatible and also likely available in short order with an HD remaster/upgrade of some sort, and it’ll look even prettier on the new hardware.