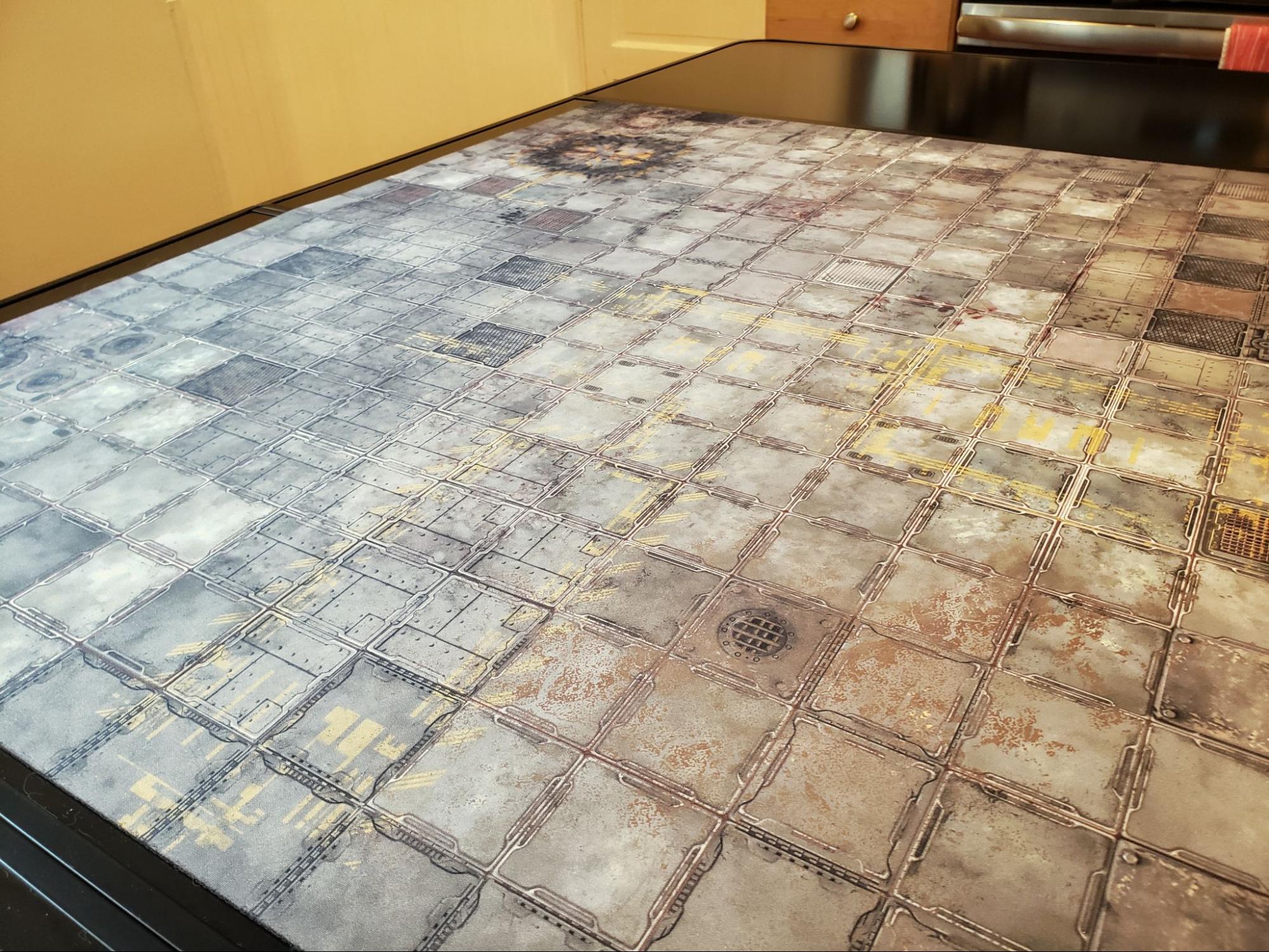 Although relatively new to the scene, Skirmish Mats have been making a big splash with their beautiful mats sized for skirmish games and their excellent mission statement. We’d previously been in touch with them about prize support for the Goonhammer Open, and in addition to providing mats for the Narrative Event’s winners, they sent us a set of mats to review.

A good gaming mat really ties the warzone together. It transforms plastic figures on the kitchen table into harrowed warriors in the grim darkness of the 41st millennium. So how well does the Crumbling Courtyard from Skirmish Mat set the stage for warfare?

The first thing I noticed about this mat was that it was shipped to me in a standard triangular  cardboard shipping box (think of a big Toblerone) with a couple rubber bands holding it rolled up, the printed invoice and a sticker tossed in the box, and that’s it. Maybe I’m just jaded from Amazon packages, but I hate having packages delivered to me that are the product inside a box, shrink-wrapped, inside a second box, surrounded in bubble wrap, in a third box. The less waste, the better. I don’t know whether or not this is how they ship retail products, but I nonetheless appreciate it.

I did however notice there is no carrying case for this mat. While that’s not a deal breaker for my hobby room, it’s mighty inconvenient for transporting. 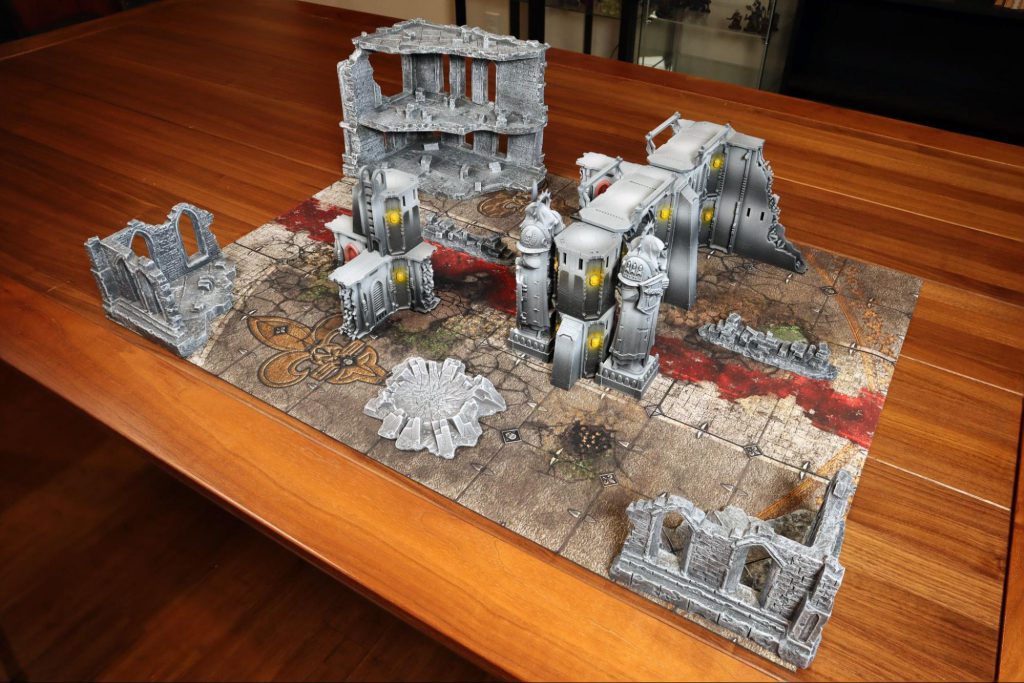 For the material quality, this neoprene mat is fairly thick. My calipers tell me it’s precisely the advertised 2.5mm (or 1/10th inch) thick, which is actually a little thicker than my mousepad. No odors, oils, or frayed edges. Pop it out of the package directly onto the battlefield.

The other critical aspect of a mat is the image quality. And this is another area where the mat exceeded my expectations. The colors are vibrant and lines are crisp. I did notice that the mat was a bit shinier than I was expecting, but not to a level that it’ll affect a game. It only really came up when I was blasting it with stage lights from two feet away. In comparison with other neoprene mats, I think the high image quality itself stands out. But don’t take my word for it, compare these yourself.

There are some downsides, however. Despite this mat being advertised as 22”x30”, I measured this mat to be 22”x29.5”. Does that missing half inch bother me? Not really, but it is kind of annoying especially given this mat is toted to be a premium product and carries a premium price. If you are setting up ultra precise tournament boards this might be a concern for you, but in a casual setting, you absolutely won’t notice the difference.

One of the selling points to Skirmish Mats is that the corners of the mats are not rounded. While this does let you get precise corner measurements, I worry that these corners will fray sooner than they would if they were rounded. There’s no evidence this will happen though; the mat is in great condition and seems fairly durable. And the crisp 90 degree corners are worth it, especially if you plan on getting two and laying them next to each other. They’re great.

My mat was delivered in a cardboard tube that my toddler immediately claimed, so from a packaging and child entertainment perspective that’s definitely a win. As with Pendulin I would have preferred a carrying case, but in a pinch I’ll drop $15 on a blueprint carrying case or something equivalent. Although marketed at 44” x 30”, the mat I received was 43 ⅞” x 29 ⅞”, so it was slightly undersized but I’d say that’s well within the tolerances of this sort of product and it shouldn’t pose a problem. The build quality is phenomenal and is equal to the thickness of my FLG and F.A.T. Mats. Whether or not the edges fray like the other mats is yet to be seen, but without any kind of edge sealing I suspect it’s going to happen. Where Skirmish Mats shine is in how vibrant and rich the printing is. Pendulin’s picture is a great comparison, but in person the difference is even more intense.

The mat I received was the “Industrial Zone” with a grid of approximately 2” x 2” squares. I say “approximately” because the scale is slightly off; in the image below you can see how it looks compared to a 12” x 12” Games Workshop floor tile; while aligned on the right you can see on the left hand size that the end of the sixth square on the mat isn’t the same as the end of the tile. This might be problematic for an obsessive-compulsive who wants their Zone Mortalis stuff to fit perfectly, but if you just want to create an industrial warzone for Sector Mechanicus Necromunda games it should be fine.

The edges of the mat also aren’t perfectly aligned with the grid, unlike how it is shown in the product image on-site, which can be problematic if you want to merge two mats together and play a larger game on a 44”x60” table. This is just the nature of the manufacturing process and the tolerances of cutting something to this scale. I would say the Industrial Zone Mat is preferable for smaller games where you won’t need to bring multiple mats together. For larger tables I would either wait and see if Skirmish Mats releases a larger product or stick with a printing that isn’t patterned.

Like taller Kevin, my mat was also delivered in a sturdy cardboard tube. As someone who has played a lot of 3D Necromunda games on a single color textured table topper sheet, I was excited to give this mat a go! The printing and build quality is top notch. It’s sharper and more vibrant than my FLG & F.A.T. mats, and on par with a Mats by Mars vinyl mat – definitely a feat for neoprene. The design is a nice riff on the Zone Mortalis sort of motif – but would also fit right in for a Zona Alfa or Stargrave table.

Size-wise, it’s just about a half inch short of 36”x36”. For any of the games I’d use this mat with, that half inch definitely will never matter. Like the above reviews, the lack of a case is a bummer, especially as I’m definitely going to bring this to the game club for our Necro campaign in the Fall. 3’x3’ is a great board size for Necromunda; just cram the terrain you’d put on a 4’x4’ onto there and enjoy the chaos.

Compatibility with Zone Mortalis tiles is an exceptionally minor gripe here. The squares on the Skirmish mat are ever so slightly larger, meaning that a tile won’t exactly match here. That said, if you have a terrain piece built on a ZM tile you could integrate it pretty well as a board centerpiece. 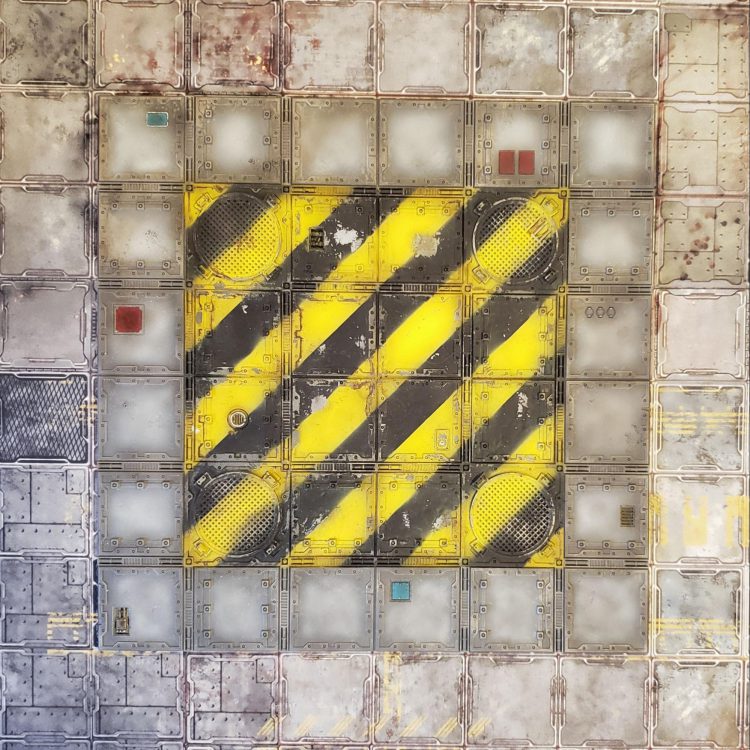 Pendulin: This is a high quality product made by a great company. I will unquestionably use this mat in my upcoming Kill Team games, and I’m eager to see what new designs they put out. The missing half inch, lack of a carrying bag, and expensive price tag are concerns to keep in mind, but the image quality, vibrancy, and crisp edges definitely stand out on the table and make the battlefield pop.

Kevin Genson: I can’t emphasize enough just how good the printing looks. It’s significantly richer than the FLG and F.A.T. mats that I have, and it looks amazing on the table top. It’s motivated me to try and get some Sector Mechanicus terrain painted up to do it justice. The challenge for me is the price. Skirmish Mats are currently priced at $60 with no carrying case, and competitors offer the same size with a case for $40. Move up to larger games the price disparity gets even worse, particularly since Skirmish Mats doesn’t make any products larger than 44” x 30”. I would probably be willing to pay an extra 10% for the superior image quality (seriously it’s that good), but for a 50% price increase I would expect the size and image alignment to be perfect.

Kevin Fowler: For less than the price of a single set of ZM tiles (if you can even find them!) you can get a high quality mat that covers a 3×3 space, and isn’t a million decibels when you roll dice on it. While I would love for there to be a case included, I still think this is an amazing pick up if you are looking for a Necromunda play surface that doesn’t involve eBay scalping and painting. Looking forward to future designs from Skirmish Mats, especially on the fantasy side of the house.

Have any questions or feedback? Drop us a note in the comments below or email us at contact@goonhammer.com. You can buy Skirmish Mats from their website.