This week’s Hammer of Math follows our extensive coverage of the brand new Codex: Aeldari and focuses on the Strands of Fate and Luck of the Laughing God dice modification abilities.

Warhammer 40,000 has always been Space Fantasy, and as such one must have Space Elves to go with the Space Orks . As befitting the role of Space Elf, the Aeldari (previously Eldar, although I suppose that wasn’t as easy to copyright) are characteristically lithe, dangerous, and arrogant. That arrogance reached a peak when the Aeldari descended into a nightmare of debauchery and hedonism that destroyed most of their race and spawned the Chaos God Slaanesh. See kids? Don’t do drugs. You might just birth the God of Excess and condemn your race to damnation. On the table Aeldari are fast, lethal, and full of so many tricks that an unfamiliar player may simply shrug and chalk it all up to the “elf bullshit” that is also characteristic of any pointy-eared fantasy race. The new book is very good and Aeldari players should be excited.

In the 40k lore the three most prevalent varieties (or as Slaanesh sees them, flavors) are the Asuryani (Craftworlds Aeldari), the Drukhari (formerly Dark Eldar aka the Bad Elves), and Harlequins. Drukhari have been around for quite some time and have consistently had a very effective set of options, and with the new book the Craftworlds and Harlequins catch up. Both feature fate-altering means of modifying dice rolls. Craftwards Aeldari have access to Strands of Fate, which is a dice replacement mechanic that allows you to treat certain D6 rolls as unmodified sixes. Harlequins get Luck of the Laughing God, which is a set of round-based re-rolls that includes a gambling mechanic if players want to get more.

If every unit in the army meets certain qualifications (specifically all ASURYANI from the same craftworld, ANHRATHE, or UNALIGNED) the at the start of each round the Aeldari player can roll a number of D6 based on the size of the battle. Each result allows the player to manipulate a different type of roll based on the number on the D6; Advance roll, charge roll, Psychic Test, hit roll, wound roll, or saving throw. If the player chooses to manipulate a roll, then the player does not roll one D6 and instead treats that result as an unmodified 6. So in the case of single D6 rolls this means the player rolls nothing; they automatically get the unmodified 6. In the case of multiple D6 rolls (Charge and Psychic tests) the player rolls a single D6 and then adds 6 to it. 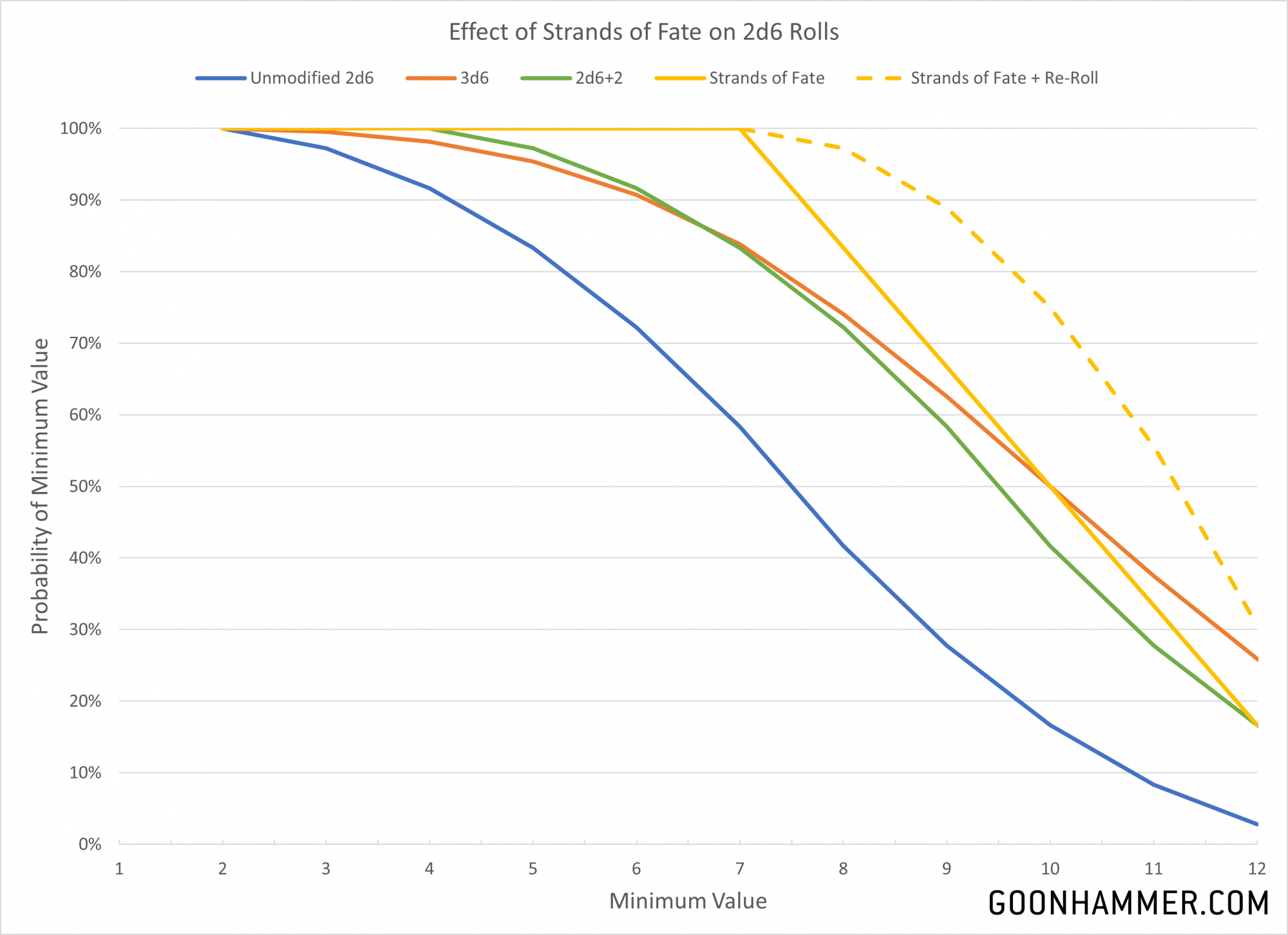 For the single D6 roll the result is pretty simple; you automatically get an unmodified 6. For 2D6 rolls the floor becomes 7 instead of 2, making it extremely useful for critical tests or charges from deep strike. From the chart above we see that Strands of Fate immediately makes the roll more reliable than even 3d6 for less than 10, and with a re-roll incorporated it is simply the most reliable mechanic in the game.

Assuming you get it.

The chart above shows the probability of getting at least the desired number of Strands of Fate dice to show up with your desired result. With six dice you have a 2 in 3 chance of getting at least one result. Start using re-rolls courtesy of Farseers to get more attempts and the probability increases, but even if you bring six Farseers and re-roll every die there’s still a roughly 1 in 10 chance that your desired result won’t show up. The good news is that at least you’ll know in the Command phase.

Luck of the Laughing God

If every unit in the army has the HARLEQUIN keyword and is performing the same saedath (or is UNALIGNED) then the Aeldari player gains access to the Luck of the Laughing God ability. This ability grants the player with between 1 and 4 re-rolls each battle round. The number of re-rolls depends on the size of the battle. These re-rolls can be used on hit rolls, wound rolls, damage rolls, saving throws, or Advance rolls. The Aeldari player can also gain additional re-rolls by rolling up to six D6. If every value is unique then the player gains as many re-rolls as they rolled D6. If there is a match then they only get the guaranteed ones.

To figure out the probability that you’ll get the desired number of extra re-rolls, you can use the chart below. Up to 3 dice will get you extra re-rolls the majority of the time, but things get precarious from there. The probability of getting 5 unique values on 5 dice is roughly the same as an Aeldari player not getting the roll they want even with 6 re-rolls. Fate is fickle like that.

Aeldari players get access to a variety of powerful, dice altering mechanics which still contain an edge of risk. For Asuryani players the ability to guarantee an unmodified 6 on a critical charge or saving throw is huge, while Harlequin players can significantly impact the reliability of several of their rolls through their own army-wide mechanic. This new book is huge and this article just scratches the surface of the bonuses and abilities that the Aeldari now have access to.