Following up on our extensive coverage of the new Codex: Genestealer Cults, this week’s Hammer of Math takes a look at some of the core army abilities of the new book.

I’ve always had a soft spot for lost causes, particularly in the Warhammer 40,000 universe (so… basically the entire universe), but one lost cause that I particularly enjoy are the Genestealer Cults. Bands of people hope for a better life, latching on to the influence of the Hive Mind in the hopes of escaping the unrelenting terror of life in the 41st millennium. Unfortunately their fate is sealed as they are either captured by the forces of the Imperium, burned to a cinder when the planet is subjected to Exterminatus, or they “win” and end up as Tyranid kibble when the Hive Mind consumes the planet. This is definitely one of those situations where the journey is more important than the destination, because in this case the destination always sucks. Fortunately in this case the journey is fantastic. Genestealer Cults have access to a huge array of rules that provide a myriad of interesting effects, allowing players to evoke the feel of an insurgency while still having a chance.

One of the core abilities of the new Genestealer Cultists is called Crossfire, where your units get bonuses based on positioning and order of attack. Representing cultists coming from nowhere to surround and overwhelm the opponent, Crossfire is initiated when a unit with the CROSSFIRE keyword shoots at an enemy unit, and scores either 5 hits – or just one hit with a weapon of 2 or more Damage. At that point the target receives a crossfire marker and other CROSSFIRE units get a bonus when attacking them.

Modifiers are very powerful, and cumulative modifiers even more so because the effect is multiplicative. For example, a Neophyte Hybrid (BS 4+) firing a S4 weapon AP 0 weapon against a Space Marine with a 3+ armor save in cover has an 4.2% chance to deal damage. That same Neophyte firing against an Exposed Space Marine with a crossfire marker will deal damage 14.8% of the time, or 3.56 times more often. The chart below provides some details on the change in probability of the modifiers.

We can see the effects of these bonuses on the lines below. The solid lines represent the baseline minimum wounds dealt to a unit of T4/3+ targets in Light Cover by a unit of Neophyte Hybrids with an assortment of weapons as well as Acolyte Hybrids with hand flamers. The combination of increased hit, increased wound, and armor mitigation is significant. This can be improved even further through various re-roll bonuses such as those provided through the Cult Demagogue and Meticulous Planner abilities of a Primus. 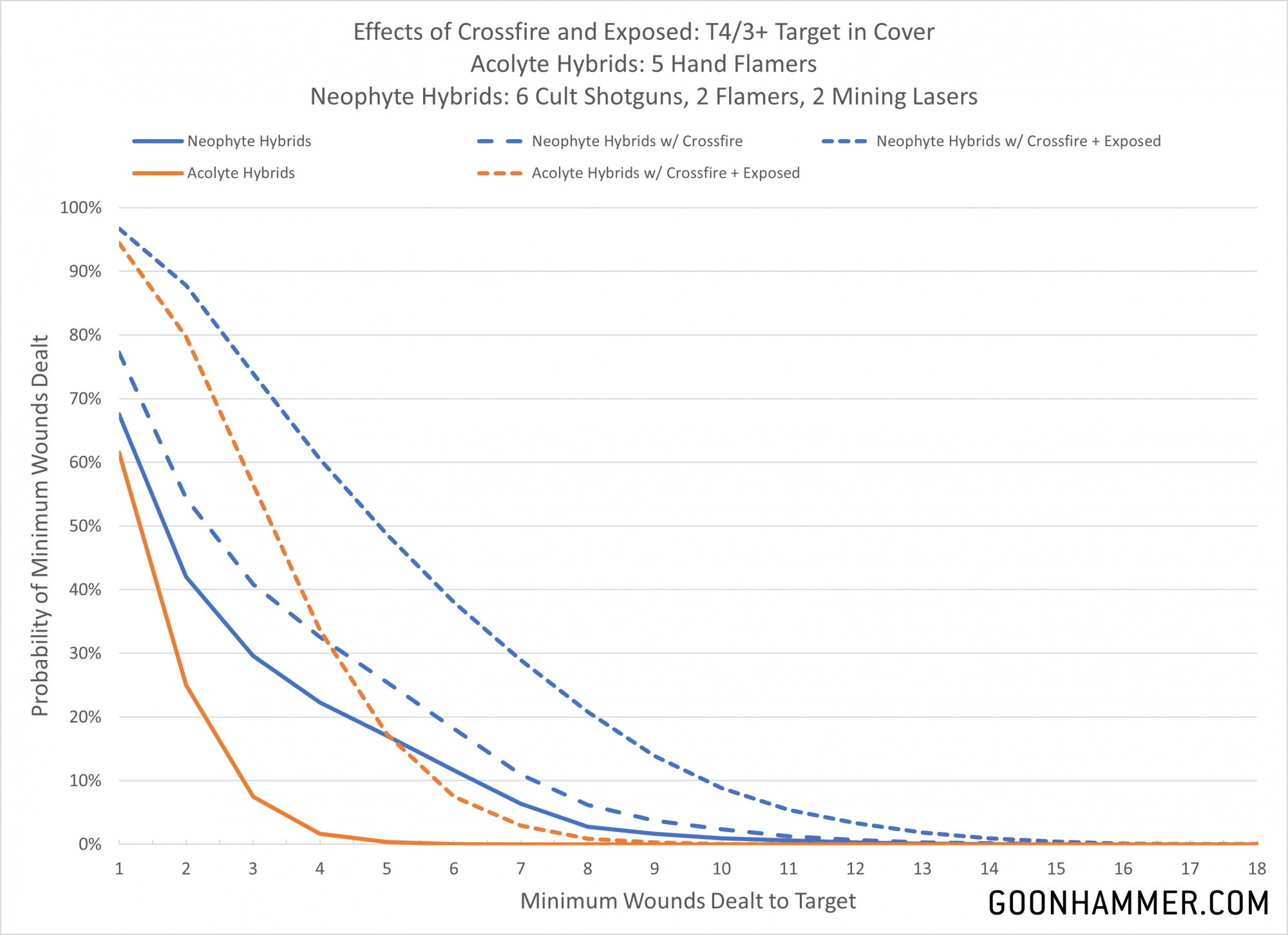 Summon the Cult and Acolyte Iconwards

Several units have access to an ability called Summon the Cult where either D3 or (in the case of Neophyte Hybrids) D6 destroyed models can be returned to the unit in the Command Phase. The ability can be used more than once (such as a unit with a cult icon in promixity to an Acolyte Iconward), but the effect is limited to returning no more than 3 or 6 models per unit per phase. The units that can benefit from this ability by purchasing a cult icon for 20 points are Acolyte Hybrids (9 points per model), Neophyte Hybrids (6 points per model), and Hybrid Metamorphs (12 points per model). The Acolyte Iconward costs 75 points and can allow CORE units within 6″ to summon the cult, but only the units that can get cult icons have that keyword.

On average a unit of Acolyte Hybrids will resurrect 18 points per turn, Neophyte Hybrids will resurrect 21 points, and Hybrid Metamorphs will average 24 points. Just getting to use the ability once per unit pays for the Icon, and any more than that is a net gain. This also means that an Acolyte Iconward can easily earn back its points if it’s in range of a few large units that will survive a turn or two. Whether you prefer Icons in the unit or the Iconward, or both, is up to you and your list design. It’s also worth noting that if the cult is Pauper Princes and the Acolyte Iconward carries the Reliquary of Saint Tenndarc to give CORE units within 6″ a 5+ invulnerable save then the chances of survival for your models go up dramatically, increasing the benefit of having one;, and Iconwards also can use the Sacred Cult Banner ability to give INFANTRY, CHARACTER, and BIKER units within 6″ a +1 bonus to charge rolls.

The Broodmind Discipline is a pretty interesting one, with only one power (Mass Hypnosis) at WC 7 and most of the effects having a fixed effect such as modifiers to attacks or hit rolls. One rather novel power is Mental Onslaught (WC 5) which has one of the most unique and complicated effects I have ever seen.

So what does all of this hassle give you? 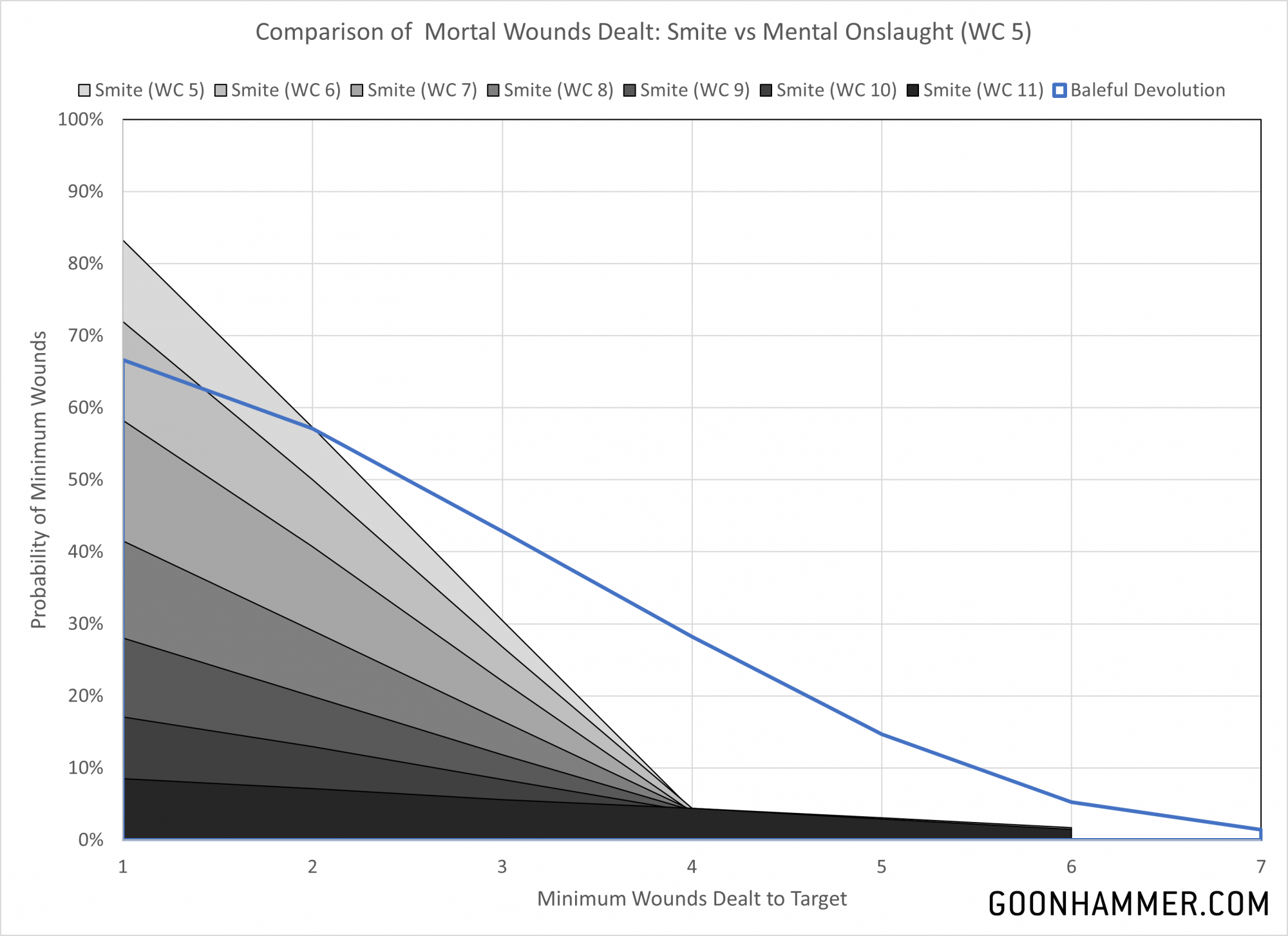 A hyper specific power which averages slightly more wounds than Smite assuming your target is a horde of single wound creatures. Given how good the other powers are I suspect this one will get skipped a lot.

Glory to the Emperor and All His Limbs

This book is cool. Genestealer Cults get access to a wide variety of interesting and fun abilities, and with proper positioning and execution you too can rise up against the oppressors and summon forth a new era of prosperity and free snacks. The idea of a horde of unwashed masses, rising up from nowhere to catch their foes in a crossfire while more and more fighters come from the shadows sounds really awesome.