Hammer of Math: Secondary Objectives, May 2022

Hello, Dear Reader! Primaris Kevin is off again, having overexerted himself yesterday. That means this week you get me, doing A Thing with a bunch of meta stats. In case you missed it, we’ve been hard at work revamping and relaunching the 40kstats website, and a big part of that work has been automating a ton of the work that was previously done manually each week by a single exhausted falcon. Something we haven’t put on the site yet but are working on is data around secondary objectives, so today we thought we’d take some time to do an update on secondary objectives and how those are shaking out.

The data in this analysis comes from the ITC Battles App, which is also now a part of Goonhammer, and it’s the premier app for tracking your games and stats. I cannot recommend it enough.

Scoring Since the Dataslate

Let’s start with the standard secondary objectives from the War Zone Nachmund: Grand Tournament Missions book. We had ample data to look at the secondaries last time around but now we can refine our look and just take the last month of data, starting from games happening after the April balance dataslate. At this point we’ve got just under 6,700 games worth of data in the sample, giving us a pretty solid look at how these secondary objectives have played out. 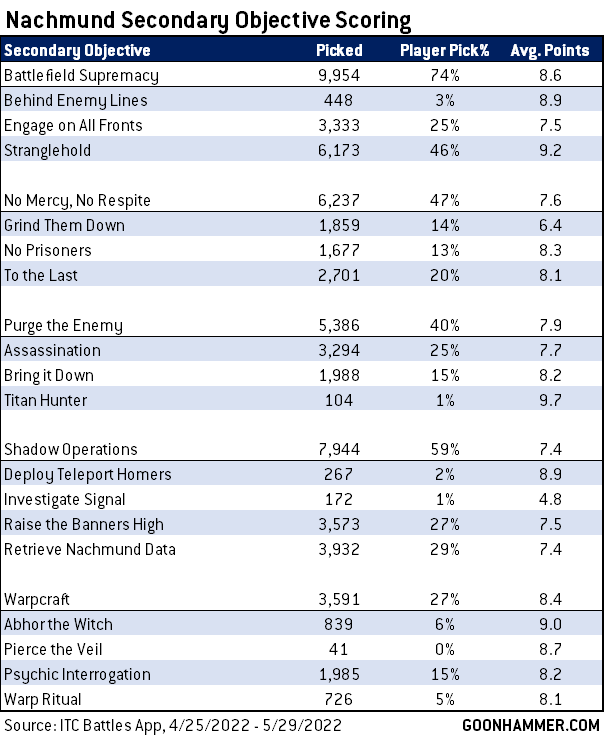 Overall, these have shifted a little since our last analysis, but only a few by what could be considered statistically significant amounts. Still, there are some shifts here that are worth noting:

Let’s move on to the faction secondaries. We’ve got some data now to look at Eldar, Harlequins, and Tyranids, and some early results for Knights. First however, let’s start by looking at the faction secondary objectives for Adeptus Custodes and T’au, the two dominant factions last time we did our analysis.

While there haven’t been enough GSC or Black Templar games to really dig into their secondaries post-dataslate, there are enough Custodes and T’au games to talk about those factions and how they’ve shifted since march. In particular, the Custodes have seen substantial (though directional) drops to their faction secondary scoring, particularly Auric Mortalis – again, they’ve gotten slightly worse at surviving and their opponents slightly tougher. Scoring also dropped for Stand Vigil, which again makes sense in the context of the faction losing ObSec on a number of units.

For the T’au, the story is a little more positive, where we saw small directional increases in scoring for Aerospace Targeting Relays and Decisive Action, neither of which has much to do with killing. Both seem relatively dependable, though situational, as options. 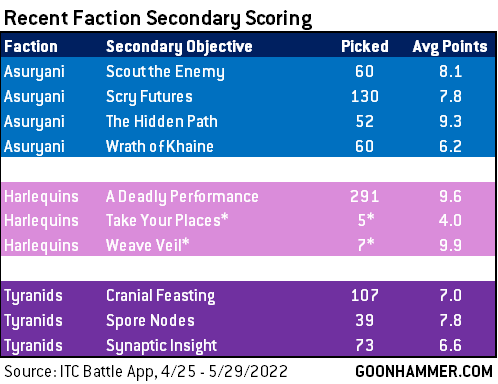 Scry Futures is the most commonly picked Craftworlds Secondary Objective, and it’s a fairly mundane pick with an average score of 7.8 VP, just below that 8.0 average we observed for generic secondary objectives. Though picked much less often, The Hidden Path and Scout the Enemy tend to provide comparable or better results, though they require a concerted effort to build around them.

Finally for Tyranids the options are just OK, though it turns out the faction doesn’t really need a secondary objective to score – the army is well made to score the game’s generic Secondary Objectives.

We don’t have a ton of data on knights yet but what we can say is that Yield No Ground for Imperial Knights continues to be great – the secondary is worth an average of more than 11 VP.

One more thing to look at before we go, and that’s the game’s top secondaries. Remember that 8 VP average up top? Well that’s useful here – we can basically call anything averaging over 8 VP above average in that regard, or a “good secondary”. This isn’t to say that your best pick will always net you 8+ points, but that generally you want to pick secondaries that average 8+ over ones that don’t, unless the circumstances call for it, such as in the 1% of games where Titan Hunter is better than Bring it Down. 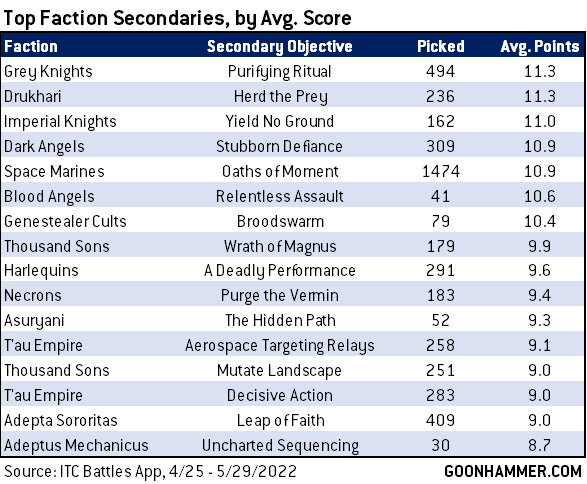 We’ve made the cutoff 30 games here, but if you wanted to make it 50 all you’d lose are Relentless Assault and Uncharted Sequencing. The former is easily replaced with Oaths of Moment for Blood Angels anyways. There are some old mainstays here – Purifying Ritual remains the games most powerful secondary objective, while Herd the Prey likely continues to help keep Drukhari afloat despite four rounds of nerfs. The new challenger on this list is Yield No Ground, which was already showing up in our March analysis as a top secondary objective (avg: 10.4) and will likely continue to be among the game’s top secondaries now that Knights have a new Codex. The challenge remains that as a Battlefield Supremacy pick, it’s not providing quite as much excess value as Purifying Ritual.

Not quite on this list but not low enough to be called bad are both Ork Secondaries, Stomp Em Good (7.3) and Get Da Good Bitz (7.0), along with the Death Guard’s Spread the Sickness (7.3). And Scry Futures, Auric Mortalis, and Stand Vigil also fall into this category, as we saw above.

So if those are the top picks, what are the “traps,” i.e. the faction secondaries that people take but consistently yield subpar results? Well, let’s look at the secondary objectives that players take often, but which average fewer than 7 points per game.

As a Death Guard player I can tell you that I’ve known Despoiled Ground was a trap pick for more than a year now, but some of the others are a bit more surprising. For the Emperor is right on the borderline here, but it’s also a replacement for the kill secondaries, which can be very difficult to score against many lists. That makes it more useful than say, The Long War, which has to compete with To the Last and No Prisoners, though it’s likely a bitter pick for CSM than Grind Them Down.

There weren’t too many surprises here overall, save for Grind Them Down – in the new post-Armour of Contempt world there’s even less reason to take it in most games and it just exposes you to far too much risk to outweigh the downsides, particularly when a bad turn on your end or a good turn on the opponent’s can mean a 3 VP swing.

Something we’ll need to dive into soon is the category choices and how they affect scoring – often when it comes to picking secondaries the mid-tier armies have one great choice, one OK choice, and then have to depend on an opponent’s list providing a kill secondary as a third choice. One thing that can elevate the game’s better factions is having a faction secondary that can replace that, such as what Purifying Ritual does for the Grey Knights, or how Wrath of Magnus helps Thousand Sons in certain matchups.

One thing the next mission pack promises is an overhaul to faction secondaries. It will be interesting to see how GW adjust these. At this point we’ve got at least one option for every faction in the game, though they’re clearly not created equal. While we expect point updates to improve/nerf many of the game’s factions in the next month or two, it would also be good to see some of the weaker faction secondaries get a rework, while some of the stronger ones get pruned back a bit.