With the release of the new Codex: Adeptus Mechanicus we’re taking a step away from looking at Raiders to look at some of the options behind what we think will be the CORE of any AdMech force; tons of Skitarii. We here at Goonhammer would like to apologize for the delay in releasing this article; the Codex broke our spreadsheet.

The Skitarii are the core troops of the Adeptus Mechanicus; cybernetically enhanced humans that have been reforged and rewired into the perfect killing machines. With mathematical precision they follow the directives of Tech Priests who view them as particularly capable (and expendable) tools. With the release of the new Codex Games Workshop the potential exists for Skitarii to truly be viewed as the lethal, fragile, expendable killing machines that they are. The baseline model is 8 points with a profile of BS 3+, T3, 1W, and a 4+/6++ save profile. Rangers are equipped with the galvanic rifle, a 30″ range Heavy 2 weapon with S4, AP -1, and D1. They also have the ability to make a 3″ Normal Move in the first round. Vanguard are equipped with radium carbines, 18″ Assault 3 weapons at S3, AP 0, and D1 which automatically would non-VEHICLE units on an unmodified hit roll of 6. What makes them particularly nasty is that you can take 20 of them in a single unit now. Behold the onset of the cybernetic horde.

Both Rangers and Vanguard have multiple options to change their profiles; this book is incredibly deep.

As you can tell the number of possible combinations is incredible, and that doesn’t include the bonuses specific to each type.

In addition to what was listed above, Skitarii Rangers have access to to the Galvanic Volley Fire Stratagem, which costs 2CP but makes each galvanic rifle Rapid Fire 2. Yes, that means that you can potentially get 80 shots. Yes, this is going to be brutal when we look at how nasty things can be. For now let’s take a look at the influence of various Forgeworlds, with the relevant ones being a Reignited Forgeworld and Agripinaa at half range. Both affect armour saves, but Agripinaa is constant when applied at half range and given the prevalence of short boards and range extending options available to Mechanicus factions it should definitely be under consideration. 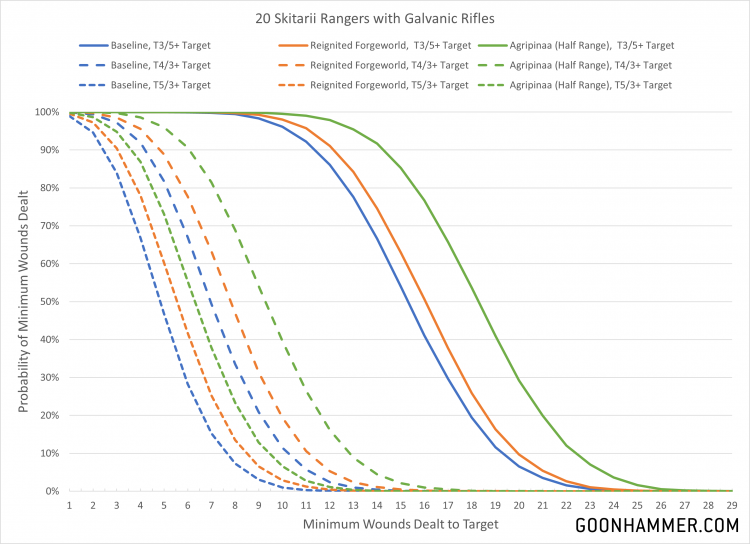 Another thing to consider are some of the effects of different bonuses offered by Holy Orders and aura effects such as re-rolling 1s to hit and wound via a Warden equipped with Exemplar’s Eternity. 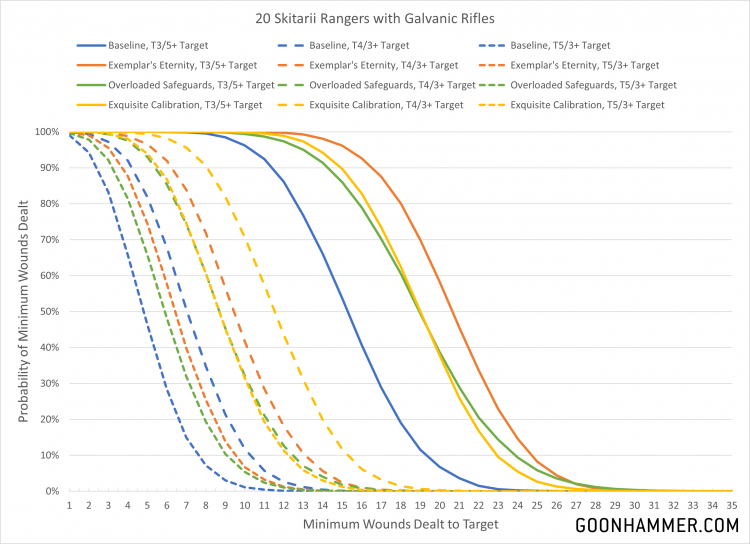 Where the Rangers have long range galvanic rifles, the radium carbines equipped by the Vanguard give them a few more options thanks to the fact that they are armed with radium weapons.

In terms of Forgeworld specific bonuses in addition to the Reignited Forgeworld and Agripinaa, the Irradiated Forgeworld option with Scarifying Weaponry looks pretty nasty. 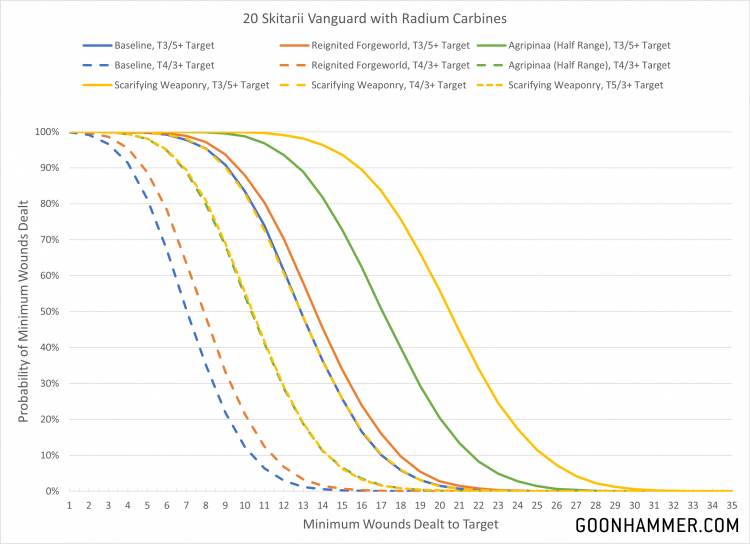 In terms of auras and Holy Order abilities we see how Overloaded Safeguards provides a significant bonus thanks to the baseline of a large number of shots, equivalent to re-rolling hit and wound rolls of 1 since the bonus attacks automatically hit. The fact that Protector Imperative and Exemplar’s Eternity can affect more than one unit makes them extremely powerful. 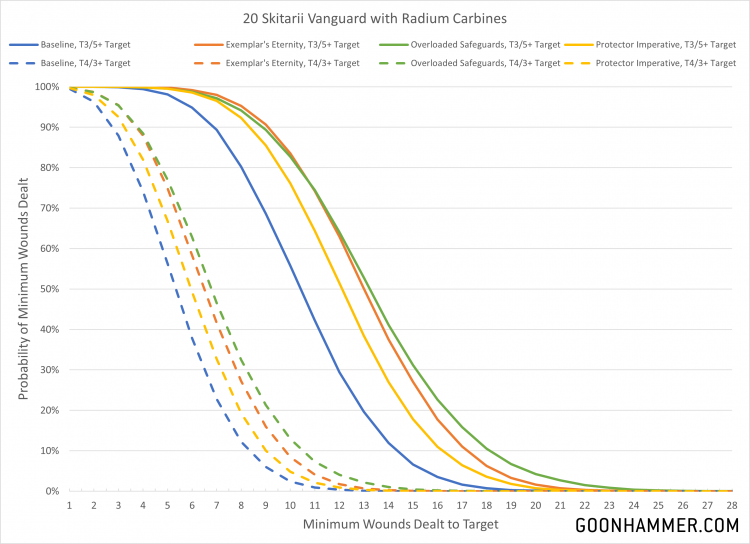 Finally we have the influence of Enriched Rounds, with targets that force a 4+, 5+, and 6+ wound roll. This ability has a huge impact against any kind of large MONSTER or other tough non-VEHICLE unit. Going from an attack which has to hit and then roll a 6 to wound to 50% of your attacks bypassing the wound roll entirely is incredible. 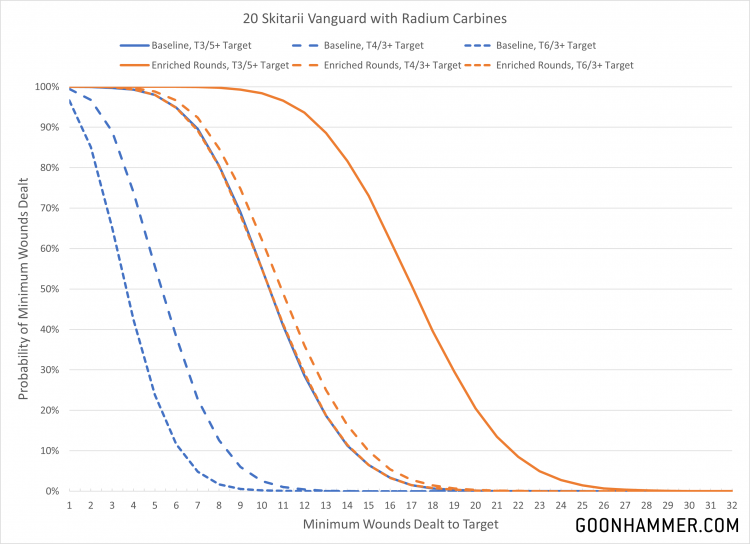 Yes, But Can They Kill a Primarch?

Mortarion is basically the poster child for incredibly hard to kill things, with a T8/3+/4++/5+++ profile with his Warlord Traits and 18 wounds of resilient fury. Miasma of Pestilence is almost certain to be active to impose a -1 to hit penalty as well. So with that in mind, how much damage can 160 points worth of cyborg warriors do the epitome of the Emperor’s genius and favored son of the Plague God himself? Well for this we’ll look at three scenarios. The first is the best possible configuration for Rangers, with 20 galvanic rifles firing 80 shots at S5 with hit and wound rolls of 1 being re-rolled and every unmodified hit roll of 6 generating an extra attack. The second applies every possible bonus to 20 radium carbines, with 60 shots at S5 and AP -1 getting the same extra hits AND automatically wounding on a hit roll of 4 or higher. The final curve is a slightly more sane combination that might be seen on a Lucius unit where a Tech Priest Manipulus applies Galvanic Field and Overloaded Safeguards before a Skitarii Marshal equipped with The Solar Flare relocates them into firing position.

As for the answer? Yes they can… if they’re lucky. The boosted Rangers don’t have much luck due to still needing to successfully wound him, but the Vanguard have a 35% chance if every possible enhancement is applied. Where things get interesting is with the slightly boosted Vanguard dropping in nearby; 5% of the time they can kill Mortarion on their own and with just a little bit of help from other attacks their chances of success increase significantly. 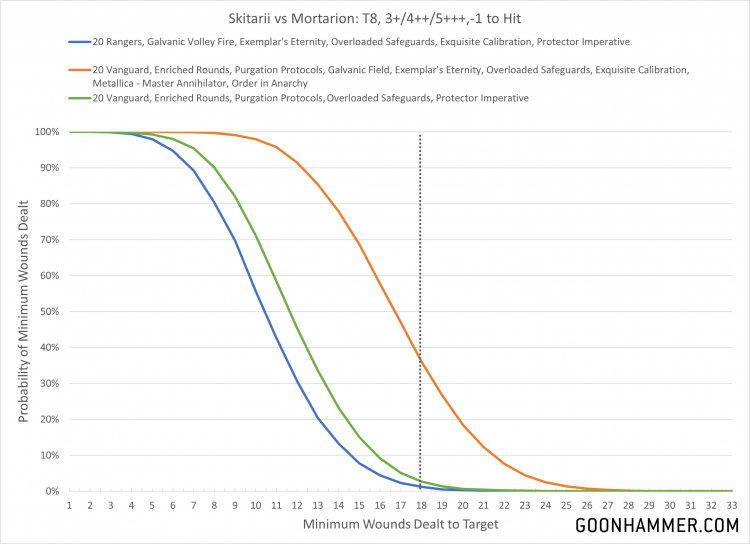 This is just the beginning of the complexity that Games Workshop has unleashed with the new book. Mechanicus players now have access to a very well costed troop choice that can provide a LOT of lethality, especially when combined with the really effective bonuses available via characters and effects. Whether or not the complexity and potential plays out in the battlefield remains to be seen.